While we are here on Hvar, we got news from Tyler and Lara about what's happening in their family back home in Ostrava. 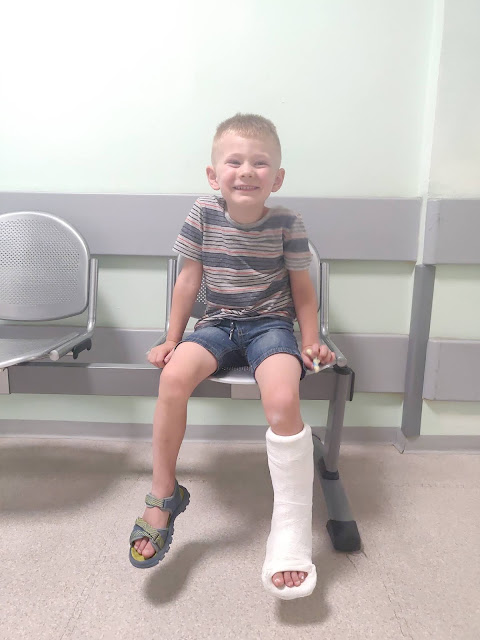 Judah jumped off some play equipment yesterday and broke his foot. 😬 😪So he's now in a cast for at least a month.

But they said he's been so brave! Judah himself sent me a video explaining what had happened to him, which I won't put in here, but will give some highlights!

"I was jumping off the dyno and I broke my little bone in my foot. I needed to go to the hospital and get...what did I get dad?...oh yeah, a cast. And they gave me toys! They also gave me a girl smurf too. I came home and I ate dinner but Asher already ate and after we ate, we got ice cream!"

But he then went on to say, "I'll have it for a week and then they're going to put a lighter scab on me!"

The hope is that he will get a lighter cast eventually, and then a boot to be able to walk around in.

Although I've never had a broken bone, every one of my kids broke a bone sometime in their childhood, and lived to tell a tale about it! This will be Judah's tale to tell someday. 😁
Posted by Living By Lysa at 11:30 PM