Finally Together: A Reunion 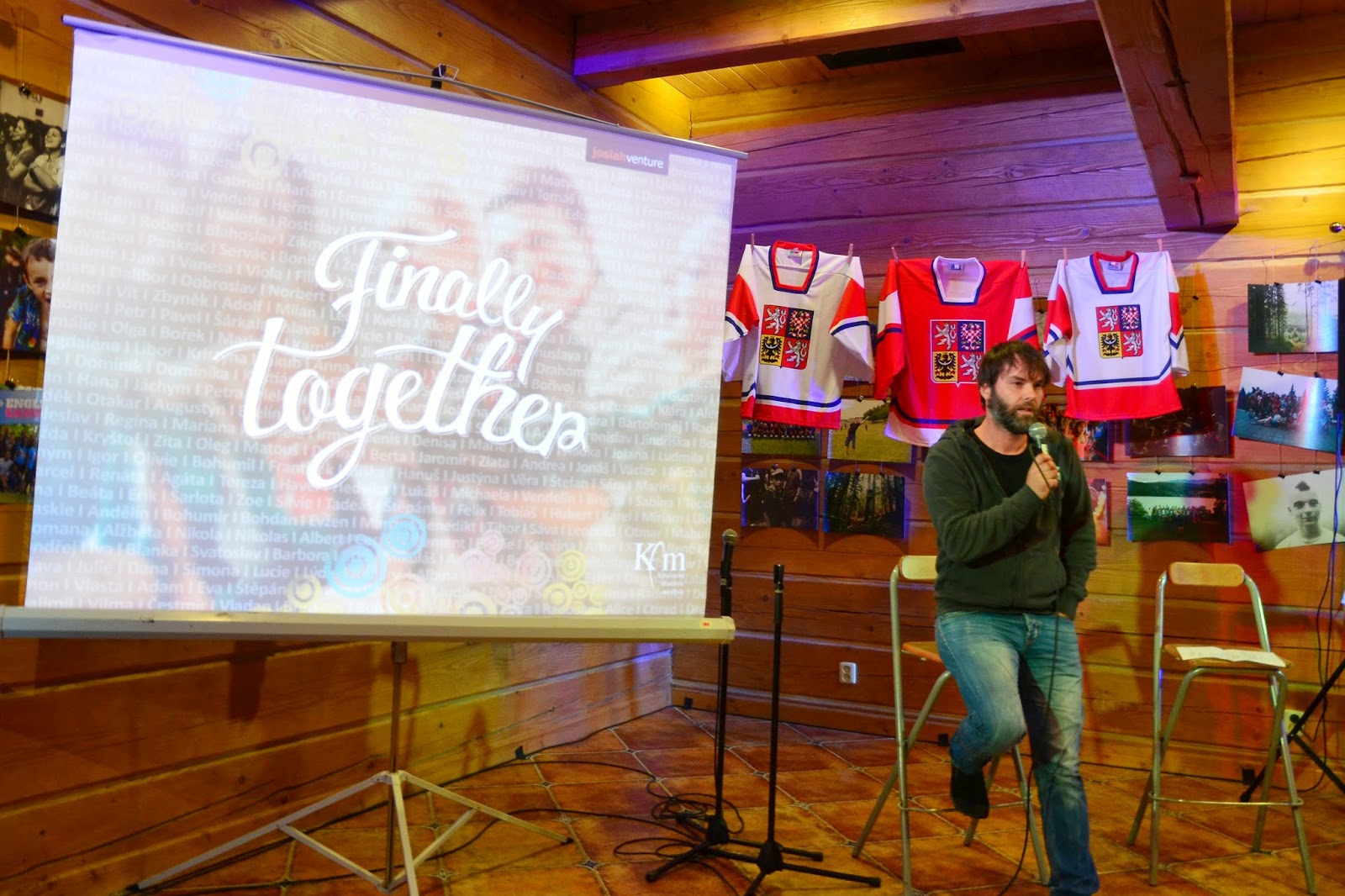 "Finally Together" marked an incredibly meaningful gathering to celebrate 18 years of the internship program here in the Czech Republic.

What began in our garage all those years ago in Havirov, became something that has touched hundreds of lives who personally attended the year long program, though in reality it's more likely touched tens of thousands of lives across the country as those young leaders have gone on to minister to people throughout the country and abroad.

Dave told the story of how it began: a conversation between he and I as we drove across the country dreaming of how to raise up a generation of new leaders here. The Lord gave Dave the idea to start a small year-long program that first began with just eight students. 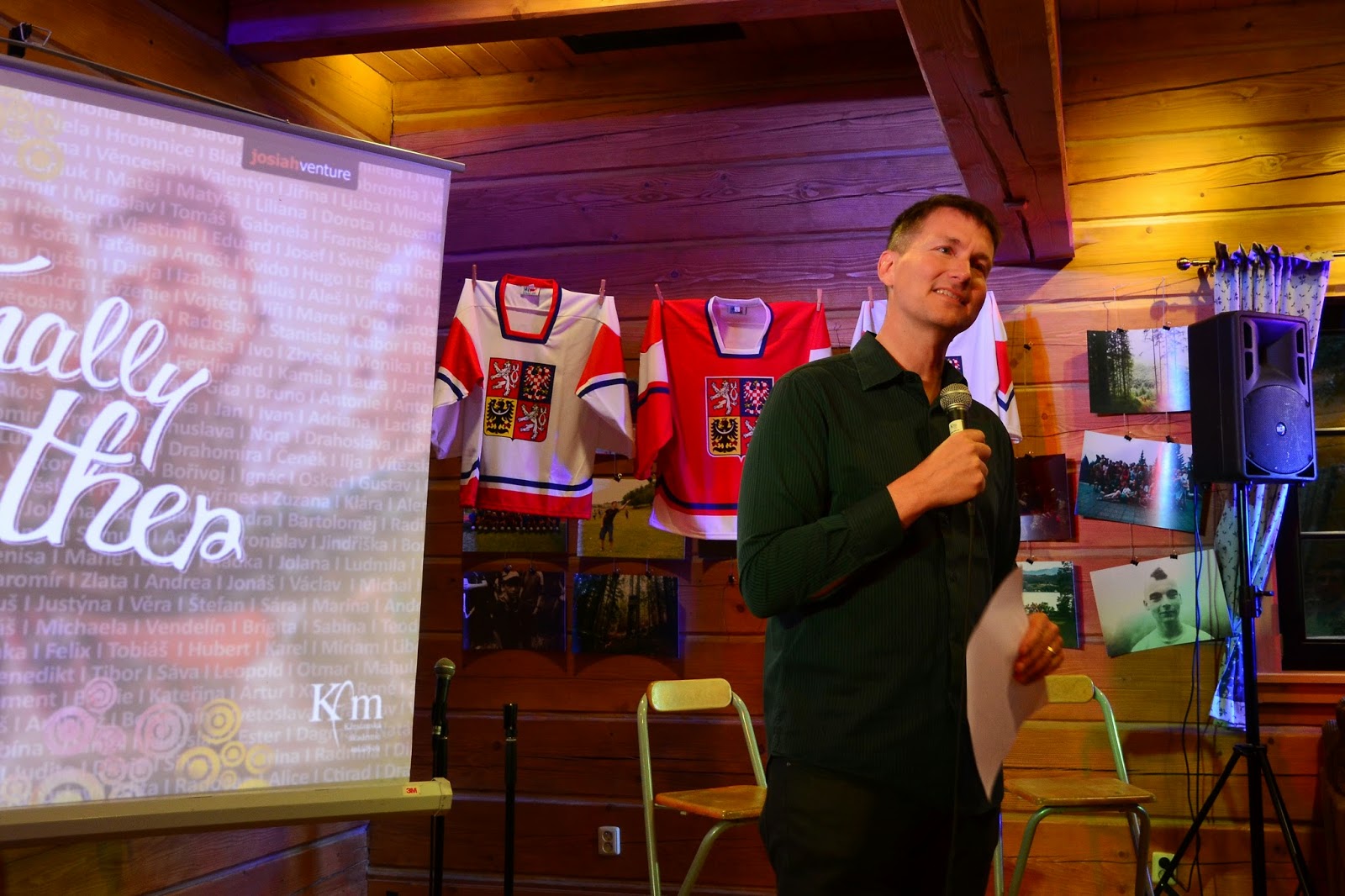 Three students from that original class were in the lodge at Malenovice that night, and one of them who was sick at home, Petr Hust, Skyped in (is that a word?!) from Vsetin to share his story of ministry over the past 18 years.

So powerful! How I loved seeing and hearing Petr, even from afar! 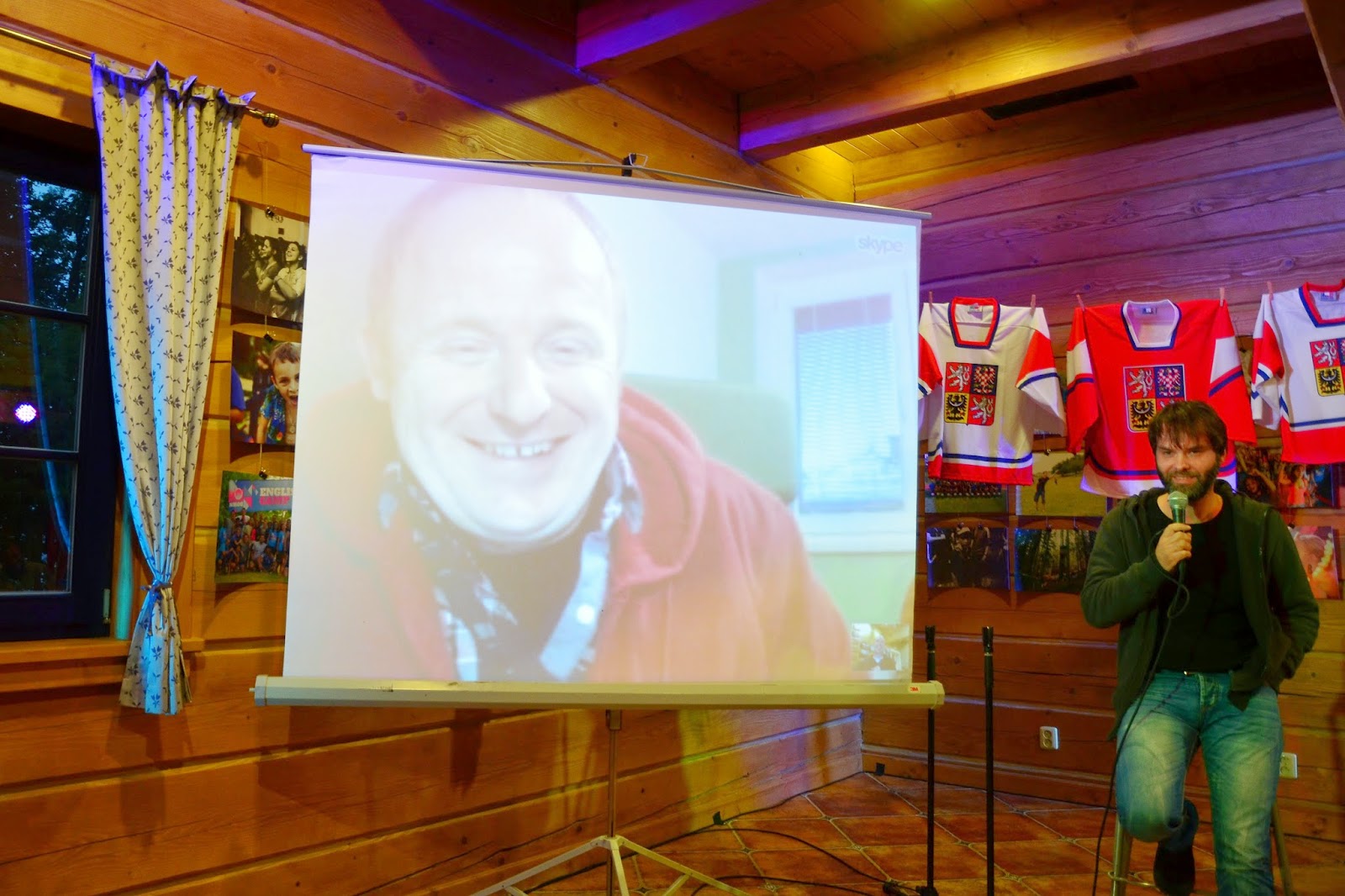 Many were called to the front to be interviewed; coaches, such as Miriam, and students such as Zuzka shared their stories as well. 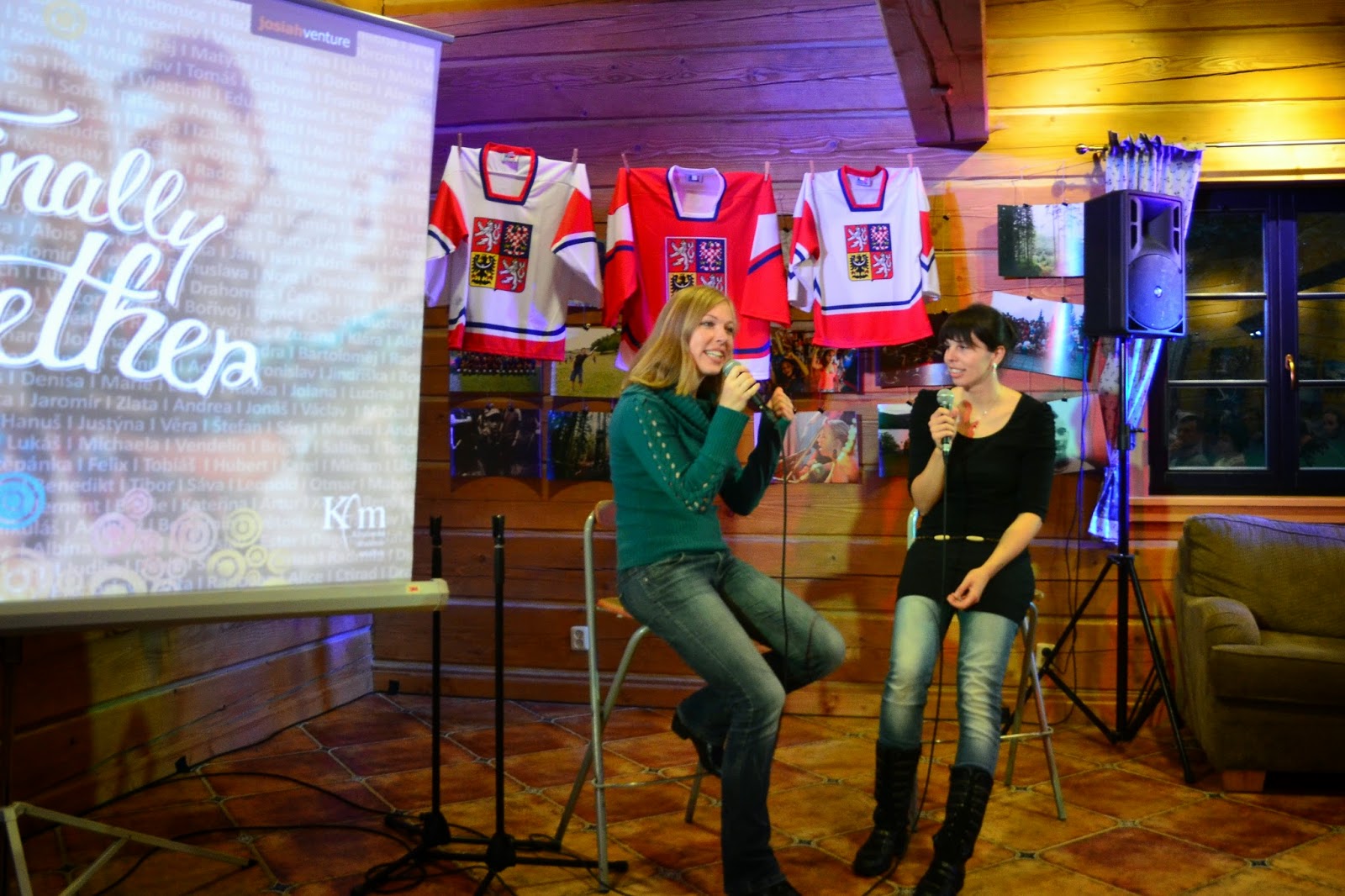 These two were both in the program, but in different years. Yet God eventually brought their paths together and they married just a few months ago! 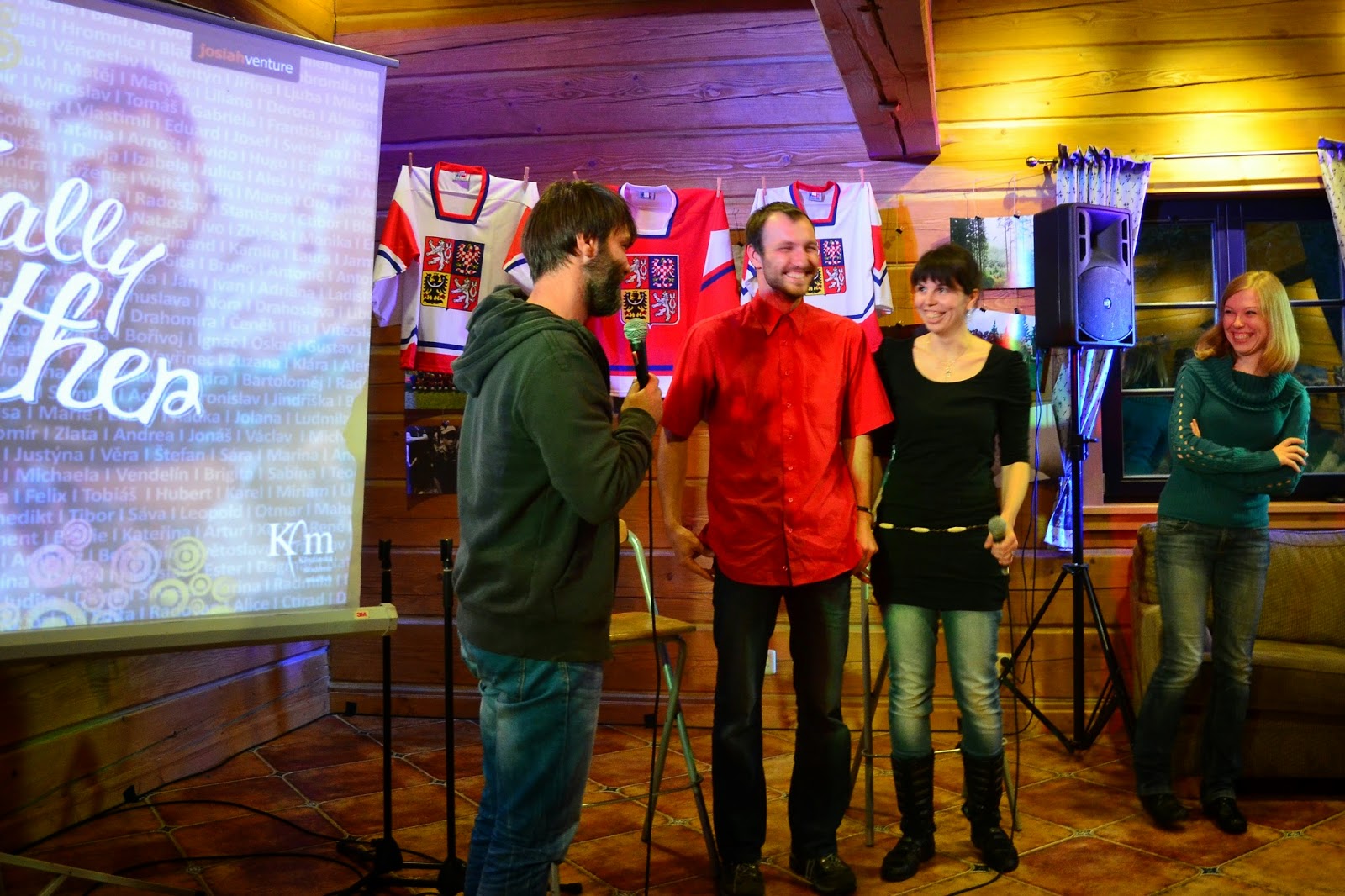 Ondra was in kindergarten with our son, Tyler, twenty years ago in Havirov. What a delight to see him, a godly and passionate young man, sharing his story of being in the internship program just a few years ago, and how God is leading him to plant a new type of ministry: an evening service for 60-80 young people who show up regularly. He's already seeing people put their faith in Jesus. 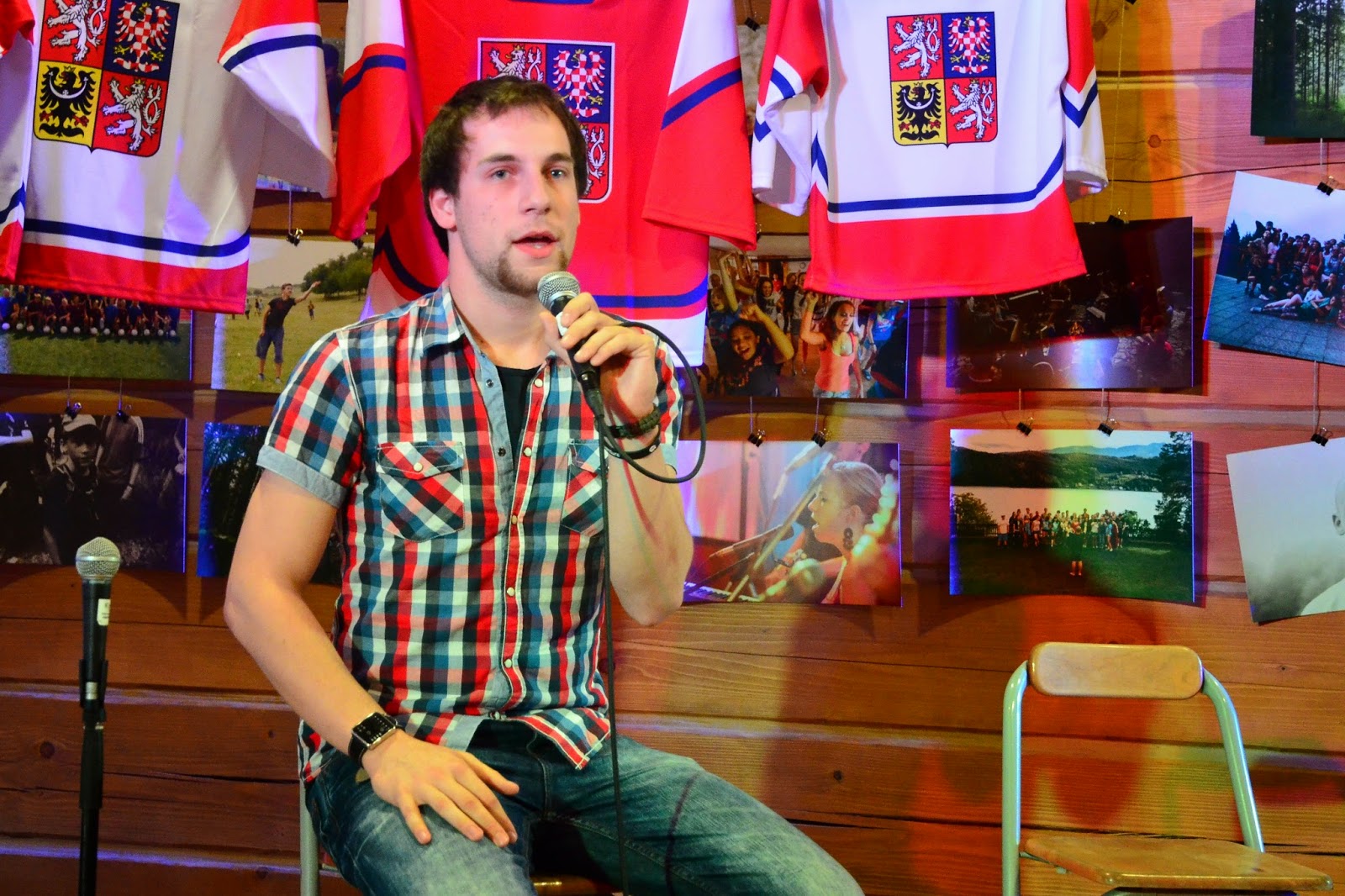 One of our heart's desires is to see disciples who make disciples. What is so remarkable about this photo is that it's a three generation fulfillment of that desire!

Miram coached Zuzka who is now mentoring this young man in the Fusion ministry she's a part of (she serves on our international team with JV). 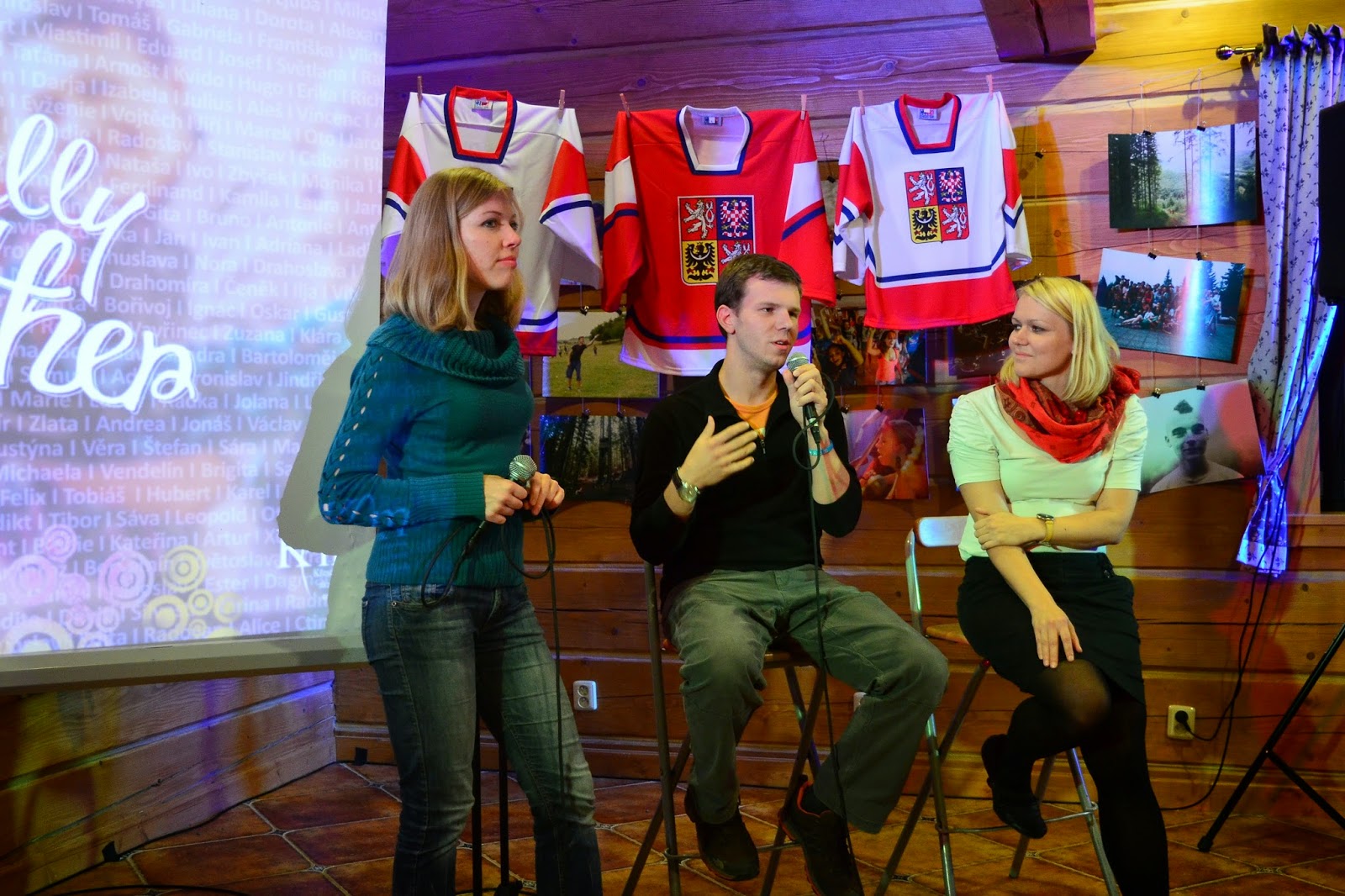 Dave and I sat with Lucie over dinner later on that evening. She is special to us in so many ways!

Years ago she was Dave's secretary, then met one of our single JV American missionaries and fell in love. Dave performed their wedding on Valentine's Day years ago and she and her husband are still with us in JV today! 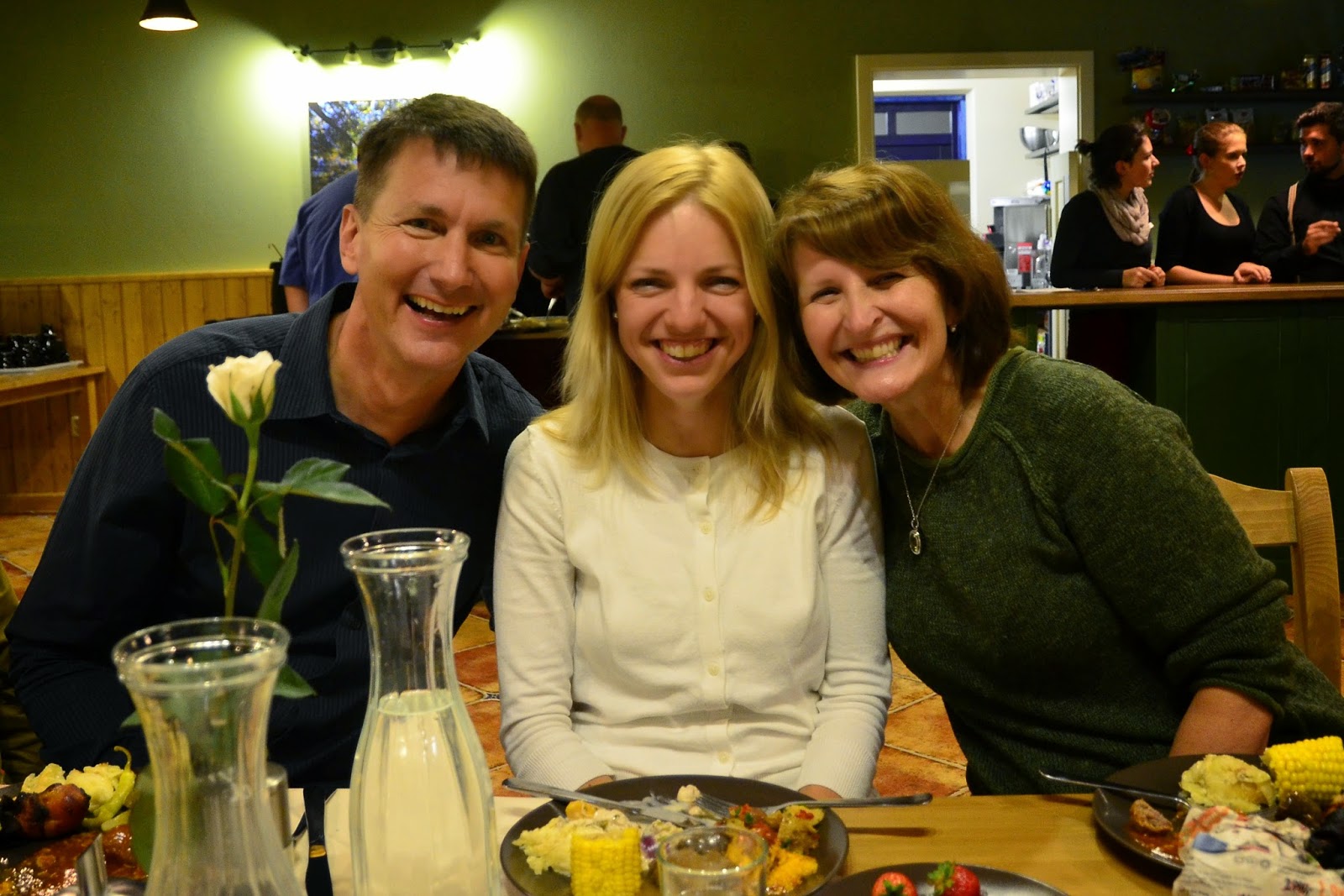 Back over at the lodge after an amazing meal prepared by our Malenovice staff, we continued to hear stories of God's work in the lives of interns over the years, including Dan Hurta who was in the first class! He has such a heart for the Lord which has resulted in the planting of three churches these past 10 years. 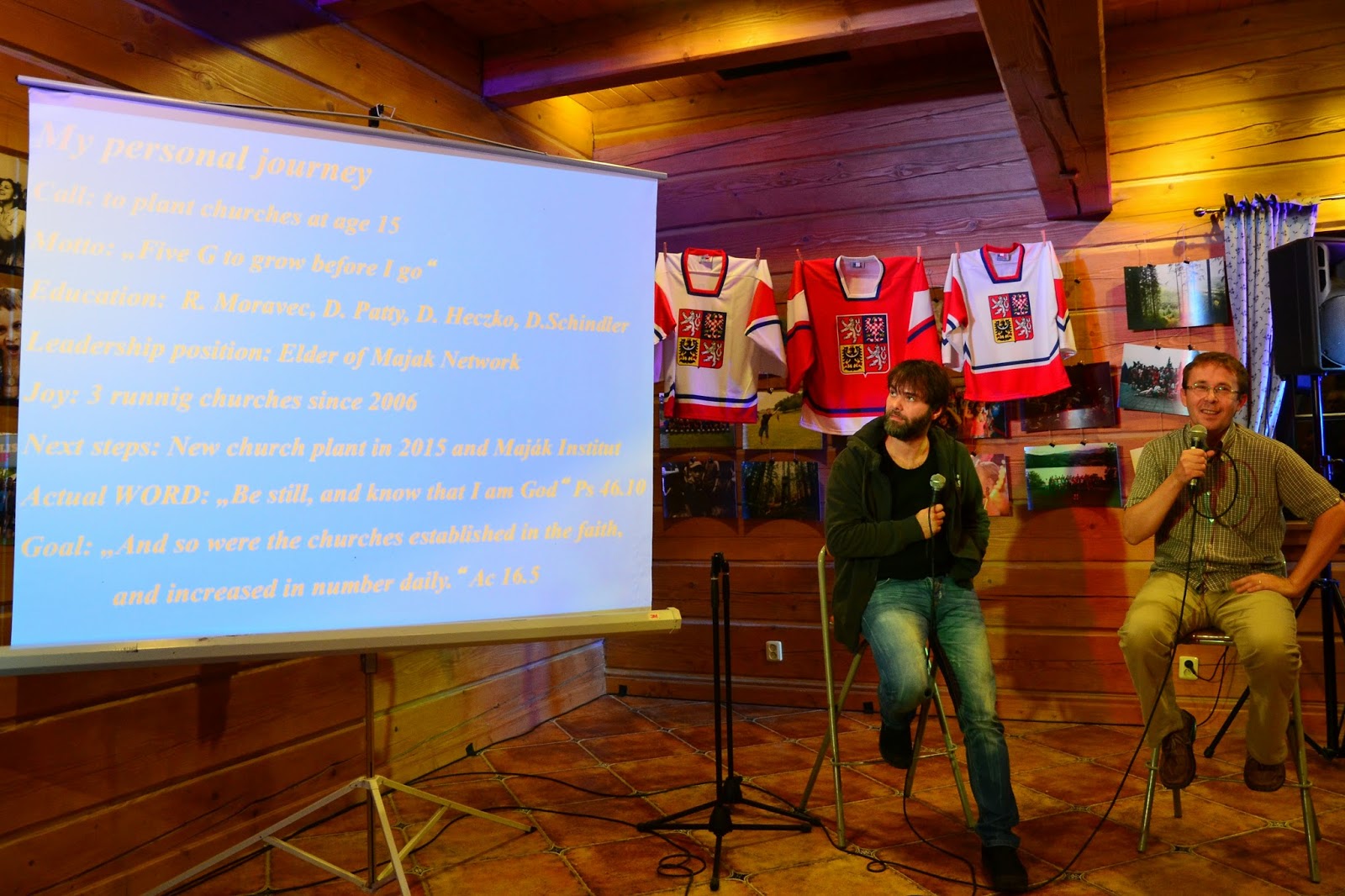 And finally, Milan Szturc shared his vision for a development out of our Fusion ministry which he leads here in Czech: he is praying that God will raise up a new generation of Czech worship leaders and song writers to share the Gospel in relevant ways with young people.

I get so excited about this!! 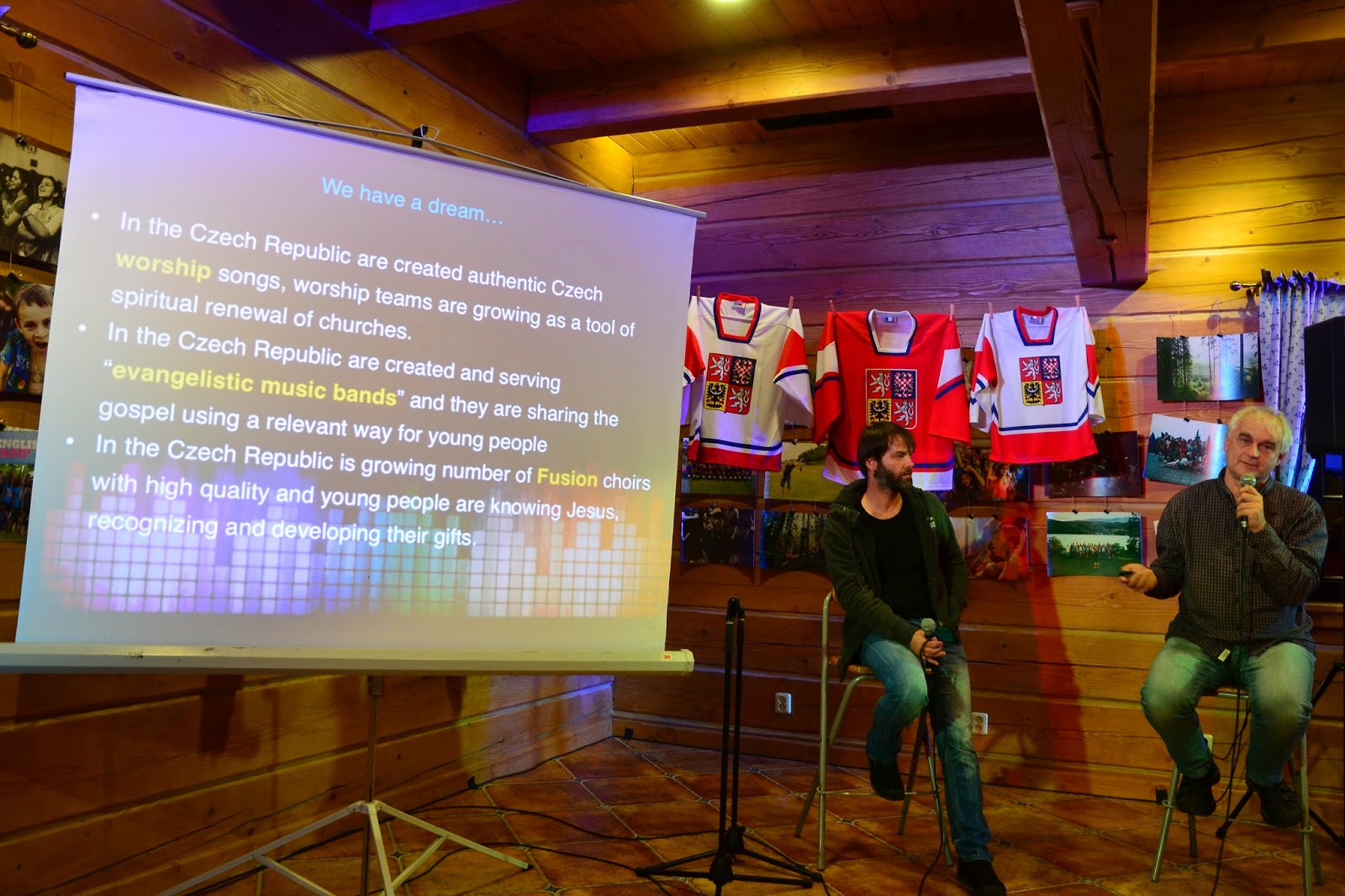 While a reunion is always special, this one had a special purpose: to thank a family in the States who has made the internship possible for these past 18 years.

Our dear friends from Florida came not only to celebrate JV's 20th anniversary, but to share in the joy of hearing how God has used their investment to reach thousands with the Gospel across the Czech Republic. 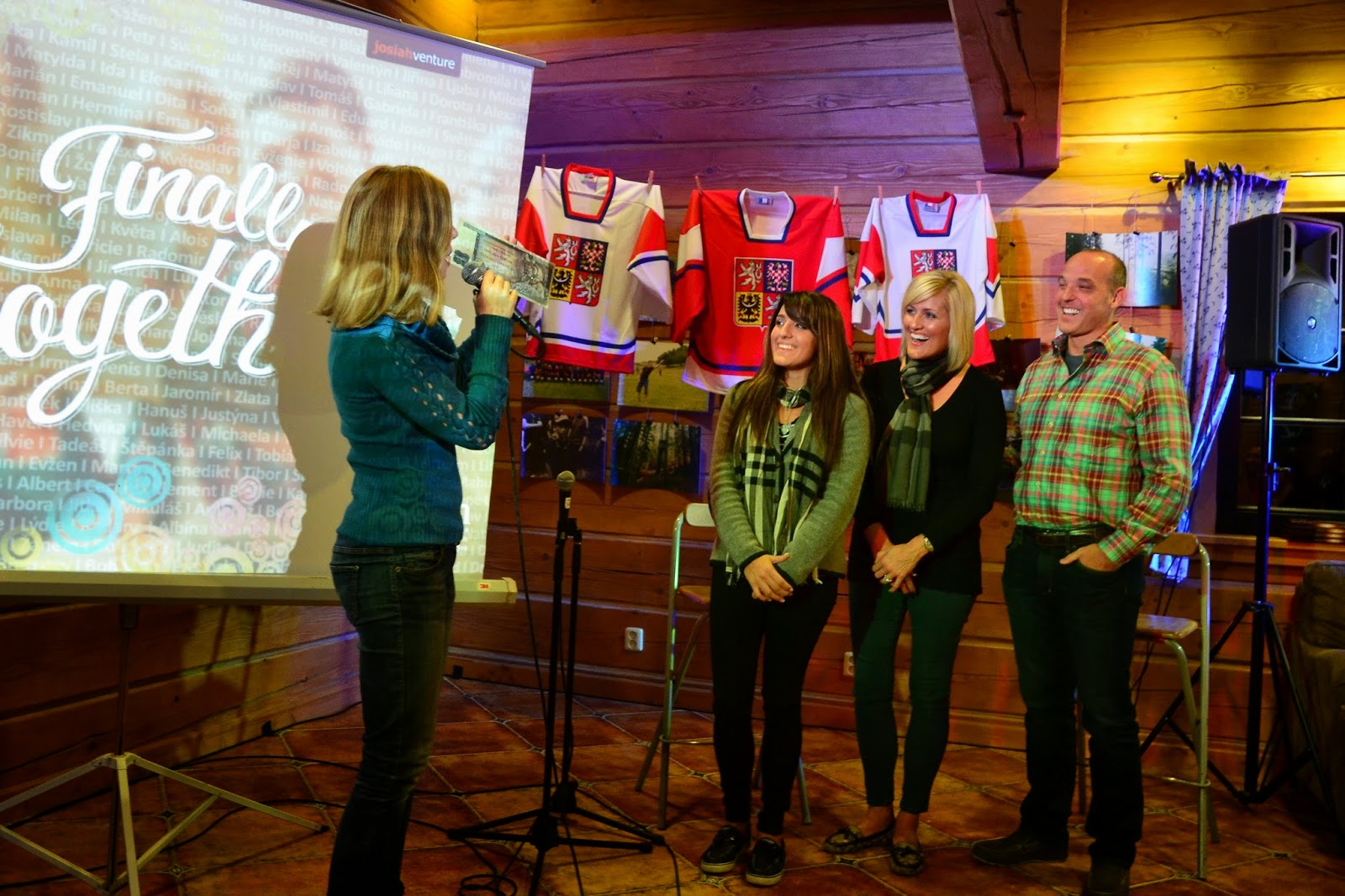 Czech hockey jerseys were given to them in thanks for their partnership, investment, love and care for the hundreds of students who have attended the program. 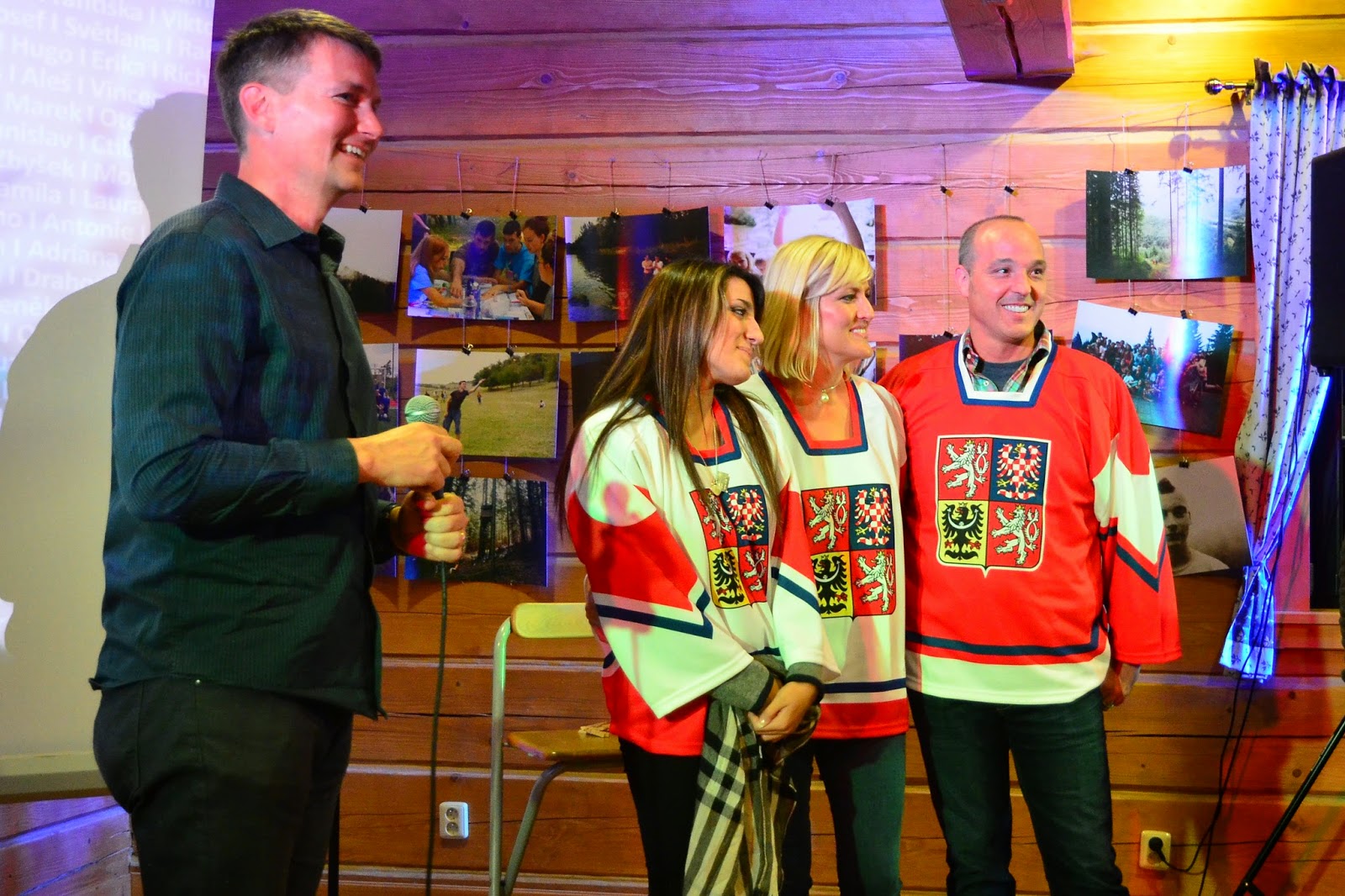 The leader of the internship program today, Tomas, as well as our Czech country leader, Milan, came beside them to pray for and thank God for these dear ones. 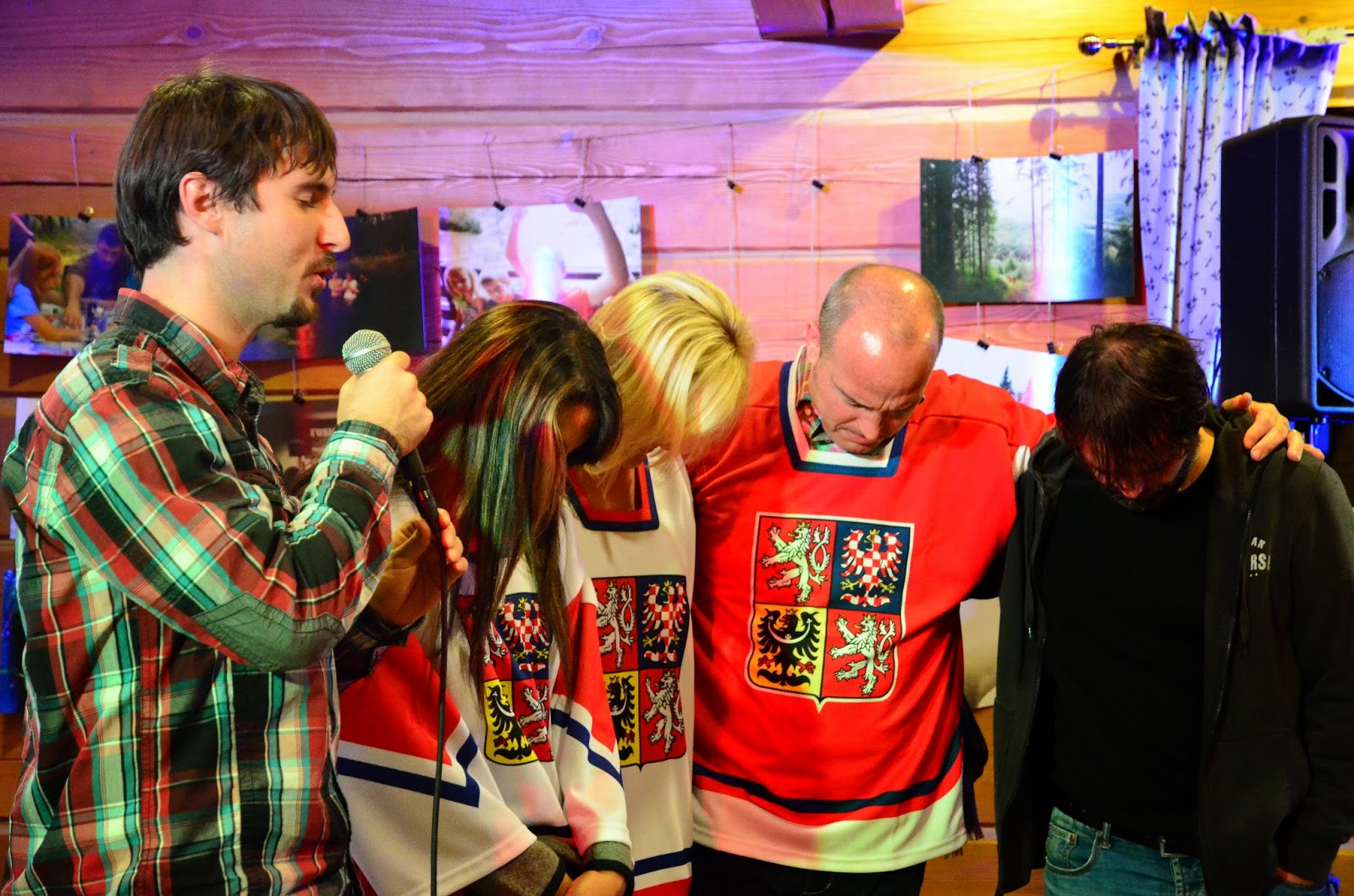 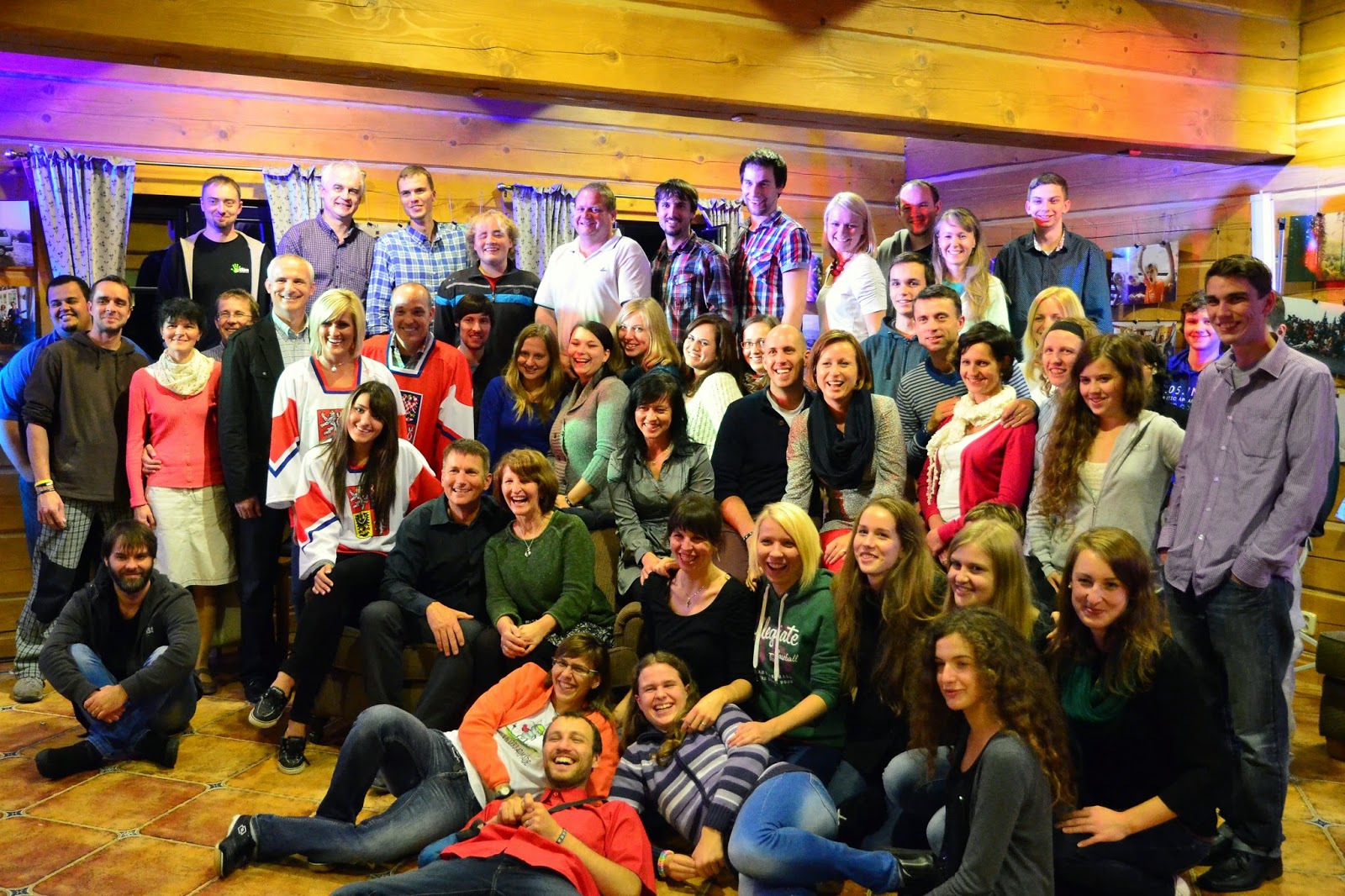 It was a powerful, emotional and wonderful evening of celebrating ALL God has done in the transformation of lives by the power of the Gospel here in this part of the world!
Posted by Unknown at 1:30 PM