After a day out in the boat with our JV friends, we dropped them back off in Hvar Town last night, and then motored down the island and found a little cove to spend the night in, before we take our boat out tomorrow. 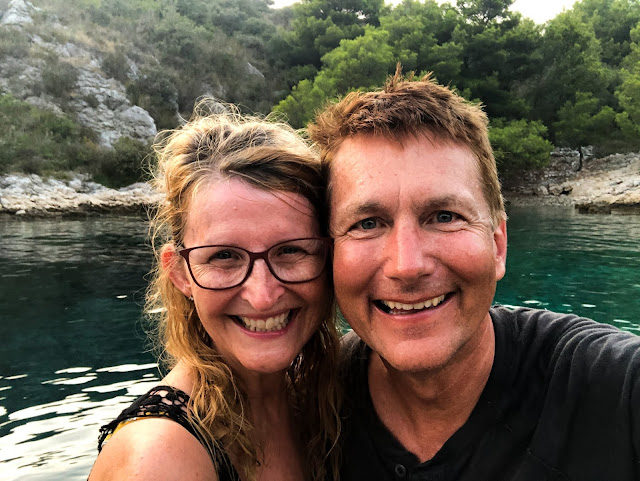 We both feel so rested and energized after our vacation down here!

This morning's view was even prettier with the sun shining into the cove. Oh how those colors, smells and sounds infuse life into us. 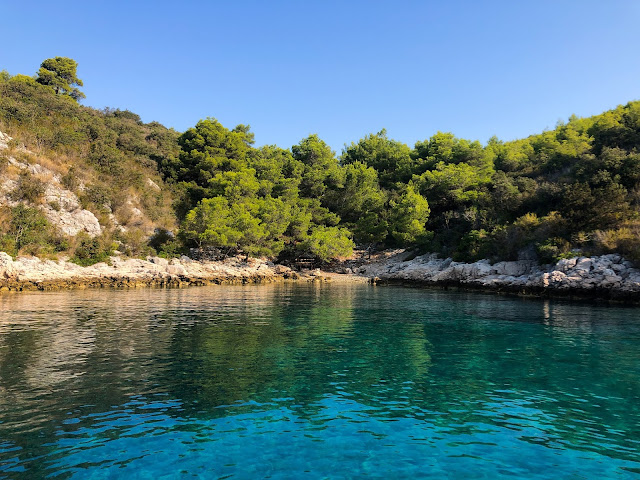 In our minds, we had our day all planned out after we finished our last breakfast on the boat. 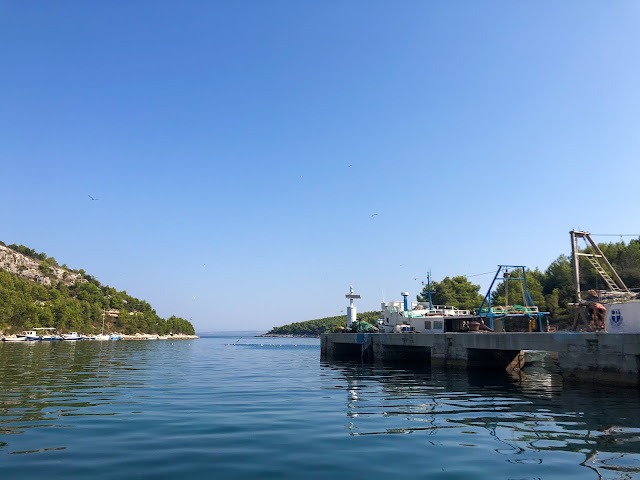 We'd meet up with the crane guys to take our boat out of the water...


...and then go to our house, which has been rented out all summer, and do some yard work for the day. 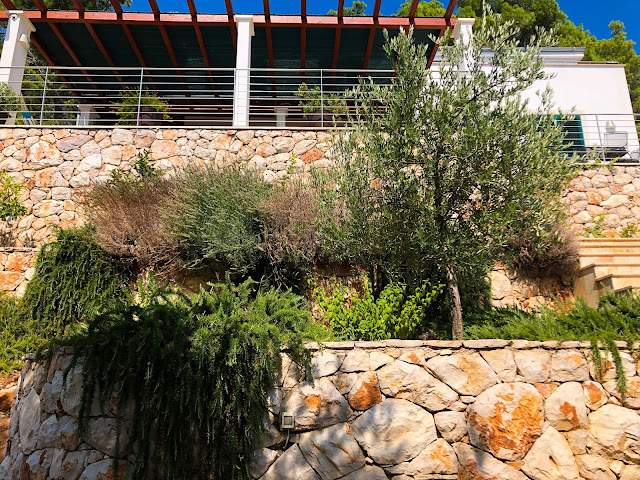 But when we arrived it looked like guests might still be there (you can't see it here but just after I took that picture I started up the stairs and saw towels and swimsuits hanging over the edge!).

After a quick phone call to our house manager, she confirmed that these guests had indeed asked if they could spend an extra day.

So...no yard work today! With that part of our plan changed, we decided to walk down to the marina because it's so nostalgic for us. 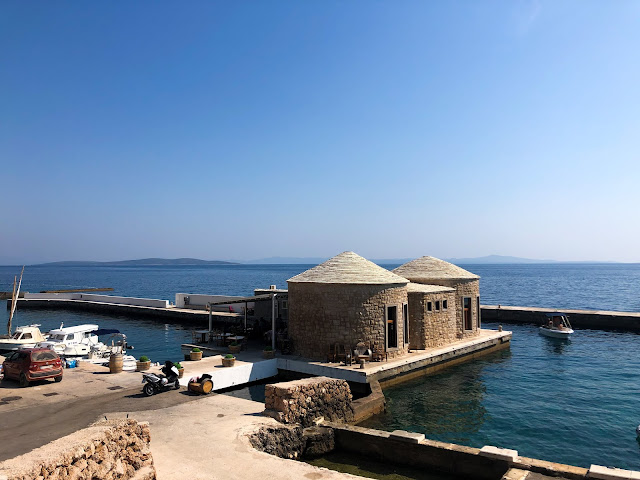 And then we took a walk down to the beach here in Sveta Nedjelja...because it's so beautiful! 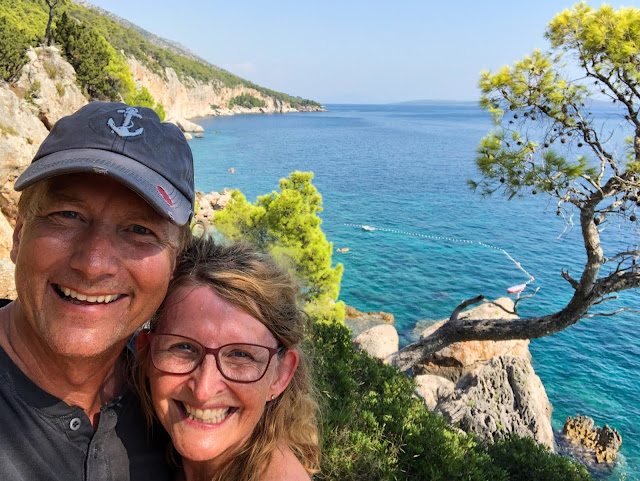 And then we continued on with our plan, which was to get on the Hvar to Split ferry at 5.

Normally at the end of vacation we drive down to the other end of the island and take a different, smaller ferry across and then drive up the coast towards home.

But this year we had car trouble before vacation even started, just as we came into Split. So Dave had made an appointment at the service center to have the car looked at. We didn't want to chance driving it down the island and back up the coast so planned to take the shortest way back from Hvar to Split.

Dave had figured out that it was something to do with the car computer that needed to be reset (it had gone into "safe" mode so the problem was that we couldn't drive very fast.

But as we were leaving Sveta Nedjela, it reset on its own! So then we said to each other, "Let's do our original plan!" So we started out on the drive down the island.

Only to have the car go into safe mode again half way there! Since we were already that far, we decided we'd just go slow and continue on with the original plan. 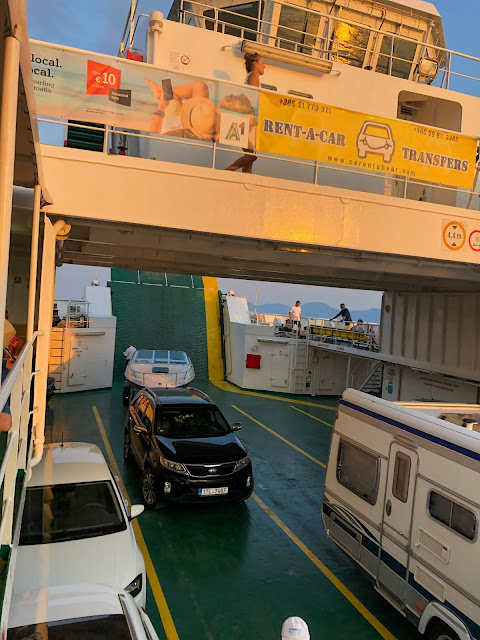 We got there just as the ferry was about to leave, and were the last ones on for the 30 minute ferry ride across to the mainland! 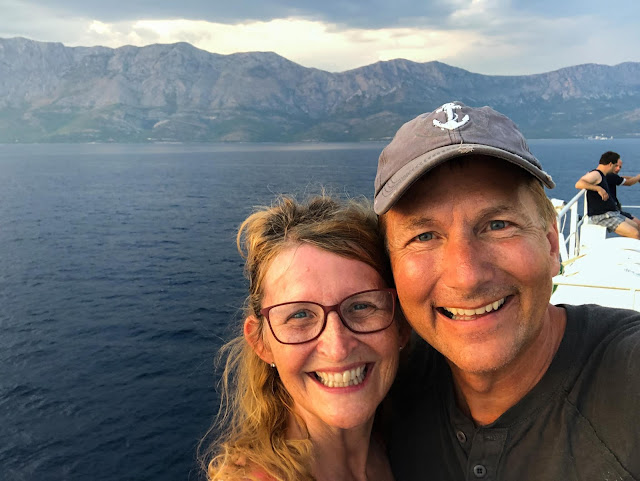 It was a spectacular view of the sunset, leaving Hvar. 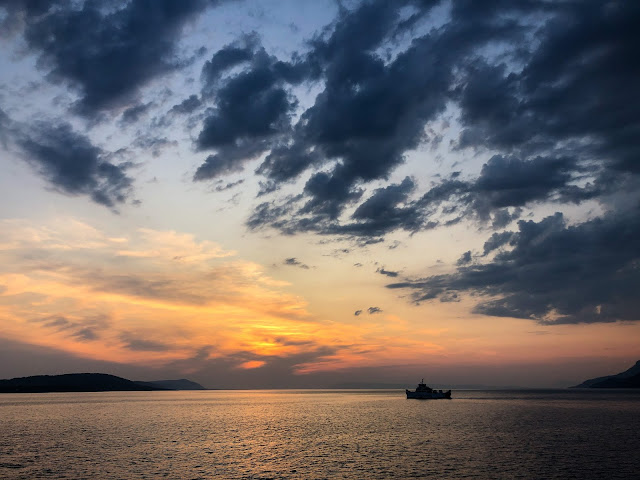 Once on the mainland, we began to slowly make our way up the coast. The car reset again, and then went back to safe mode again. We were doing a lot of praying, that we'd actually make it to Split.

Because it was getting late, and dark, we decided to stop along the way for the night so Dave found what looked like an empty parking lot. 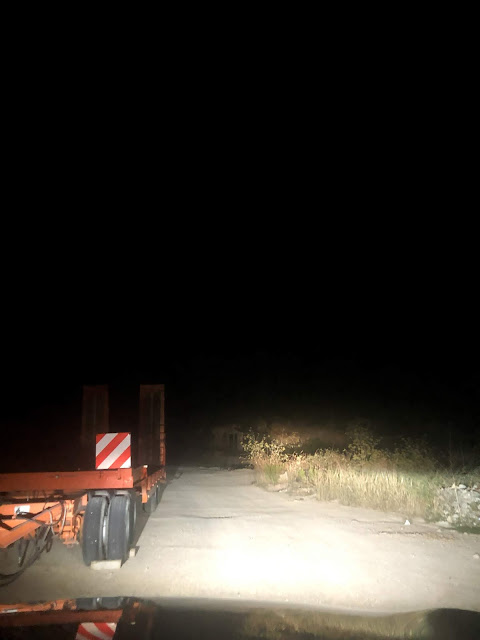 We pulled in and he walked down into it, finding out it was a gravel quarry! But since it was Saturday night, we figured they wouldn't be there on Sunday morning. So we backed in to a spot with the boat and spent the night in it. 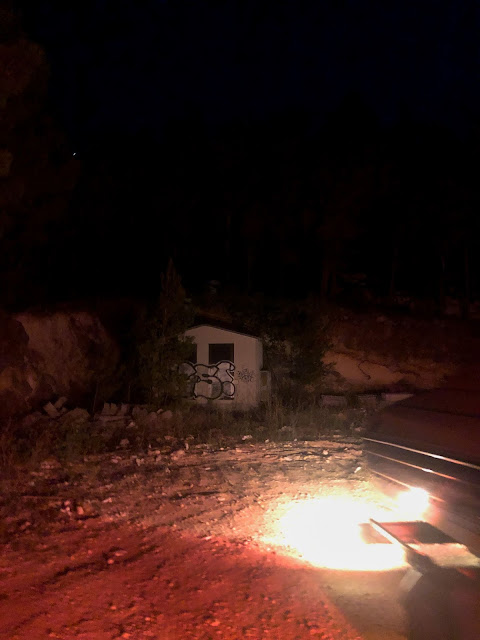 I don't have pictures of what happened later that night. And it WASN'T that anyone came to kick us out.

It was that we were inundated in our little boat cabin by mosquitos!!

At 2 AM we ended up crawling into our car and spending the night curled up in our front seats. It wasn't very comfortable, but it was MUCH better than enduring those screaming mosquitos in our ears and getting more bites!

We had a good laugh about it in the morning, saying to each other, "Well, at least it was free!"
Posted by Living By Lysa at 11:30 PM