My morning started out much earlier than I anticipated. 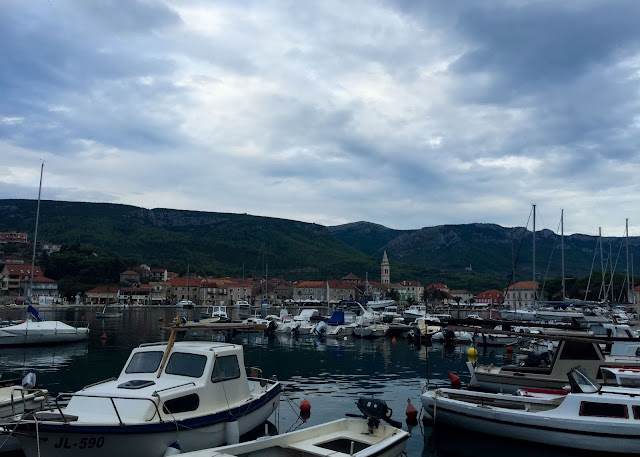 I found out through an email yesterday that my seaplane flight to Split, scheduled for 12:40 PM today, had been rescheduled.

And not only that, it said I wouldn't be landing at the airport, as I'd booked, but rather at their downtown Split location. 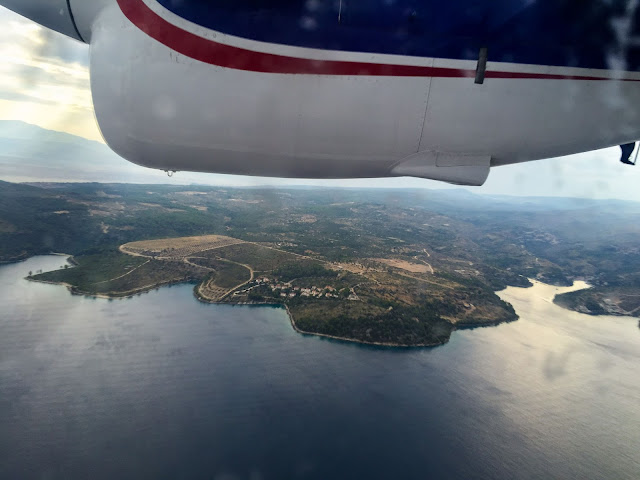 Since you probably already know I try to make the most of situations, I decided to treat myself to breakfast on the riva (waterfront) and just enjoy my day before needing to be at the airport in the afternoon. 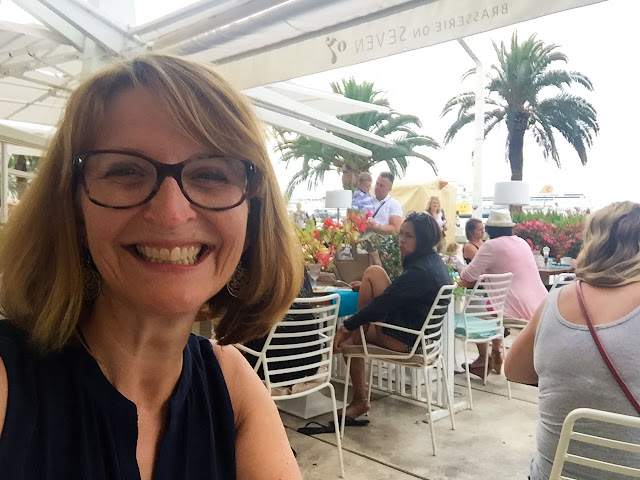 After some good food and a happy texting chat with a friend in the States, I set off through the streets of Split to enjoy some window shopping, looking especially for a little gift to take to the airport. Once I found it, and still had time to kill, I thought I'd jump on the free bus that takes you to the mall.

But when it went in the opposite direction of the mall (since I know where it is), I was confused. Especially when it ended up here. 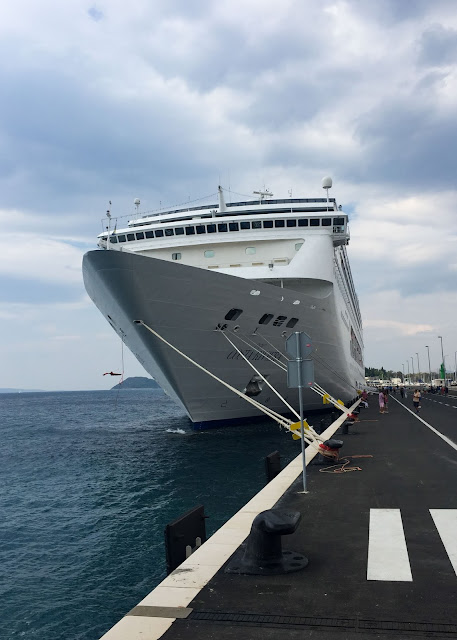 After the other passengers on the bus got off I asked the bus driver if we were now going to the mall, to which he laughed. Not a good sign!

Come to find out, despite the fact that the whole side of the bus advertises it as a free bus to the mall, it actually only goes three times a day. It appears its main job is to deliver passengers to and from the cruise line ships to downtown.

Although the driver didn't speak English, he indicated that he'd take me back downtown to drop me off. So I had a ride all by myself on an open air bus, sitting up high to have a better view of the city as we headed back to the drop off spot! 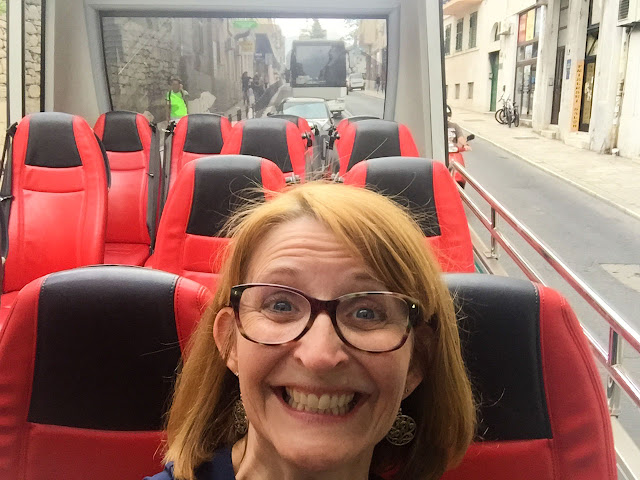 At that point I figured I might as well just get on the bus to the airport, in case something else didn't go quite as expected. 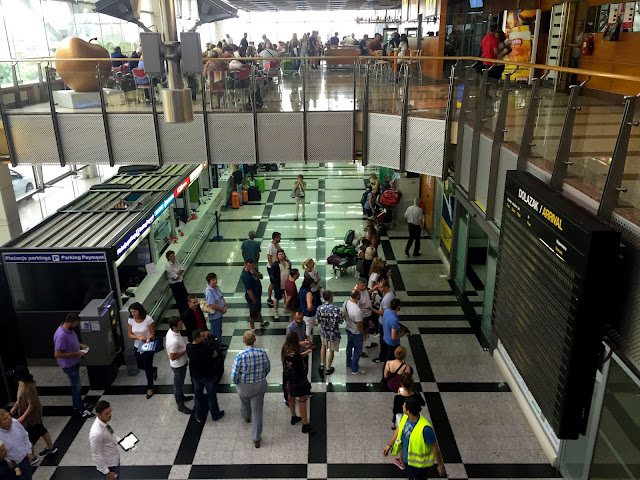 Thankfully I arrived with no trouble and within the hour, I saw these three through the glass as they waited to pick up their luggage!! 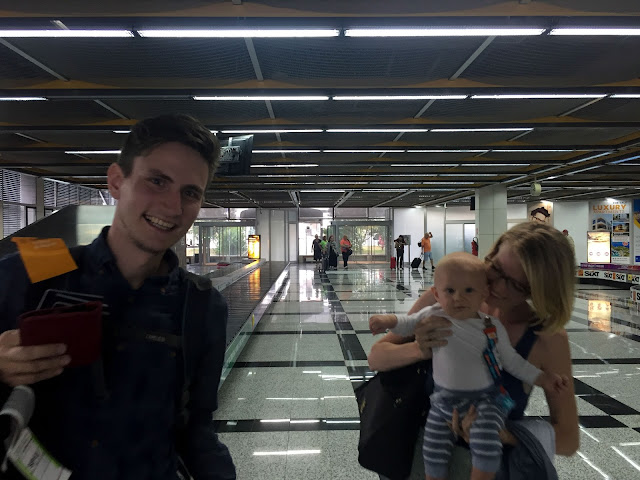 Our son, Tyler, his wife, Lara and son, Judah, safely arrived into Split this afternoon!

They're coming over to Hvar for a few days of vacation with us before we head home to Czech where they'll spend two weeks as they survey where they'll be serving in the Czech Republic with Josiah Venture.  Just this past week they became official missionaries with JV! Whoohoo!!!

The last time Tyler and Lara were here at this airport, three years ago, they had just finished their summer internship with JV.

Now they're here with their son!


Oh how much fun it was to see Judah on this side of the ocean, and get to have him on my lap as we traveled back to the seaplane for our flight across to Hvar. 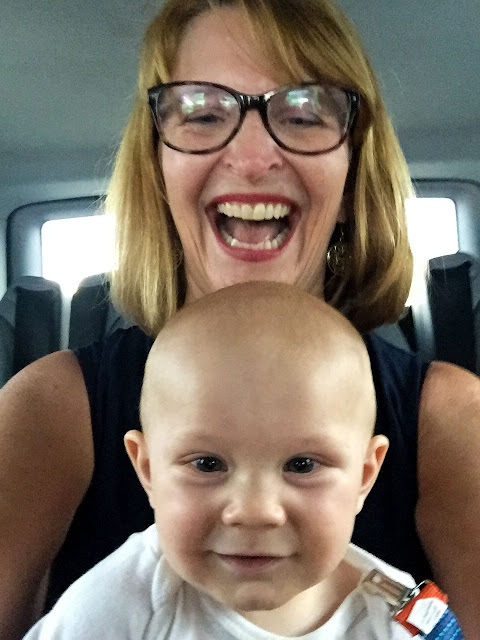 The plane wasn't there when we arrived. When it did land, and passengers disembarked, it didn't look like your average group of vacationers heading home. 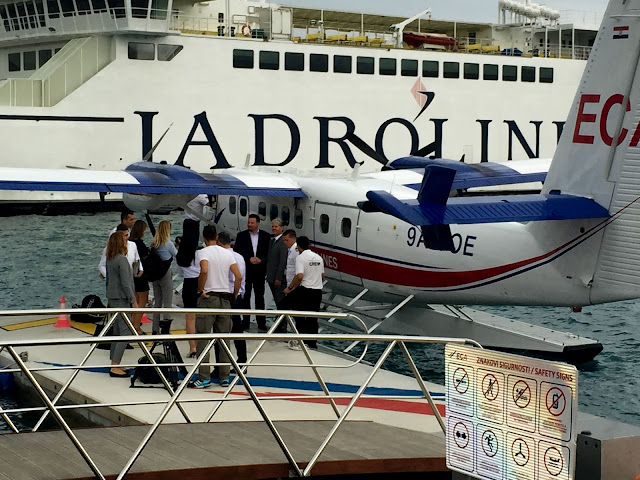 Personally I think I had the more important dignitaries with me! 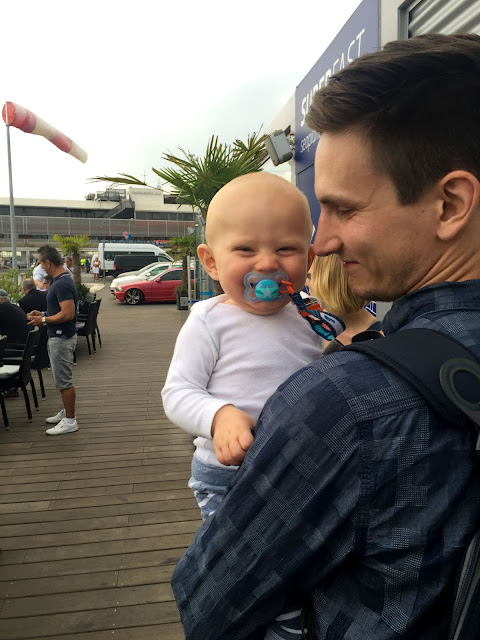 But as we watched news people and photographers continually surrounding the group, curiosity got the better of me and I asked who had come in on the plane. 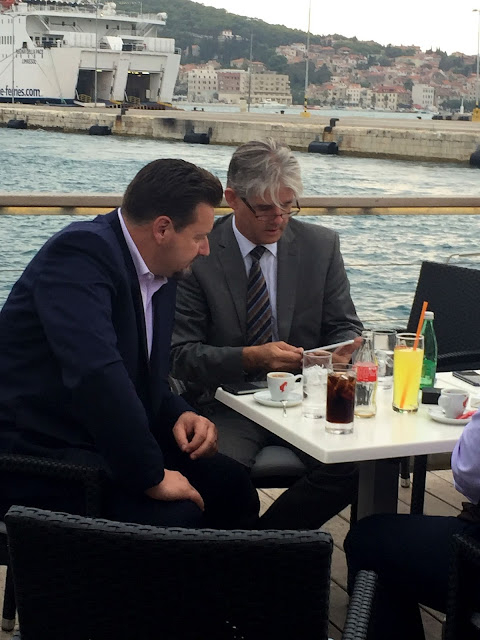 Oh you know, it was just the owner of European Coastal Airways (from Germany) and an official in the Croatian government. Kinda cool!

Soon it was our turn to get on board, despite the wind and sprinkles of rain that were beginning. 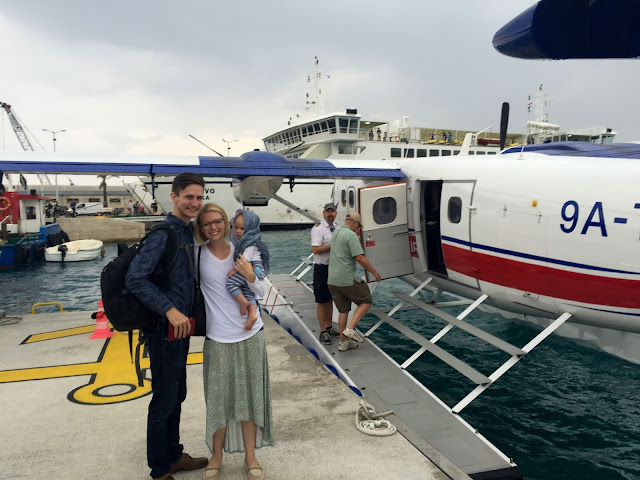 When you're on a rocking dock AND getting onto a rocking plane, you need a little help! 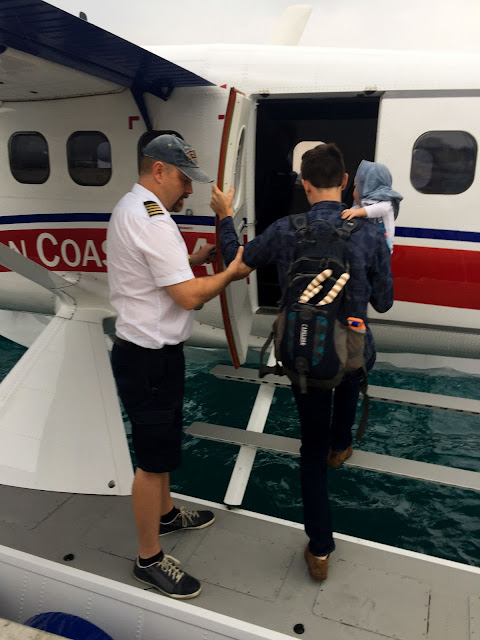 Thankfully we all got settled quickly, and Judah sure seemed to be taking it all in stride. This is after nearly 24 hours of travel for these three! 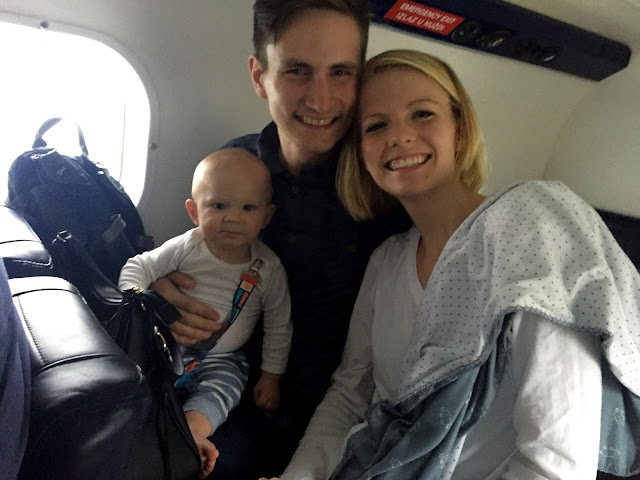 We then happily said goodbye to clouds and rain in Split, 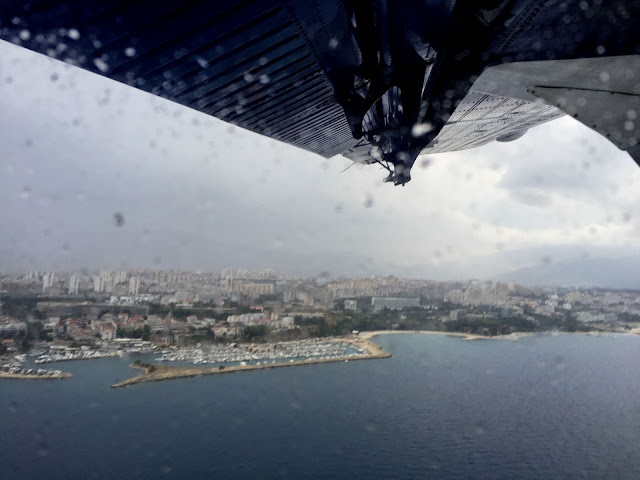 And hello to sunshine and warmth on Hvar, after just a twelve minute flight! 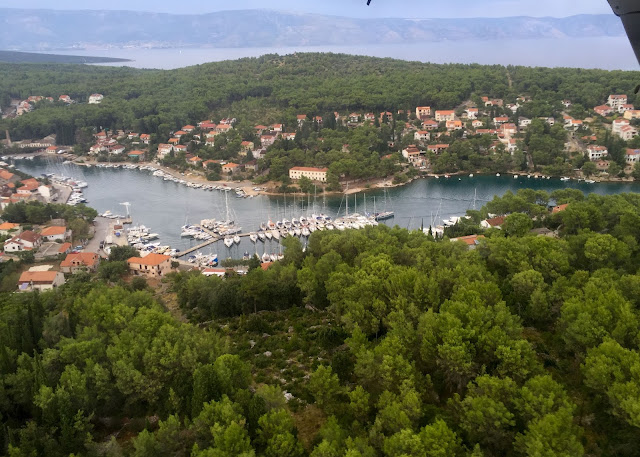 Since they were all hungry, we headed to a restaurant to get them fed before going to our house. I couldn't believe this guy was still happy and hanging on after all he'd been through! 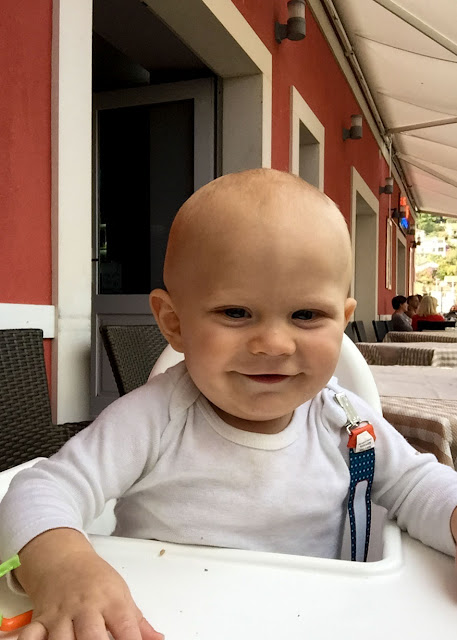 I finished my meal quickly so that Judah and I could let his mommy and daddy eat without interruption, since by this time he was saying, "Okay people! I've had a enough - let's get going!" 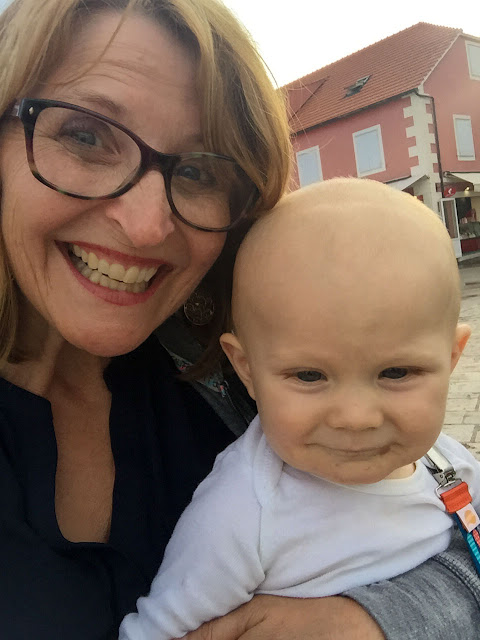 Twenty five minutes later, we made it to the house and these three were reunited with Dad/Papa! 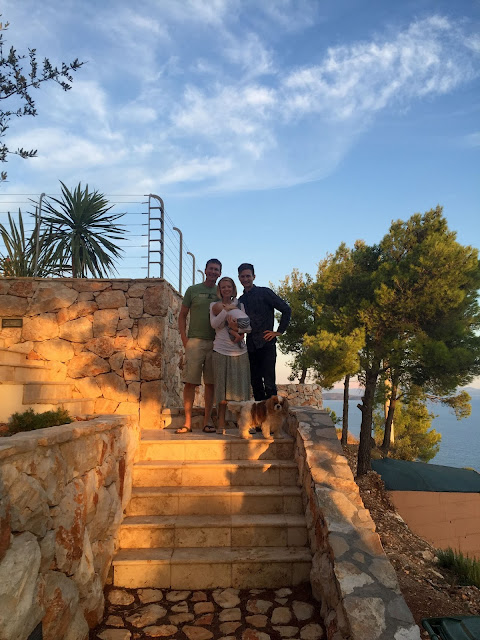 Oh, and Judah got to meet Kaylee. He's quite enchanted with her! And she is quite patient with him. :) 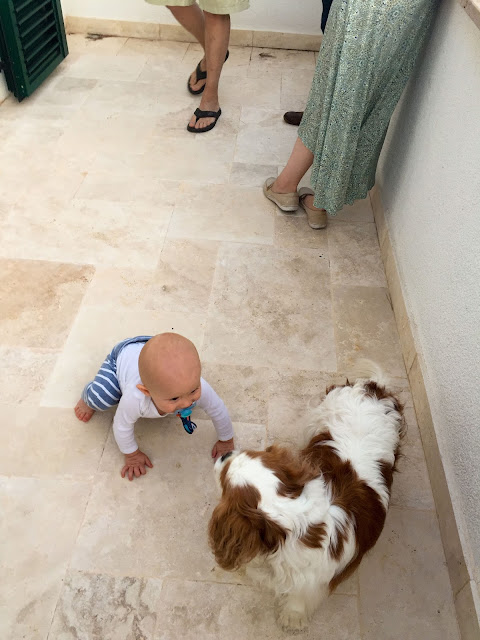 It is ever so delightful to have them here with us now. Tyler and Lara had never seen the house, in any stage of its three year development, so it's really special to share it with them for the next few days. 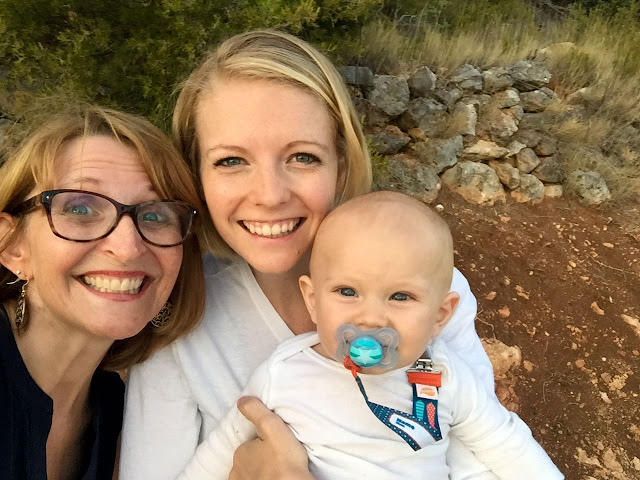 They're all in bed now and I am praying that they sleep tonight and make the adjustment to European time quickly so we can fully enjoy these days the Lord has given us to be together. 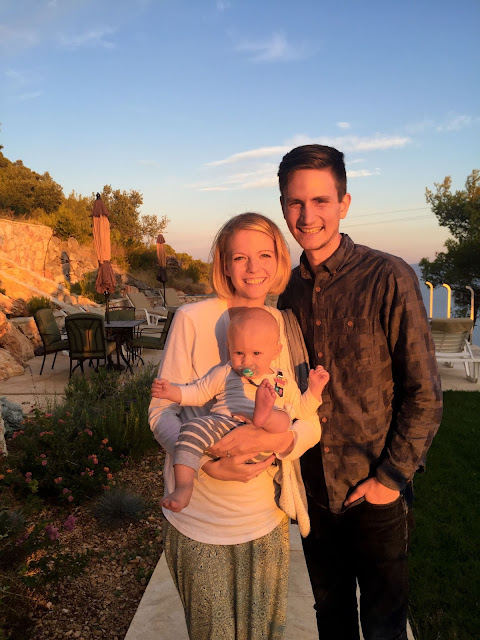 My heart is happy, full of joy and oh so content. What a good gift to get to have these precious ones here with us!
Posted by Unknown at 11:27 PM