Yesterday morning I woke up at 4:15 to see Caleb off to Krakow where he was planning to take another round of SAT's.

I climbed back into my warm bed, snuggling down for some more hours of sleep while I drifted off praying for a safe trip and good tests for him.

Half an hour later, the phone beside my bed rang.

"Mom, I just filled up dad's car outside of Frydek and now it won't start - it's making weird noises."

Handing over the phone to Dave, I listened in as they talked through what the options were. Not many.

Within moments, Dave and I were up and out the door, headed to the gas station where he was stranded, the clock ticking towards the time he needed to be there.

In the end, we decided wisdom was for me to drive Caleb to Krakow in my car. Since we didn't know what was wrong with his car (though it started with a push), he was now in danger of not making it there in time, and I knew the way (he'd been there, but never driven it himself). So he and I pulled out of the gas station and hurried on our way.

We arrived at 7:45, just in time! I dropped him off and drove away with a prayer that in spite of the stress of the morning, he'd do well.

As I left from the remote location of the school that hosts the test (see here for what happened last time we were there!), I was also praying for anyone who was lost and needed help getting there like last time, that I'd see them and be able to help.

Sure enough! About five minutes later, a taxi was stopped in the middle of the road, apparently asking a man on the side for directions. I just knew it was a student bound for the SAT's!

I pulled into the oncoming lane, beside the taxi, rolled down my window and asked, "Are you looking for the SAT's?" The girl and her mom in the backseat both cried out simultaneously, "YES!!" I answered, "Follow me".

So once again, I got someone to the SAT just in the nick of time!

I had to laugh to myself as I drove off, imagining the conversation in the taxi as they followed me: "Who do you think that is? An American lady, driving a Czech plated car, in the middle of nowhere in Poland, pulling up beside and asking if we were looking for the SAT's?? She must be an angel!"

HA HA! Nope...just a mom in the right place at the right time.


Caleb said afterward that he felt good about the tests - didn't even feel tired because he'd been able to sleep the whole way there while I drove! 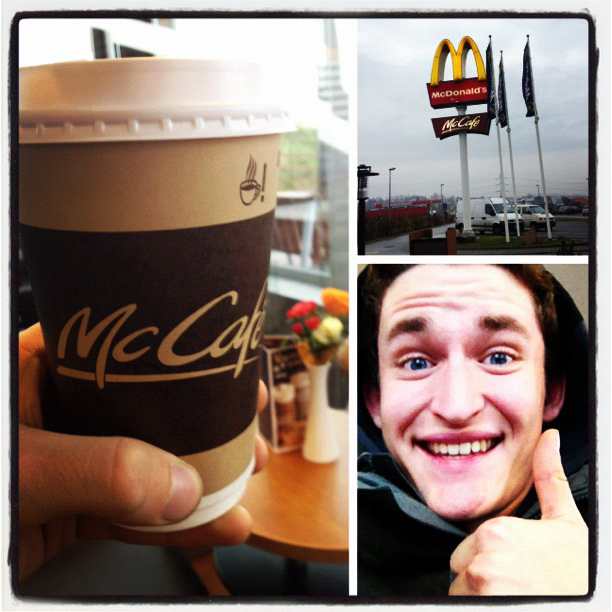 We relaxed with yummy holiday lattes at a McCafe before making the two and half hour drive back home.
Posted by Unknown at 1:58 PM