Inside this church in Ostrava last night, something magical was about to happen! 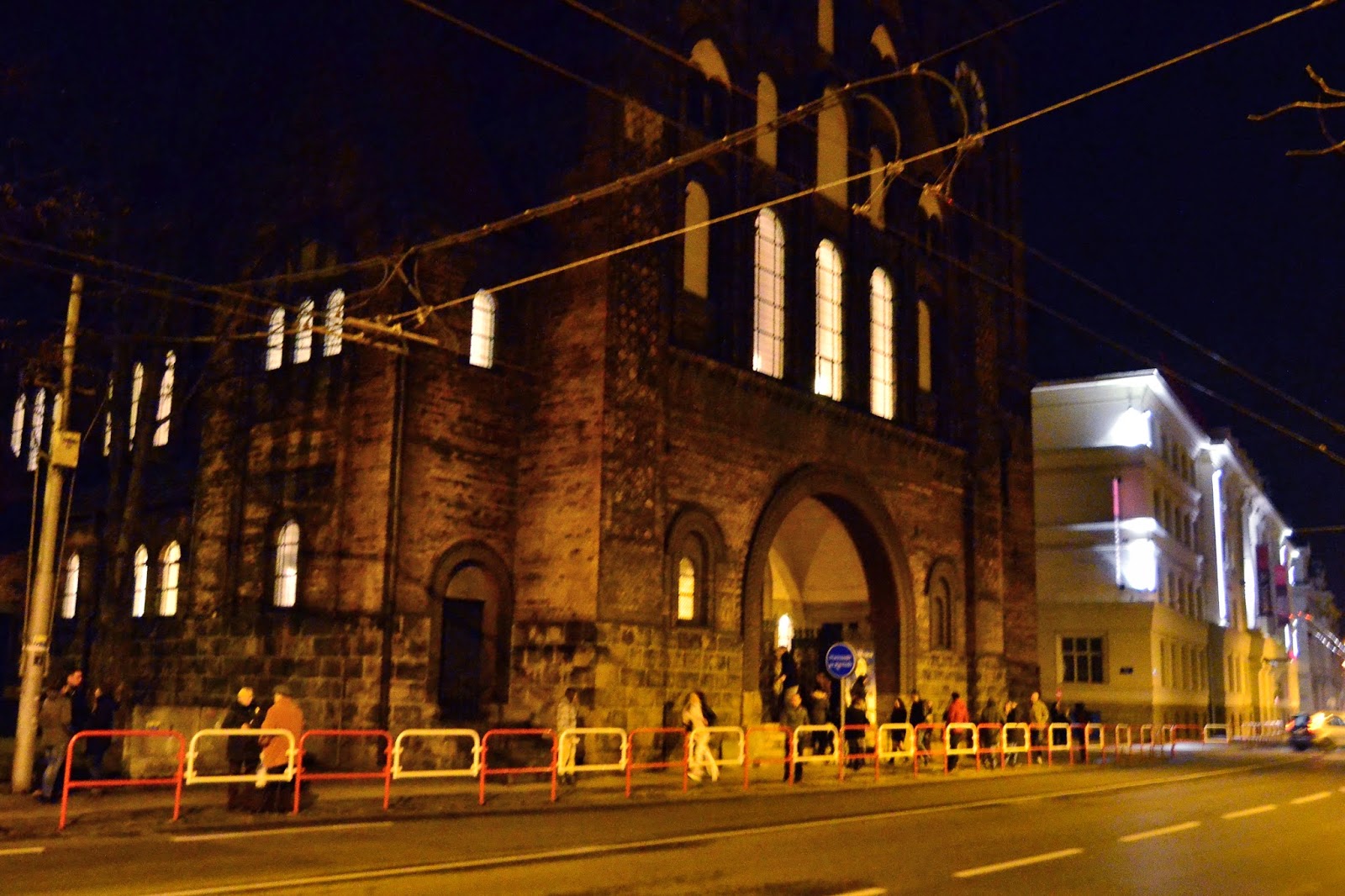 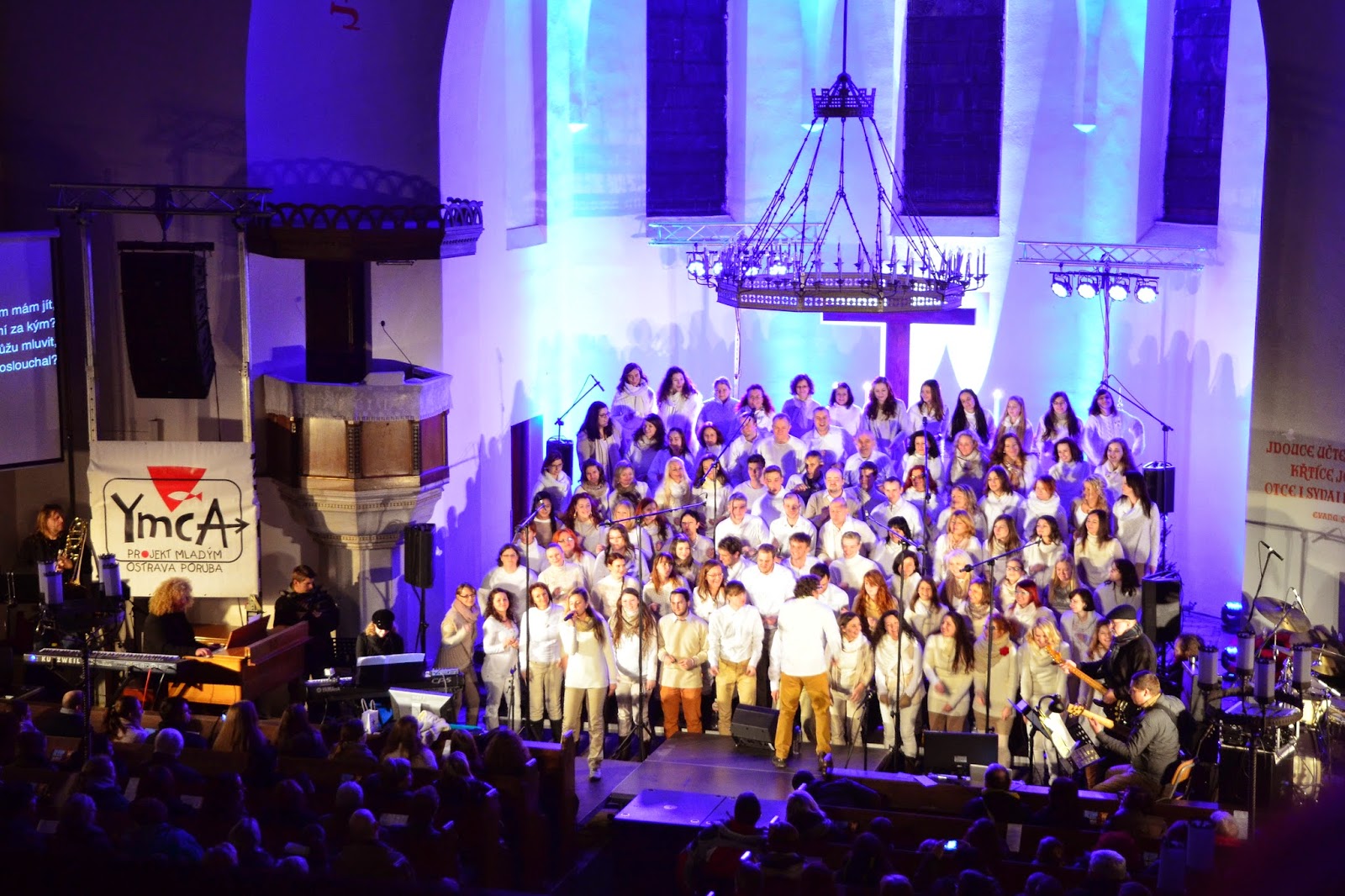 Last year Terry began this Christmas Gospel choir for adults with 70 members, and this year had to cut off sign-ups at 100 as so many were interested in being part of it. The choir came together for only four or five practices and somehow managed to pull off one of the most vibrant, professional, well done and enjoyable concerts I've ever been to!

Several of our JV family participated as well.  Shelby Flowers was on keyboard and did music arrangements. Christy Owens (singing an amazing solo in the photo below!), who leads the Fusion ministry in Ukraine, came to be a part of it. And Zuzi Vyvialova who serves on our international Fusion team sang in the choir. So fun to see all of them giving of their gifts and talents so whole-heartedly! 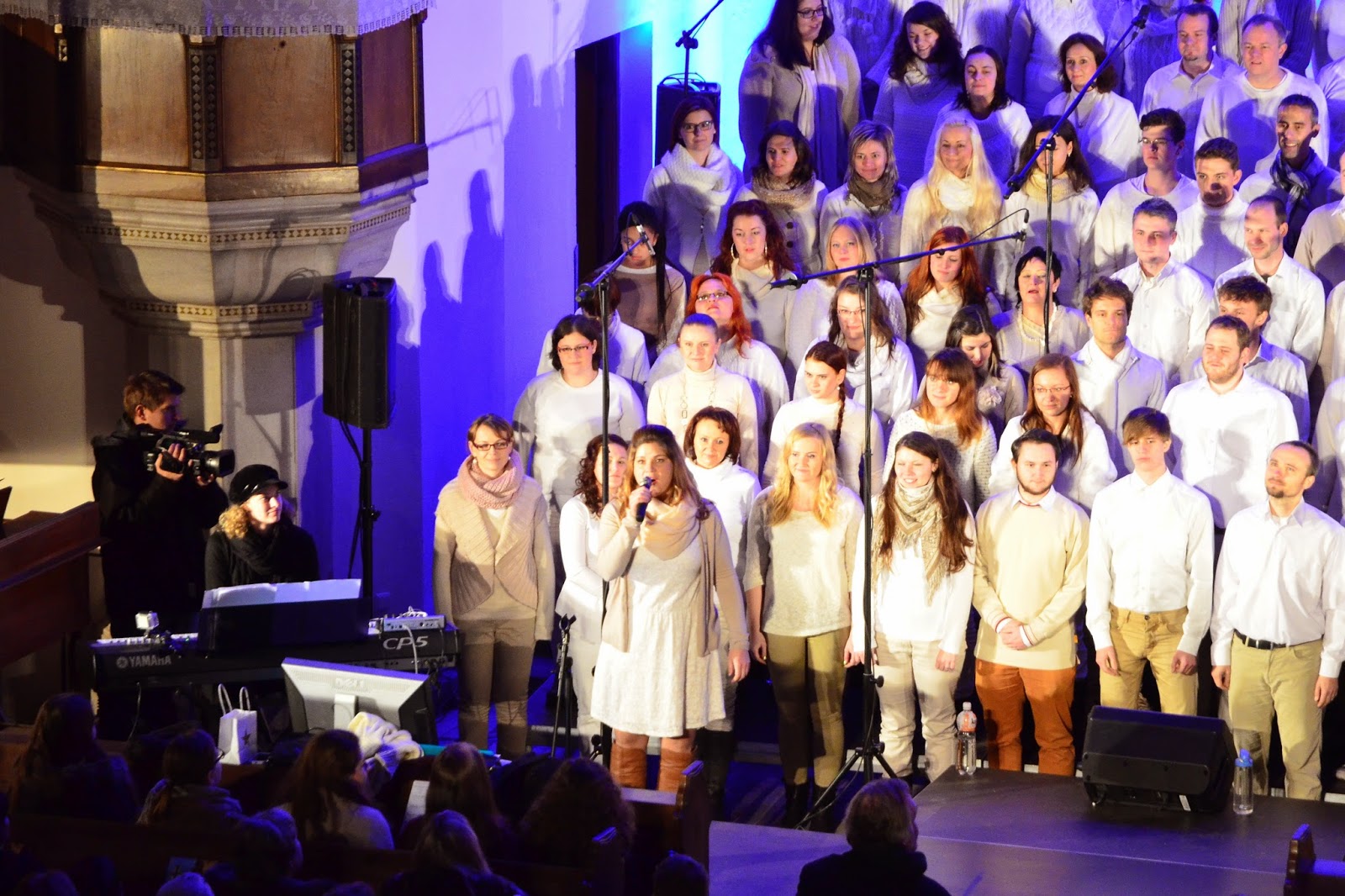 This was definitely not a boring concert. I'm not sure who had more fun: the audience, the choir members or Terry! 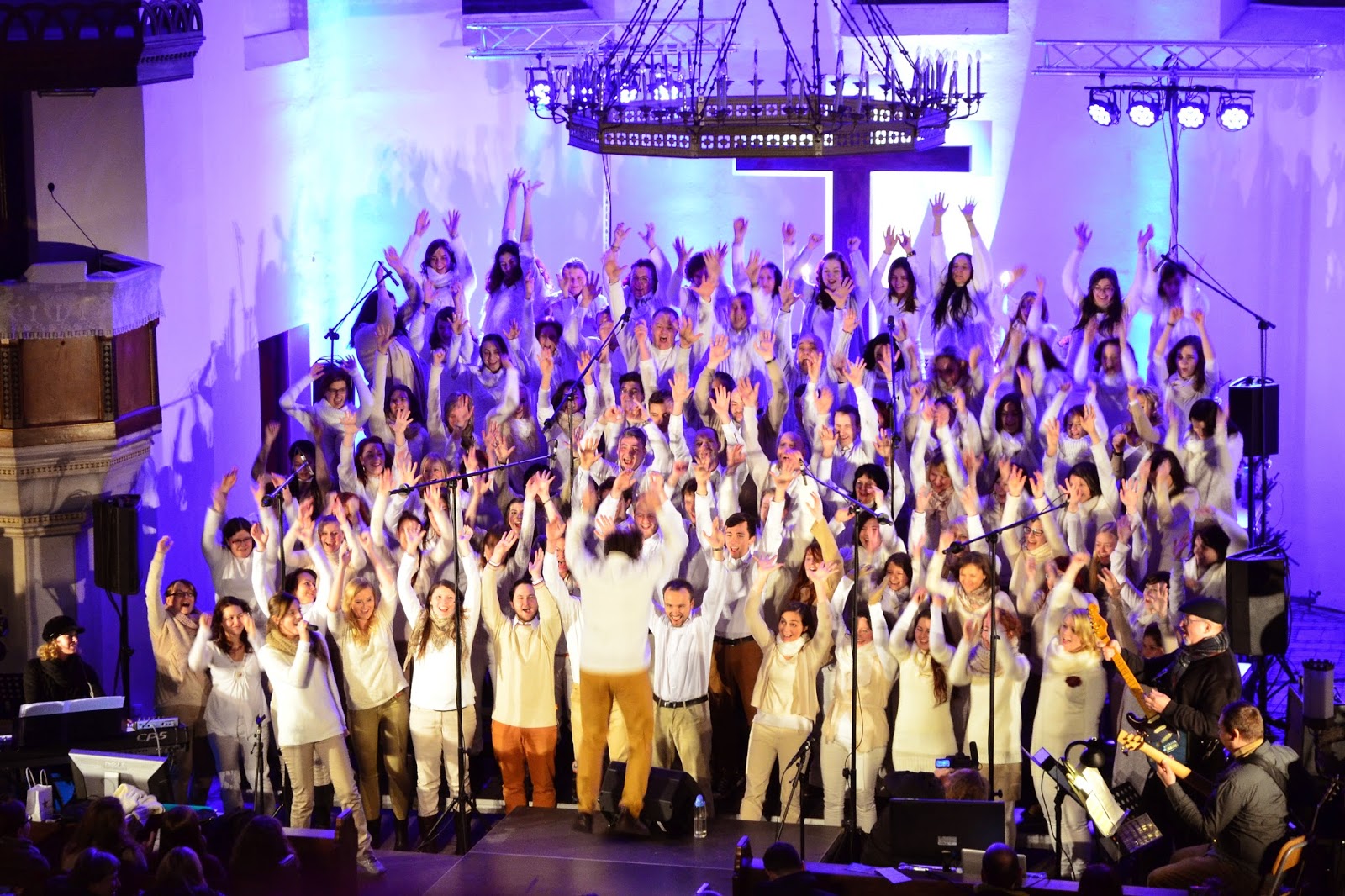 The church was absolutely packed with around 700 people, with tickets having been sold out. Because of such a positive response last year, they added a second concert this year (which was on Saturday) and I believe I heard both were sold out!

What will they do next year?! 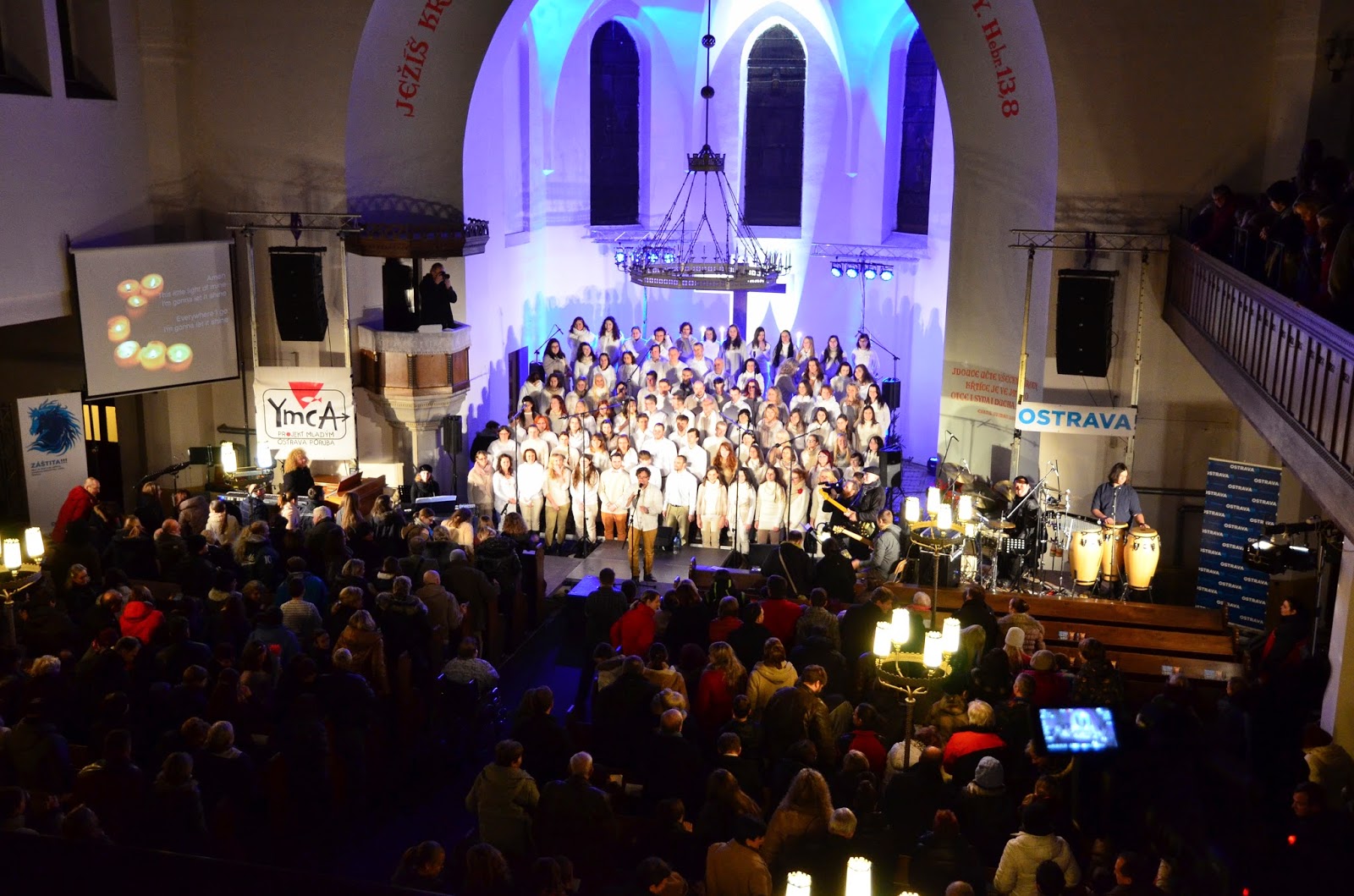 Terry clearly shared the Gospel in a most winsome and endearing way. I sat in the balcony with Dave and Claire, praying that people's ears were open to hear the message of Jesus.

When "Oh Happy Day" began, people in the audience were singing, clapping and swaying to the joyful music, hopefully taking in the words: "Oh happy day...when Jesus washed...He washed my sins away"! 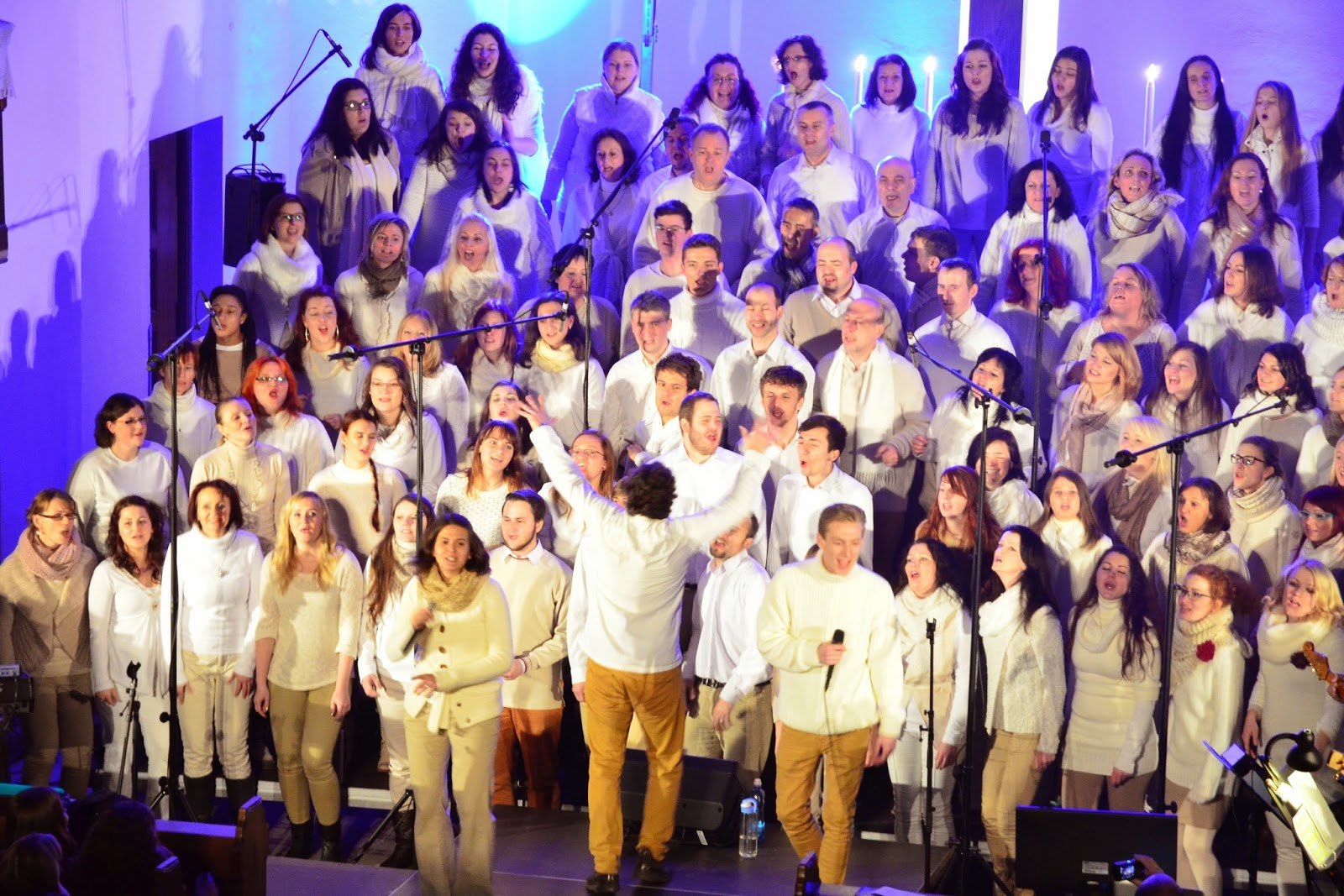 It was clear the choir appreciated Terry's selfless work in putting together something so meaningful. I loved that they thanked him publicly with a cake! 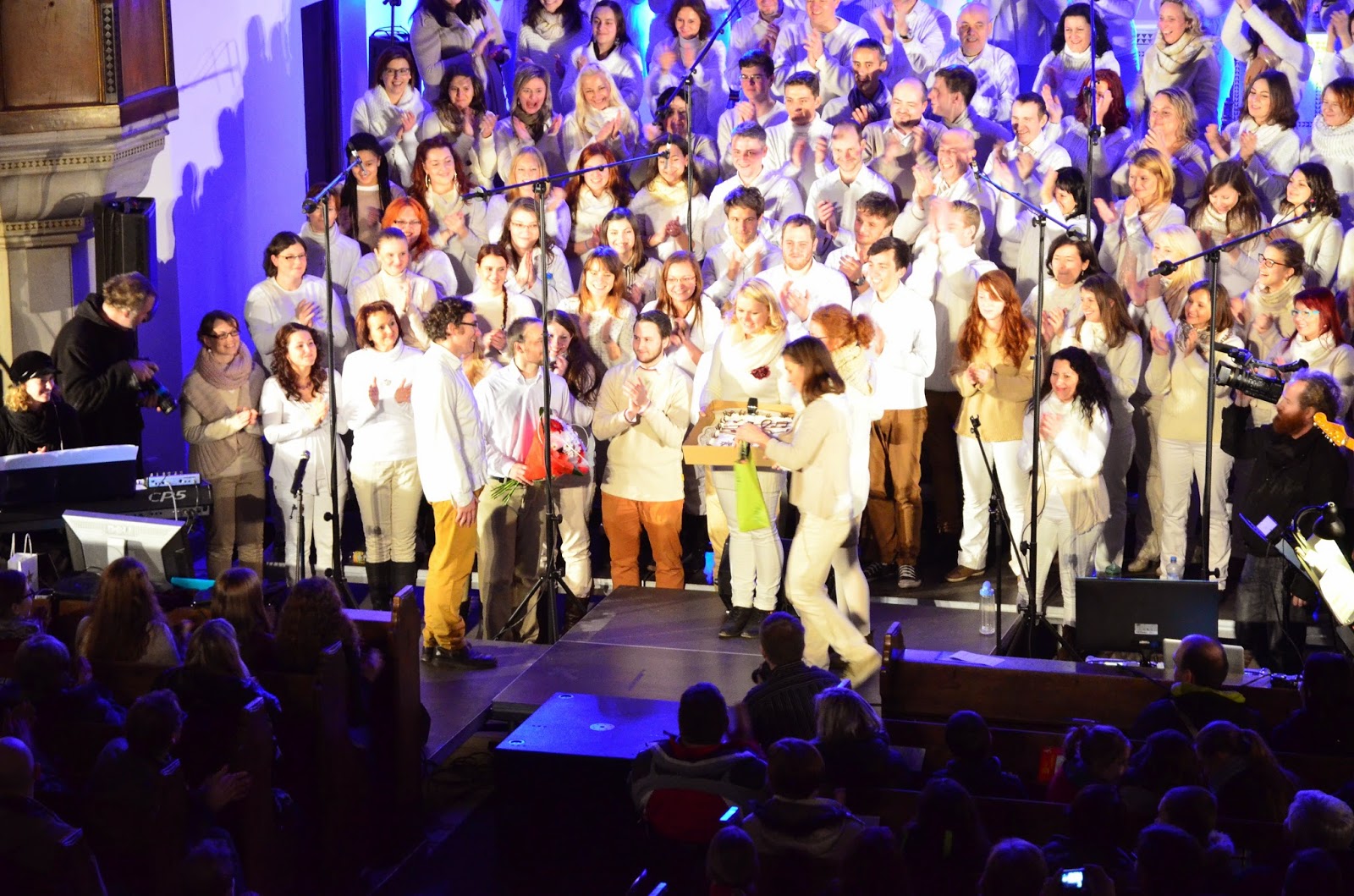 And flowers for his wife, Hanka, who they brought up on stage to honor for letting him spend a lot of time working on it! 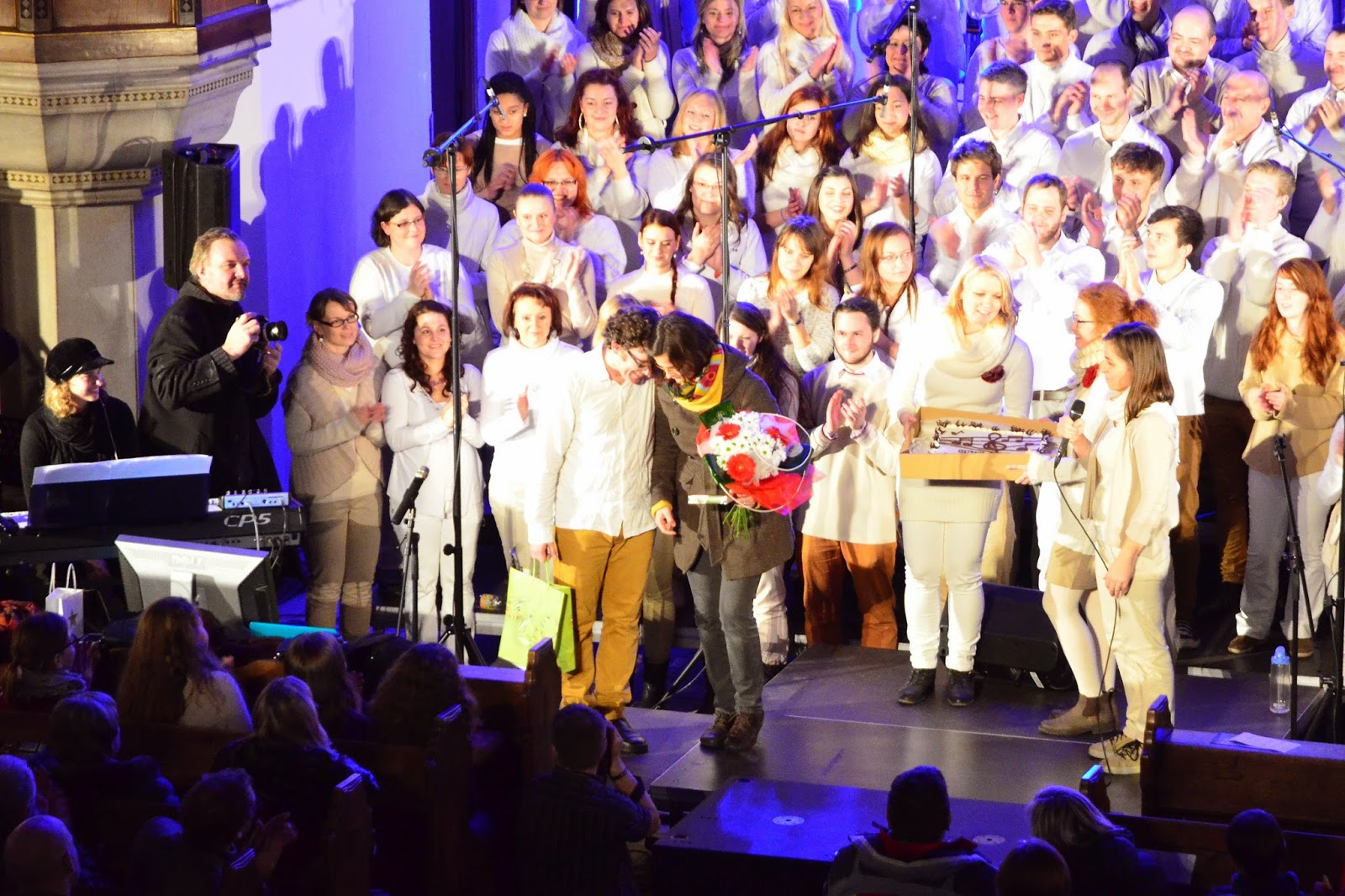 I seriously had tears in my eyes at the end of the concert. What an amazing testimony it was of the Lord in that place, what a beautiful witness of Him to members in the choir, as well as to all who were in the audience. 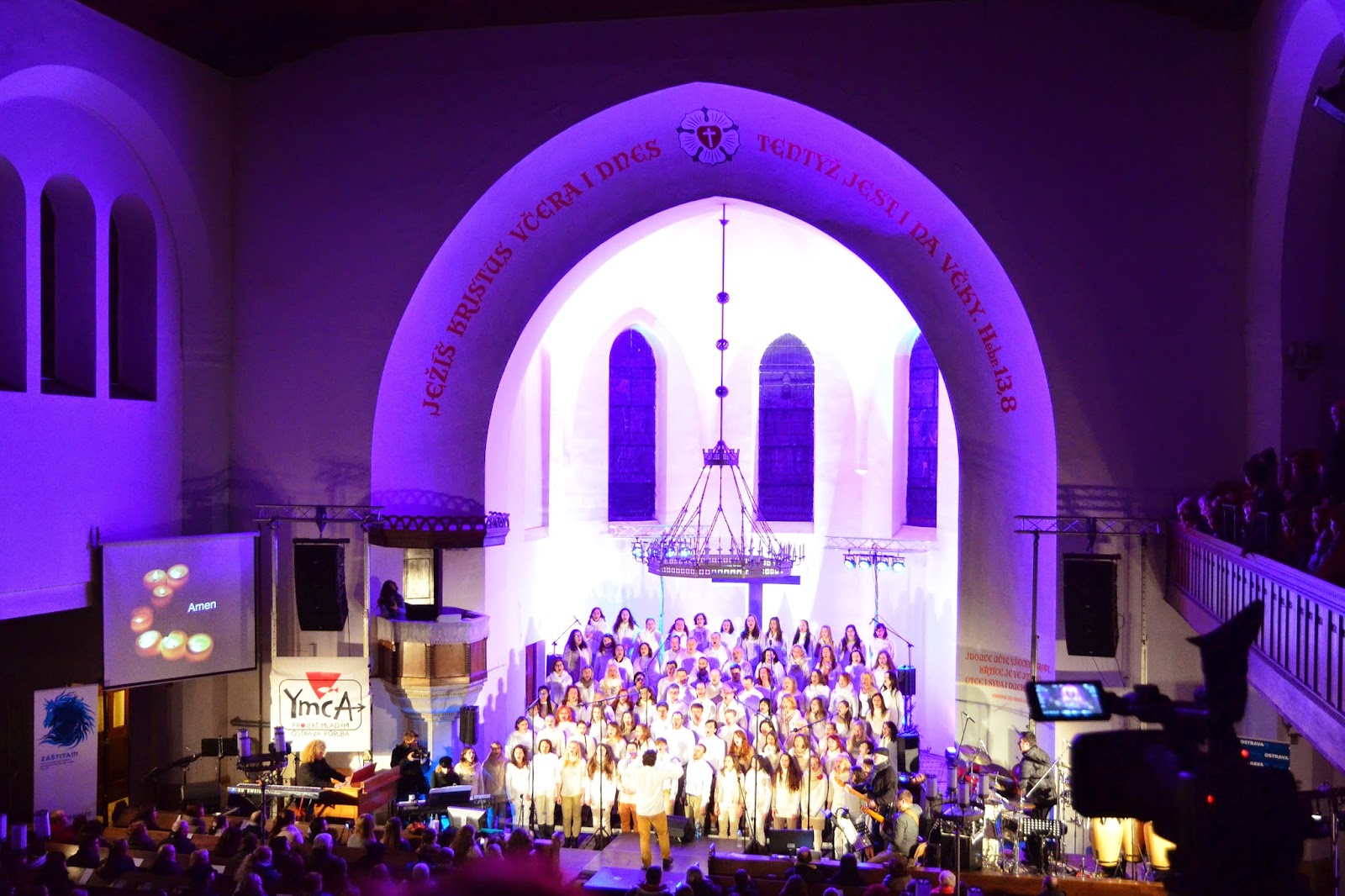 Dave and I felt like proud parents afterward as we went to those in our JV family who had participated. As parents do, we told them all how wonderful the concert was, and how proud of them we are for being lights in this city, bringing the love of Christ to many. 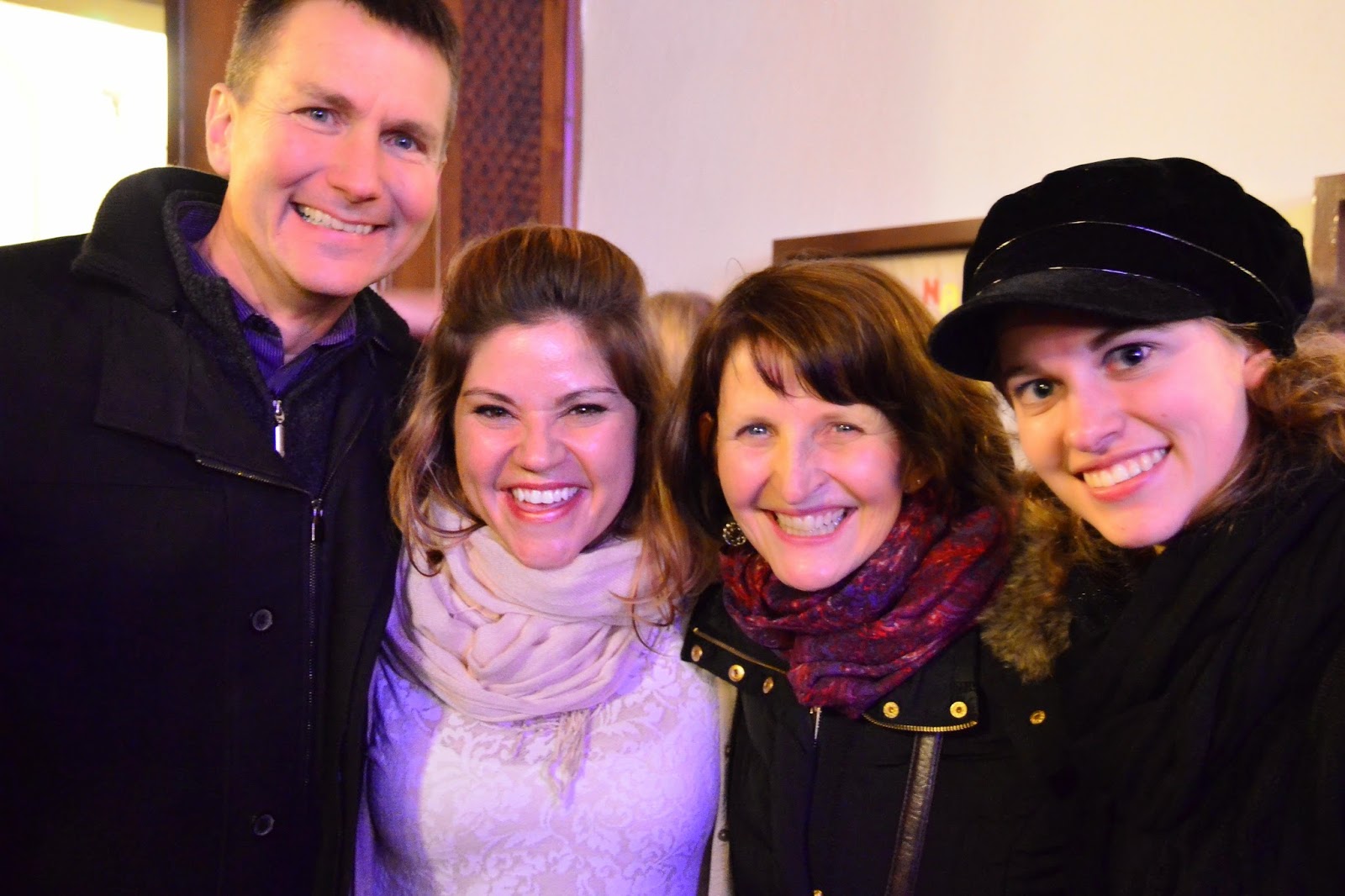 It was a memorable evening for sure, and I honestly can't wait for next year's concert!
Posted by Unknown at 11:27 AM