Christmas Eve Gifts for our Neighbors

Over the years I've written many times about our dear neighbors, the ones who live closest to us.

A brother and sister now in their 60's, they are sweet, simple people who don't have much except for a lot of love in their hearts which they kindly pour out on us year after year.

Today, on Christmas Eve, it was our joy to celebrate and repay their kindness with a very special gift for them. 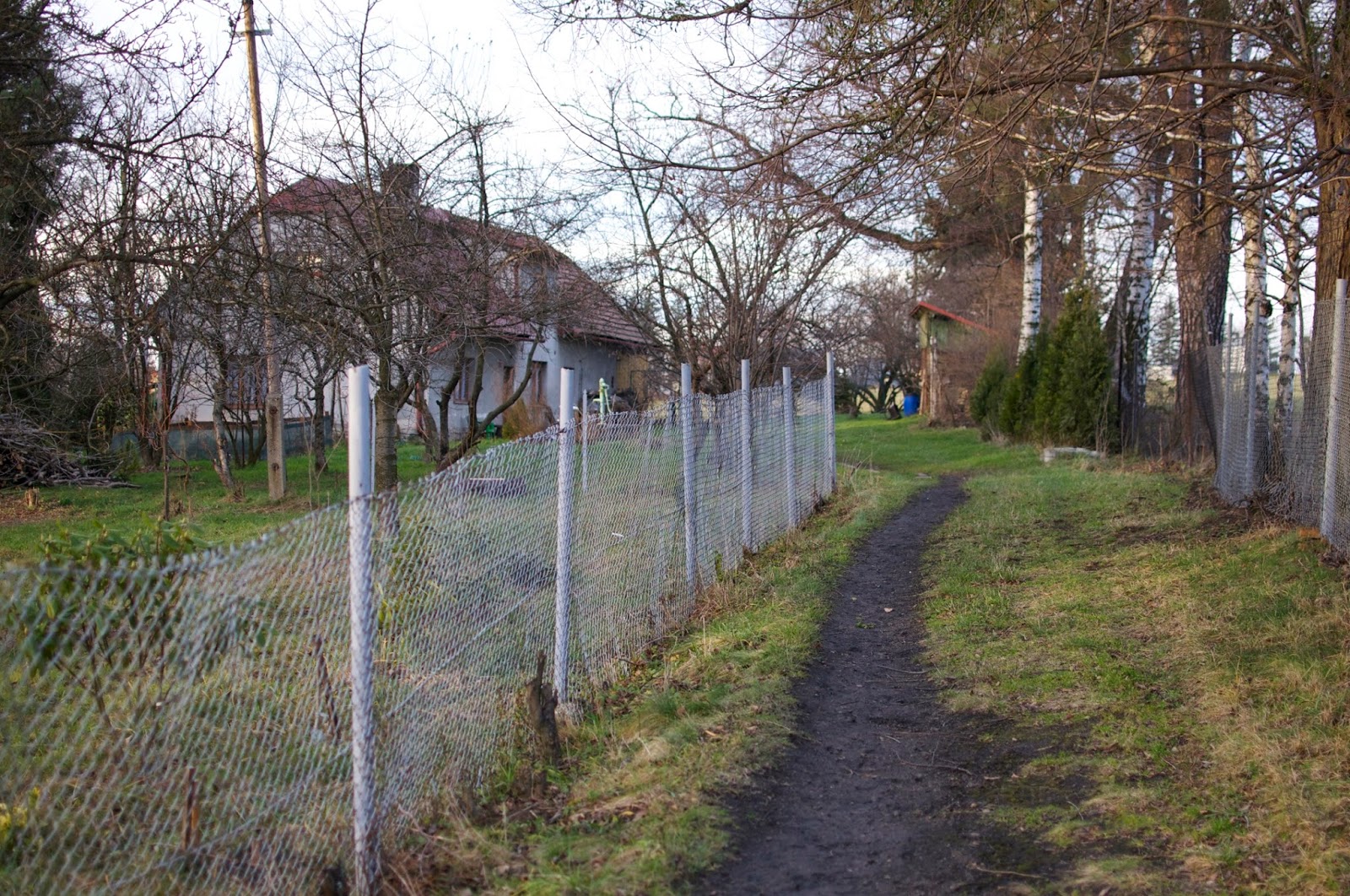 We've been holding this gift for them since February, after we visited some friends in California. I was so excited that today we could finally give it to them.


Years ago, perhaps seven or eight (I can never remember how long exactly), some dear friends came from the States to visit us.

For some reason, we took them over to visit our neighbors, something we've only done one other time in the ten years we've lived by them, due to their living conditions. If you go inside for long, you come out smelling like the chickens, and other animals, who live inside with them. They're dear, but life is just different for them than anyone else I know.

But we took Jerry and Elene over to visit them. And an hour after returning home from that visit, the brother and sister showed up at our door with a gift for them: a gift they'd literally taken off their wall. It had been a birthday gift the sister had given the brother some years ago - a beautiful needlepoint of Jesus that she'd made for him.

She scratched out his name on the back and brought it over to give to Jerry and Elene as a gift to remember them, the brother and sister.

Jerry and Elene took it home to California and told us it was one of their treasures from that trip.


Fast forward to February 2014 when we went to visit Jerry and Elene. After showing us the picture hanging in their house, they told us they had gifts for the brother and sister that they wondered if we could take back to them.

Jerry, a woodworker, had hand-carved a really cool little man for the brother, and Elene had a beautiful cross necklace for the sister. It was one of the sweetest and kindest things to know they remembered the brother and sister!

So finally today we got to tell the brother and sister how much their gift meant to Jerry and Elene all those years ago, and bring them gifts in return. 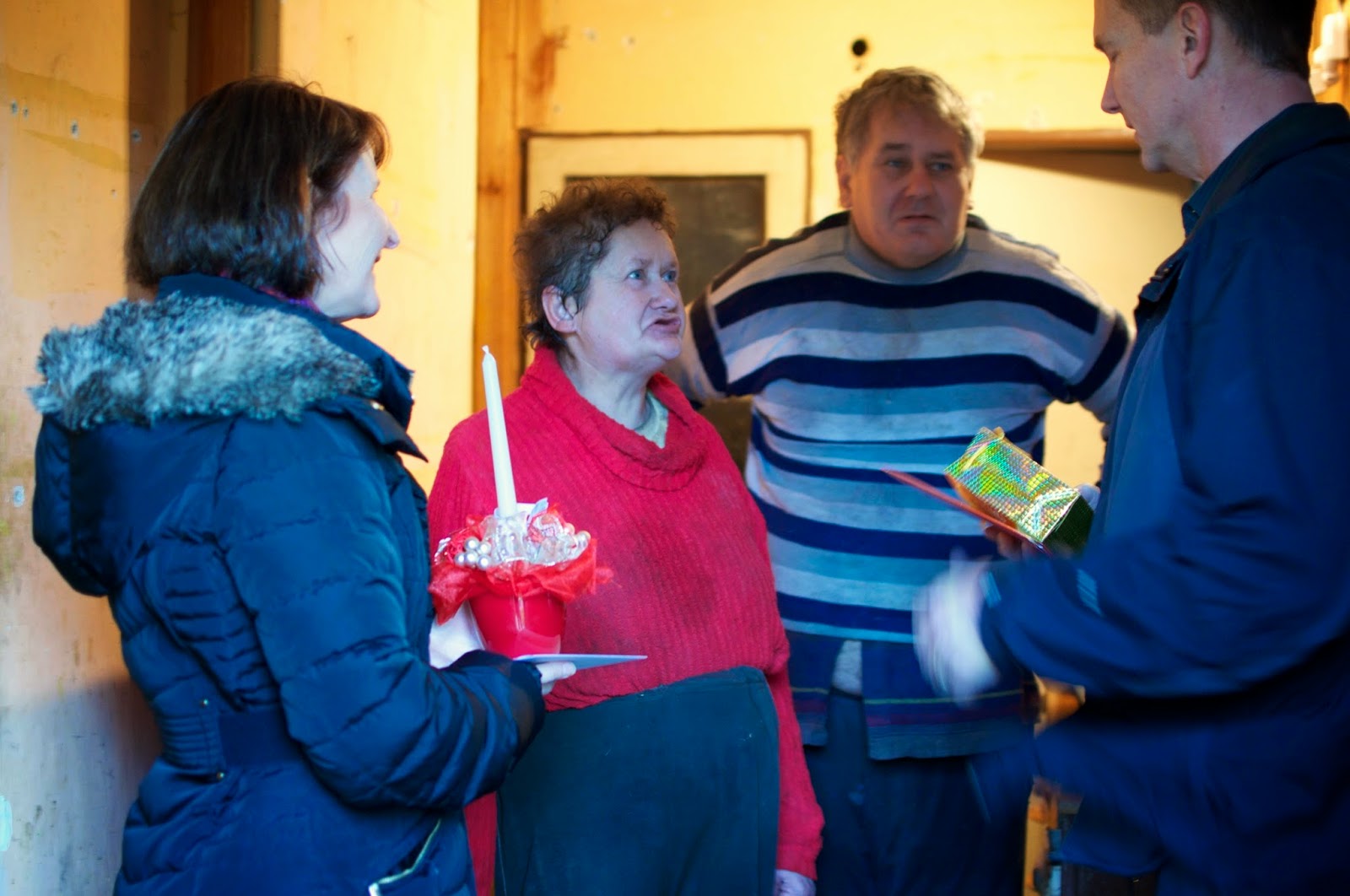 I had pictures printed out to give them of Jerry and Elene, and of the Jesus picture hanging on the wall in their home. 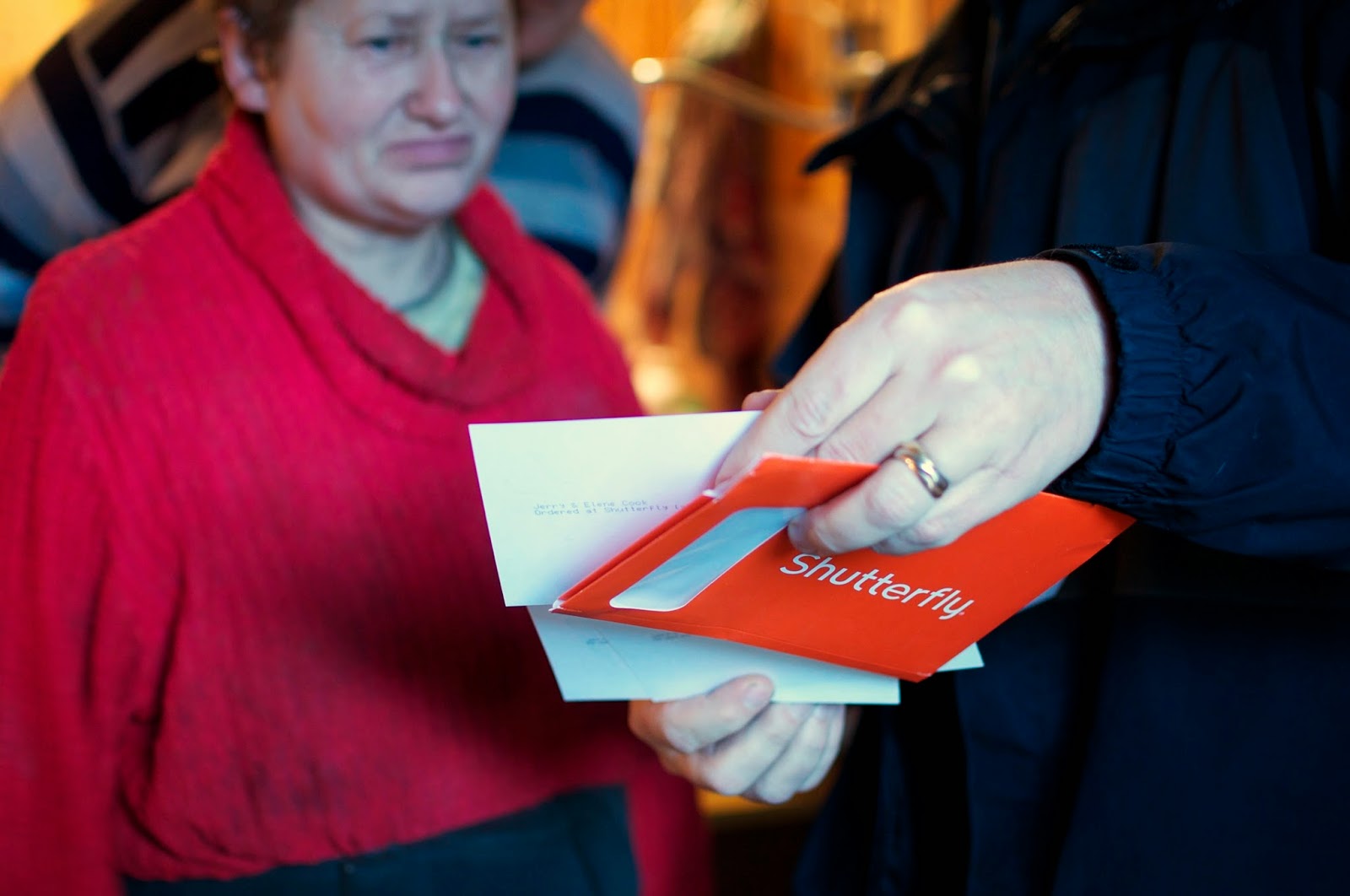 It was SO precious to watch their reactions as we told the story, and gave them their gifts. The look of delight on their faces was priceless! 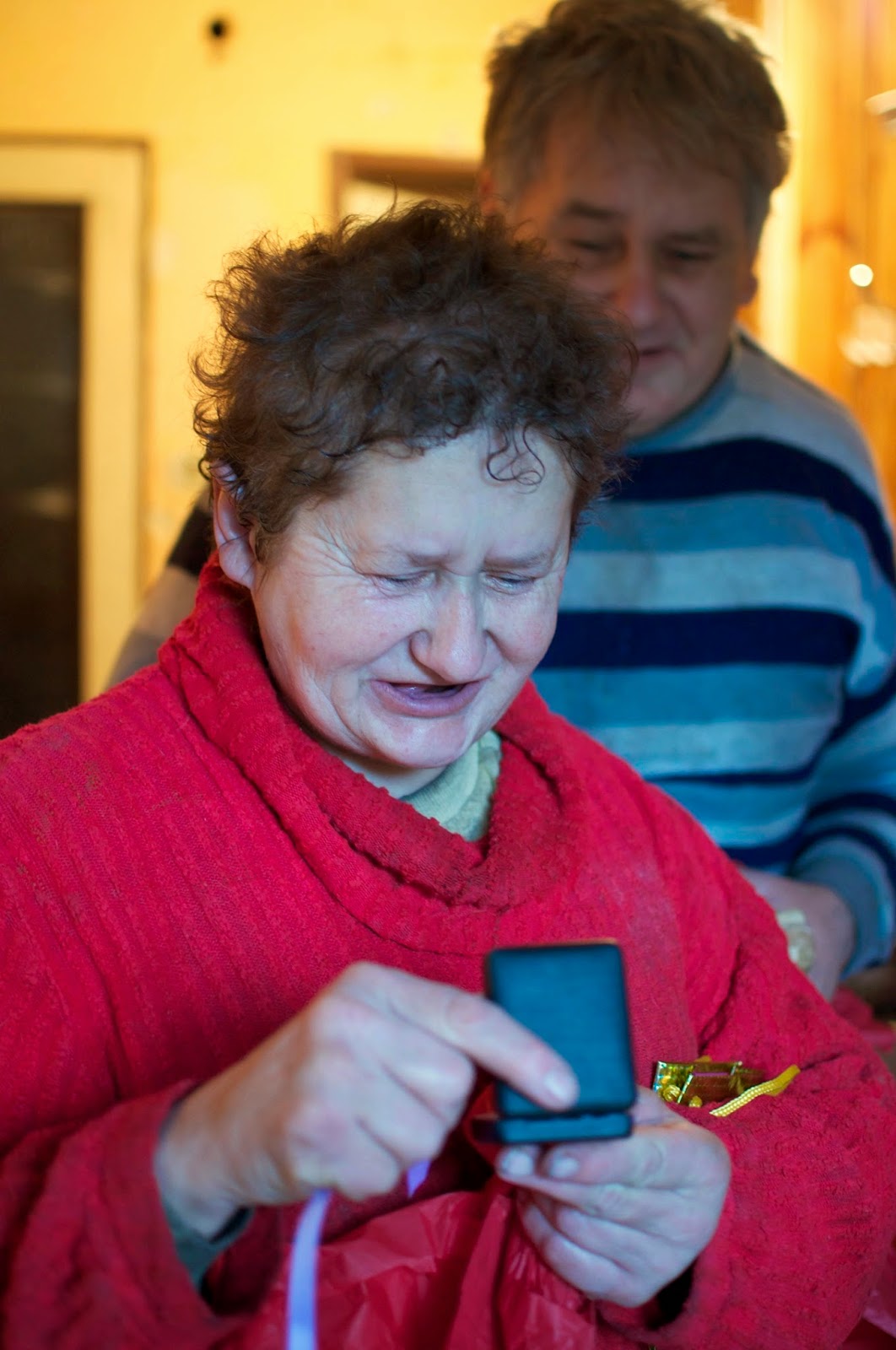 When the sister comes to my door three or four times a week, she always has a smile on her face and a twinkle in her eye, which you can see in the picture above.

She's not smiling in the picture below, but hopefully you can see the kindness in her face, as well as her brother. They are really so dear. 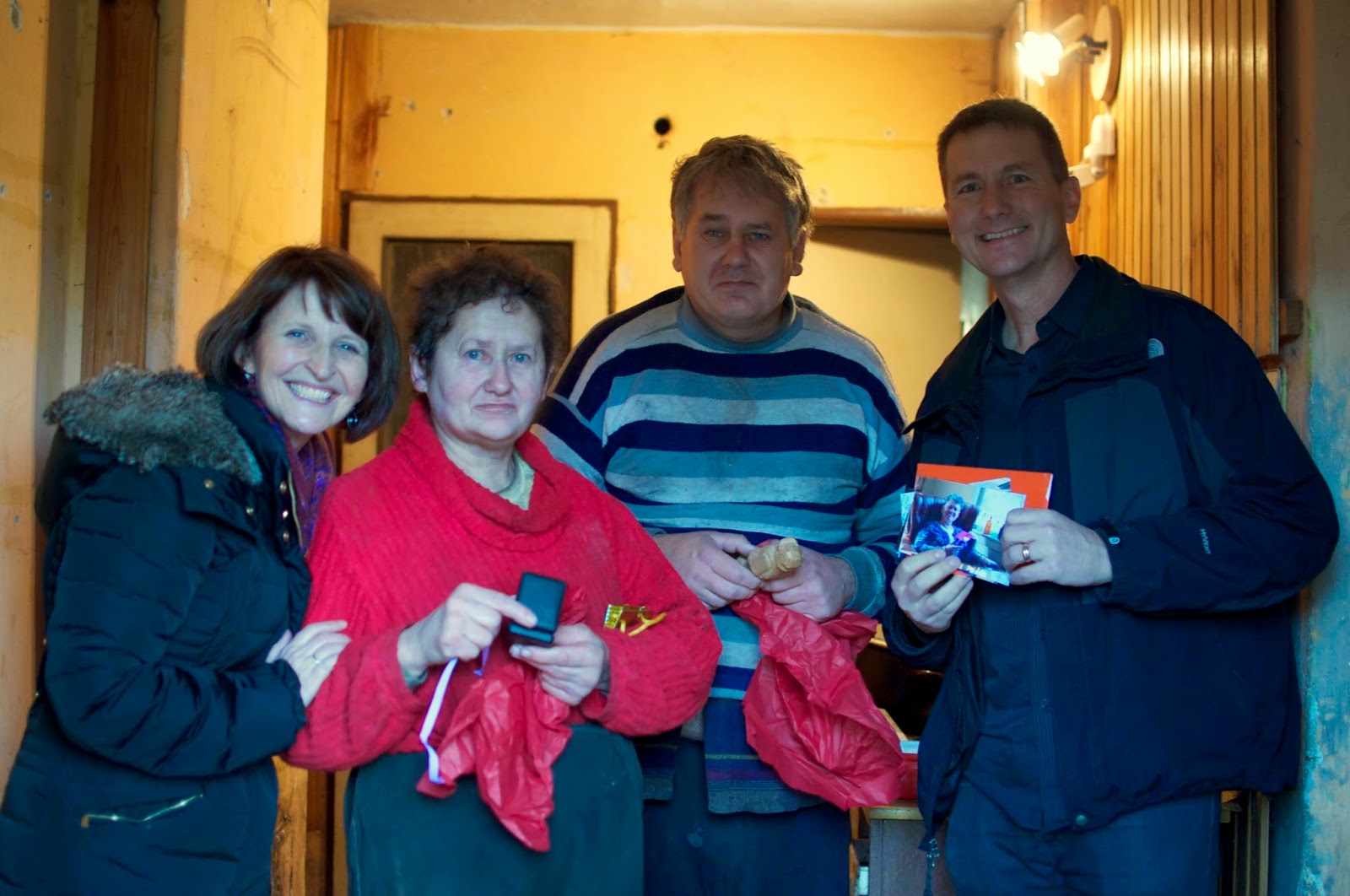 They adore Claire so we couldn't miss getting a picture with her, and with their gifts. They literally pray for Claire every single day (and are so excited she's home for a few weeks!). 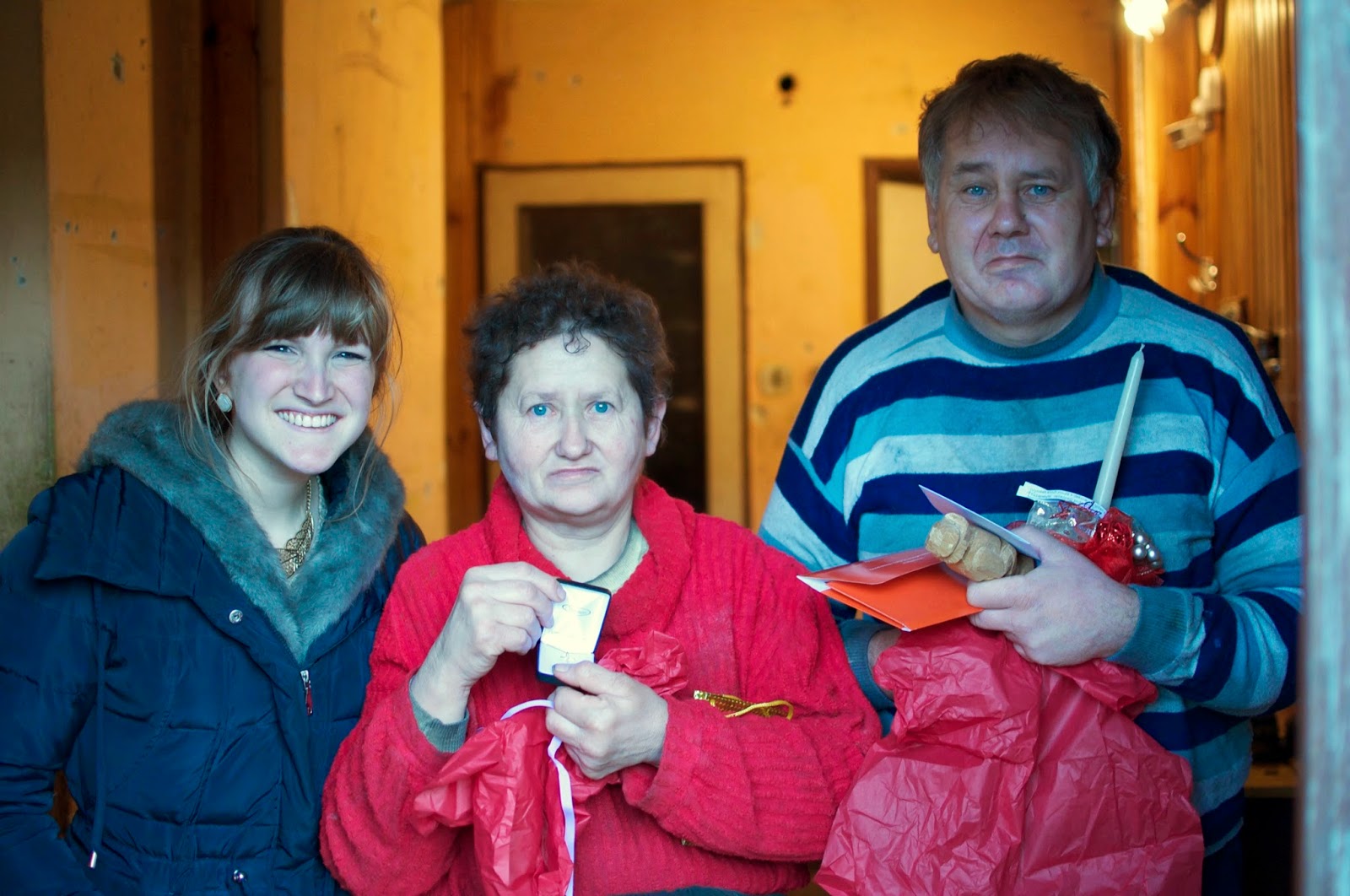 To our friends, Jerry and Elene: "THANK YOU for being so thoughtful to our dear neighbors. I know that your gifts brought them much joy on this day, Christmas Eve 2014, the day they celebrate their Savior's birth." 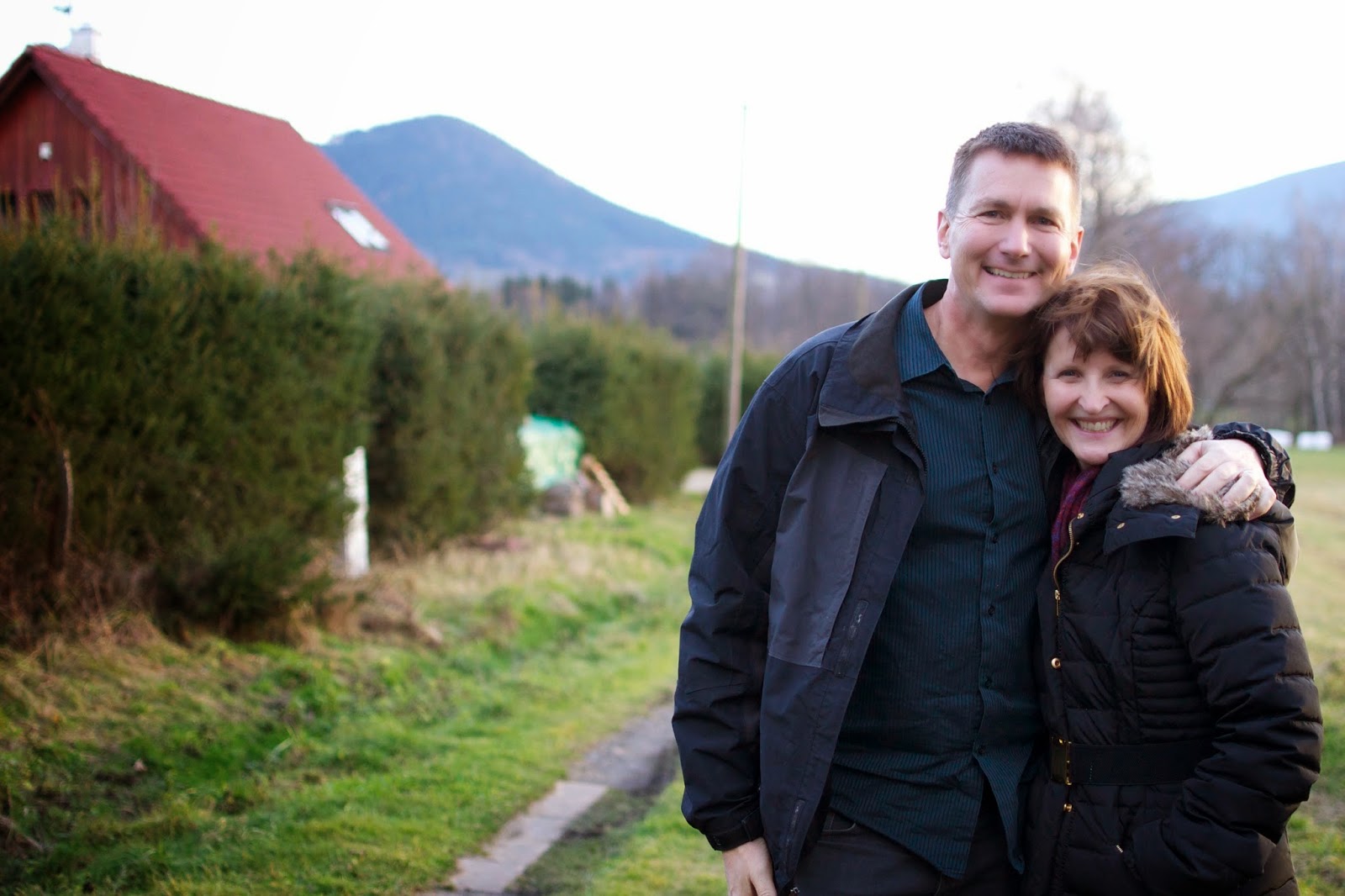