Freezing Rain and Many Troubles

The first clue about the day came as I walked into our laundry room this afternoon and noticed something odd.

A dimpled sheet of pure ice covered the skylight.

Because I'd been busy inside all day, I hadn't paid any attention to what was going on outside.

I had no idea of the treachery that had begun out there. 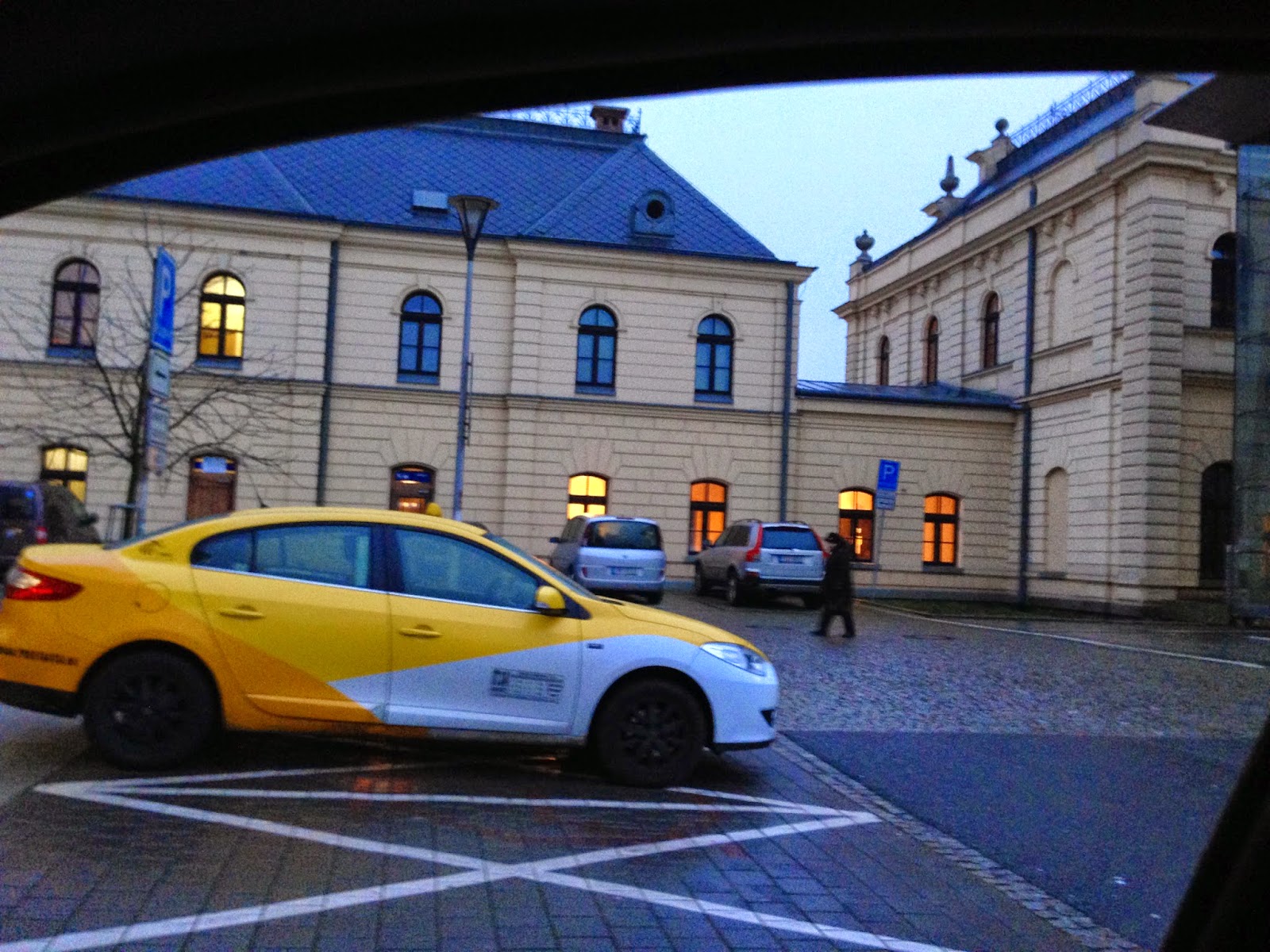 A friend was due to arrive into Ostrava so I needed to get to the train station soon afterward, a thirty minute drive from our house.

But it took more than an hour to get there.

I saw four bad accidents (a semi that jack-knifed being one of them) as I crept along the pure sheet of ice that covered the highway and roads. Thankfully I made it safely to the train station, driving as slowly and carefully as possible. 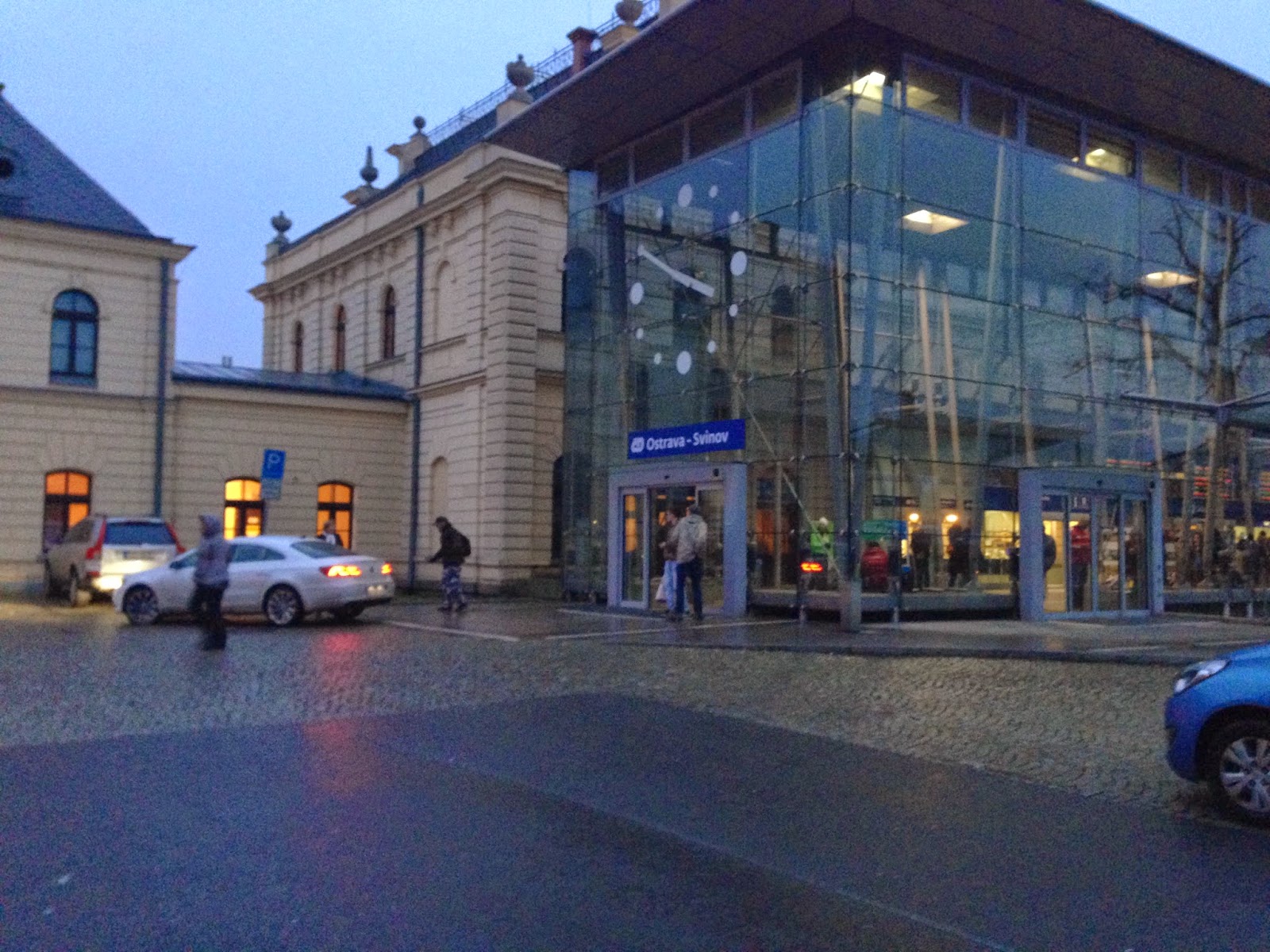 But when I stepped out of the car to go in and look for our friend, I found it difficult to even stand up outside the car.

I'm really not kidding. It was like a Zamboni had just made a pass through the parking lot and left a pure sheet of ice on the paving stones.

With extreme caution, and a little trepidation, I inched walked from my car to the station to find out if she'd arrived. 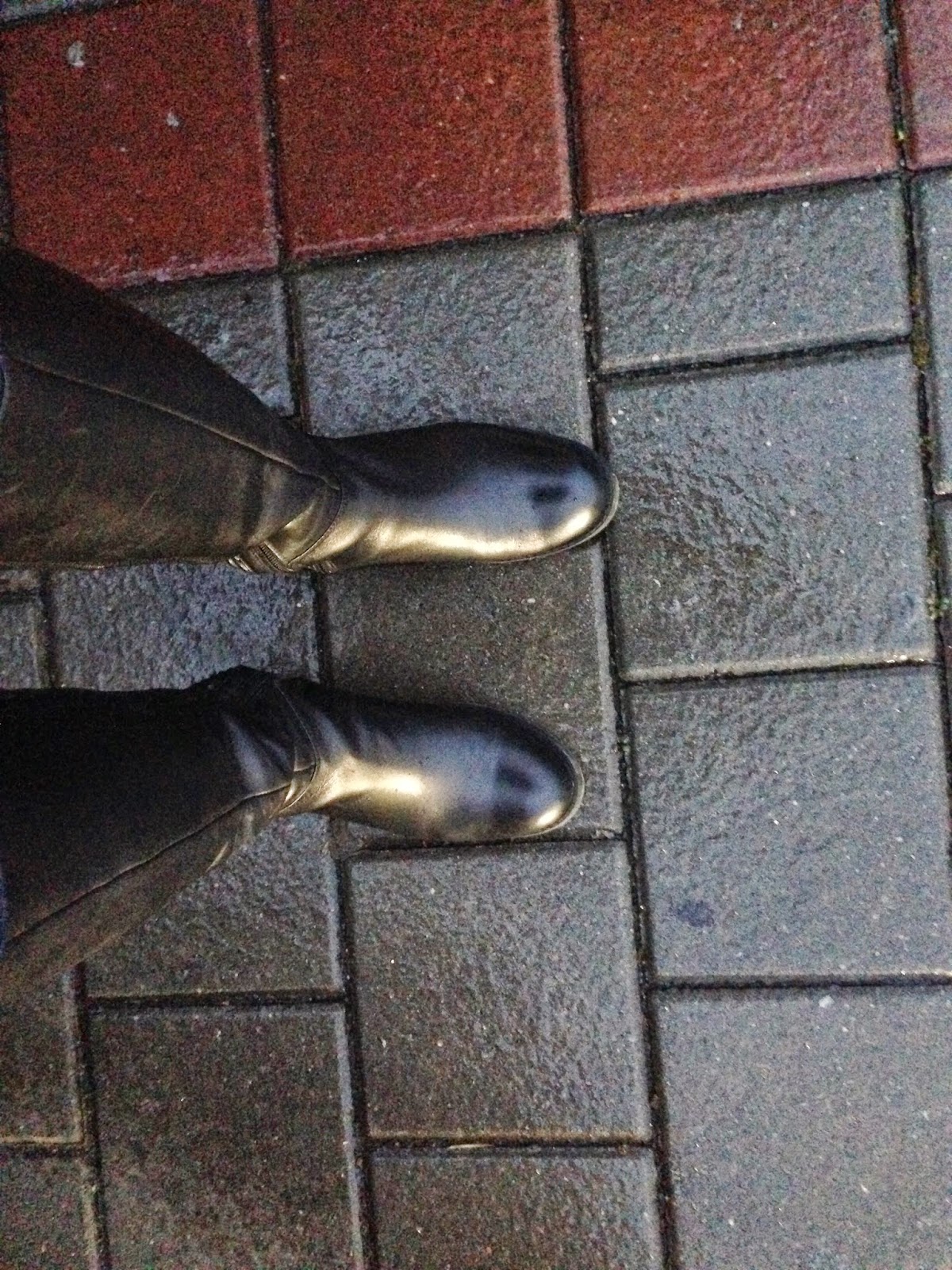 The good news: I made it to the train station before she did.

The bad news: Her train was delayed 100 minutes! 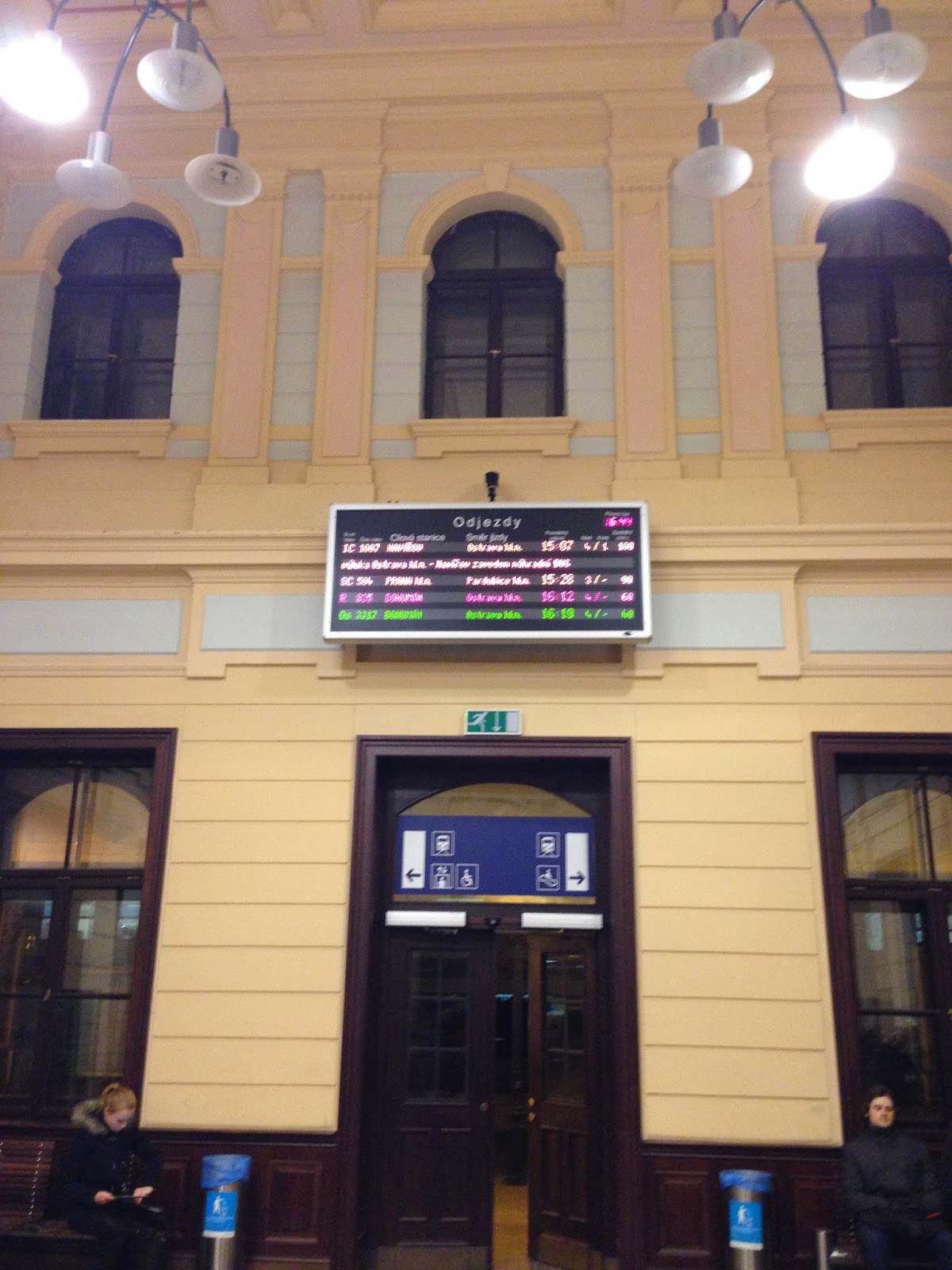 Gingerly, I walked back over to my car to wait, since it was warmer there than in the station.

While sitting with the heater blasting, I watched many people slip and lose their balance, including an elderly woman. Some teenagers nearby helped her up and I could see them sitting in the station with her.

Little did I know they were waiting for the ambulance to arrive and pick her up. Poor lady. She looked like she was nursing her arm and I wondered if it had been broken in the fall. 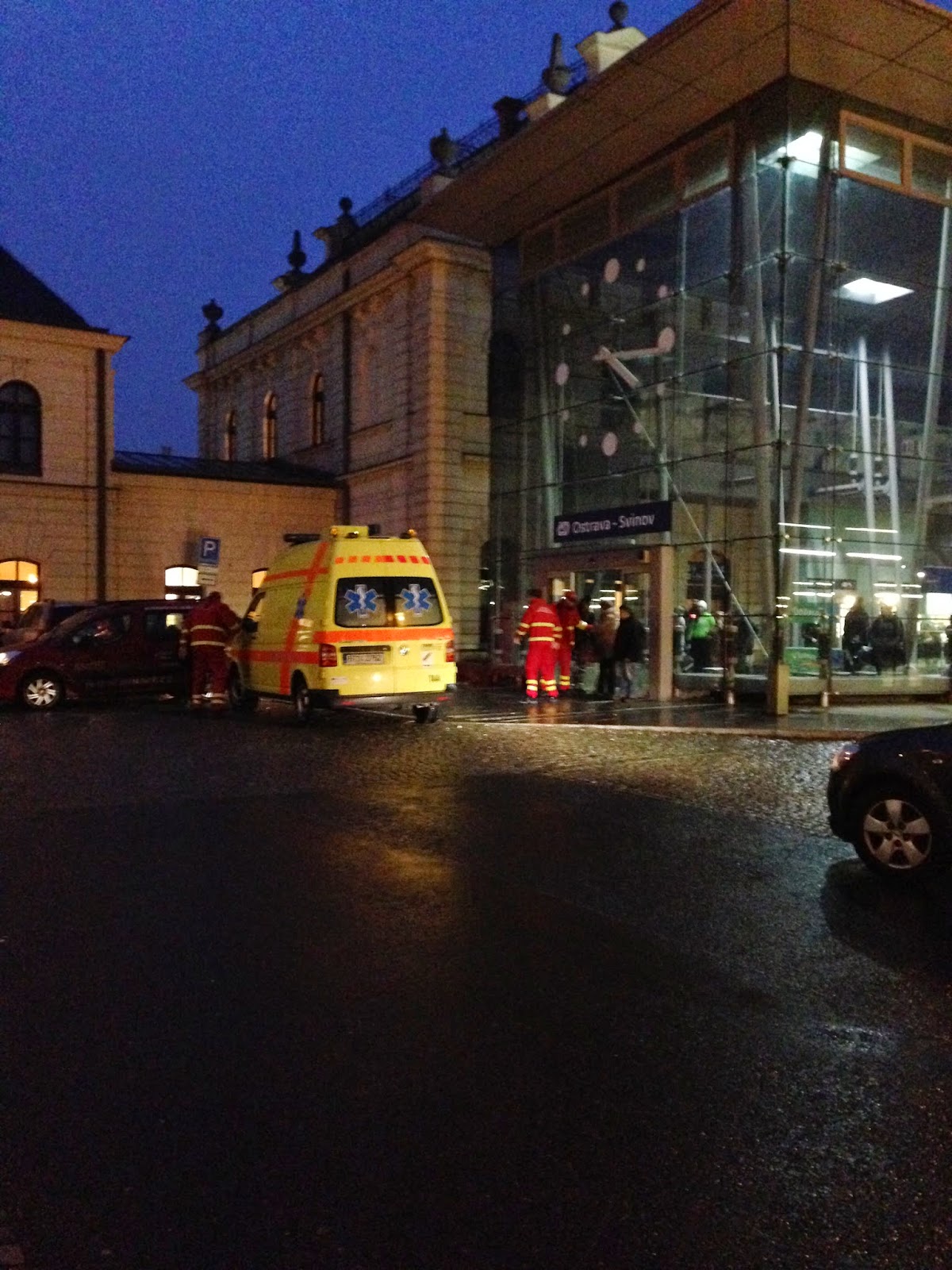 In the meantime, Dave and I were talking on the phone because he was supposed to take a very early train to Prague tomorrow in order to catch a flight to Romania (where he'll be with some of our teammates over the next few days). Knowing that the trains were running late today, he decided to take a train this afternoon in order to make sure he'd be there for his flight tomorrow morning. I booked a hotel room in Prague for him so he'd have a place to stay.

He arrived at the train station to catch his train just as our friend arrived from Prague, two hours late. They said hello and then he rushed in to buy his ticket and get on the train 20 minutes later.

Knowing there were more accidents on the road by this time, Laurie and I decided to stop at the mall for dinner and avoid the emergency vehicles and delays that were happening out on the treacherous roads. With great relief, I pulled into the underground parking lot at the mall and we headed inside.

Somehow in all her travels through the years, she'd never eaten at IKEA so we fine-dined there on their speciality of meatballs, mashed potatoes and cranberries! 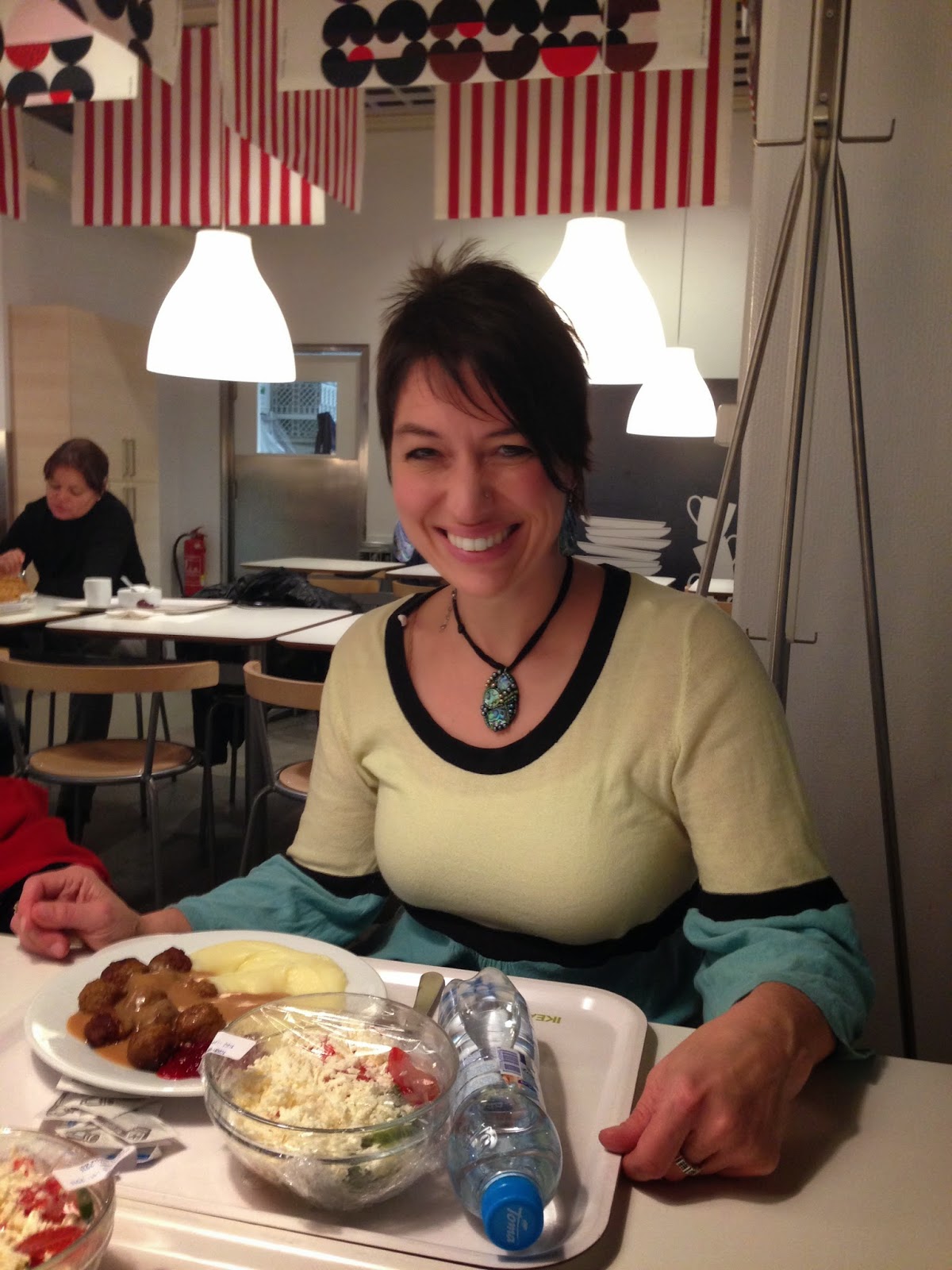 Several hours later, with prayer, we headed back out onto the roads and arrived home safely 45 minutes later - just fifteen minutes longer than usual. Some of the roads had been sanded, though the semi was still stuck with many emergency vehicles there some four hours later than when I'd driven by.

While that's the end of my freezing rain story, it's not the end of the story for Dave.

He sat in the cold train station for four hours, until 9:30, waiting for his delayed train.

And then they announced it was cancelled.

The loudspeaker told waiting passengers that they expected another train to leave for Prague at 11:00, but that it wouldn't get in until at least 5:30 AM. If it made it at all.

Praise the Lord for computers, smart phones and internet! While communicating with Dave by phone, I was able to book an early morning flight for him out of Ostrava, and find a hotel to stay in near there. We hope the planes are able to fly in the morning!

He made it there safely by car and is hopefully getting some sleep tonight before his 5:20 AM flight. His flight to Romania doesn't leave Prague until 9:30 so he's got a little bit of margin if it doesn't fly right on time. But not much!

I suppose he'll have some sort of story tomorrow, and that I'll write an update to conclude today's unusual events.

In the meantime, two of our JV staff are out on another highway, already stuck for 5 hours while the road is closed. You can read their sad tale HERE. (I just looked and see that they made it home after SIX hours on the highway!).

It's been a crazy, icy day here in the Czech Republic.
Posted by Unknown at 11:48 PM