"I need to run errands in Jelsa today. Do you two want to go along?"

Since we had no electricity at our house today (it was off from 8-4 yesterday too), Claire's and my answer to Dave's question was an easy "YES!" 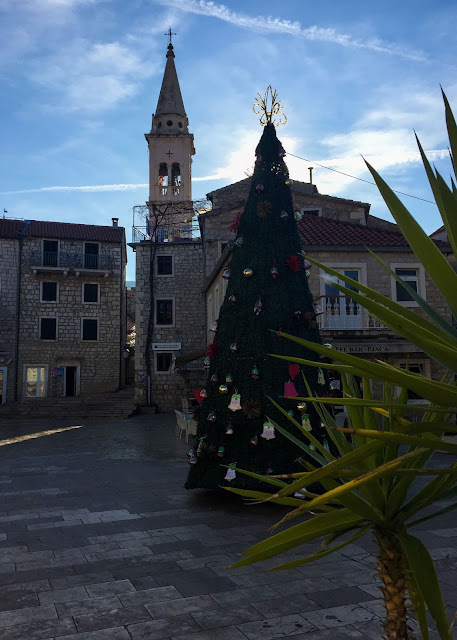 While he ran his errands, we headed for the little town square in nearby Jelsa where we hoped a cafe would be open for coffee. At this time of year on the island, things are pretty quiet and there are very few, if any restaurants or cafes open.

All was quiet in town as we walked into the square. But within just a moment I was sure I recognized someone walking toward us. 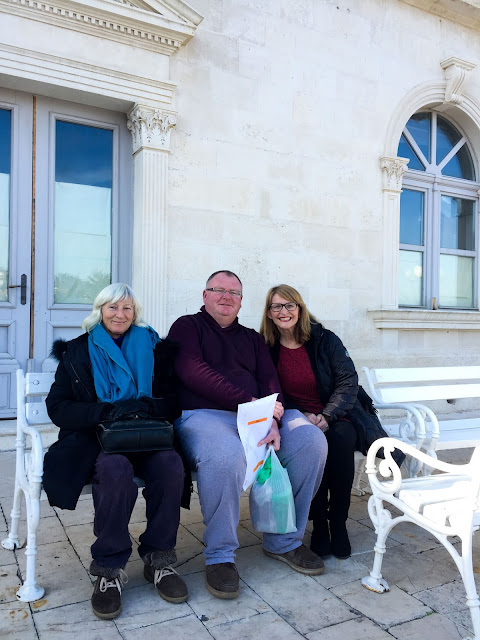 On the left is Vivian, someone I wrote about three years ago that I met here in Jelsa.

The man is Paul Bradbury, a famous (to me!) British blogger whose work I've been reading for years.

He started something called Total Hvar, a blog that shared all sorts of helpful information and stories exclusively about the island of Hvar. He has since expanded his 'brand' to include many other helpful portals about Croatia, including an English news service called Total Croatia News. Given the fact that I'd just read about his upcoming move to northern Croatia after 13 years of living on the island with his family, I was happy that I finally got to meet him before he left!

The three of us even got to sit on "The Bench", something he'd just written about HERE and HERE recently!

After getting over the excitement of seeing Vivian and meeting Paul, Claire and I settled in at the one cafe open while we waited for Dave. 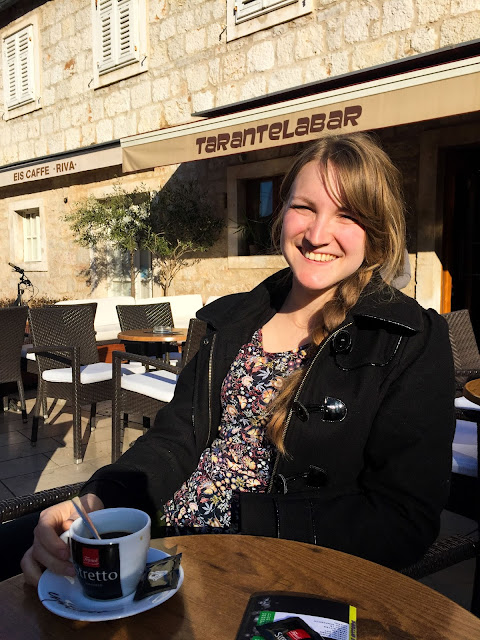 They say it's warmer than usual this December, though you still want a jacket on when you're outside. But oh how peaceful to sit in the sunshine with time to talk about whatever came up!

Dave eventually joined us for coffee, and I had our #1 photographer (AKA Claire) snap a photo of us since I don't get that very often anymore, unless I'm taking a selfie! 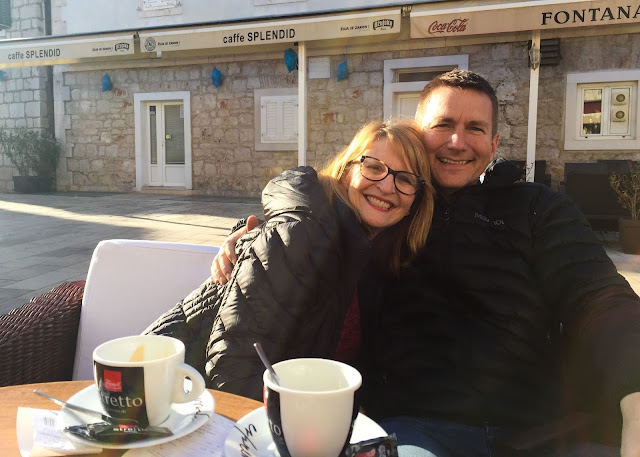 When I say it's quiet, I mean QUIET! Other than a few fishermen who ambled in, and the guy who brought us coffee, we pretty much had the square, and cafe, to ourselves. Such a sweet way to spend an afternoon in December! 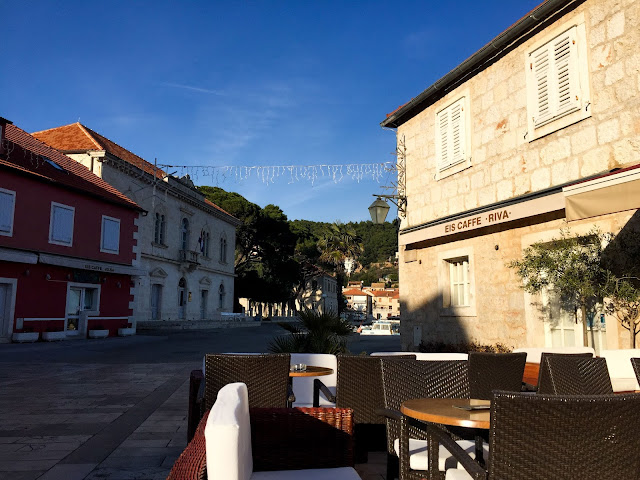 On our way back home, we remembered that a friend of ours was working on a job at the campground we used to stay at when we first came to Hvar. By the time we got there, he'd already gone home. So after admiring his work, we took a little detour down to the beach we are so fond of. 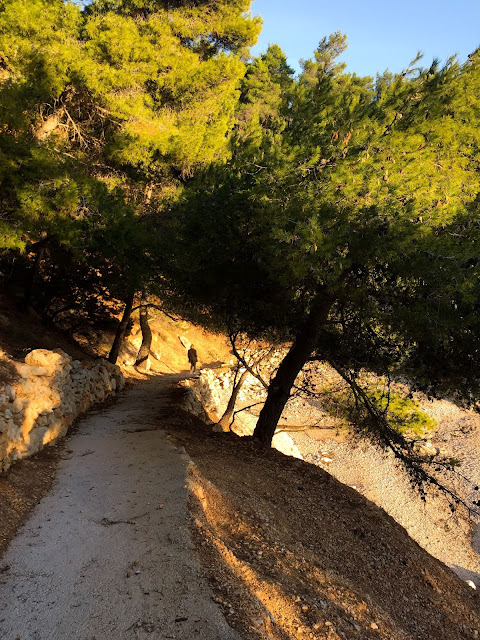 It's a little battered (as in the rocks have been pushed up by storms), but still as calming and lovely as ever. 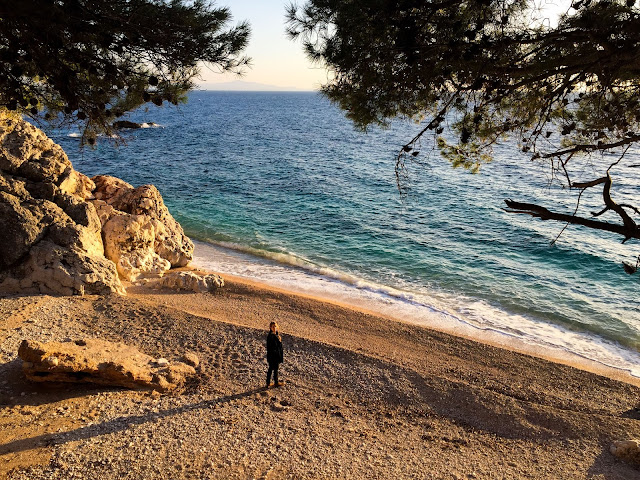 We arrived just at "golden hour" so the light made for some especially lovely photos.

Of course the people in the picture are even lovelier! 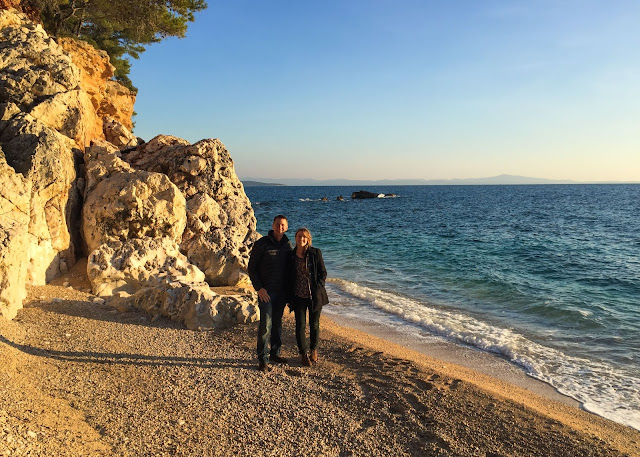 The electricity was back on when we arrived home from our afternoon of errands. But I'm glad we had a good reason to get out today! 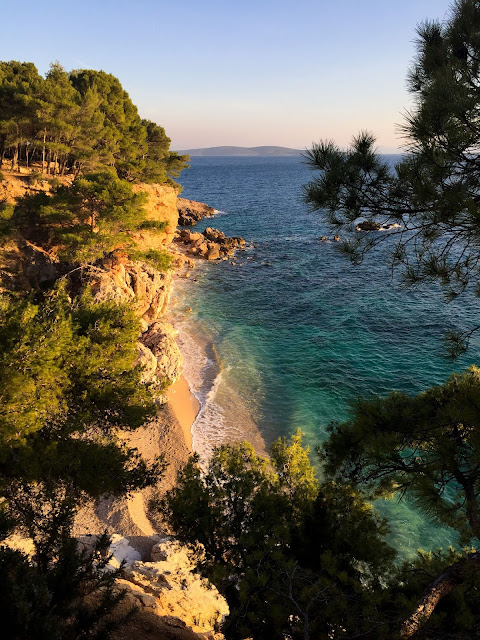