The subject of this blog post didn't, understandably, want me to take a picture of him so I captured what's outside today instead. 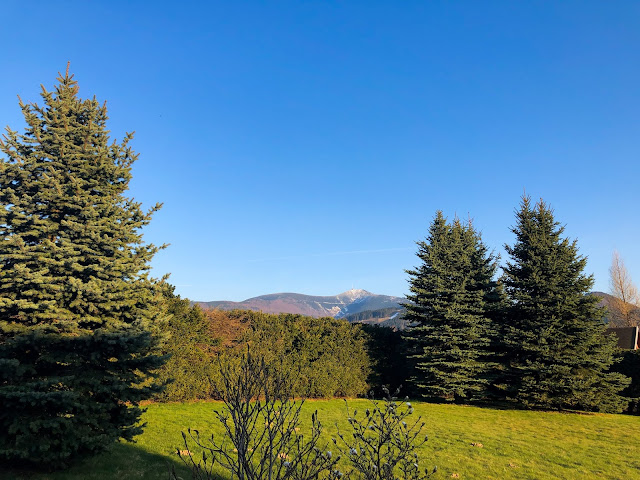 But the real news is that Dave has been really sick this week with something like bronchitis.

He came home from a conference in Germany late Sunday night, feeling miserable.

Earlier in the week he'd been in Bulgaria to see our JV team there, then had continued on to Germany, feeling absolutely fine the whole time.

But as he landed in Prague and began the train ride home, something hit him like the proverbial 'ton of bricks'. And he's been sick ever since.

This is out of the ordinary for Dave as he just doesn't get sick that often.

While this is most definitely of a physical nature (listening to him cough will tell you that), for sure there is a spiritual element to it as well.

Tomorrow, we are due to leave for Slovakia where Dave will be teaching at KPM, our JV Slovak team's largest youth leader training event. He has the opening session tomorrow night. And the topic??

So is it any surprise that he's this sick?? No, not really.

On top of that, we leave on Monday for Israel where we'll be leading an Old Testament study trip with 40+ JV missionaries.

All that to say . . . we need prayer! Dave has been at home all day today, and spent a good portion of yesterday resting too. He's starting to feel a little better, but we need prayer covering for the days ahead!

Thank you for asking the Lord with us for His healing, covering and protection!
Posted by Living By Lysa at 7:09 PM