Last night we arrived in Tiberias, Israel, right on the Sea of Galilee. 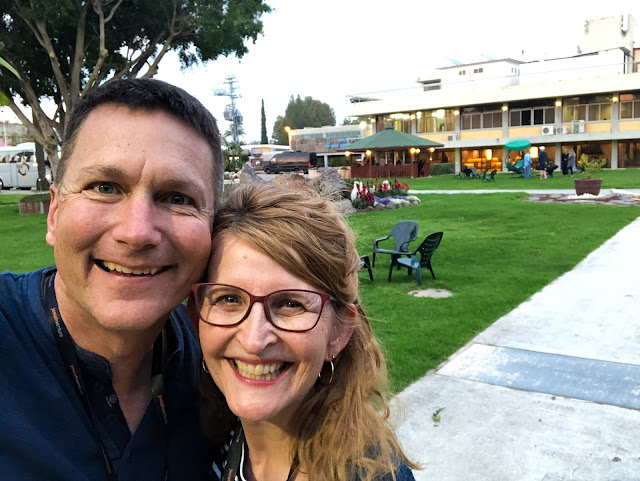 Staying in a new place that we've never been before, Nof Ginosar, we'll get to stay here two nights as we tour sights in the northern part of Israel.

This morning our tour guide had a surprise for us - a boat ride across the lake! We've always gone on it for our New Testament trips, but didn't plan to for this Old Testament study tour. But the agency we work with, Shepherd's Tour and Travel, has been so generous and we're very grateful for this extra addition to the trip! 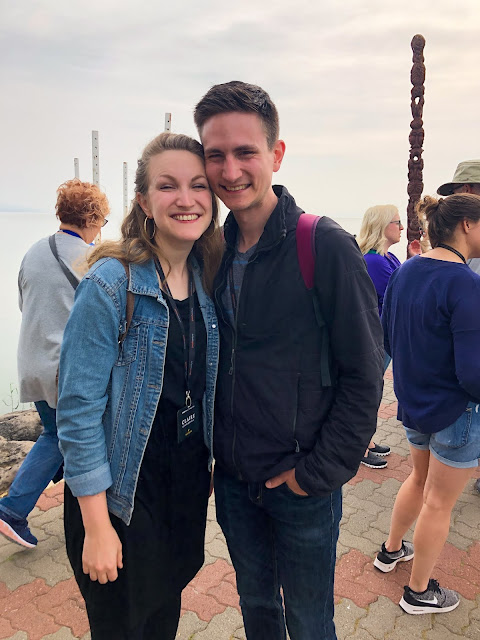 It was a misty morning as we boarded the boat. 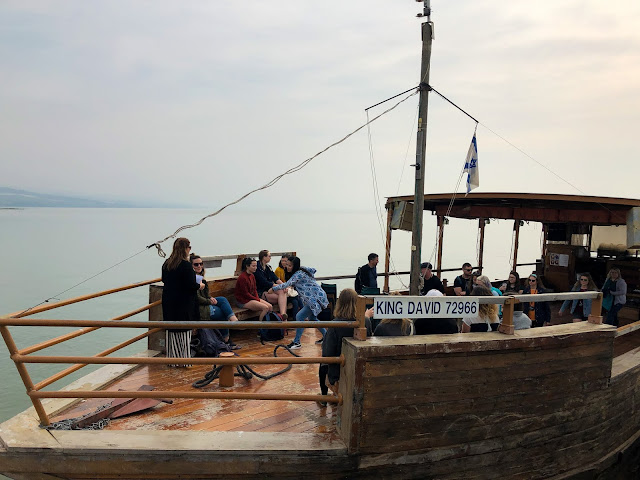 And it was just so much fun to share this experience with our group! 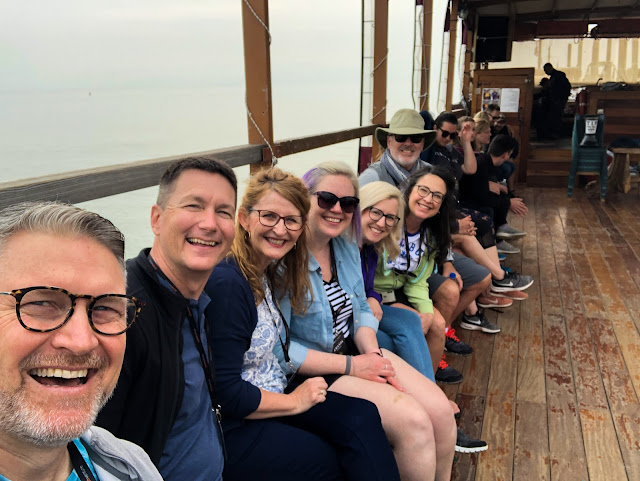 We were again led in worship by Shelby and Christy as we motored our way over to Capernaum. 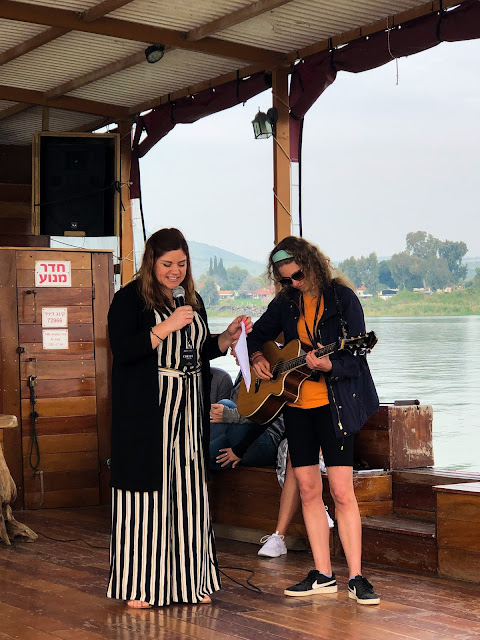 There's nothing quite like being out on the Sea of Galilee, imagining Jesus out here with his disciples. 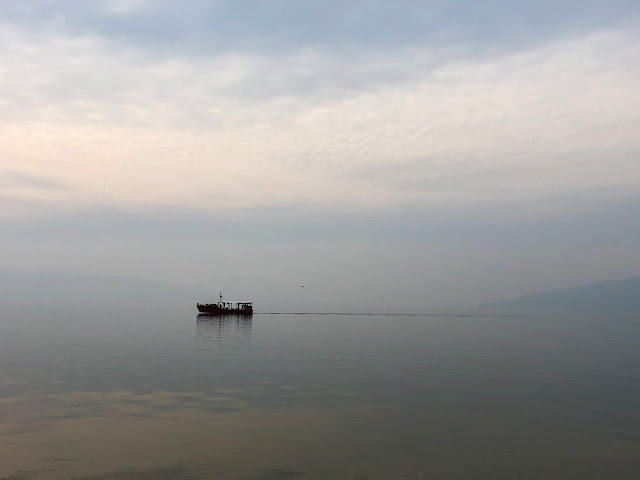 Besides our JV single missionaries, Dave and I, Mel and Amy, and Tyler are on this trip, as well as JV A-team members, Paul and Barb. 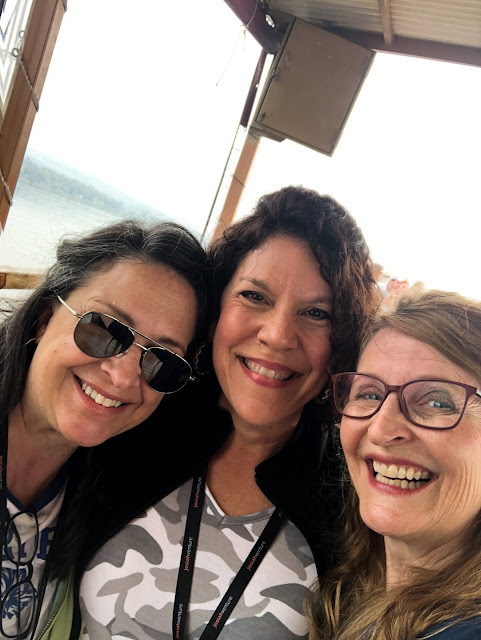 Such delight for us all in getting to share the trip with our dear singles who we admire so much! 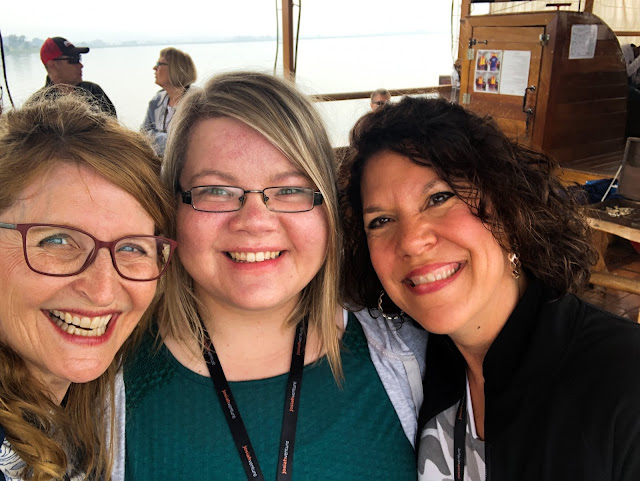 Including our girl, Claire! 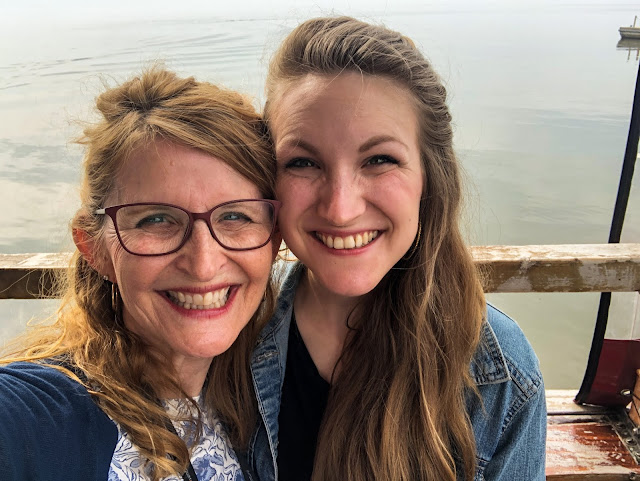 Someday perhaps we'll get to do a trip with our other JV missionary family members, Lara, Caleb and Haley. But for now, it's sure sweet to share this with Tyler and Claire! 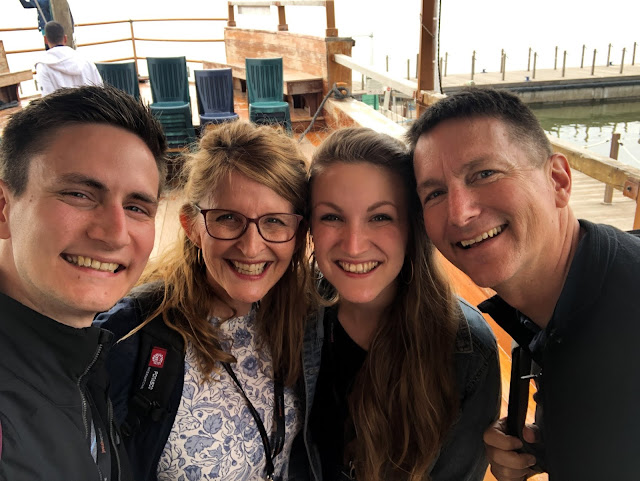 After docking in Capernaum, we took a short bus ride over to Chorazin, a city mentioned in the New Testament where Jesus performed "mighty works". However, because this town, as well as Capernaum and Bethsaida rejected his work (Matthew 11 and Luke 10 record that "they had not changed their ways"), they were subsequently cursed.

Excavations have taken place here since 1962, unearthing a synagogue from the 3rd century made from basalt, a mikvah, olive press millstones and a "seat of Moses" where the Torah would have been read.

Dave didn't sit in it, but did teach here! 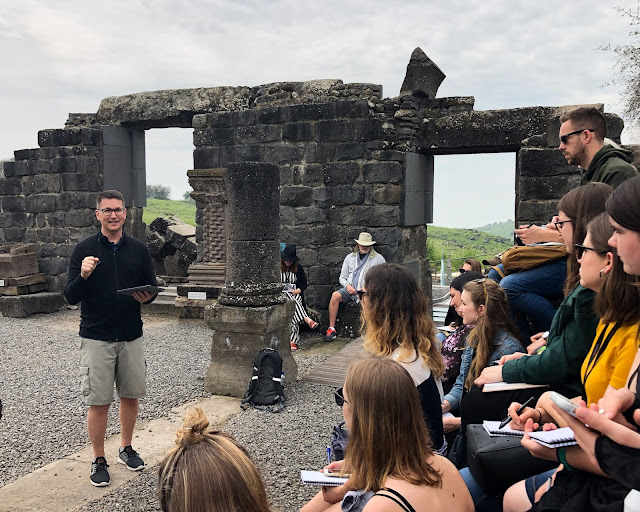 He spoke on "Everyday Leadership", digging into the story in 2 Kings 4 that tells the story of Elisha, and five unexpected ways he used the power of God in quiet ways, off to the side.

Walking us through the story he told how Elisha used the power of God to empower others, to bless the quiet servant, coupled it with his own compassion, fixed what would otherwise have been thrown away, and to meet the need with insufficient resources.

And as both he and Tyler have done throughout our trip so far, time was give for us to reflect and ask the Lord which one of these God was speaking to our hearts about.

Back on the bus after this, we headed way north to another location for more insights into the Old Testament! 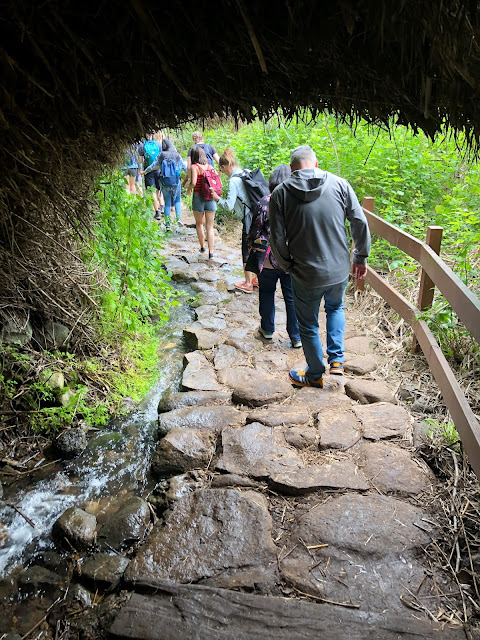 This is Dan, the site of the longest continuous archaeological project conducted in the state of Israel! 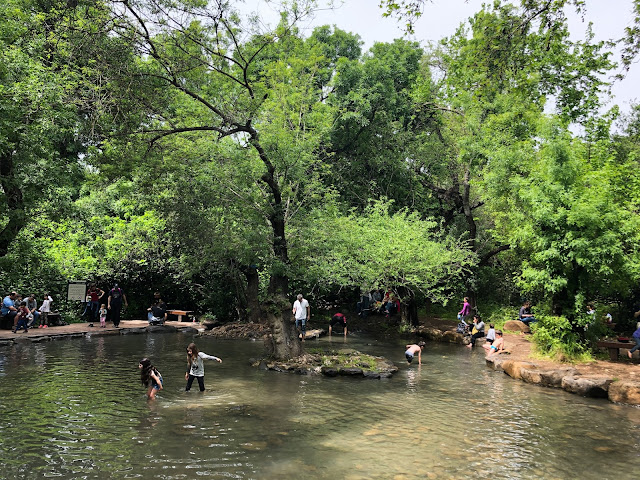 Dan became a place of idol worship in the time of the kings, with the construction of high places where the Israelites wrongly worshipped God. 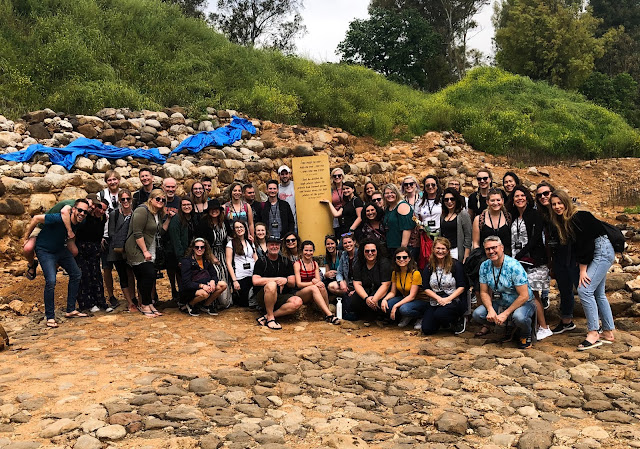 We took a group picture here with this marker since it talks about King Josiah who tore down the high places and whose devotion to the Word of God brought revival to an entire nation while he was still in his teens. This is what we pray for today as we work in Central and Eastern Europe with young "Josiahs"!

Continuing on through Dan, we came to the remains of one of those high places that's been excavated here. 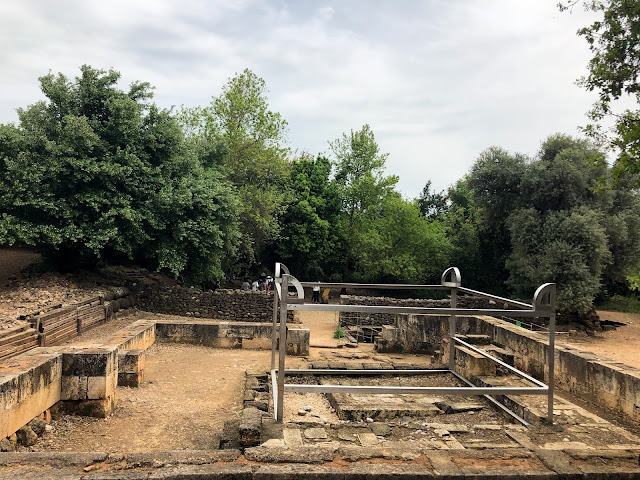 We added more to our "walk through" saying, "Everyone did what was right in their own eyes..." - thus the covering of our eyes! 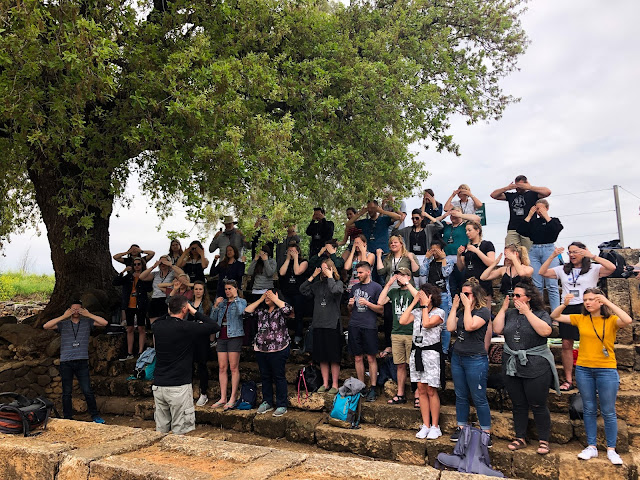 Tyler spoke here, giving us more history of why Dan is significant: the first reference to King David, outside of the Bible, was found here on a "stele", a stone slab erected as a monument. Discovered in 1993, it's been widely accepted by scholars as another proof for the validity of what's been written in God's word. 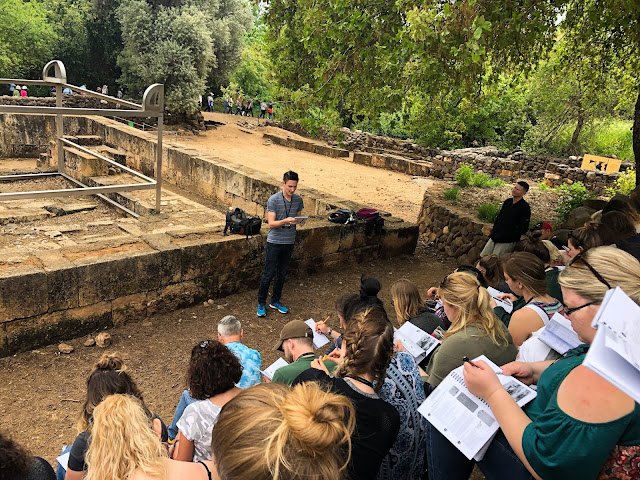 With record rains in Israel this year, the walk through Dan was spectacular! 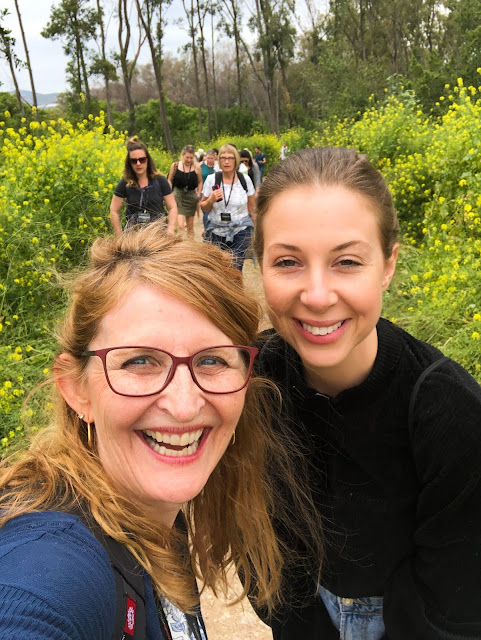 As was "Abraham's Gates"! 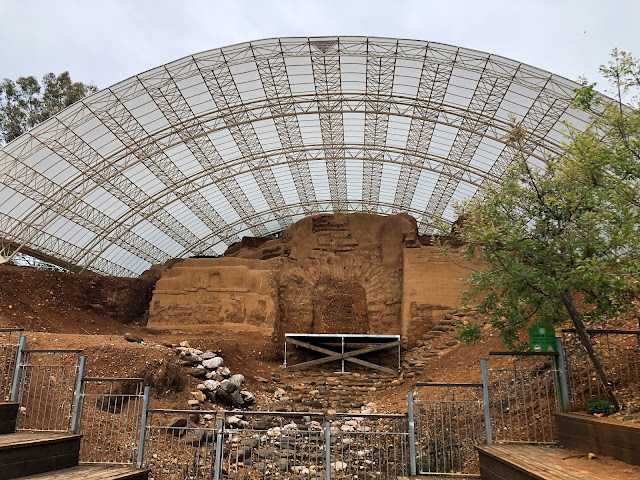 Discovered in 1979 and restored in the late 2000s, it is an ancient structure from the Canaanite period of the Bronze Age, made of mud and thought to have been built around 1750 B.C.E. Authorities named the archaeological site for Abraham, the first patriarch of the Jewish people, indicating that it dates from the period of Abraham.

He may very well have passed through here when he came to Dan to rescue his nephew, Lot! 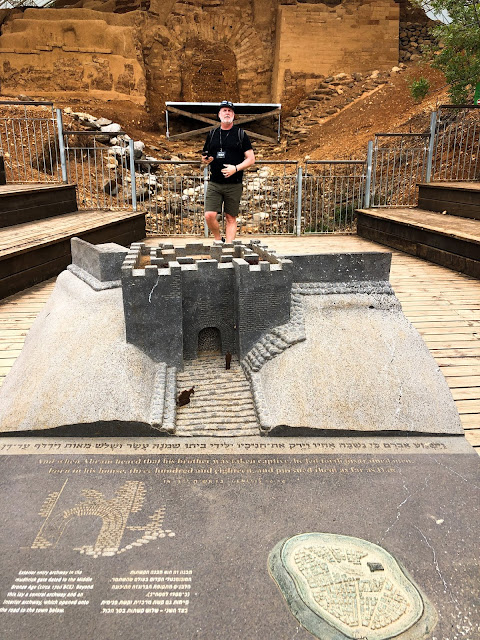 How I'm loving putting pieces together of the Old Testament!
Posted by Living By Lysa at 10:30 PM