Bright and early this morning our group left for Temple Mount, the hill located in the Old City of Jerusalem, that for thousands of years has been a holy site, in Judaism, Christianity and Islam. 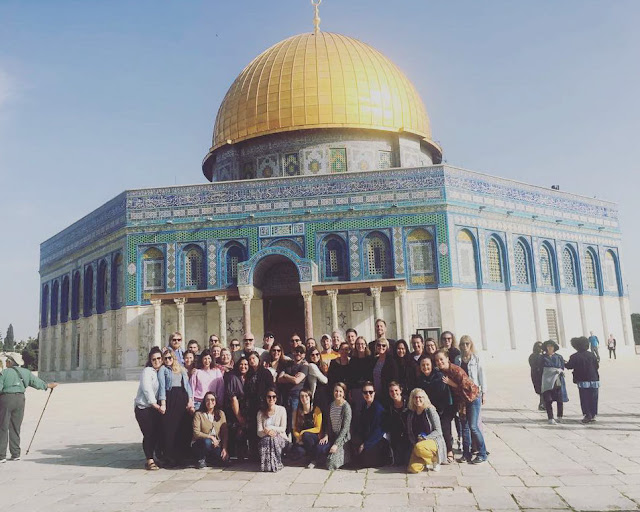 Don't notice Dave and I in that picture? That's because we got hit last night with either food poisoning, or a virus. 😝 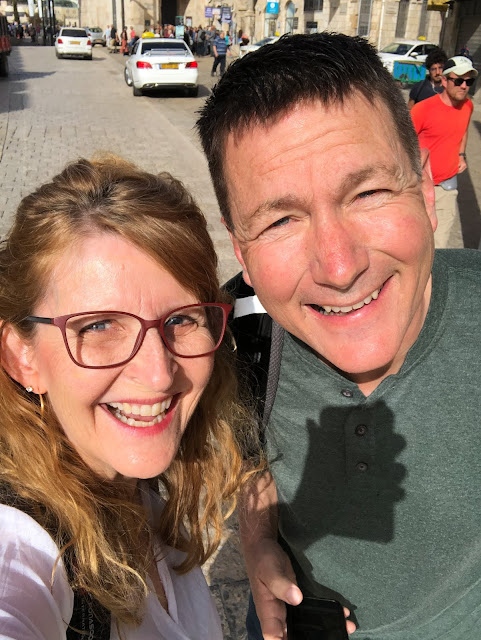 So we stayed at the hotel until it was time to meet up with the group, and then headed out. 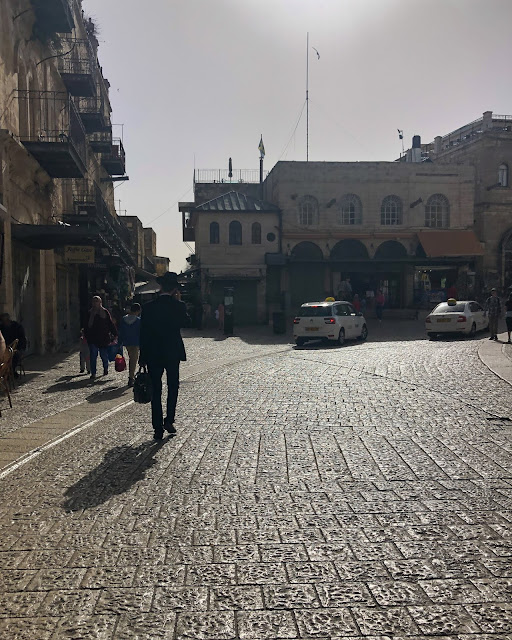 There is something so iconic and lovely about walking through the markets in the morning, before most of the shops have opened. You feel like you're part of the city and not just a tourist. 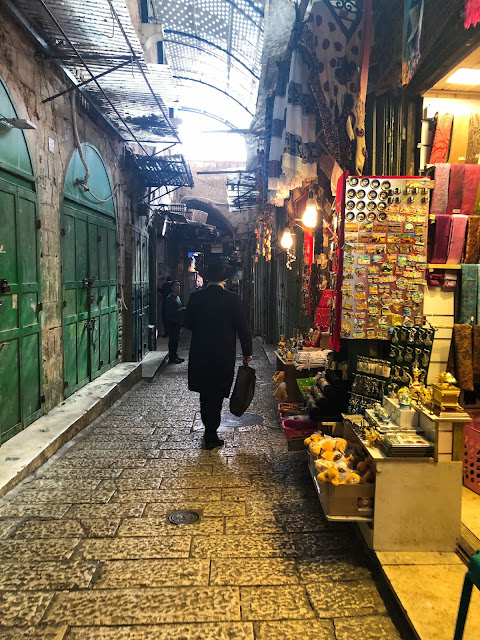 We popped out at the spot overlooking Temple Mount as I was getting a text from Tyler saying they were headed down from there to meet us. 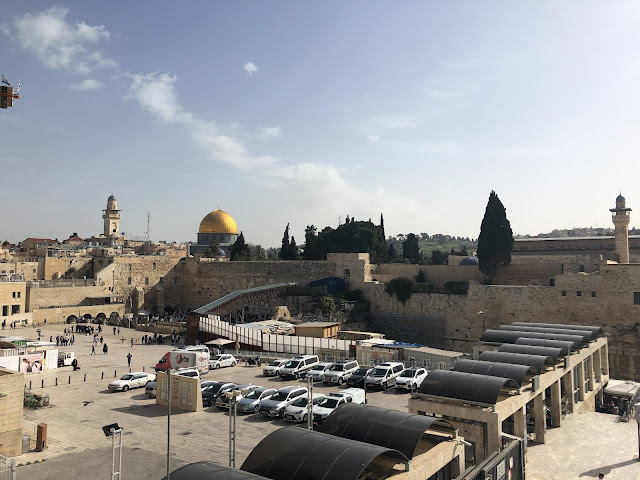 Once we all found each other, we stepped inside the Jerusalem Archaeological Park, located near the Western Wall in the Old City where you see archaeological finds and displays from the First and Second Temple periods: the ancient city wall, the Temple’s staircase, a preserved ancient street, ritual immersion baths, and stores.

But that's not where we were headed today! We found shaded spots under a tree for Dave's teaching. 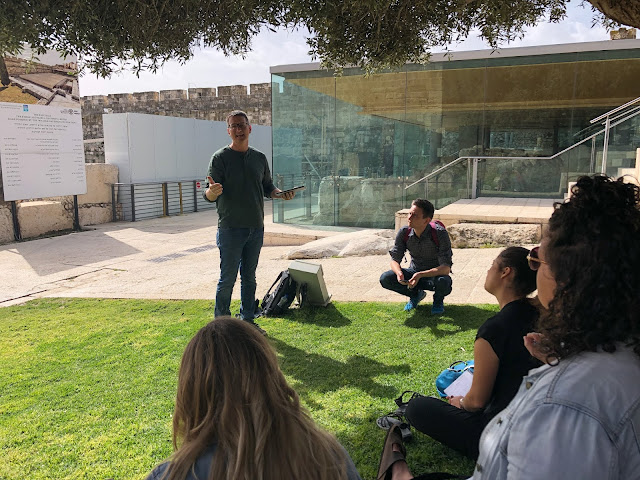 He taught from Nehemiah on "Leadership that Overcomes Inertia". It was so good and timely for many of us as he talked about the seven ways to overcome inertia: fast and pray, change your pronoun (instead of "they" say "we" as you think about solving problems), recruit key allies, research and describe reality, focus the challenge, organize the work and manage your response to opposition.

Whew! Such good stuff! Each of us shared with a partner on what particular point we need to focus on in our area of ministry. 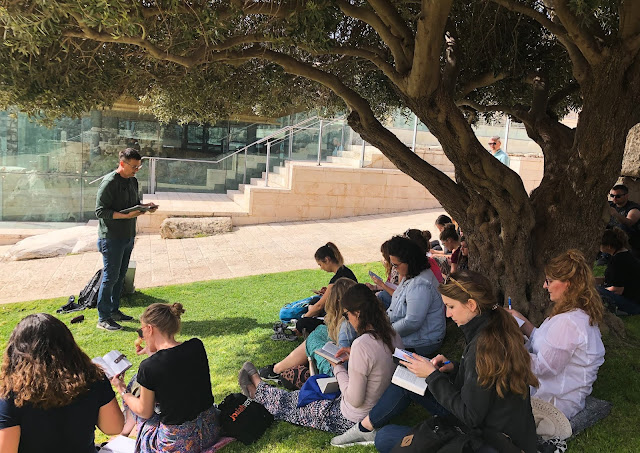 Any guesses who my partner was today?! 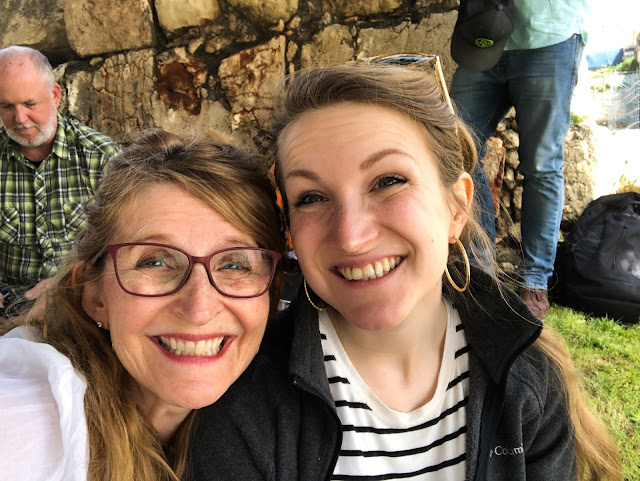 How I love sharing life and ministry with our kids. We never expected to which makes it all the sweeter!

Just as we were finishing up, our tour guide asked everyone if he could share something with us. 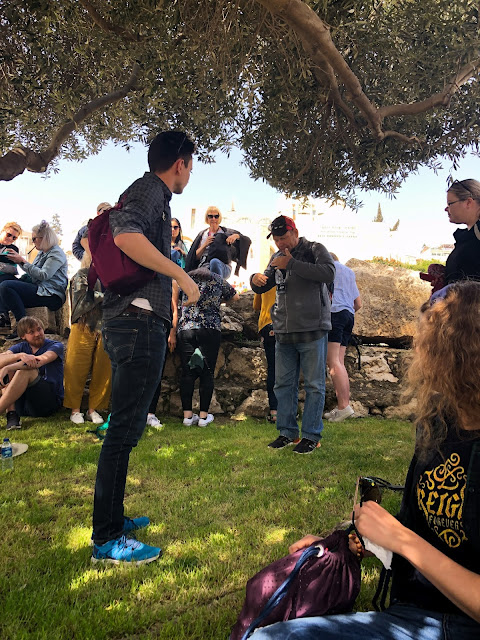 Ron was also our tour guide last year, and we finished the tour in this very spot, with Dave asking if he could pray for Ron before we said goodbye. I have a picture of that moment from a year ago. 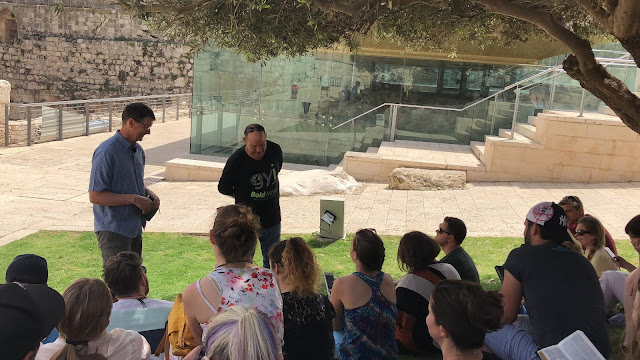 Little did we know how meaningful those prayers would be. Ron was in a terrible motorcycle accident last summer where he was hit by a car going full speed through an intersection where Ron was waiting to turn.

He spent months in the hospital and rehabilitation, all the while thinking on those prayers, he told us. It's a miracle that he survived, and not only that, but was able to be our tour guide this year. He'd only guided one group before us this season, to make sure he'd be okay for all the walking we' do. He was, and we so enjoyed having him be part of our group again this year.

God answered our prayers of protection over him! 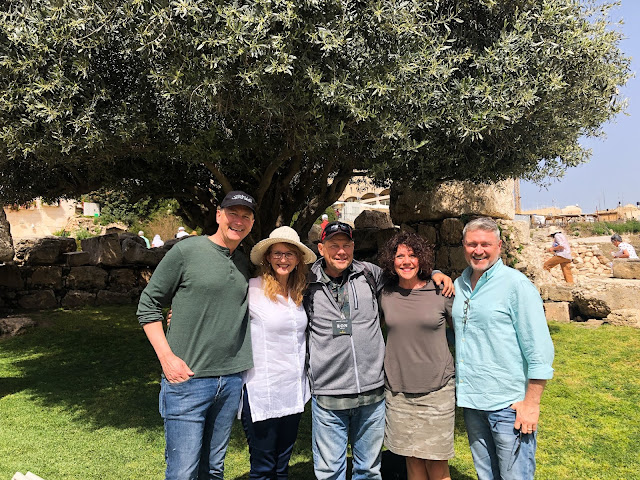 From here we headed over to the City of David, leaving the archeological site and going across the street and down the road to get there. It always amazes me how close things are to each other in Jerusalem! 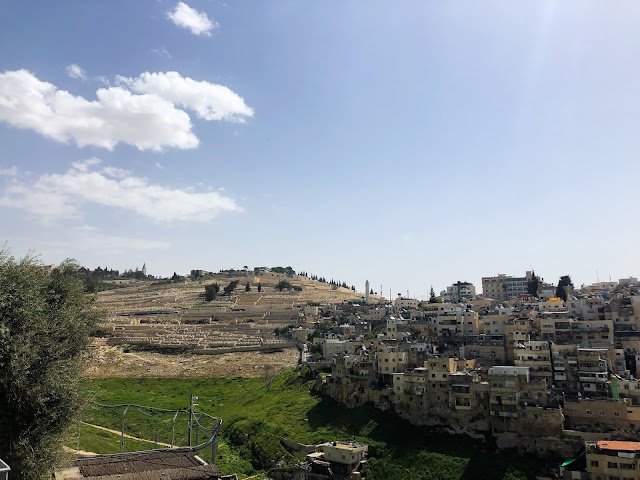 The City of David is an archaeological site which is speculated to compose the original urban core of ancient Jerusalem. The area is one of the most intensively excavated sites in the Holy Land, as well as one of the most visited. 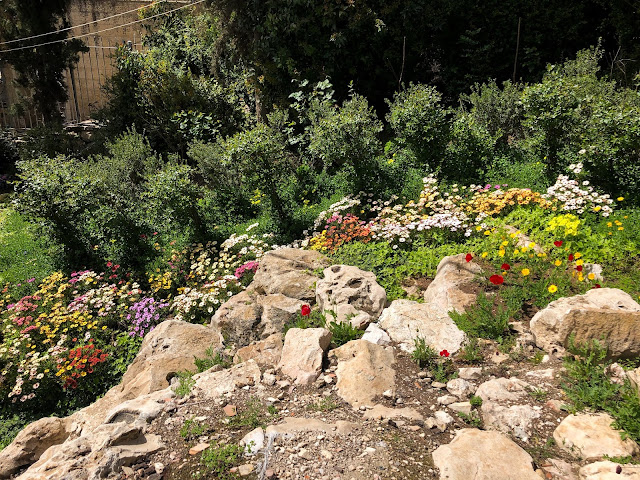 While there is much to see here, we settled into one of the seating areas for groups for another talk by Tyler on how to read Old Testament Wisdom books. 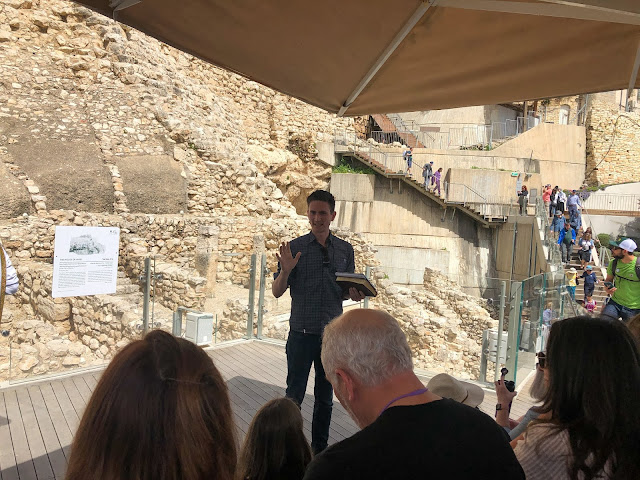 When Tyler was studying a few years ago for his master's degree at Trinity Evangelical Divinity School near Chicago, he took a summer course on Proverbs and spent two weeks dissecting chapter 9, word by word in Hebrew. After giving us an overview of how to read the wisdom books, he went through that chapter introducing us to one of the "characters" in Proverbs, Lady Wisdom! 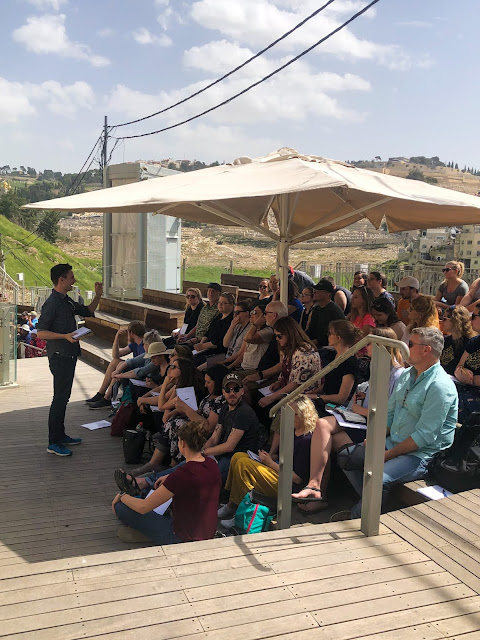 While there is no downside to Lady Wisdom, one of the other characters in Proverbs is one to stay away from. Lady Folly is loud, undisciplined, seductive, and without knowledge -- whose goal is to lead people astray if they follow her. Lady Wisdom calls us to life, while Lady Folly calls people to death.

And the beginning of wisdom? To fear the Lord!

Proverbs 9:10 says, "Fear of the LORD is the foundation of wisdom. Knowledge of the Holy One results in good judgment." 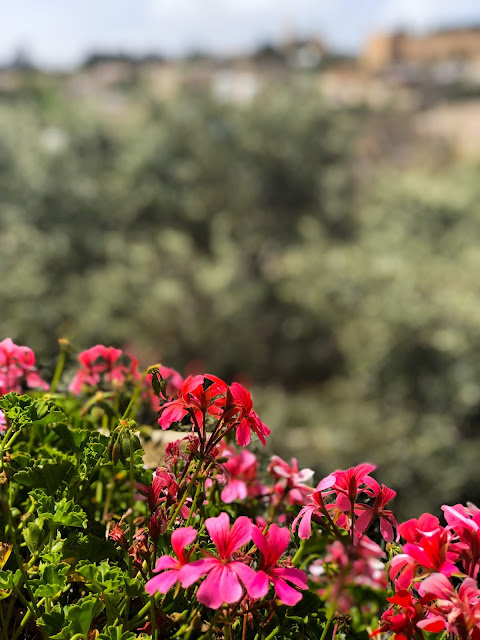 I definitely want that to be true of my life! 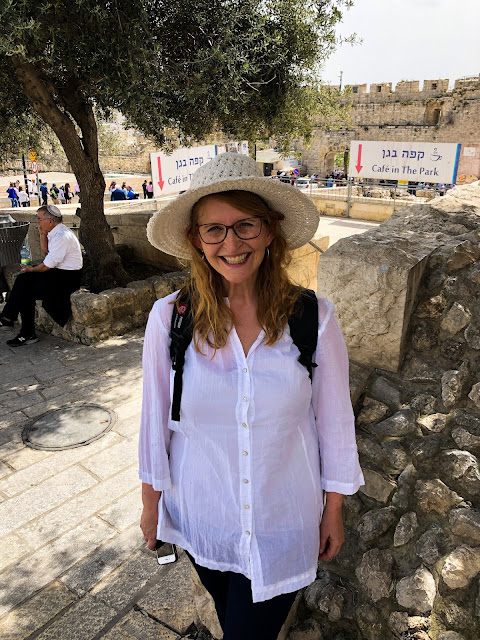 With an afternoon off for free time to explore, Dave and I headed into the Old City for lunch and our favorite frozen coffee drink. Yes, it's ironic to me too that we have favorites in Jerusalem! 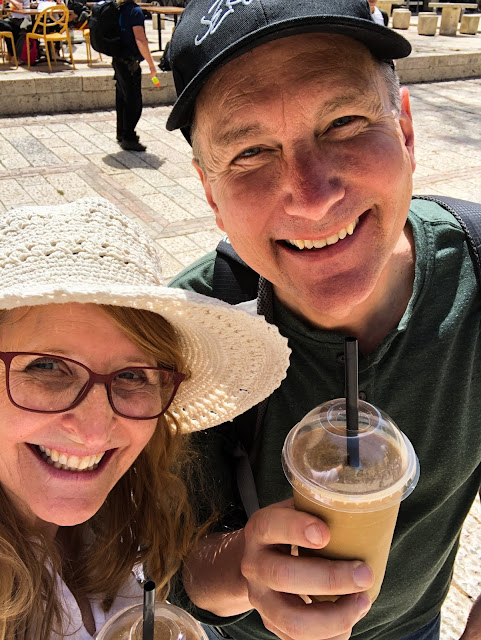 There's more to this day, but that will take another blog post to share!
Posted by Living By Lysa at 3:00 PM