During this week of JV fall conference, we have family staying at our house.

And every morning, this happens before these guys head up to Malenovice! 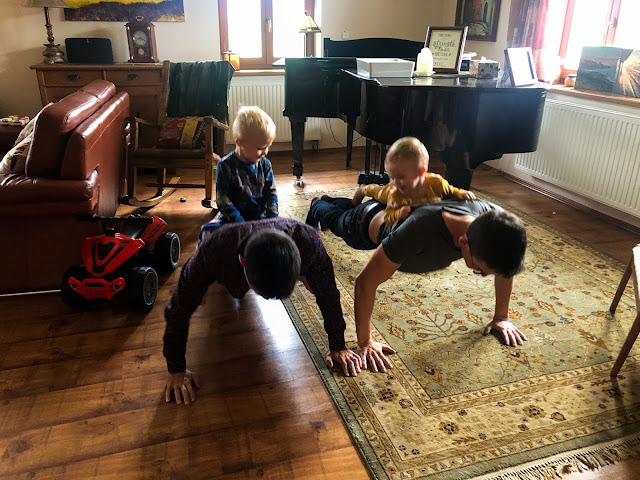 Those are some pretty serious "trainers" on the backs of those dads! "More push ups", they cry out as they sit on top. 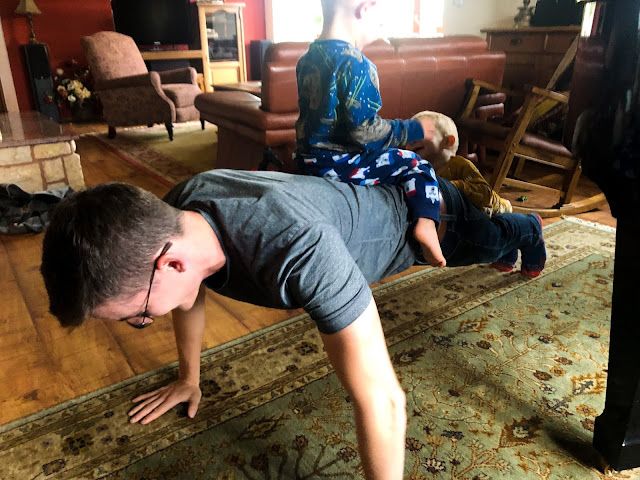 And then this morning, both Charlie and Asher climbed on Caleb's back! 😂 He's got seriously impressive push up skills!

Today is a little different day as it's these little guys' turn to head off in the car. 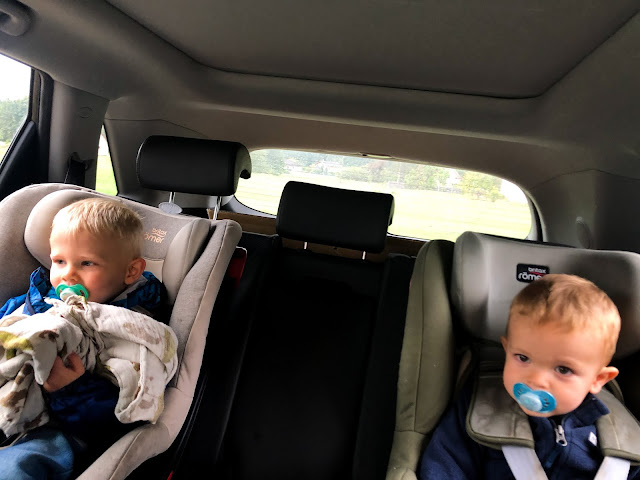 With me as their driver! 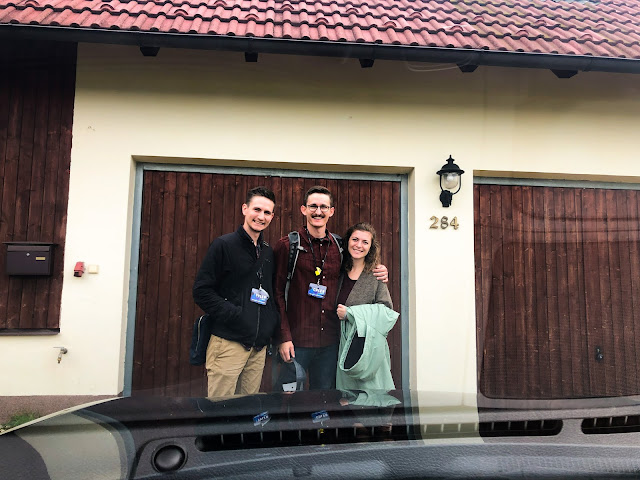 We said goodbye to Tyler, Caleb and Haley (Lara had already gone to take Judah to školka), to head into Ostrava.

I had asked Haley a few weeks ago if she'd like to take my spot at conference one day, and she said yes...which meant that I'd get to spend time with Charlie and Asher. Of course I assumed that I'd do it at our house...but last week a notice showed up on our telephone pole (yes, that's how it works here!) saying the electricity would be off from 7:30 AM - 3:30. So off to Ostrava we go for the day! 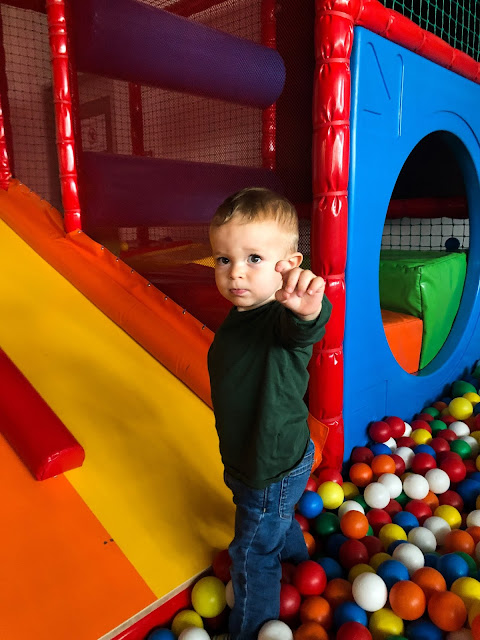 Lara told me about a play place downtown where I could hang out with the boys, so that's where we headed.

Only to find out that it had changed location! 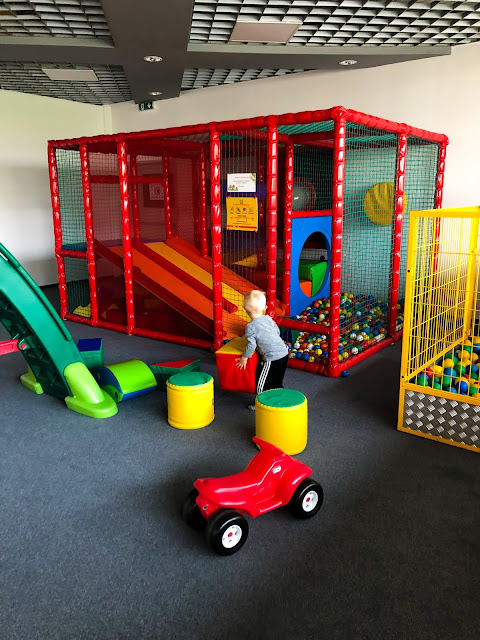 I actually had to have her come and make sure I was in the right place (she was at home, working on her Czech language so had time) since it didn't look like what she'd described. But once we got settled, she went home, and we started having fun! 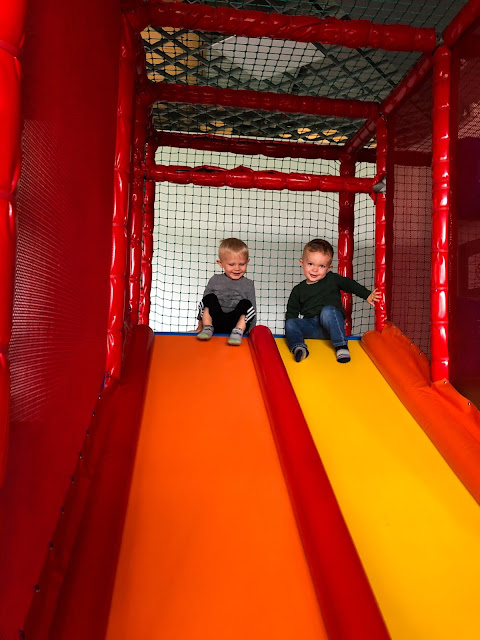 These two were SO funny all morning here! Up and down, up and down...over and over again! Who knew a slide could be so entertaining?! 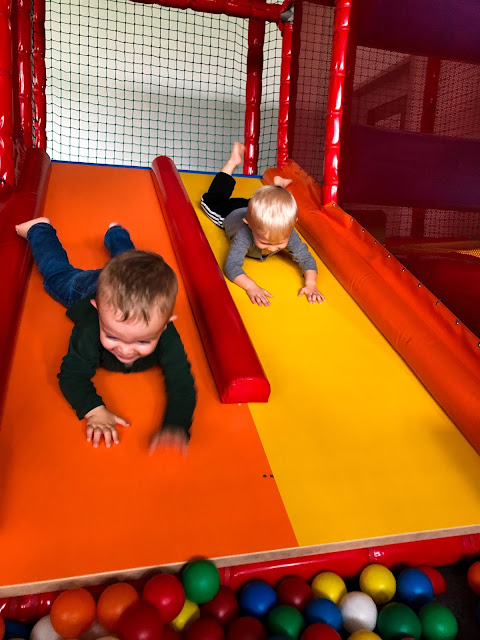 Not only that, but a slide INTO A BALL PIT!! Asher even figured out how to jump off into the pit. He's fearless! 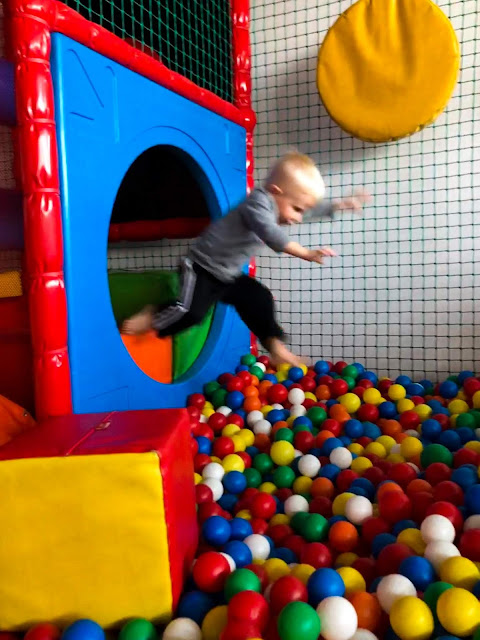 These two were also all about their snacks, taking numerous breaks throughout the morning to come sit at the kid sized table to enjoy what their mommies had packed for them! 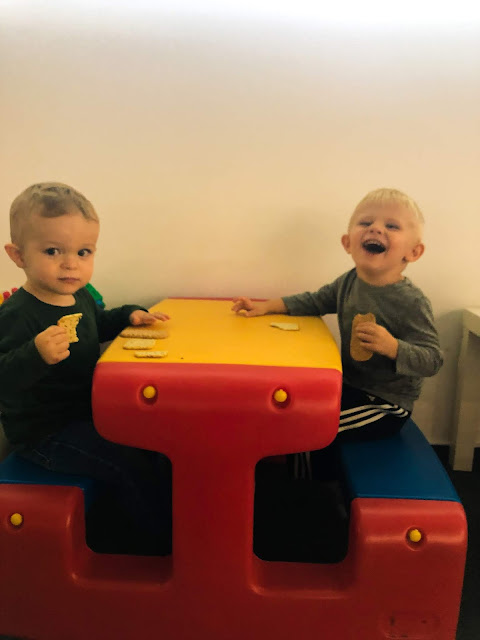 I tell you...their moms did an incredible job of making sure they had everything they needed. They made Nonnie's job easy (which you know, is to do the extra things...like pay for a car ride! 🤣) 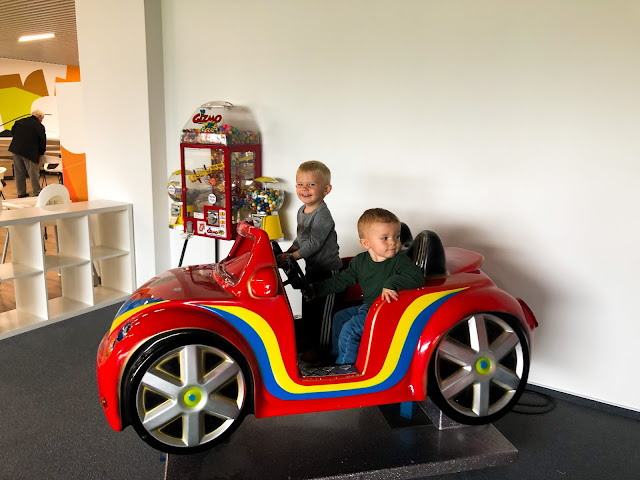 These two were a bundle of energy, never staying still for more than five seconds. At least that's what it seemed like! But I did catch Asher being still as he sat in his "fort" (that's what he told me it was!). Charlie came behind him and changed it from a fort to a tower! Oh these boys! How fun it was to watch them interact! 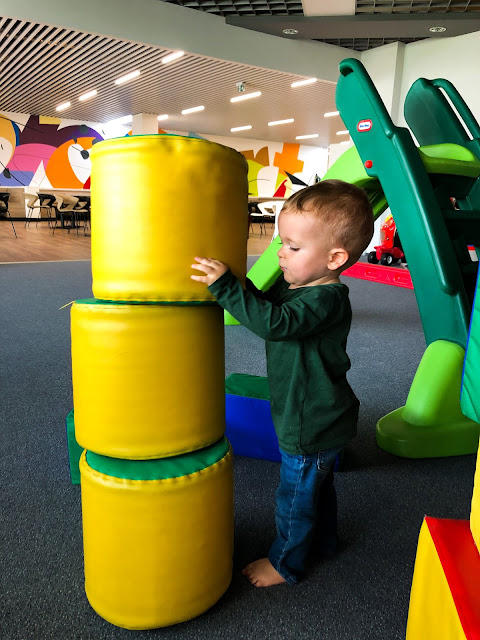 After one last climb up the slide (bare feet are a MUST!), we packed up our things. 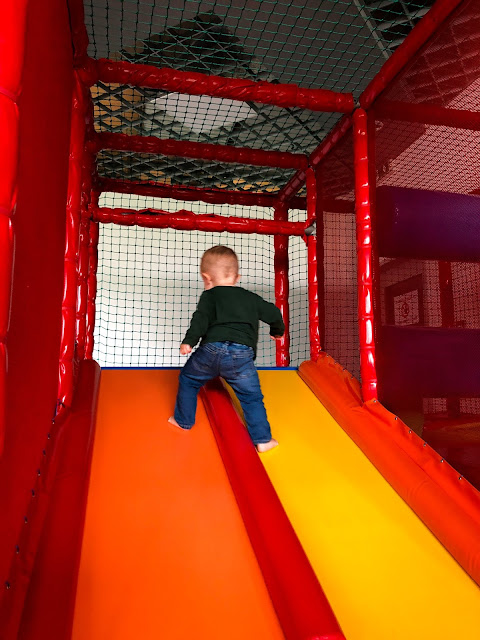 I can't begin to imagine how moms do it out alone with twins...which is basically what these two are age-wise! 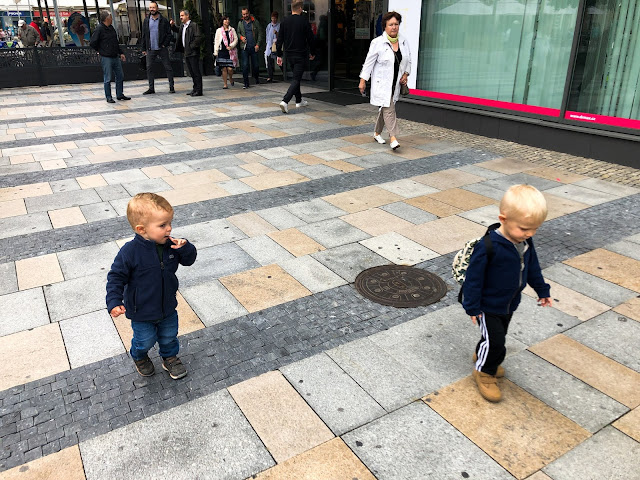 We just had a few hundred meters to walk and it took seemingly forever to get to the door of Tyler and Lara's apartment building! 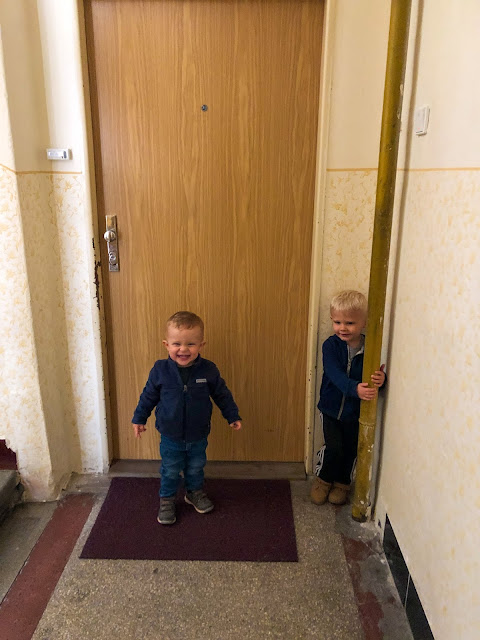 There was definitely some relief in this Nonnie's heart when we made it there safely.


And look what they went to play on as soon as we got in the door! 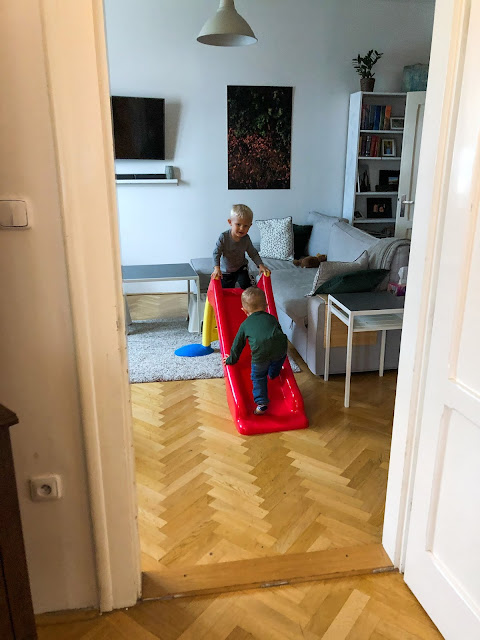 Lara says that slide is the best purchase they ever made for something for the boys! I believe it!! 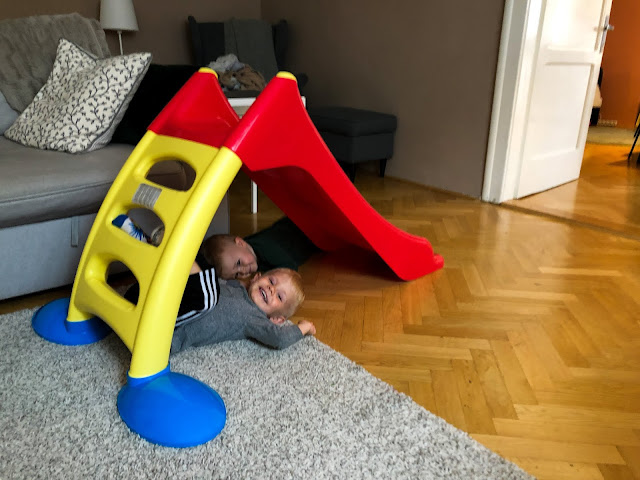 The three of us had some snuggle time on the couch, and grabbed a selfie, before it was time for naps. 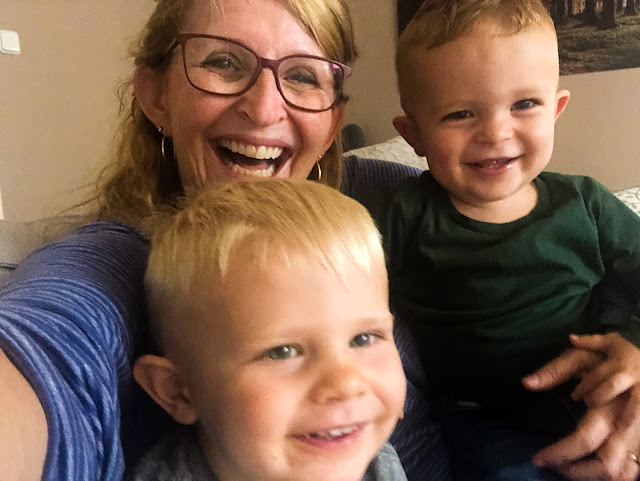 Lara had gotten home with Judah so all three boys went down at basically the same time. Charlie took a nap on their guest bed, looking so cute all tucked in and cozy! 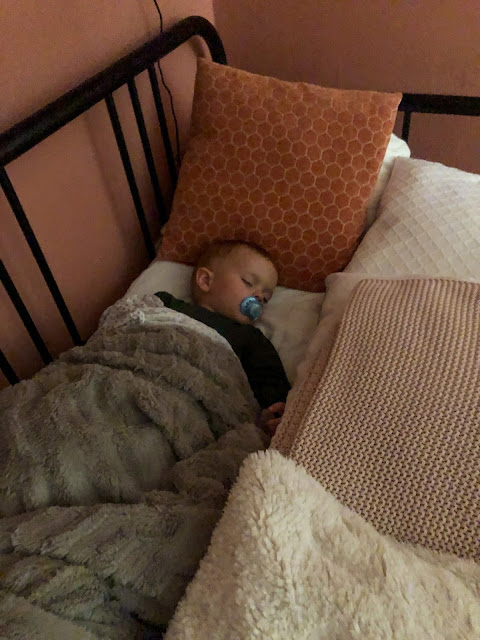 Once everyone was up and had eaten another snack (yes, snacks are big in toddler's lives!) we got ready to head back to Frydlant. 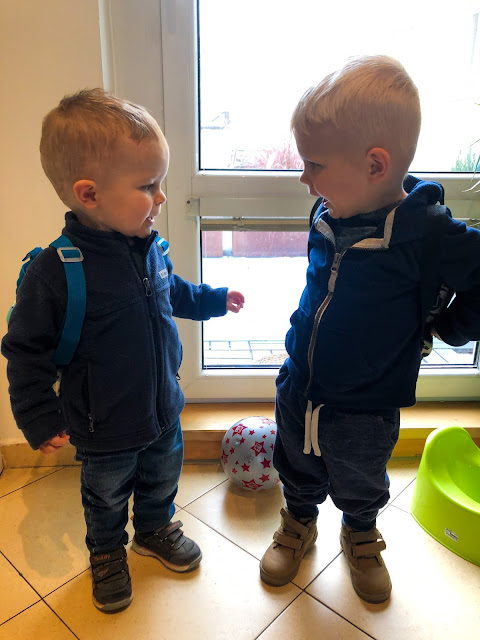 I swear that these two grew up a little bit today! They looked bigger and were acting more like big kids after their naps! 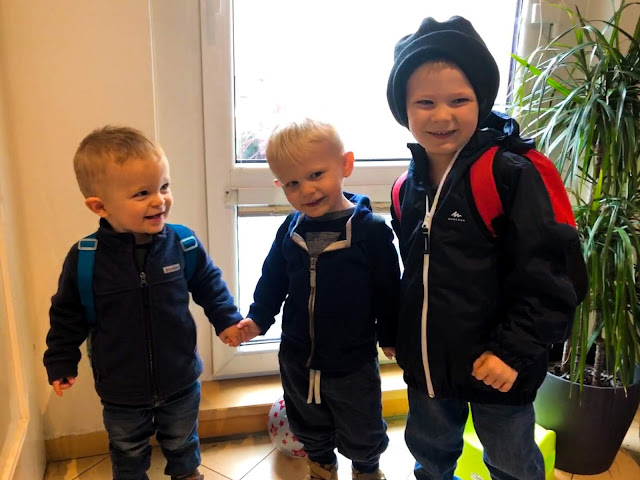 I was SO glad to have Lara there to get us to the car  - I'd parked somewhere different than where she did. But she walked with the little boys and me and helped get them in their carseats, and then headed to her car with Judah. 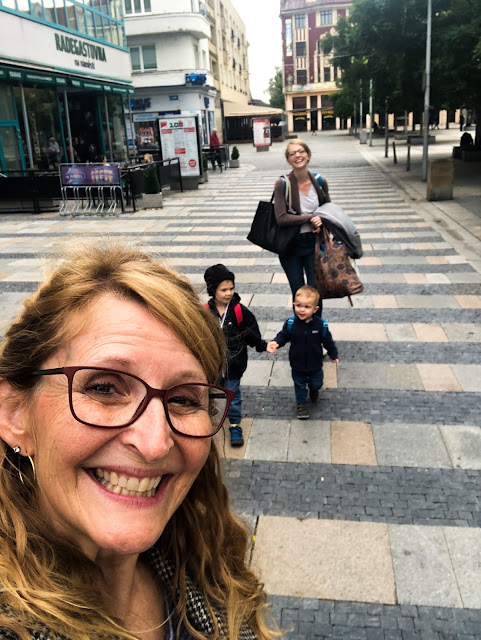 We arrived back at our house an hour later (traffic is C-R-A-Z-Y these days driving from Ostrava to Frydlant) and they all happily returned to playing together at our house! 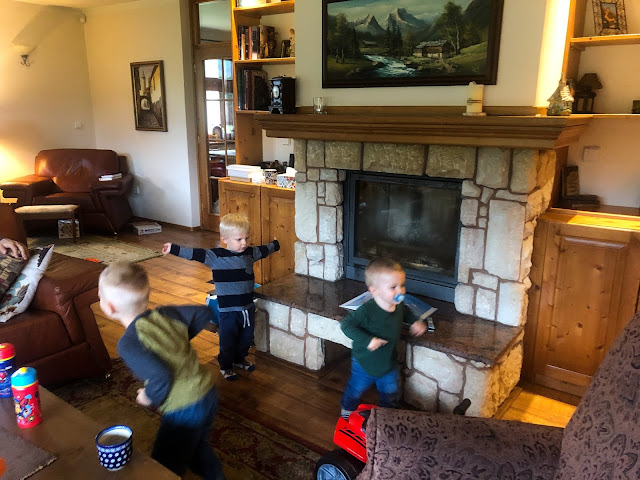 These are happy little boy days!
Posted by Living By Lysa at 10:28 PM