Rather than driving into Ostrava, I decided to walk down to Frýdlant and take the train this morning. 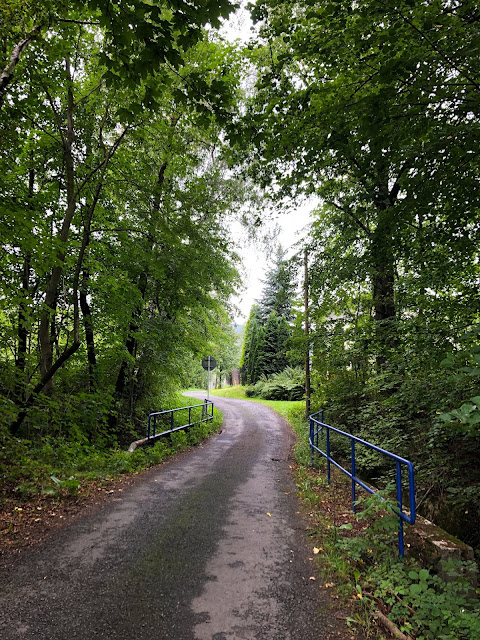 I thought I gave myself plenty of time so was meandering on my walk and enjoying an early fall day.

But when I got down into town and double checked the time of departure, I realized I had the time wrong. 😳 Instead of having eight minutes to get there, it was three minutes before the train was scheduled to depart (and there's not another one for an hour), so I literally ran and made it onto the train with just moments left before it pulled out. 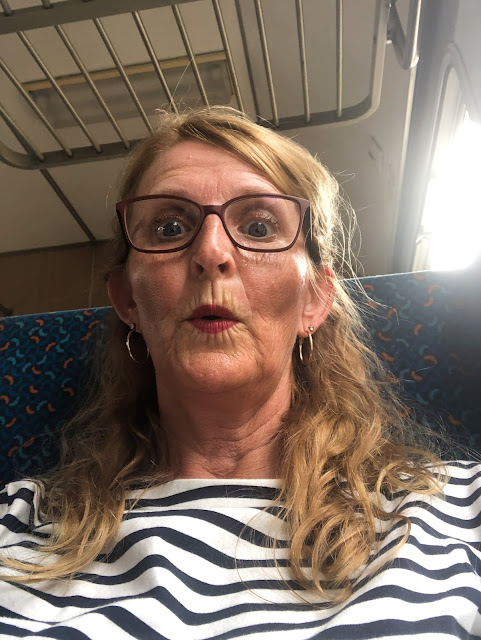 The thing is, I was on a schedule and needed to be in Ostrava by a certain time to meet up with some people. I got there just in time before these two came out to meet me. 😉 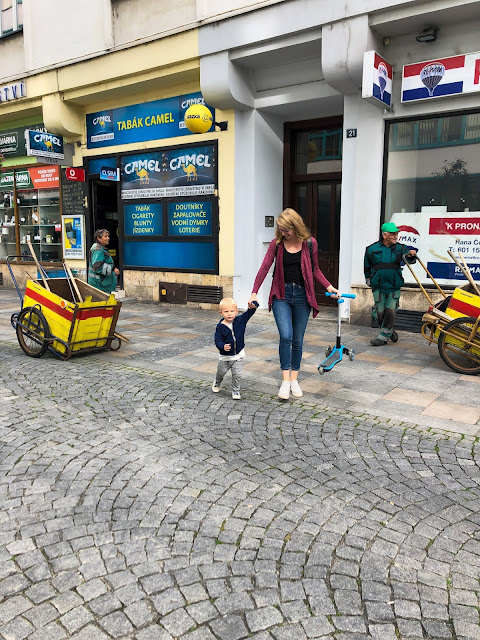 Today is the last day of Judah's first week at školka (Czech kindergarten), and I'm going with Lara and Asher to surprise him!


Školka is a little different than American kindergarten, in that children begin at a younger age and typically spend 2-3 years going before they start elementary school.

It's not daycare, but an actual learning program that teaches everything from colors, counting and the calendar, to manners and proper school behavior. Our kids benefitted so much from their years in školka because it gave them all of those things AND the Czech language before they started first grade. 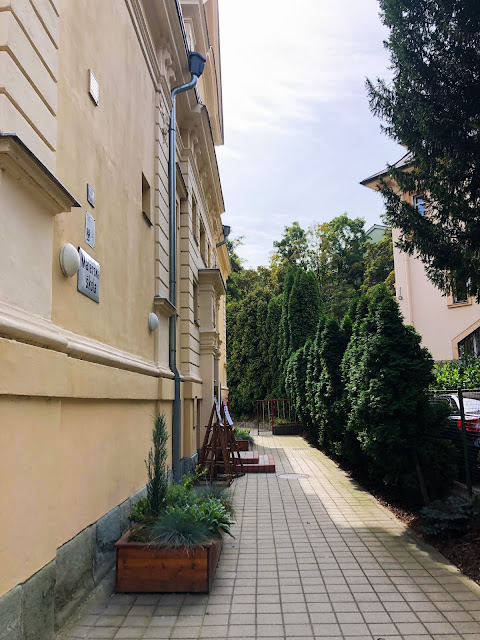 Walking in was a blast from the past for me! I spent five years taking our kids to školka in Havířov; and while the layout and building is different here in Ostrava, this one still felt so familiar to me! 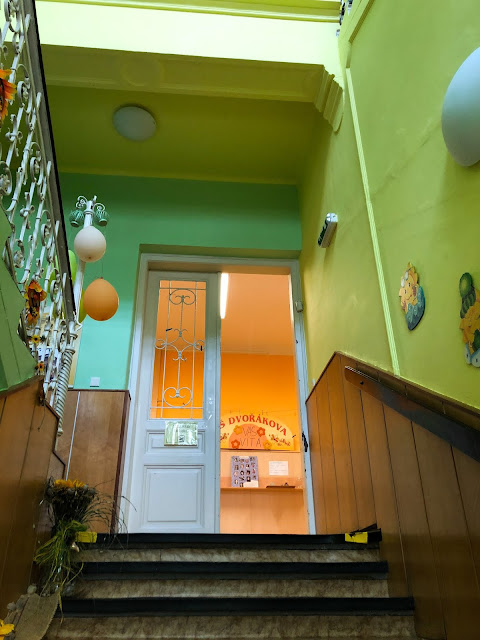 What a sweet moment to surprise Judah here in his first školka classroom! 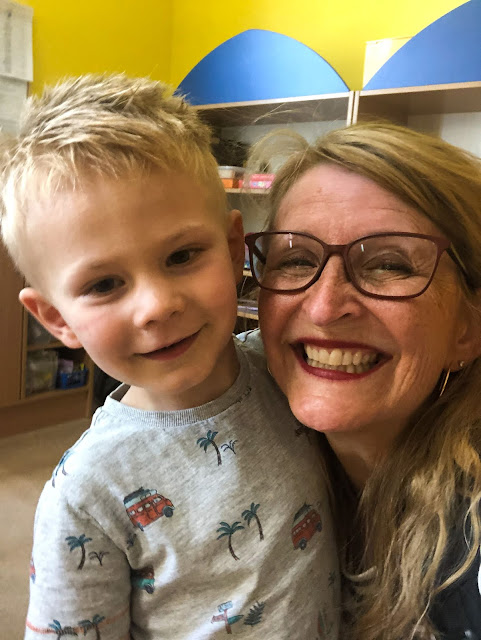 He was so chatty and wanted to not only show me around, but tell me about everything! 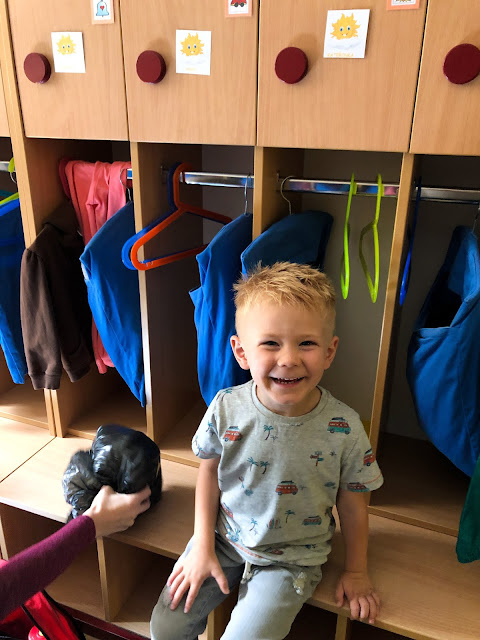 Including the bathroom! ☺️ 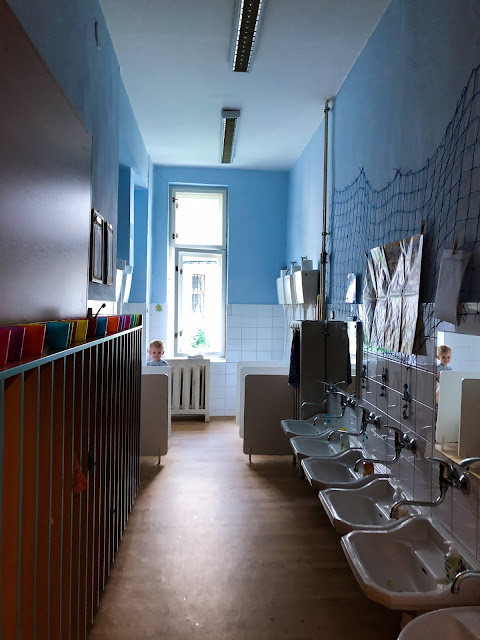 His školka is a nice walk from their home in the center, and he chatted the whole way back...

Until there was a pigeon in the square to go chase! 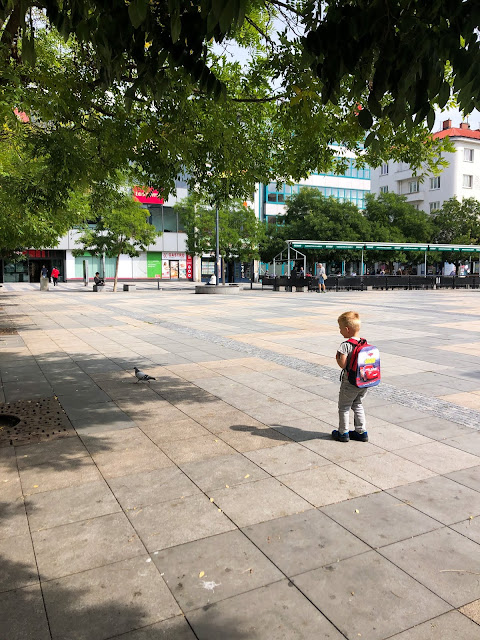 When we got back to their home he asked if I was going to stay, and I told him yes...all the way until bedtime! That got a good smile from him. 😊 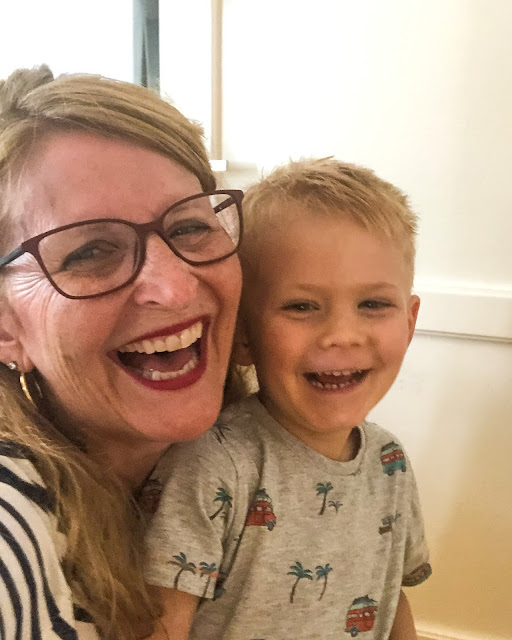 After his nap, Lara, Asher and I went back out in the square and bought ice cream cones to bring home to celebrate his first week of školka. 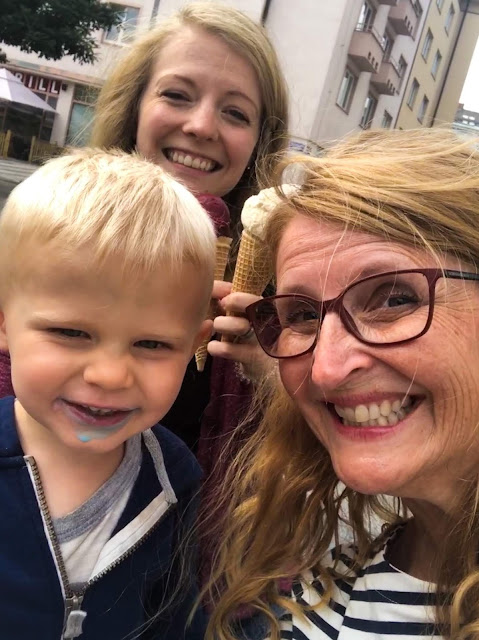 He had an 'owie' on his foot that made him not want to put his shoes on again...so we delivered his ice cream to him out on their porch! 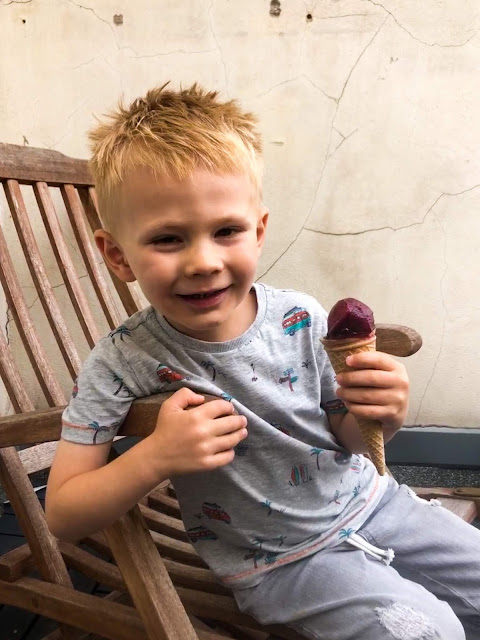 And there we stayed for the next hour, playing, talking and laughing, as we do! 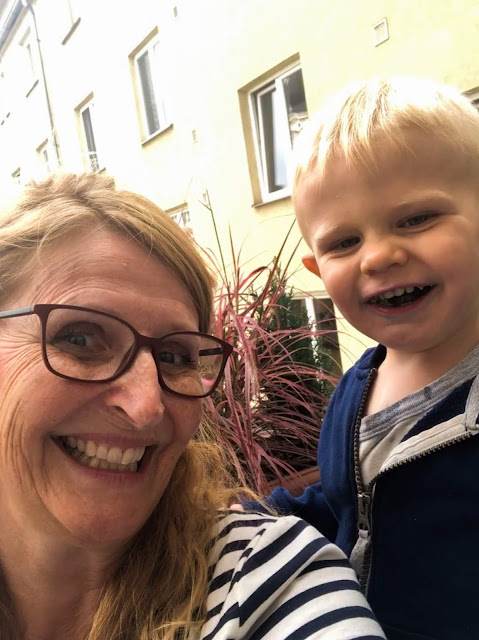 By 5:30, someone else came to celebrate the školka boy! 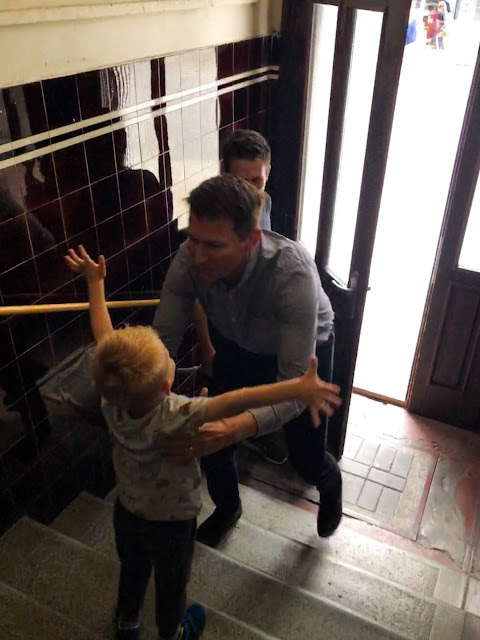 We were trying to race out to the square to meet up with Papa, but he got to the front door of the apartment before we made it outside! 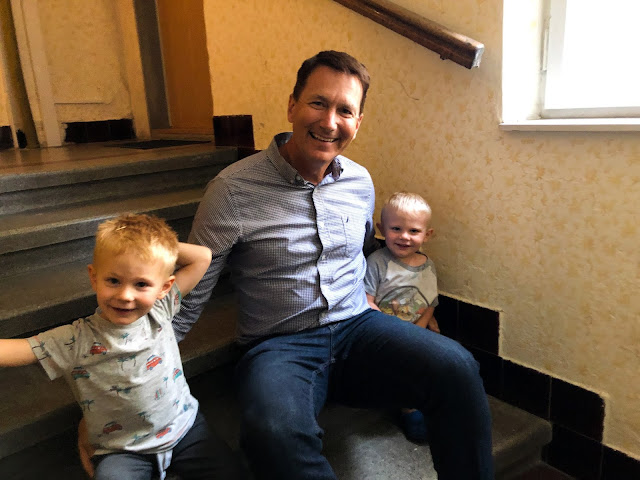 We had a wonderful meal together, catching up on the past few weeks. 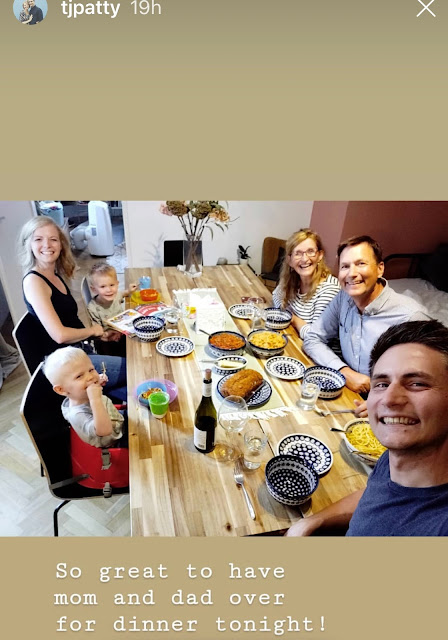 And some good boy wrestling time with Papa before baths and bedtime! 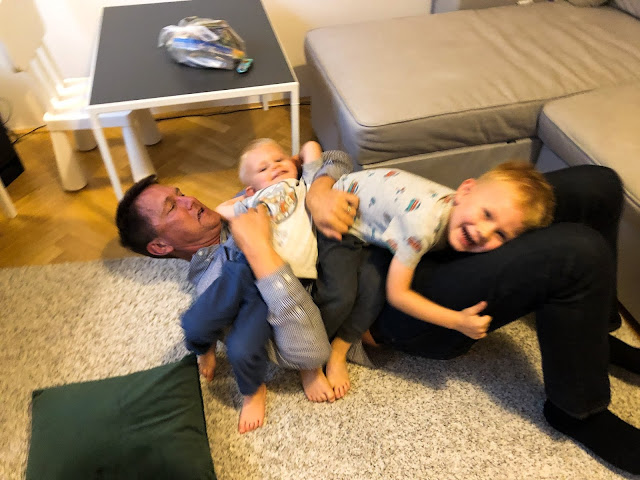 How we loved getting to celebrate Judah's big accomplishment: the end of his first week of Czech školka! 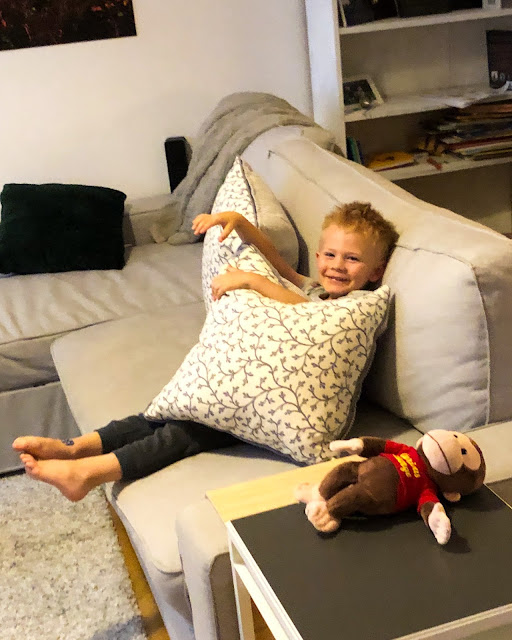