Because my doctor appointment here in Vienna was two hours long today, we didn't leave until it was dark. Which meant finding our hotel in the dark.

We again navigated the subway, and came out at what we hoped was the right spot. After a few missed turns, we came around the corner to this. 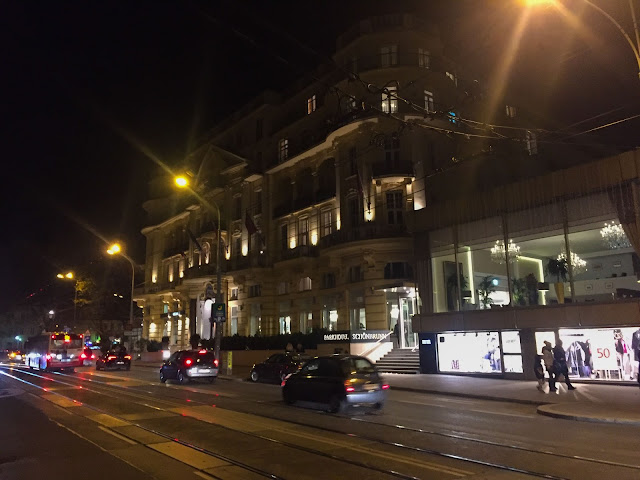 One of the things that I love to do is research places to stay. I like finding beautiful places for the best deals. From the internet this looked like a nice place and had good reviews. It was also very affordable.

I had no idea that it was such a treasure! 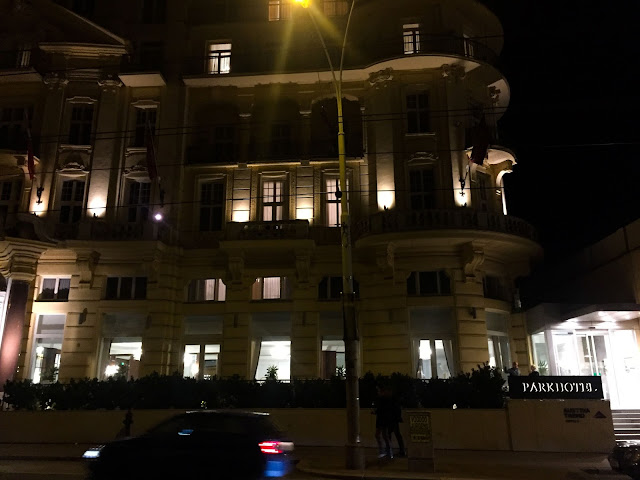 What I'd neglected to do when looking it up on Expedia was read further to find out its history!

At the Parkhotel Schönbrunn you can experience imperial Vienna on a truly personal level: the hotel is located in the carefully restored former guest house of Emperor Franz Joseph I. It was originally a rest stop, opened in 1787, which was taken over by Ferdinand Dommayer in 1823 and expanded into an inn. In the decades that followed, it was transformed into the venue for lavish balls, and became a byword for the Viennese lifestyle. Numerous works by Johann Strauss the elder and younger, as well as their contemporary Joseph Lanner, were premiered here. The Parkhotel Vienna was constructed from 1907 to 1908, according to plans drawn up by the Austrian architect Arnold Heymann. As well as 70 guest rooms and dining rooms, the hotel boasted a ballroom and a Viennese coffeehouse. 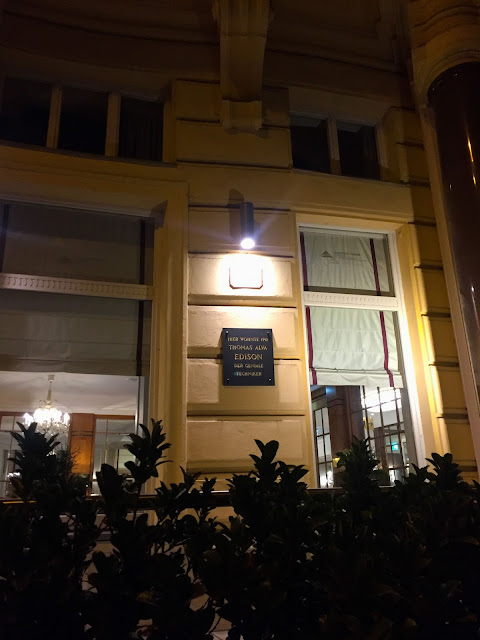 It went on to say:

Many of Emperor Franz Joseph’s guests stayed in this first-class hotel in the years that followed, including inventor Thomas Edison in 1911. The building was partly destroyed by fire in 1923, and was used as a military hospital during the Second World War. After the war ended and until the hotel was reopened in 1954, it served as the officers’ mess for the British occupation forces.

In 1963, following another fire, the hotel was completely renovated and extended to become, at that time, the biggest hotel complex in Vienna. Austria Trend Hotels has operated the hotel since 1999, and in 2010 it was modernized and expanded. Since the grand opening in November 2011, the Parkhotel Schönbrunn’s unique combination of imperial nostalgia and modern conveniences has allowed guests to experience all the aspects of true Viennese charm in perfect comfort. 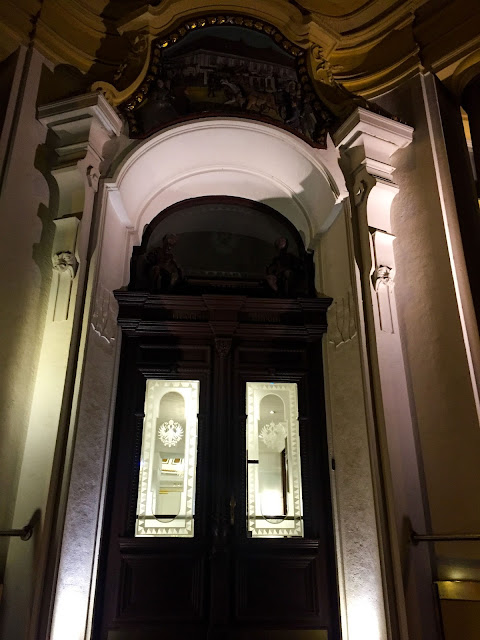 I'm rather glad I didn't find all of that out until later as it was SUCH a surprise to walk in and find such elegance everywhere. 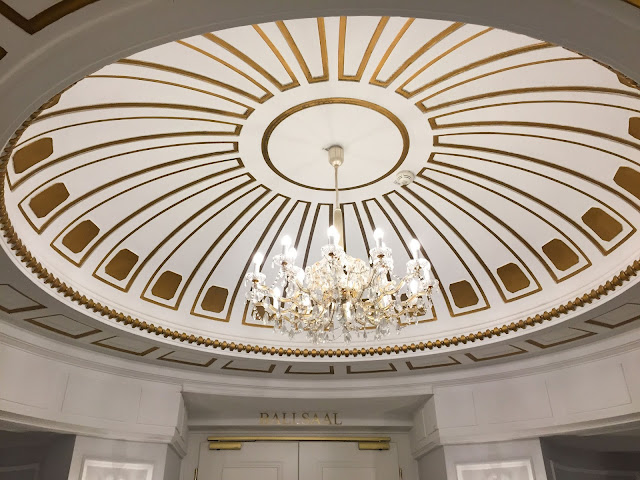 After putting our things in the room, Kristi and I went to find the restaurant. We headed down a hallway at the instructions of the front desk clerk. But upon opening the door, were told that only breakfast is served here but that the real restaurant was in the front of the hotel (the old Viennese coffeehouse talked about in the history).

The man told us that the sign over the door is actually UNESCO protected, as it is over 150 years old and can't be removed! 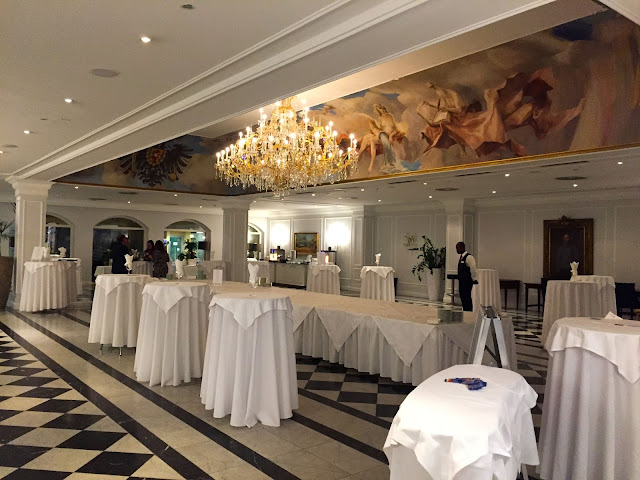 Right down to the bathroom! Yes, I think this is the very first time I've ever posted a picture of a bathroom on my blog. 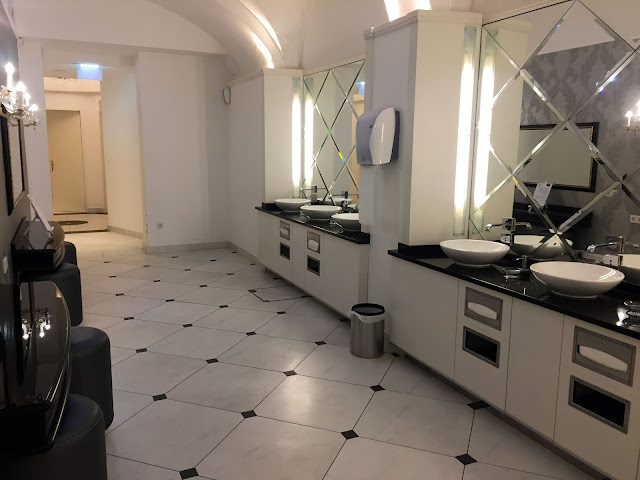 We had an absolutely delightful dinner in the restaurant, once the old coffeehouse. While I forgot to get pictures of Kristi and I there, I did remember to take one of the dessert we were served! 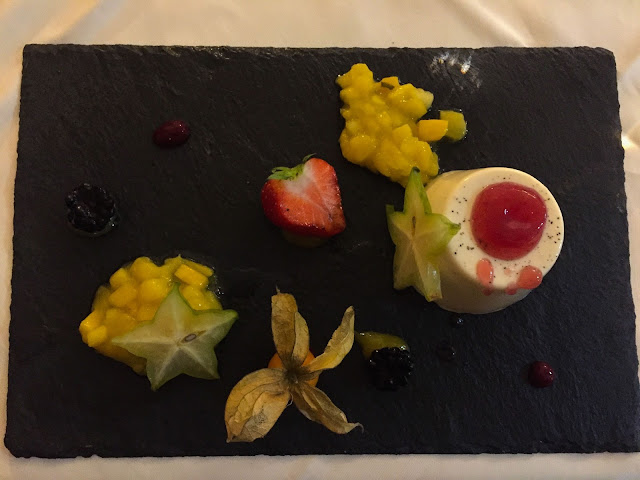 Being here made us both feel like princesses being taken care of by our dad, the King.

I guess there's some truth to that!

**If anyone happens to be planning a trip to Vienna, I can't recommend the Austria Trend Park Hotel Schönbrunn enough!**
Posted by Living By Lysa at 11:00 PM