As we were going to bed on Hvar last night Dave said to me, "There are supposed to be thundershowers tomorrow morning...I'm not sure we'll be able to leave."

This is because our mode of transportation back to the mainland this time is by our little boat! And you probably know that you don't want to be out on the sea in a lightening storm. So we went to bed not knowing what would happen the next morning.

But when we woke up and checked the weather information, it looked like the thunderstorm wouldn't happen until 11, so we worked as fast as we could to gather our things to take down to the dock. 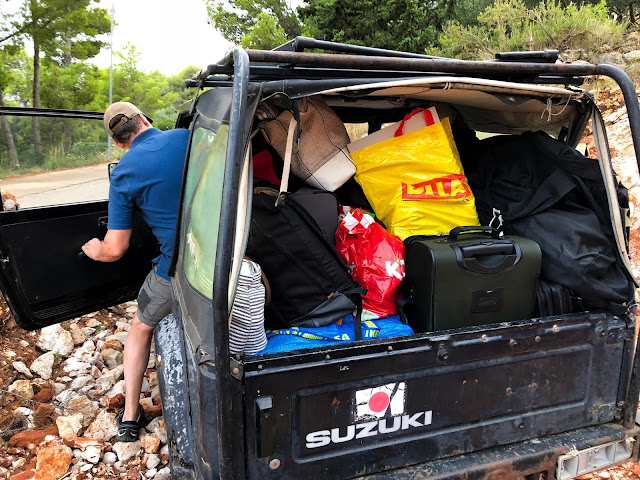 Since we have no car (this past week we'd been using the rental van that our friends brought over, but since they left two days ago, haven't had a car), we asked our friend in the village if we could borrow his jeep to take our things down to the boat. He's on the mainland right now, but said yes...with the caveat that the jeep is finicky and doesn't always run well.

We loaded everything in and hoped for the best! 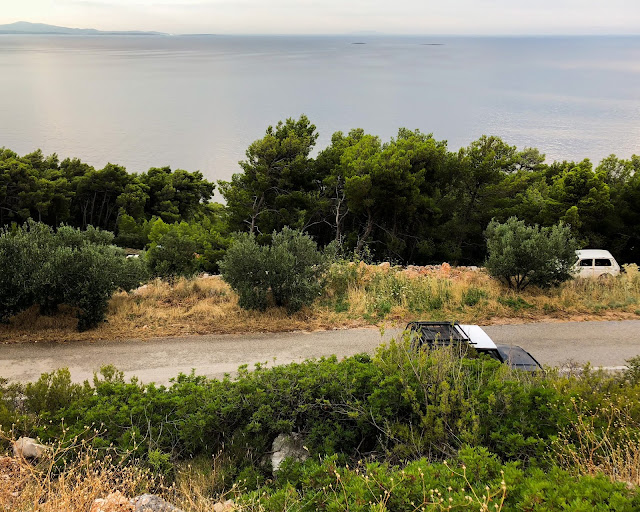 Since there was no room in the jeep for Claire and I, we took Kaylee and made the 15 minute hike down the hill to the marina. 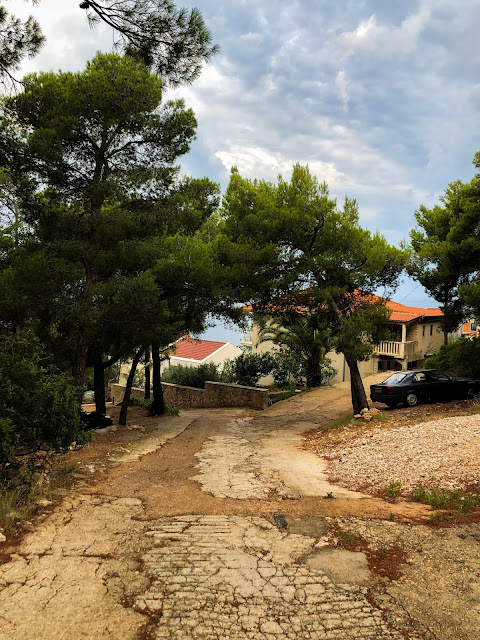 The skies were looking better by now, with a bit of sunshine peeking through. That was reassuring as I sure didn't want us to be out on the sea in a storm! 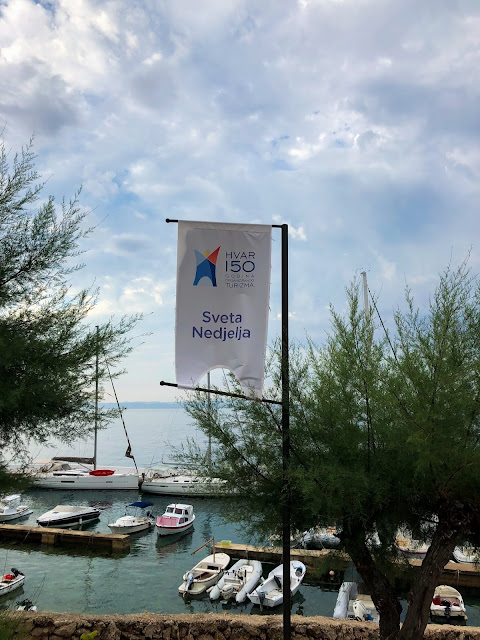 At 7 AM it was quieter than we expected at the marina, and no boats were going out, except one little "putt putt" fishing boat. All the sailboats were still moored, though that could have just been that they didn't want to get up early and sail! 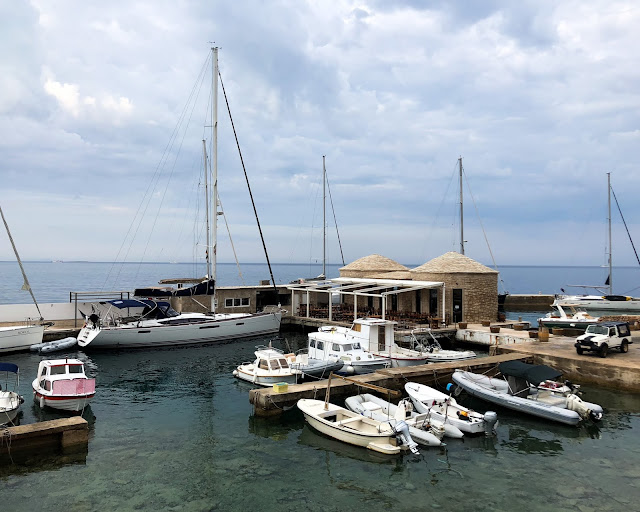 Dave had unloaded everything by himself by the time we got down, and said as he passed by "The jeep has already died four times coming down the hill...pray I make it back up!" And away he went. 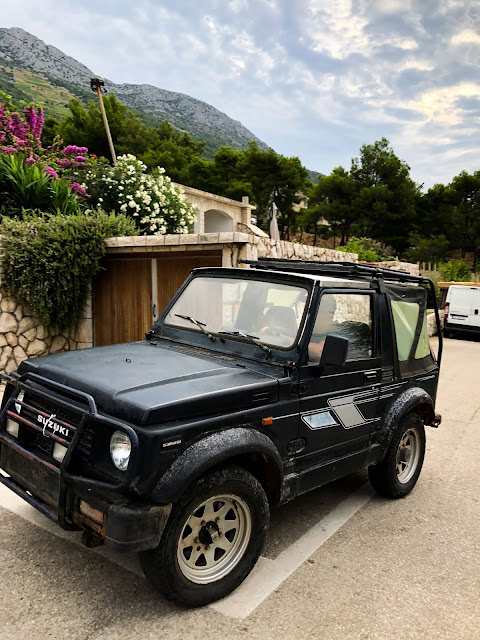 Claire and I moved everything to the pier and then waited for Dave to come back. 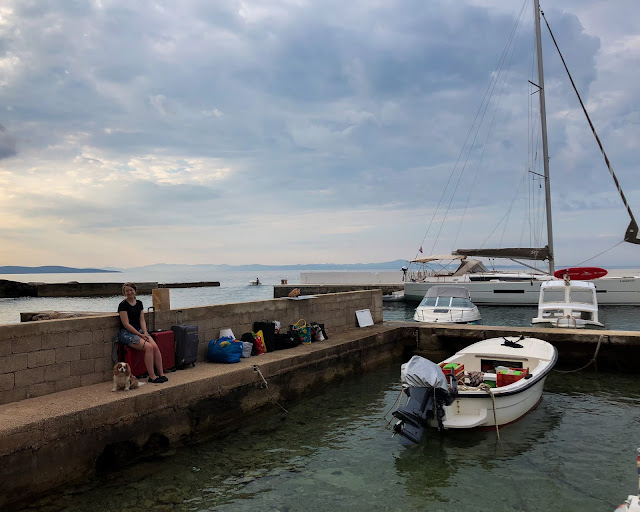 All the while, Kaylee is as "chill" as can be, having no idea what's going on! 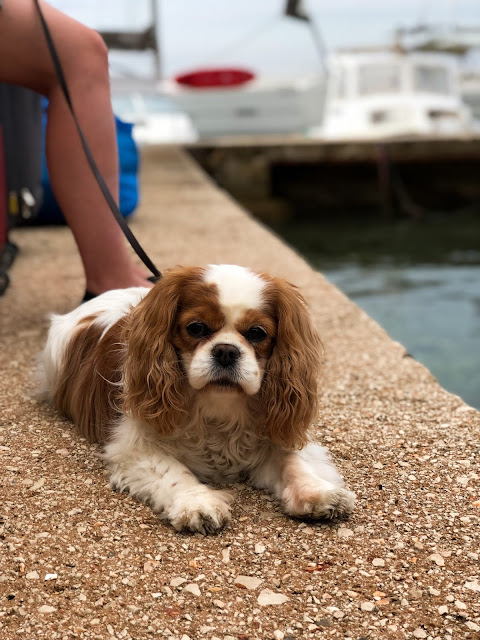 Once Dave returned (he did make it back up the hill!) we loaded in everything as quickly as possible, hoping that we were beating the storm, and said goodbye to our little village and marina as we set off in the boat. 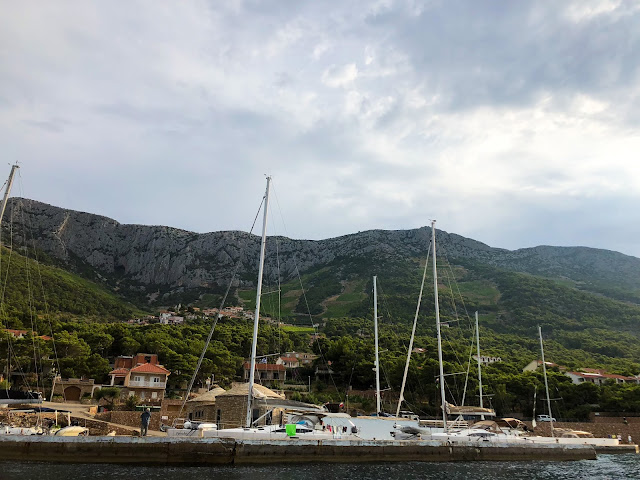 A ray of sunshine burst through as we began our journey back to the mainland, and I sighed in relief. 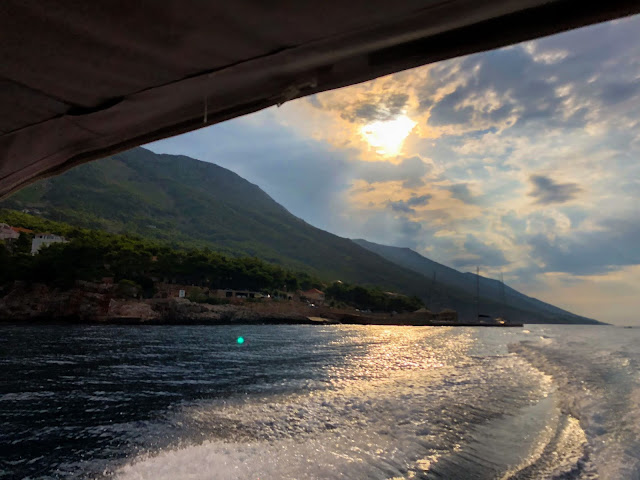 But that relief was short-lived. By the time we got to Hvar Town to put gas in the boat, it had started raining. 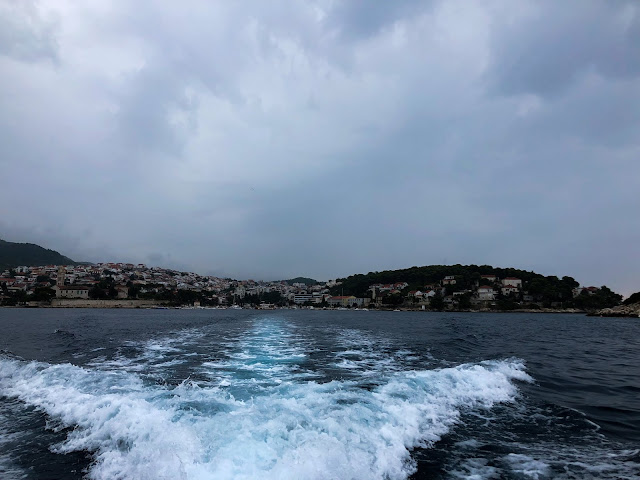 Thankfully I'd put a raincoat in my bag, so slipped it on as we headed back out to the sea. 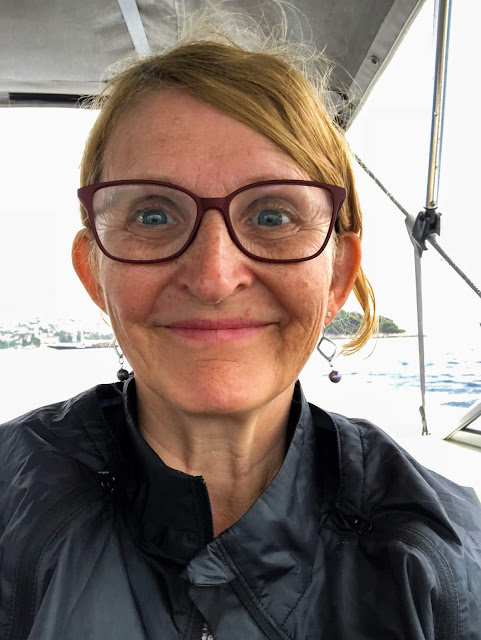 The temperature dropped significantly, and while it looks calm in the picture, it actually wasn't. 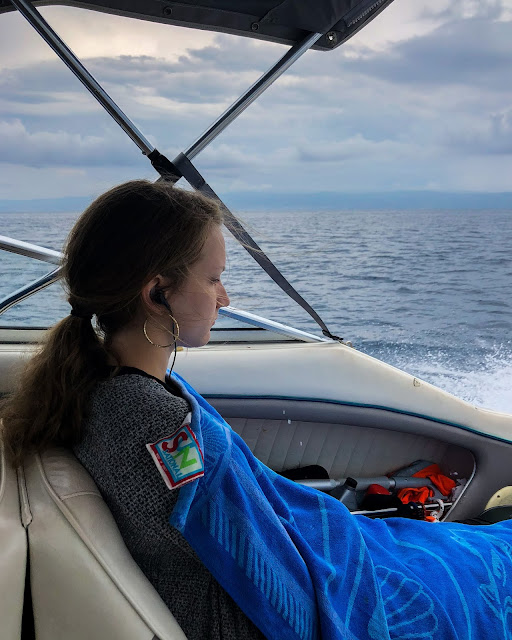 Rain fell steadily as we bumped along, with dark clouds on one side of the boat, and tiny rays of sunshine on the other. 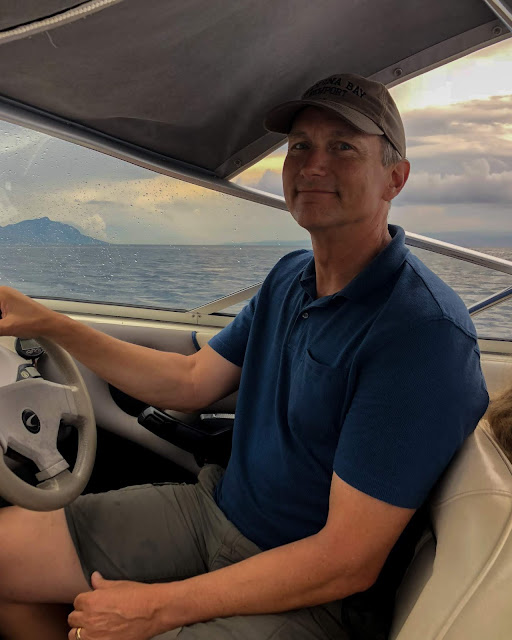 By the time we could see Split, the sky looked dark and menacing. 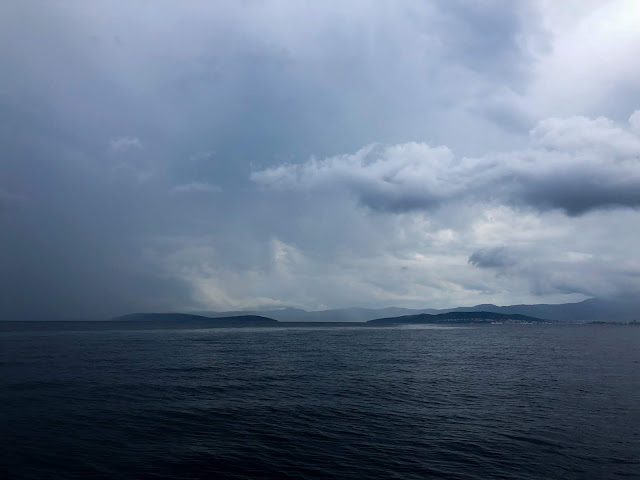 And had the feel of lightening coming at any moment as we motored on in rain. 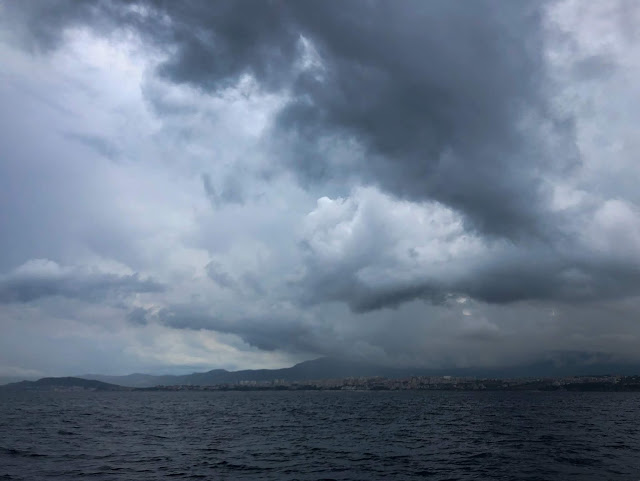 And all the while, Kaylee laid calmly in my lap, without a care in the world! 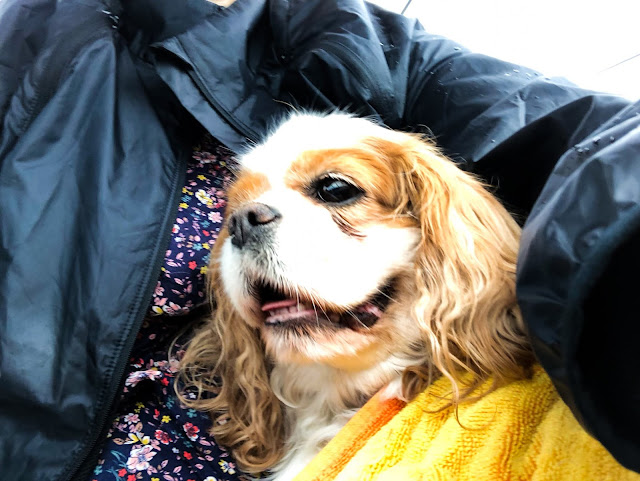 Getting our feet back on land was a huge relief, and we pulled the boat out of the water quickly thanks to marina guys who happened to be at the lift right when we arrived (this never happens). 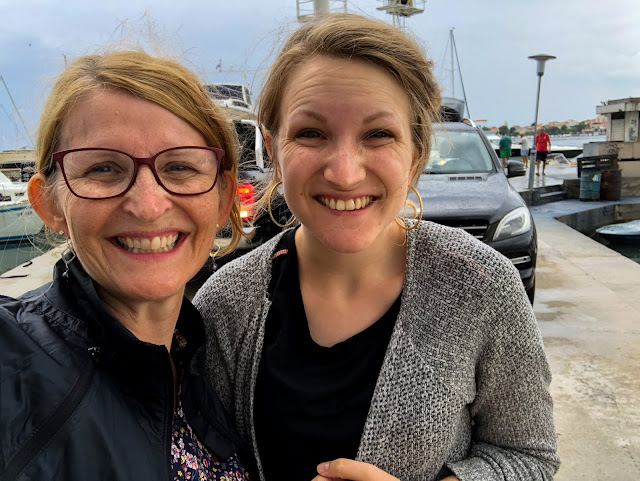 Except for heavy traffic on the roads and at the border, we had a blessedly uneventful trip back! 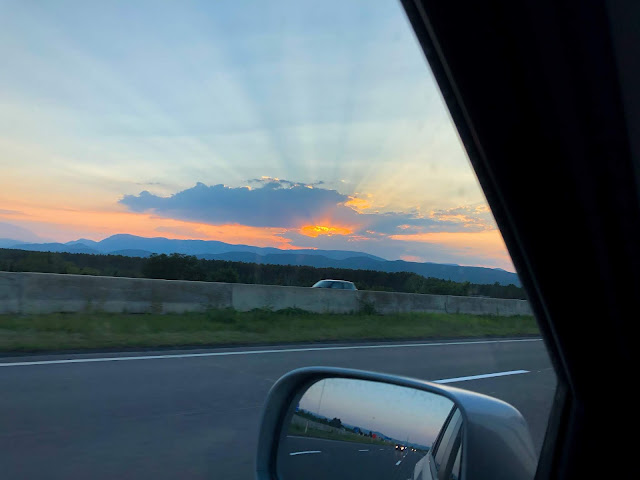 Our regular pitstop at McDonalds for dinner on the outskirts of Vienna refueled us for the rest of the way home. 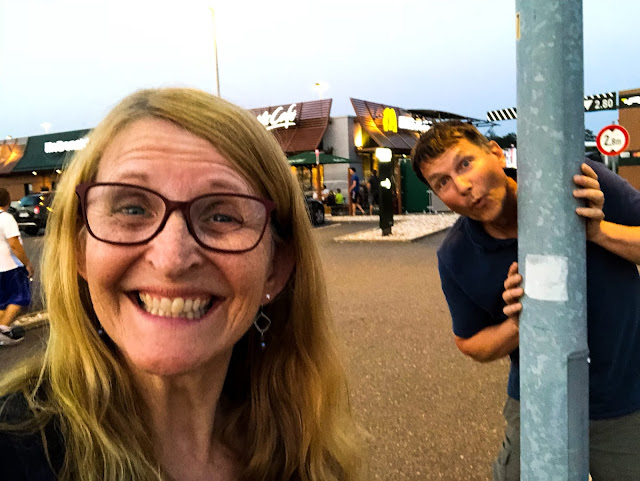 And we were all glad to arrive safely at home just past midnight, after our long day of travels! 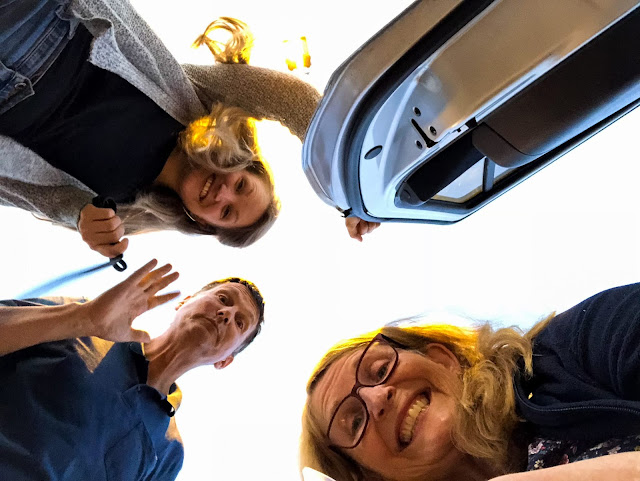