Thanks to Dave's ingenuity and the Lord's kindness, during the economic downturn of 2008 we bought a 20 foot Bayliner boat in the States and shipped it to Czech (full story HERE).

It was already a 14 year old boat back then, but had been serviced well and kept inside by its owner when not in use, thus was in good shape.

Ten years later that boat is still serving us well!


We brought the boat down to Hvar this time so we could enjoy it with our friends who are here right now. 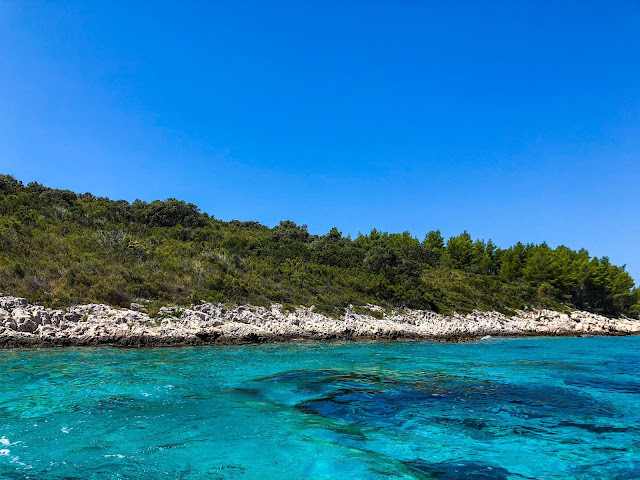 The nice thing about its size is that you can get into any and every cove on the various islands, seeing the clearest and most turquoise water you've ever seen! 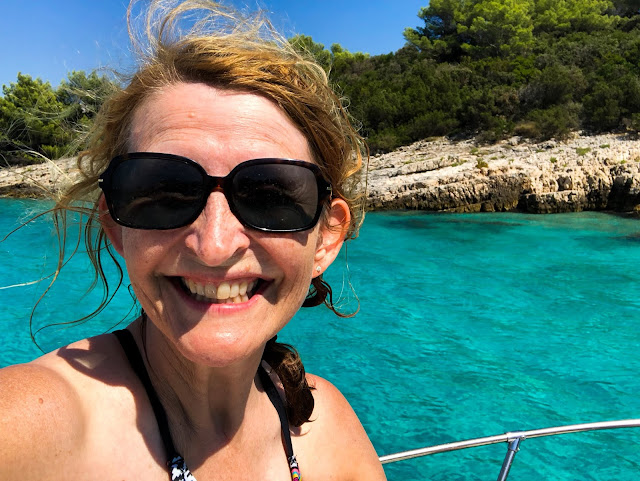 We headed over to Šćedro, a small island off the southern coast of Hvar. Around 30 people live on the island in the summer while the rest of the year it is deserted. There are no cars and no electricity here (everything is powered by generator in the summer when it's inhabited).

There are some spectacular sites on and around the island, so that's where our explorations took us today. 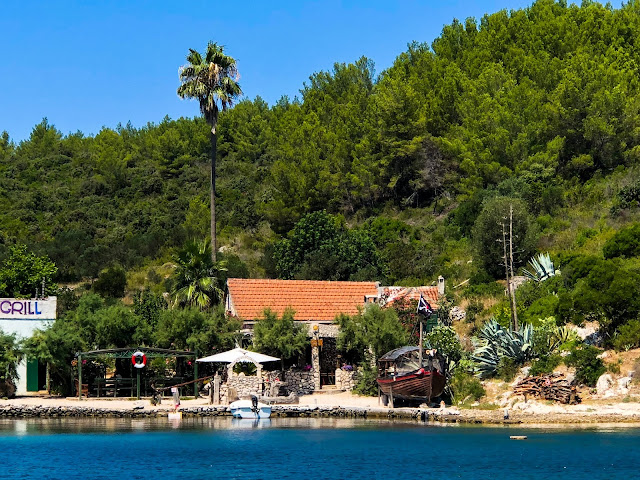 A number of restaurants dot the island and are open during the summer.

However in this particular cove we didn't come for the restaurant, but to look at the giant clams that lay at the bottom of the cove! All you need is a snorkel and you can see them through the crystal clear water as Polly and her son did. 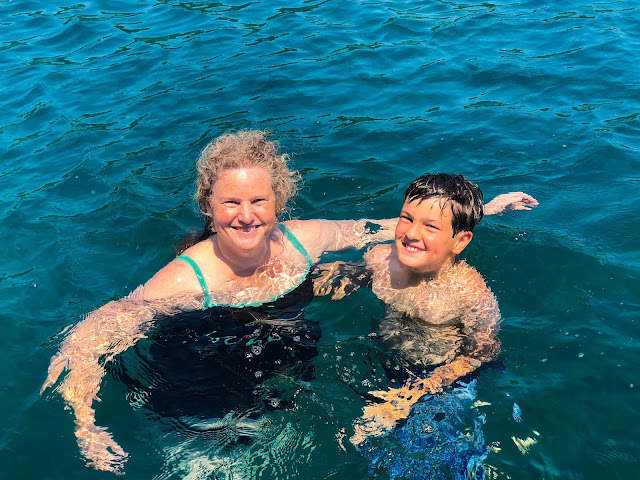 From there we ventured to the end of Šćedro to get into the leeward side of the island where the waters were protected from the wind, which was quite gusty today.

There we spent a nice long afternoon letting people take turns at this! 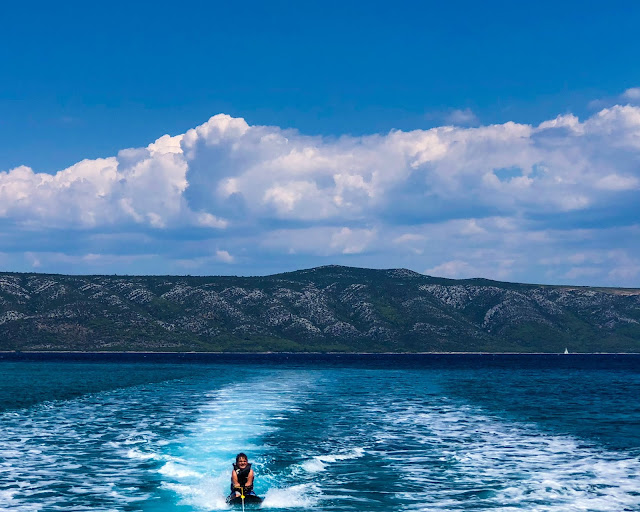 A kneeboard provided hours of entertainment as kids and adults alike took turns riding behind the boat, with spectacular views all around. 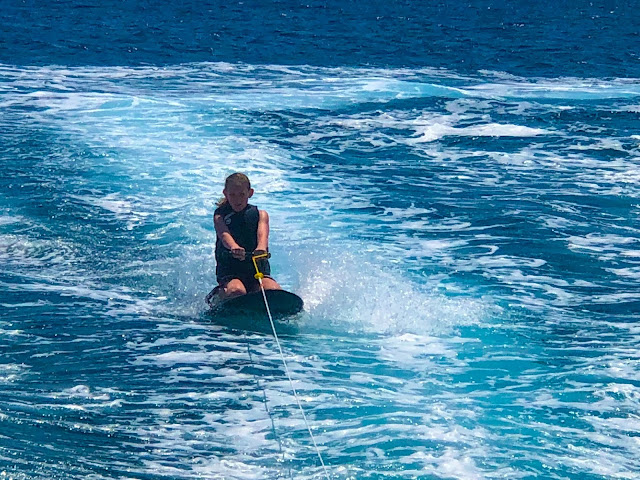 Even Claire took a turn...which isn't surprising since the kneeboard actually belongs to her! 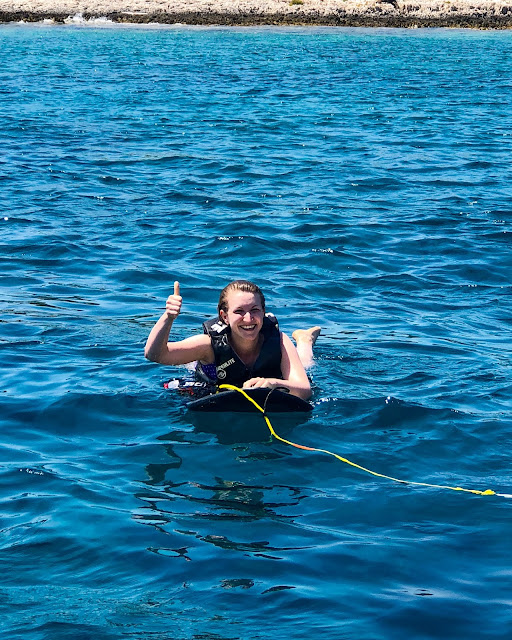 A number of years ago, dear friends of ours sent it to her from Canada after we'd been with them in their boat where Claire had tried, and thoroughly enjoyed, kneeboarding.

It's proved to be a good water sport for almost everyone who has come on our boat with us! 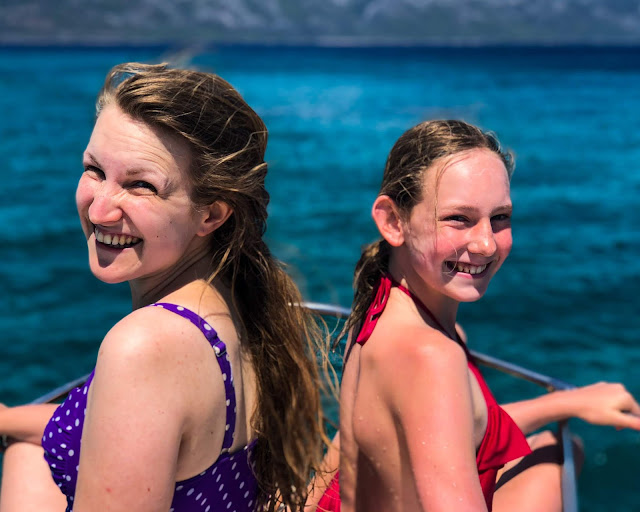 One of the things that we were most looking forward to was bringing our friends to this cove on the island of Šćedro. 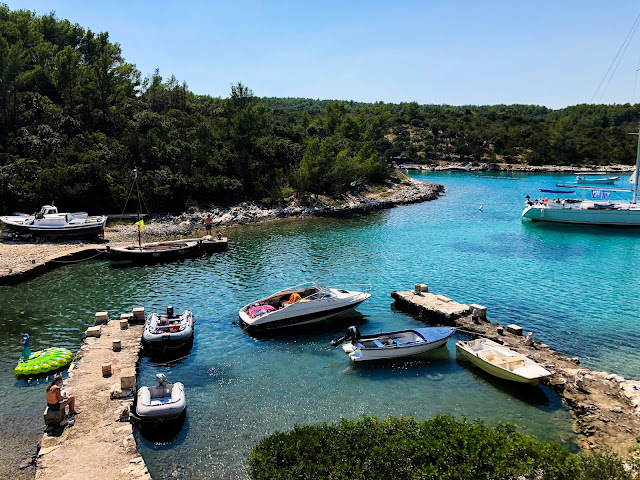 Ten years ago when we first vacationed on Hvar, and before we bought our boat, Dave, our sons, and the other men and boys we vacationed with, rented a little "putt putt" boat and motored out to this island to see what was there. It was then they found this restaurant in one of the coves. 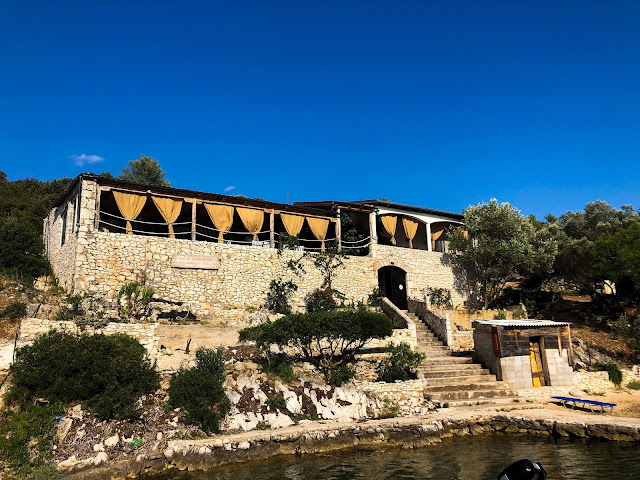 Because of what they ate there that day, they gave this cove a name...one we have called it ever since! So of course we had to come and try out that food with our dear friends. 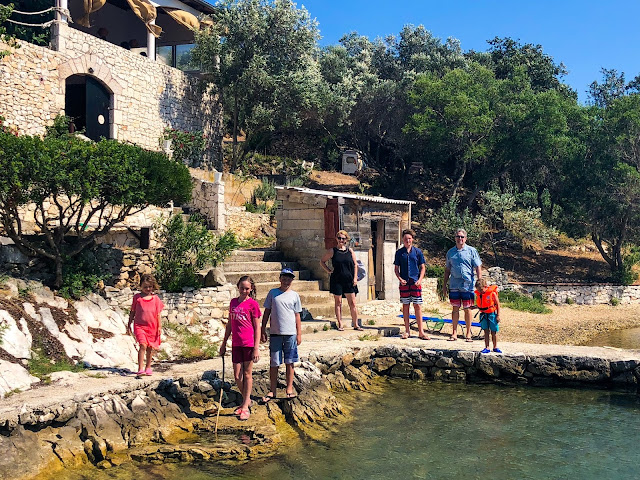 With burlap for curtains, no windowpanes, and a gentle breeze blowing through the restaurant, we settled in for a leisurely afternoon snack. 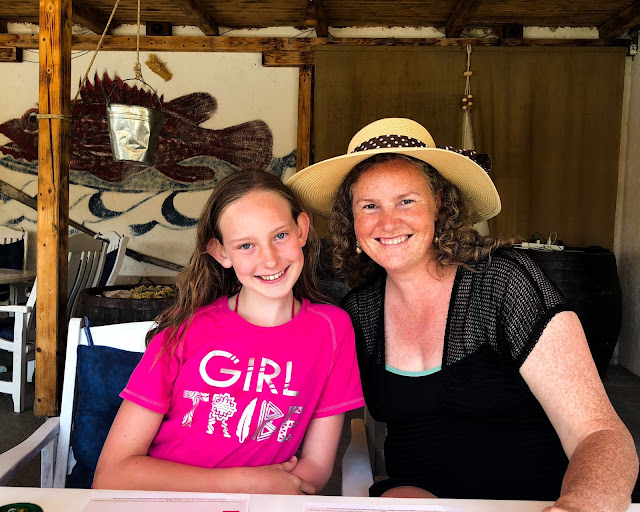 Any ideas what the aforementioned food was that the guys and boys had here ten years ago? 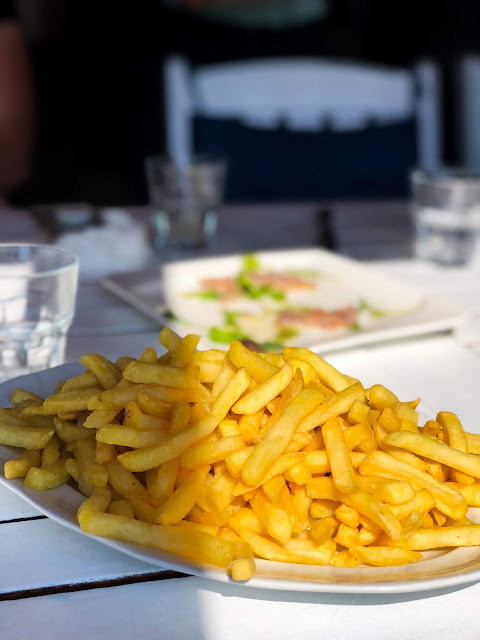 Yes, it was french fries! And thus this place was dubbed "French Fry Cove" all those years ago, and remains that to this day...at least to us. 😉 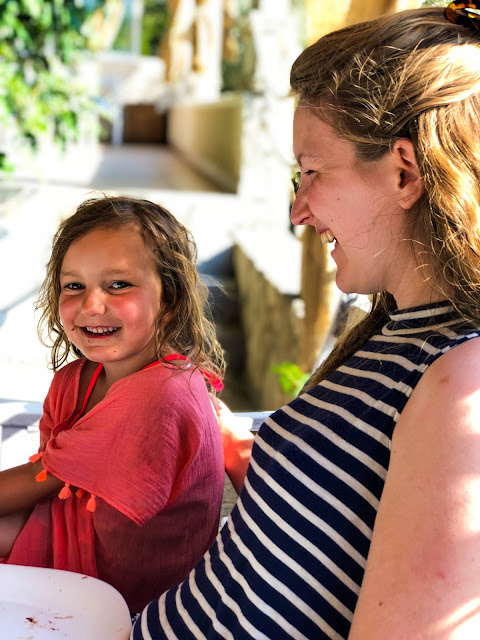 We not only enjoyed a big platter of them, but some pretty yummy crepes and other good food too. 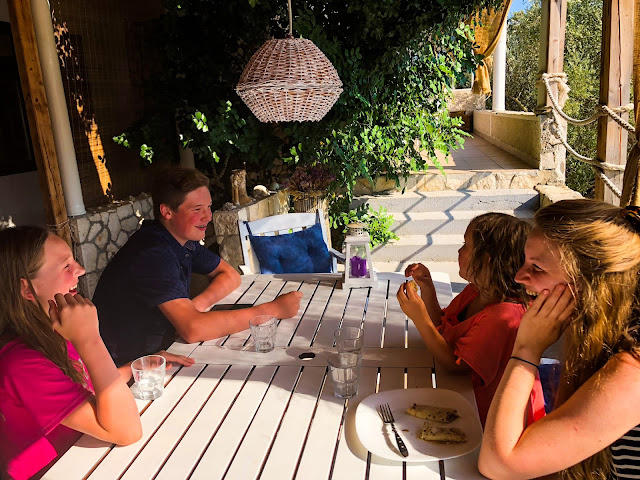 A good strong cup of Turkish coffee hit the spot at the end. 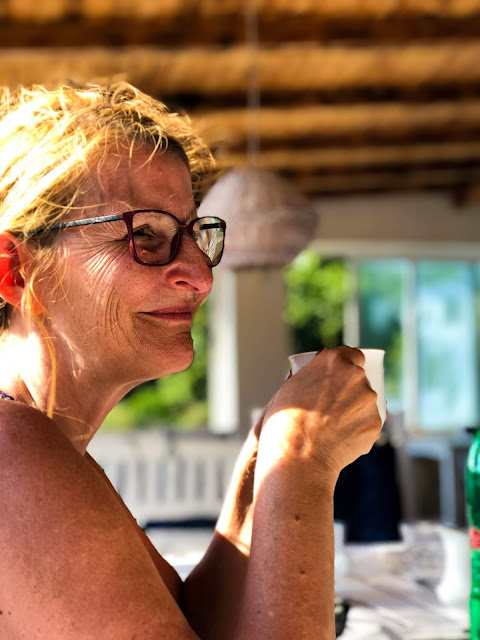 So far this stop is one of my favorite memories of the trip! 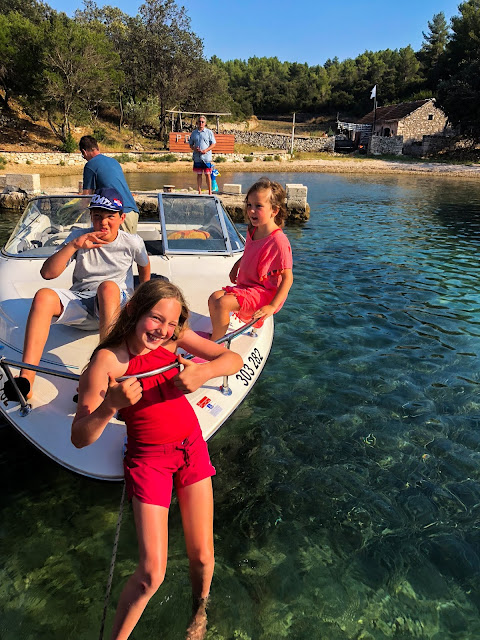 We all piled back into the boat to make our way home, thankful to have Dave at the helm! 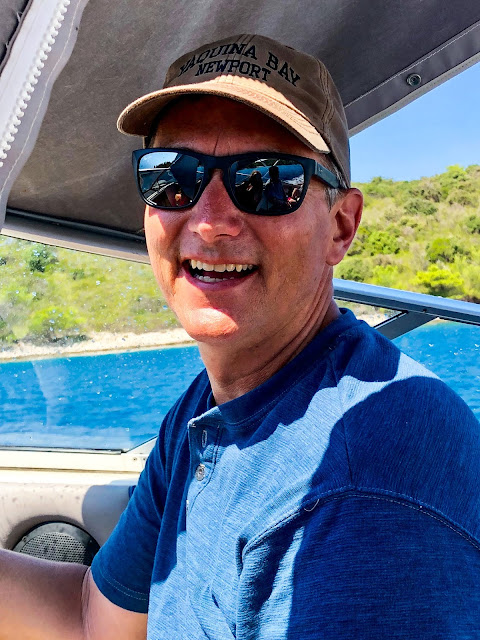 It was a truly wonderful afternoon seeing and enjoying God's creativity and beauty here. 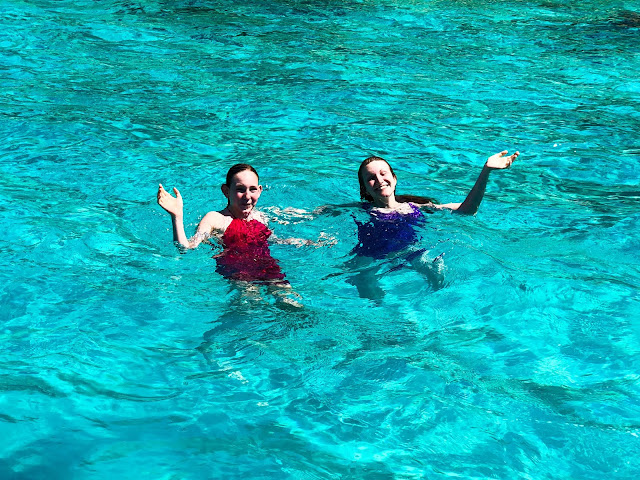