Prague at its Finest

With all the regular summer tourists, plus 100 000 extra people due to the 115th Harley Davidson anniversary exhibition this week-end, Prague is FULL.

But that never stops me from taking photos to document a special trip here with dear friends! 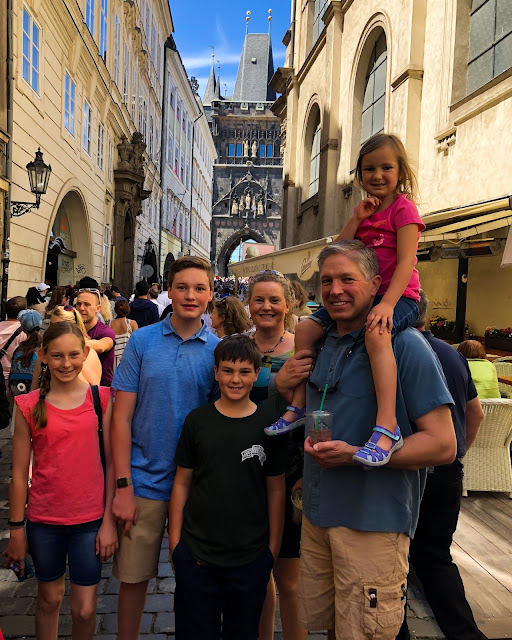 Steve and Polly, along with their four kids, are here in Prague with me this week-end while Dave is speaking at a conference here. That meant that I got to be the tour guide and show them Prague through my eyes and all my favorite sites! 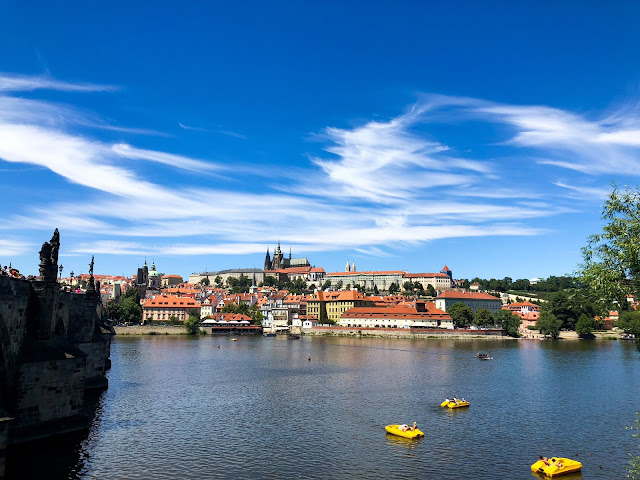 By looking at this next photo of Polly and I, you'd never know that we had to wait for several minutes before nicely elbowing our way in to get a photo by ourselves in this spot! 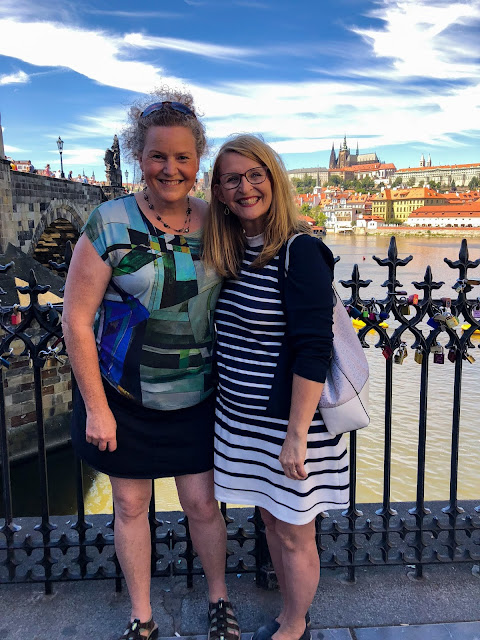 It was even trickier getting the whole family in without anyone else in the picture, but I did it! 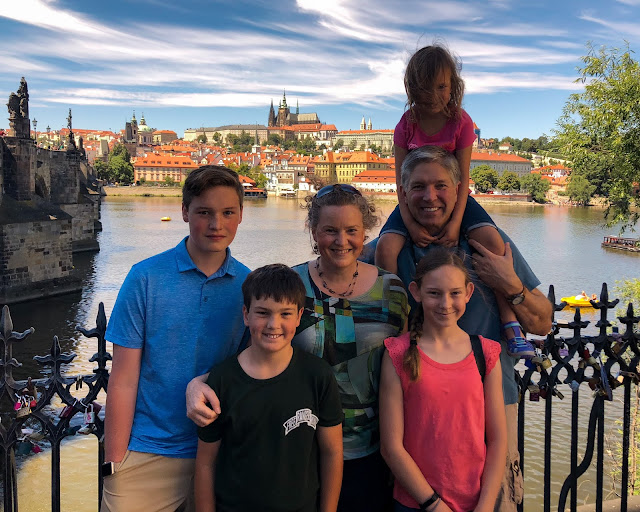 You just can't be here in Prague without getting that shot of the castle in the background. Seriously! It almost looks like a painting doesn't it?

We made our way across the Charles Bridge, stopping along the way to take more photos, and then came down underneath to take a break for lunch. 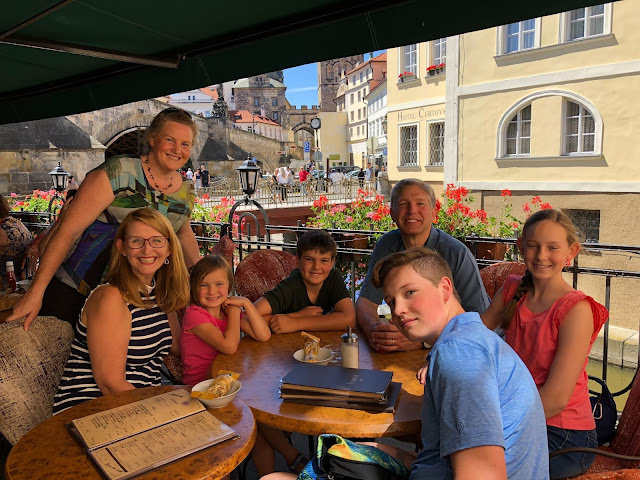 This spot on the side of the canal that leads to the Vltava river, is a perfect place for a break from the crowds, and some lunch to fuel us for our trek up to the castle. 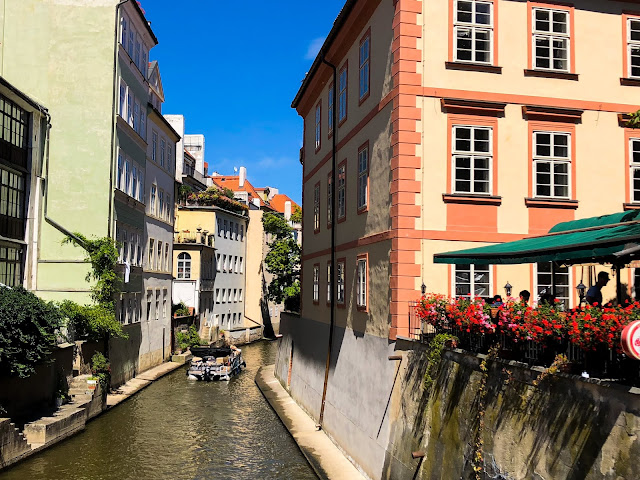 I think this might have been the only time all day when I actually had a few feet of clear space in front of me. The amount of people here today is unbelievable! 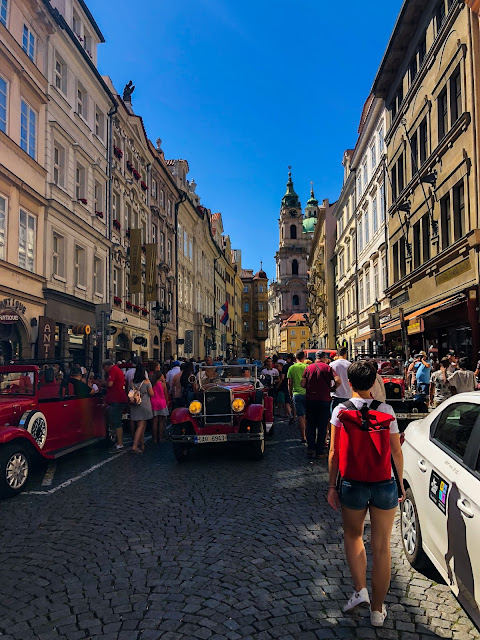 But despite the crowds, we found all sorts of fun things to look at and eat on our way up to the castle! 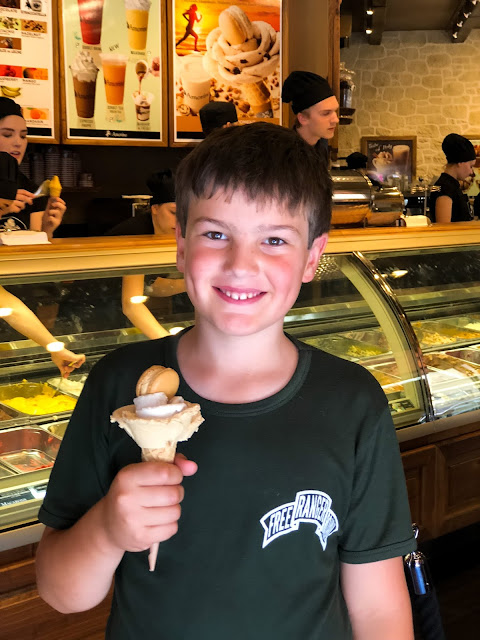 To reach the castle through Mala Strana, the small side of Prague, it's quite a hike up the hill. I thought it might be hard for some of the kids, but they did great, even joking around on the way! 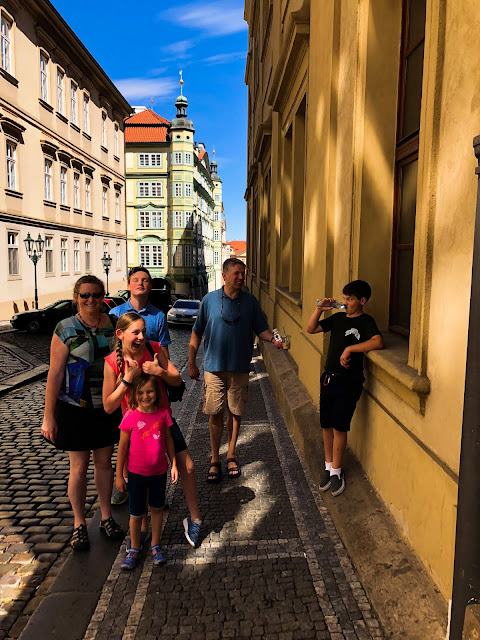 The reward of the hike is this awesome view from the top. WOW! It couldn't have been a prettier day here. 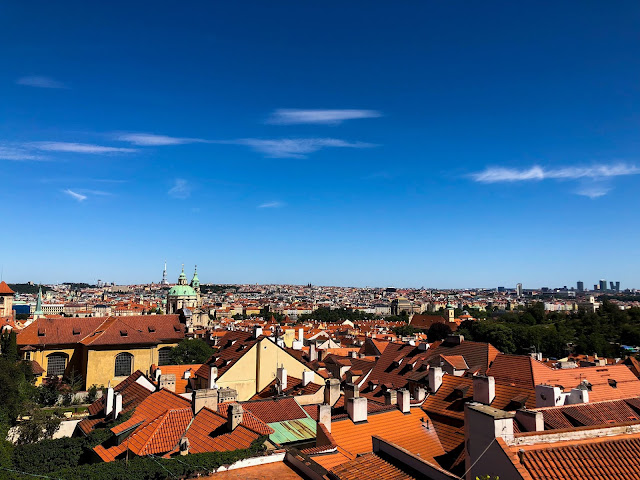 I've never noticed the gruesome statues that greet you at the entrance to the castle. I guess way back then they wanted you to know who was in charge, and that you'd better watch your step upon entering! 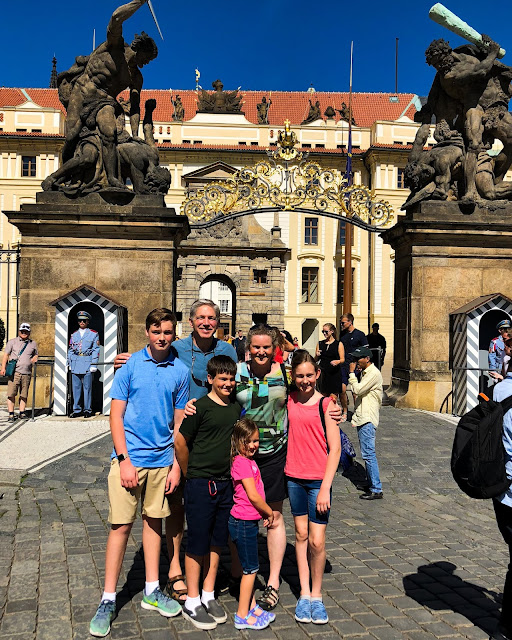 But it made for a fun photo of their family as they were about to begin their tour of the castle.

I grabbed a quick photo with Ginger before needing to leave them. 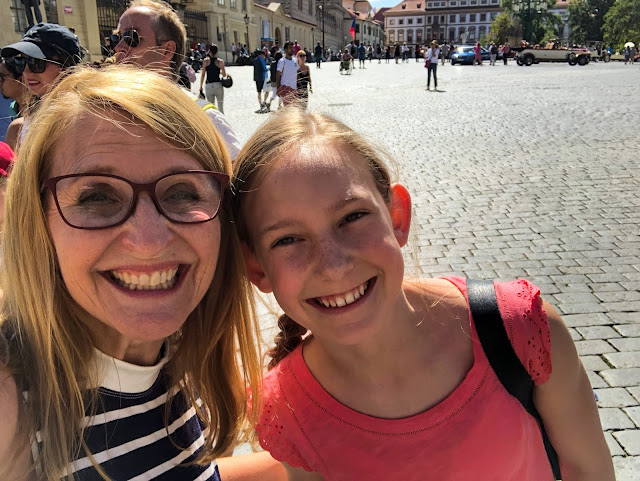 While I always like to take photos, this one was on purpose. She and I were together exactly two years ago today. Look how beautifully she's growing up! 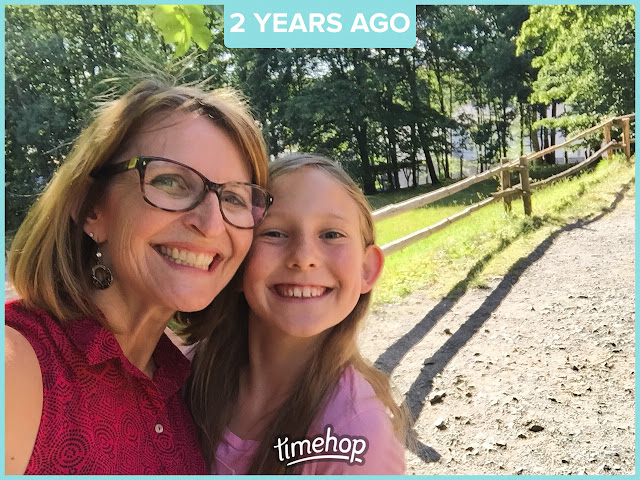 I said goodbye to them for now, and quickly called an Uber to come pick me up at the castle. 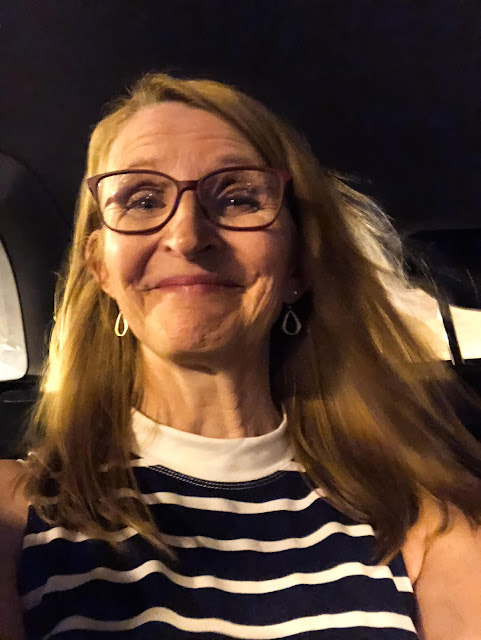 I thought I'd have time to take the metro to where I was going, but when I realized I didn't, it made me glad for the Uber app on my phone, and their prompt service! 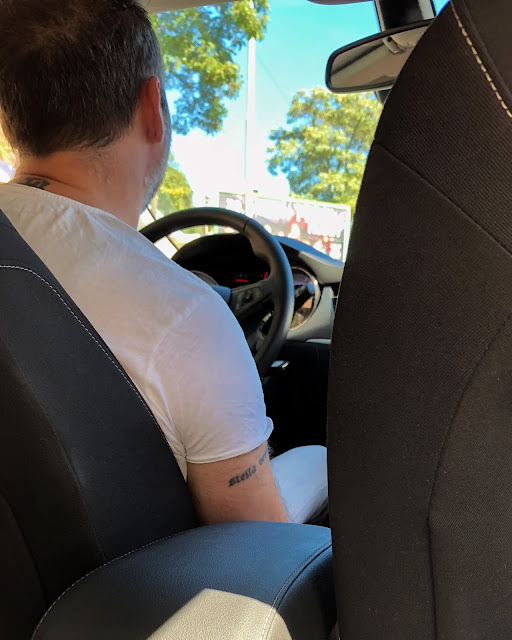 I was headed over to the conference where Dave's been teaching all week-end. He met me at the door so I could join him. 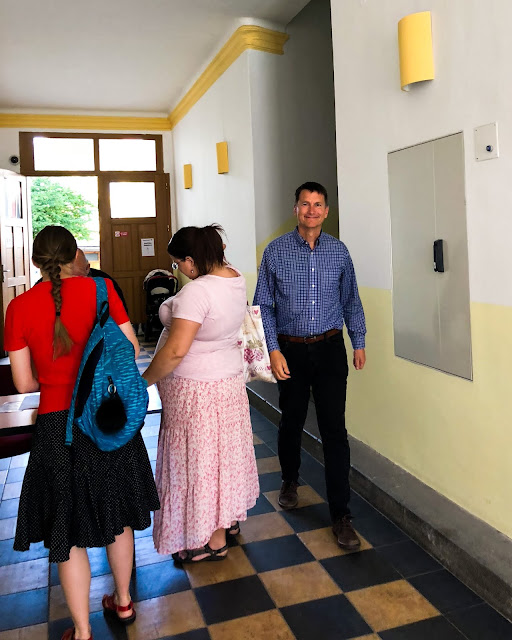 I made it there with just five minutes to spare before his next speaking time. He was giving his parenting seminar to a packed room with about 100 people. He did a great job! I'm rooting for his next book to be on this topic as it's such an important one. 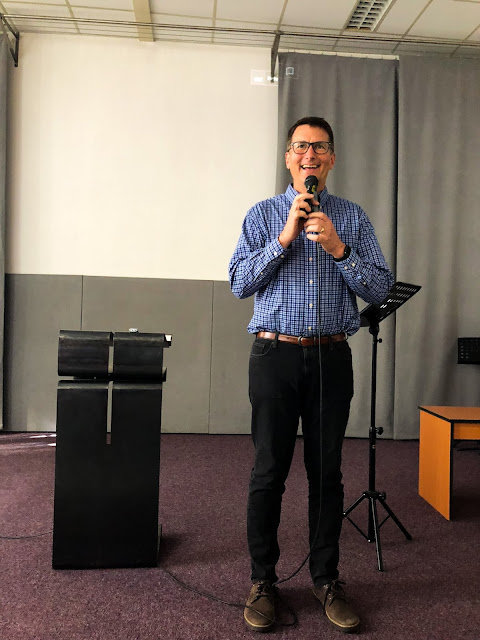 After the conference was done, we were able to catch the second half of the World Cup match between Russia and Croatia thanks to it being televised live by Czech TV. 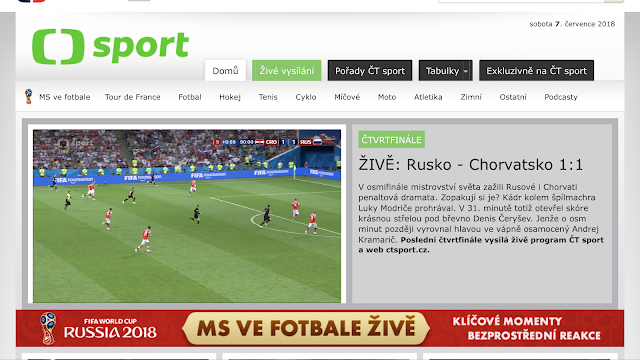 To our great delight, Croatia won in the very last moment of the match! WOW...soccer doesn't get any more exciting than that! 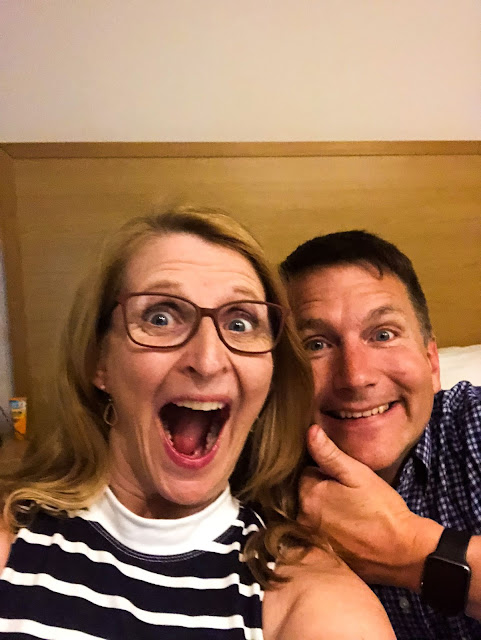 We'll actually be in Croatia on Sunday, July 15th, the day of the final match. Wouldn't it be fun to be there if they were playing that match? The country would surely come to a halt if that would happen.

Guess we'll see if it is even a possibility after Wednesday!
Posted by Living By Lysa at 10:30 PM