Being here at the Oregon Coast with Dave's family has been such a sweet time. We're glad that mom had a 90th birthday so we could gather together to celebrate her and spend time with each other! 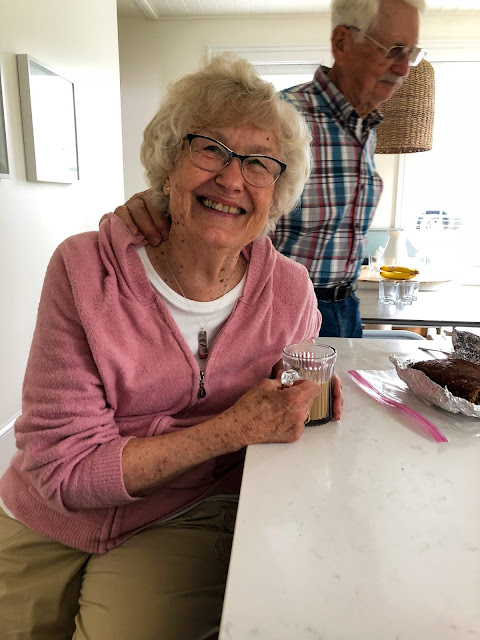 I've loved every minute with my dear sisters-in-law, who are much more like sisters than in-laws. Each of us only have brothers so when we married into the family, we got the sisters we'd never had. I sure love Kristi and Joyce! 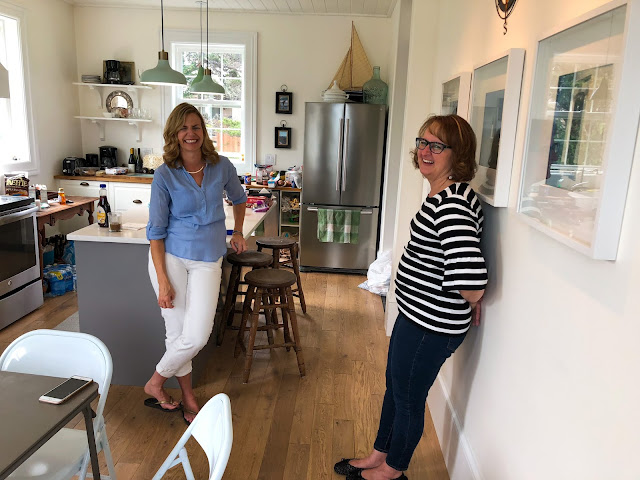 These days have been all about family, so we've spent hours together doing all sorts of different things. This morning, Dave was helping his mom put Instagram on her iPad so she can watch the goings-on of her kids, grandkids and great-grandkids! 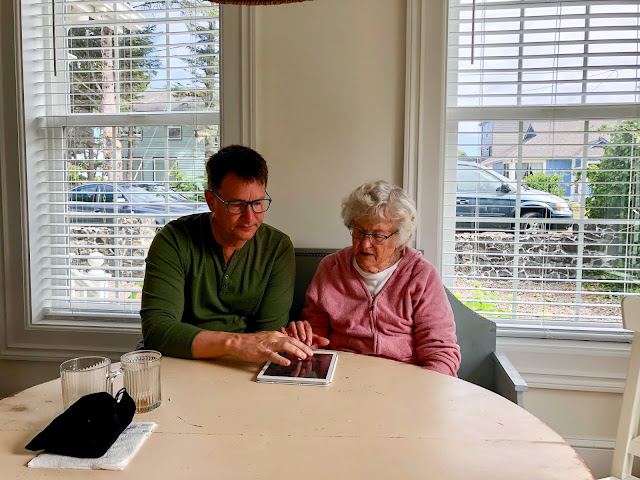 I loved watching dad with his boys too, having conversations about all sorts of different things throughout the week-end. 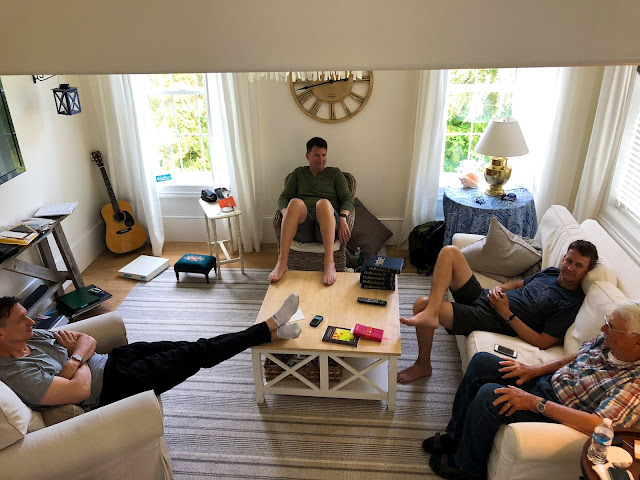 And of course picture taking is part of being together, to capture these moments that are few and far between for us. 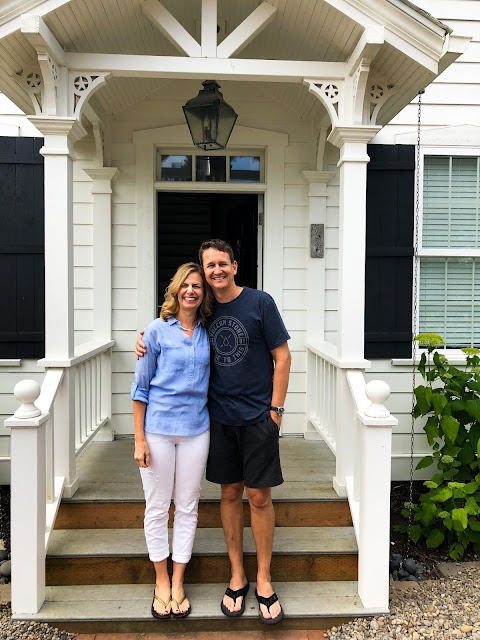 Spending these days together reminds me once again of how thankful I am for family. 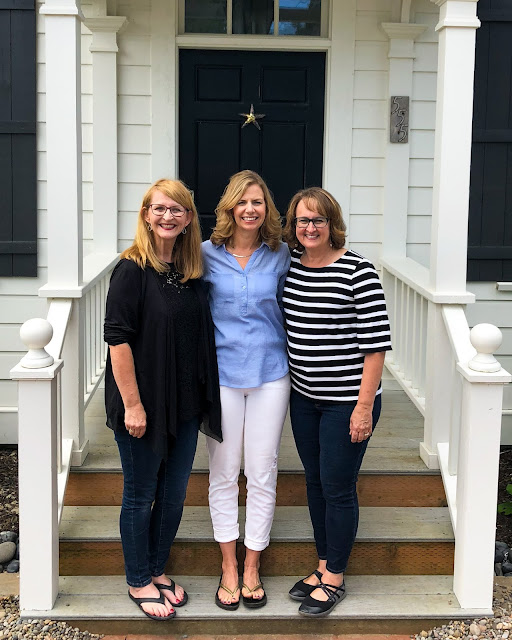 Our last outing for this time together took us over to the south end of Newport, just before going over the Yaquina Bay Bridge. 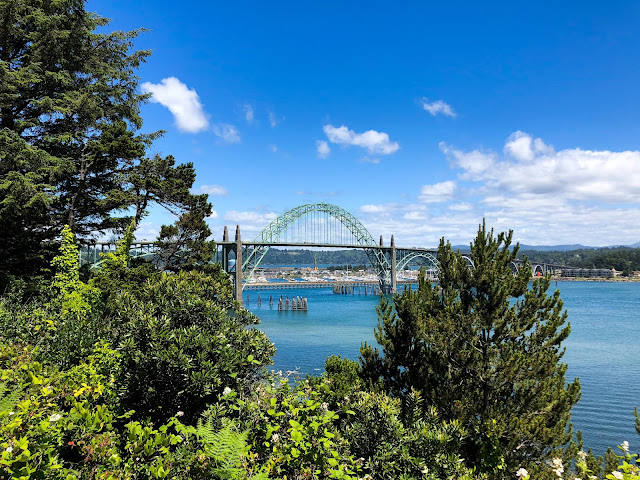 We came to see the other lighthouse in town, which was first lit in 1871. 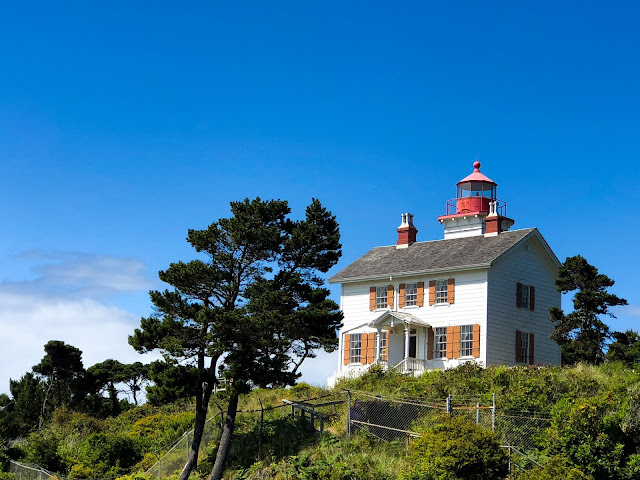 Due to a stronger light in the lighthouse at the other end of town, Yaquina Head, this one was only in service for three years before it was decommissioned in 1874. The light-keeper, his wife and seven children were the only ones who ever lived here when it was a working lighthouse. 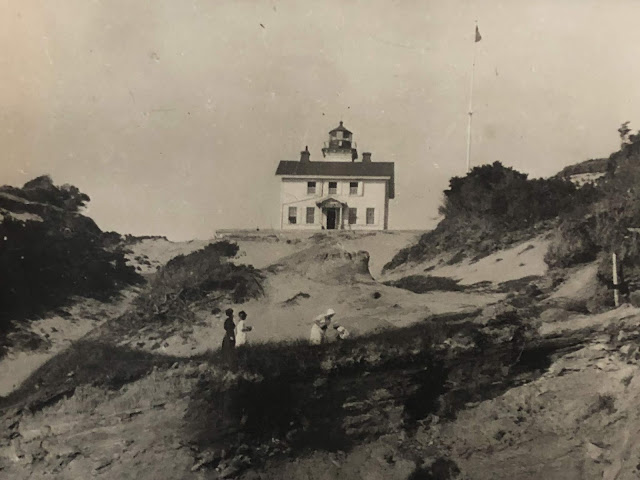 After its dectivation as a lighthouse it was used as living quarters for the United States Army Corp of Engineers, and then for the Coast Guard in the following years, and eventually a state park was built around it in 1934.

Almost demolished in 1951 due to decay, money was raised to save it and it was finally recognized as a historical site and restored to its current condition. 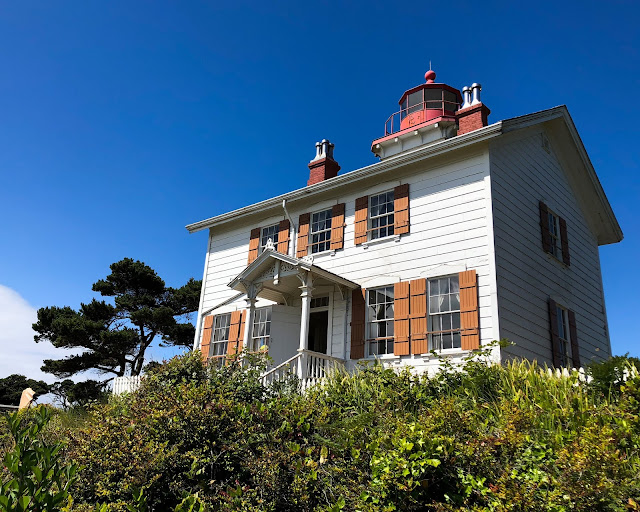 We were especially interested in seeing this lighthouse because the home we've been staying in was patterned after it! 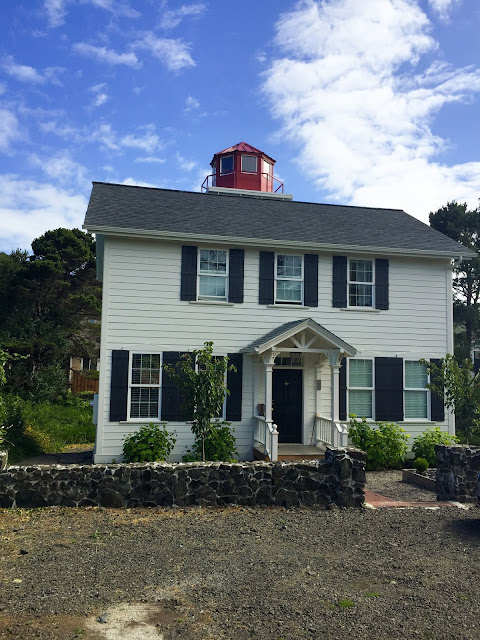 The layout of the house is very similar, with even doors and closets in the same places! We had fun walking through the original one and seeing all the similarities. 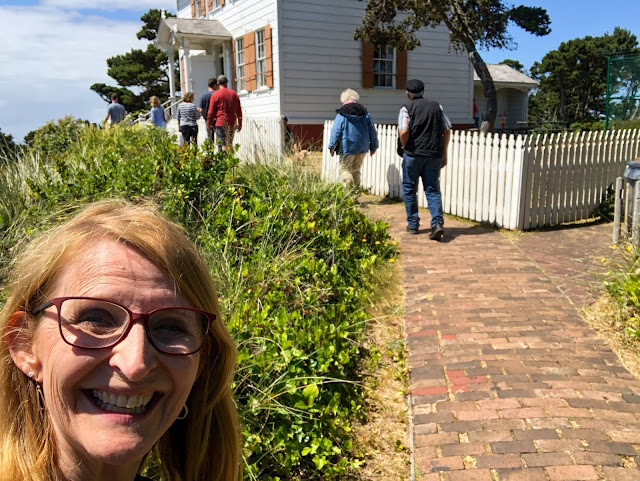 If you are in Newport it's definitely worth a few hours of your time to visit, as they have restored both inside and out with period furniture and decor. There's a great little gift shop in the basement too, along with a movie that tells about its history. 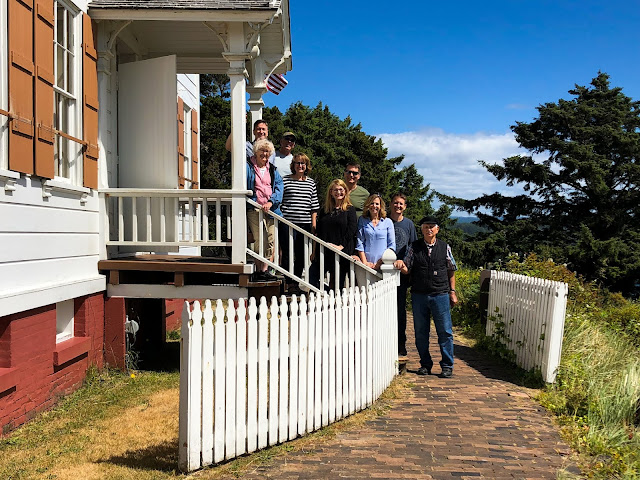 As we walked down the path I noticed a bench so wanted to catch a quick picture of Dave and I there. 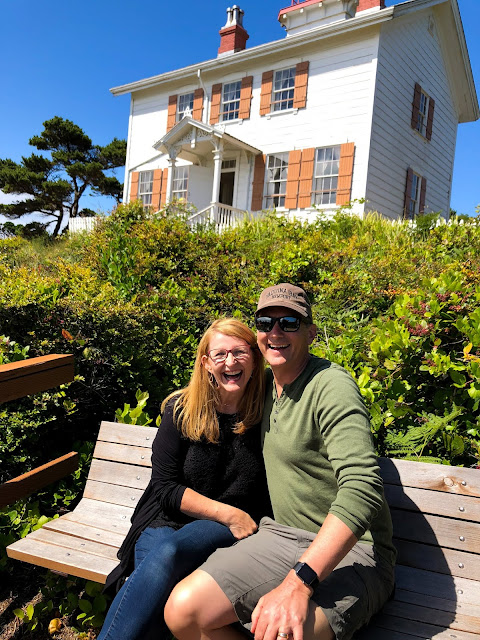 We then realized it was a great moment for a family photo as well. Thanks to a passerby who was willing to get just the right photo, we ended up with this one! 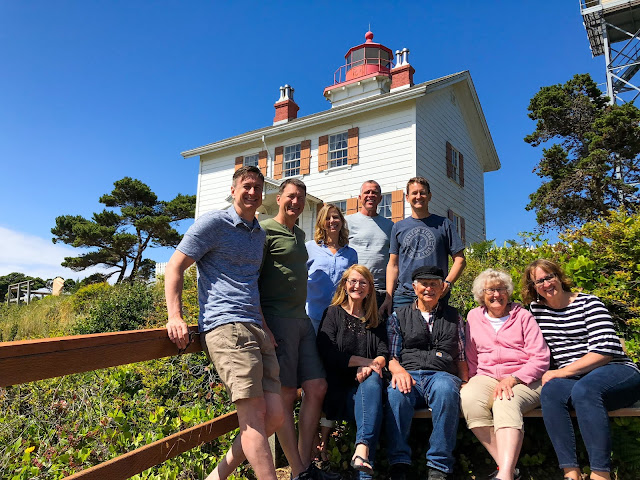 Soon it was time to head back to the house we've been staying in, just over the top of the hill in this picture. 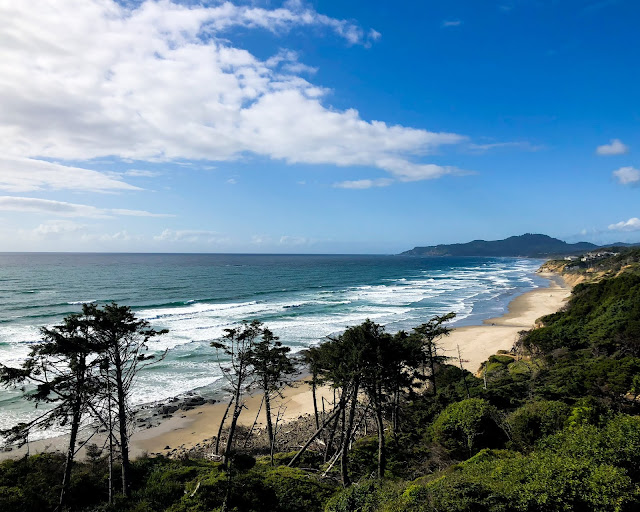 We made sure to get some great pictures of mom and dad with their kids. 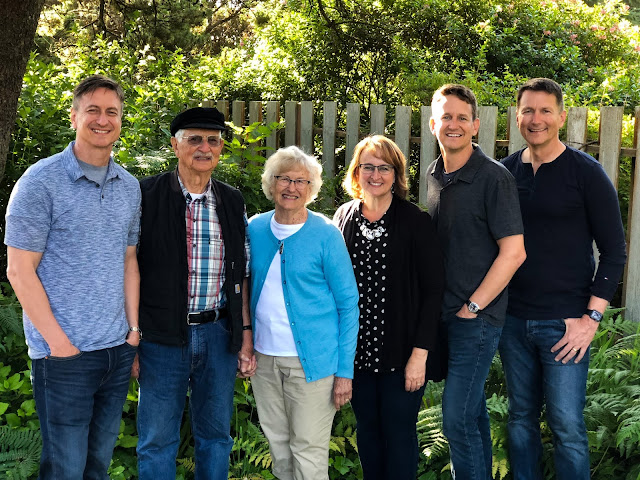 And then shared one last meal together. 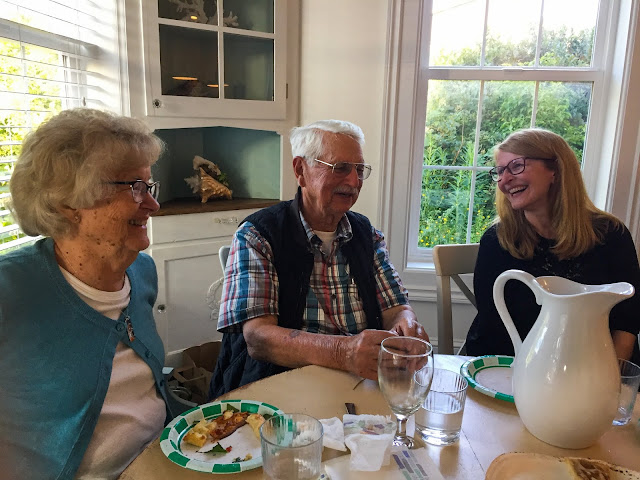 Dave and I have a plane to catch tomorrow morning so had to leave this evening, even though we didn't want to. Everyone else will be leaving in the morning.

This has been such a great family reunion! 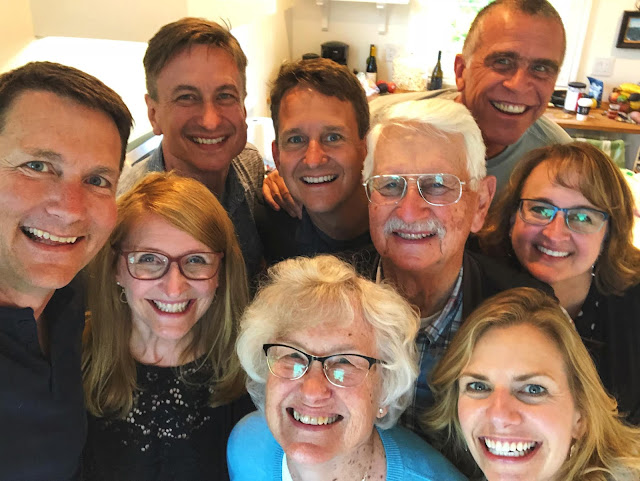 We're already thinking about when and where we'll get together next time!