Nonnie and Boys Go to Malenovice

It wasn't even 8 AM yet and we were in full play mode this morning after the parents had left for JV Winter Academy up at Malenovice. 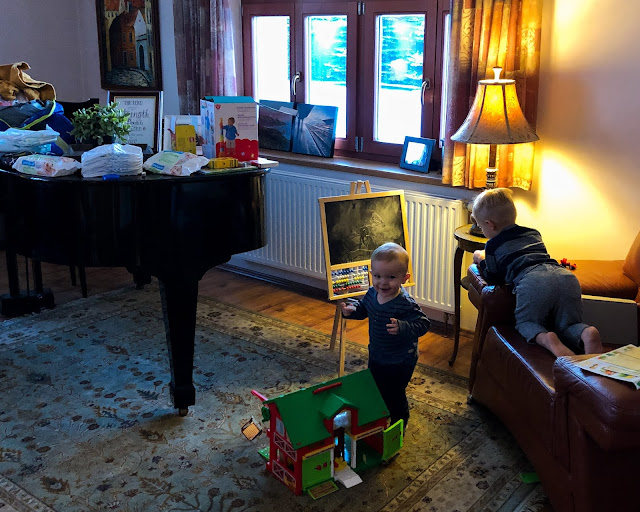 Asher seems to have chosen this week to be thoughtful of his Nonnie (or maybe he's just growing 😂) as he's been sleeping in until 9, which gives Charlie, Judah and I time together at the start of the day.

But soon Asher joins us and we're all hanging out in various places in the house! 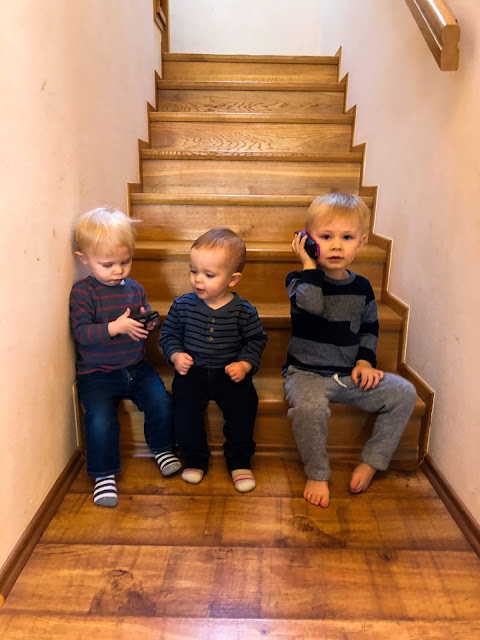 Today I had a bit of a sense for what it's like to meet these little's guys' needs, while at the same time knowing that I've had a session to get ready for up at Malenovice. I'm thankful that they are flexible and adaptable to go along with Nonnie's schedule! 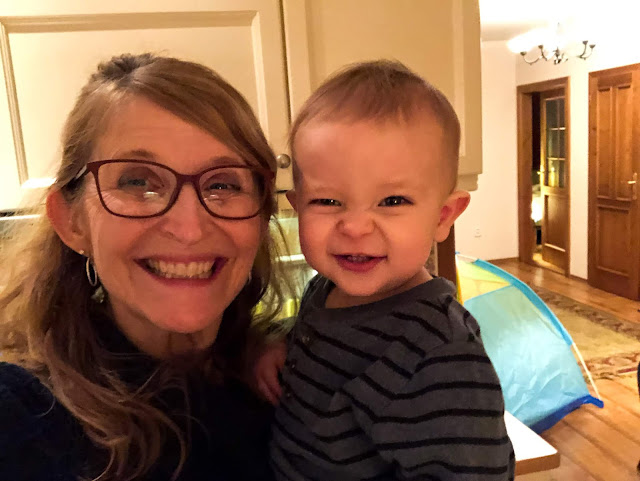 Caleb came down from Malenovice to help me get all three little boys into the car so that I could speak today on the Prayer Room for one of the groups who is here for Academy. 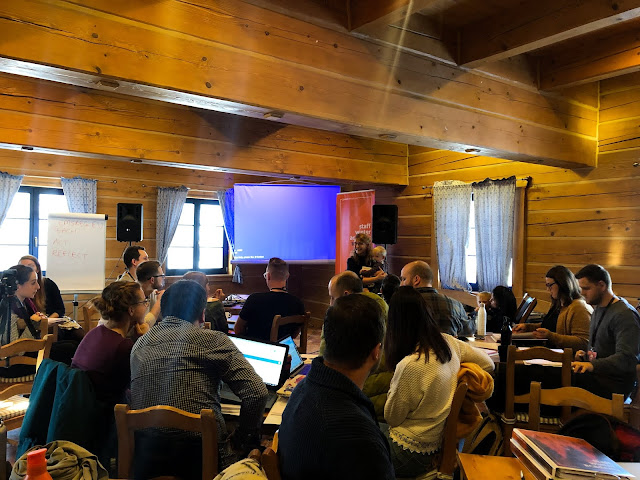 Since this is Caleb and Haley's group, Charlie got to sit with his mom and dad; but Judah and Asher's mom and dad are up at the hotel so not available for them.

Judah is a big boy and easily went to "aunt" Amy (you can kind of see them in the picture above, by the window on the right), but Asher would have nothing to do with anyone but me! So he sat quietly on my lap for the whole time that I spoke. 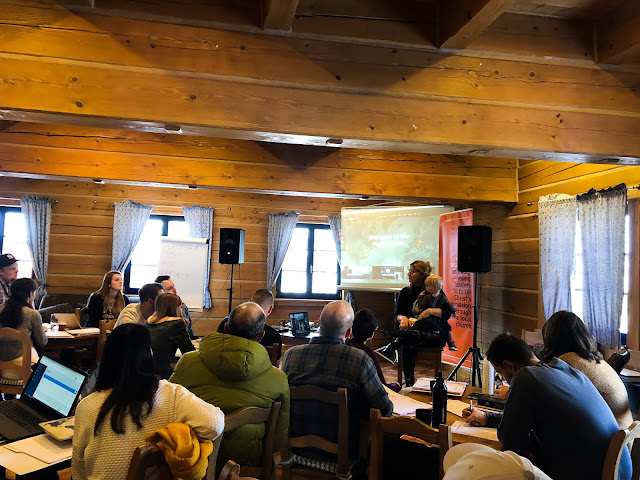 After returning home with Caleb who put Charlie down for a nap, I took a few minutes to go outside with Judah so he could kick a ball in the snow. 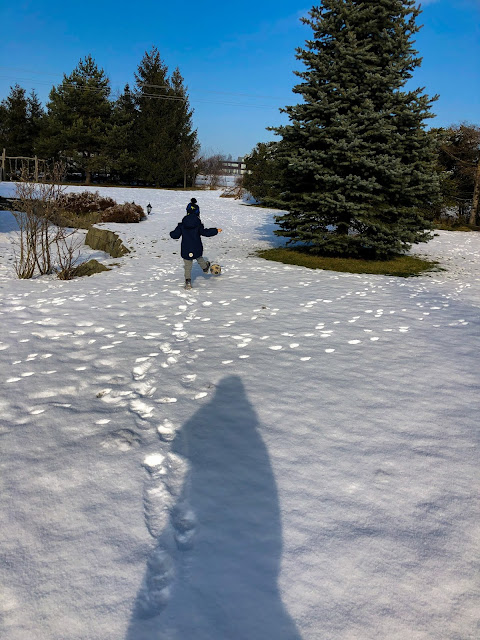 But with Asher heavy in my arms, about to fall asleep, we didn't stay out too long even though it was such a nice day!

They all took naps and I had about an hour to clean up the house and get dinner prepped for them. I now remember why I've learned to be so fast at everything! You HAVE to be when you have little ones at home or you don't get anything at all done! 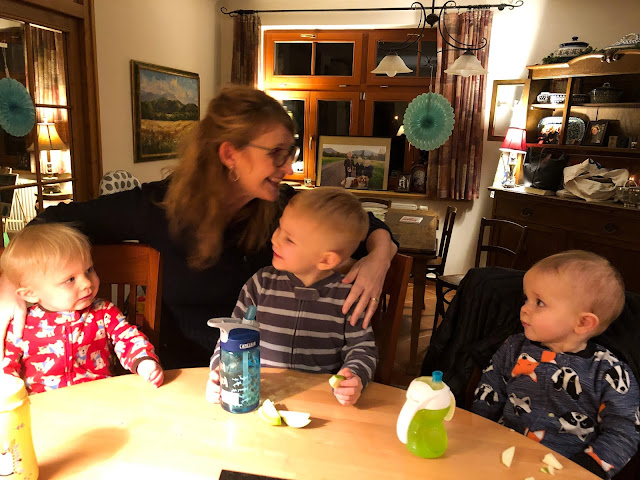 Our friend El came again this evening to help me, which meant she could take a couple of pictures for me to remember being with all the boys this week. I especially like the one above as I'm "in motion" which is really indicative of what life has been like these past two days! 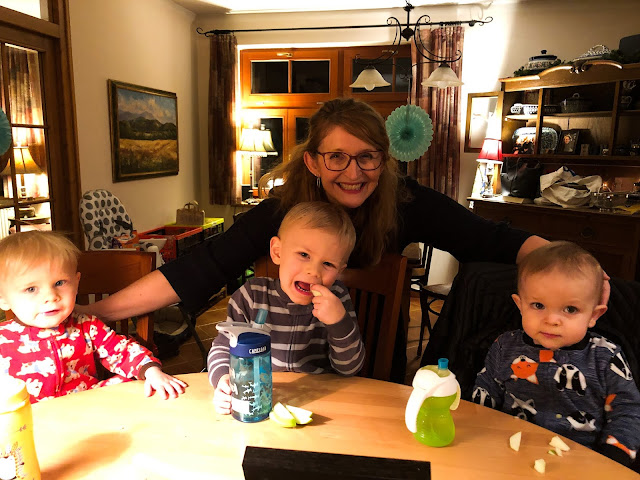 Tomorrow we'll only have Charlie for the morning as his other grandparents will come from Slovakia to pick him up to take home with them for some Mimi and Grandpa time.

I'm so glad we could have these days together with him, and I'm glad he'll get some time with them too!
Posted by Living By Lysa at 10:30 PM