This may be my favorite group picture from our trip to Israel. Are those some happy faces? 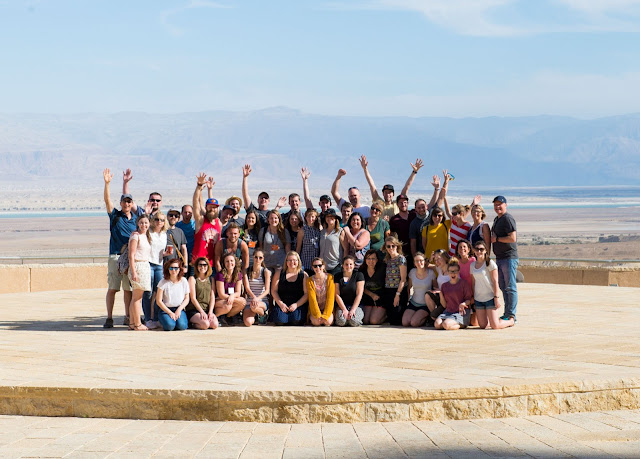 Oh how we do love our JV single missionaries! What an absolutely amazing group of "sold-out to Jesus" believers they are. I'm so thankful for them, and proud of them for all they do for the Lord in Central and Eastern Europe, bringing the good news, God's message of the Gospel, to young people.

While we've got happy faces on, this picture was taken at a very sobering place in the nation of Israel.

Masada, the ancient fortification site where Herod the Great built an enormous palace, was the final place of the Jewish nation when a remnant took refuge there in 73 AD. Rather than submit to slavery to the Roman troops who besieged them, it is believed they committed mass suicide.

And thus ended the nation of Israel until 1948 when the proclamation was made on May 14th by David Ben-Gurion: "We hereby proclaim the establishment of the Jewish state in Palestine, to be called Israel."

In the 68 years since then, Israel has fought hard to retain its statehood. In fact, if you know your history you know that the day after statehood was declared, they were attacked by numerous nations. And have been at war many times since then.

Yet, God has protected this tiny nation of his chosen people, despite continued and concerted efforts to destroy them.

Today, it's a complicated and complex situation in the Middle East concerning the existence of Israel. I can't even begin to comment on it.

The only thing I can say is that my heart breaks at the suffering of the Jewish people, and hurts because so many do not believe that Jesus was and is the Messiah.

Dave boiled it down for us as he spoke throughout our week in Israel. There are two questions that must be answered concerning Jesus:

Was he the Son of God?

Is he the Messiah?

If the answer is yes to both of those questions, then you have to make a decision about what to do with Jesus.

Thirty seven years ago I said yes to both, putting my faith in Jesus to forgive my sin and letting him draw me into a relationship with him. I've never regretted that decision. Ever.

If you haven't already, I hope and pray you'll do the same.
Posted by Unknown at 9:00 AM