On Location with Jesus

We began this morning with an hour bus ride north to an ancient Roman city, Caesarea Philippi, located at the base of Israel's highest peak, Mt Hermon.

Lovely to look at, this is the headwaters of the Jordan River. 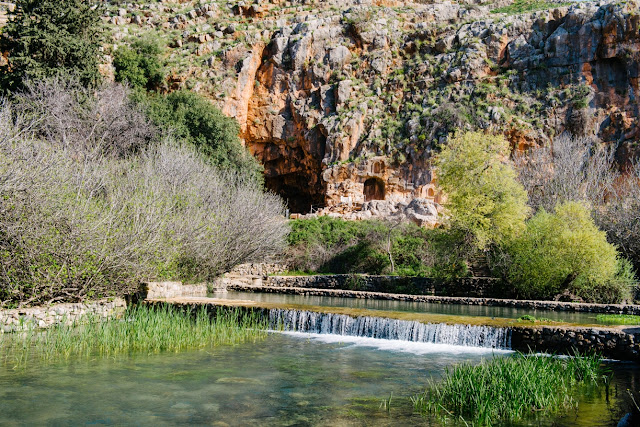 Yet there is a 'darker' side to this serene spot.

It was a site dedicated to the worship of Pan, the Greek god. Children were sacrificed here to appease him, and it was thought to be a gateway to the underworld, a 'portal' into hell.

And Jesus brought his disciples as recorded in Matthew 16:13-20. What must they have thought after a three day walk here, coming to a place of pagan worship? Any 'good' Jew would never step near here! 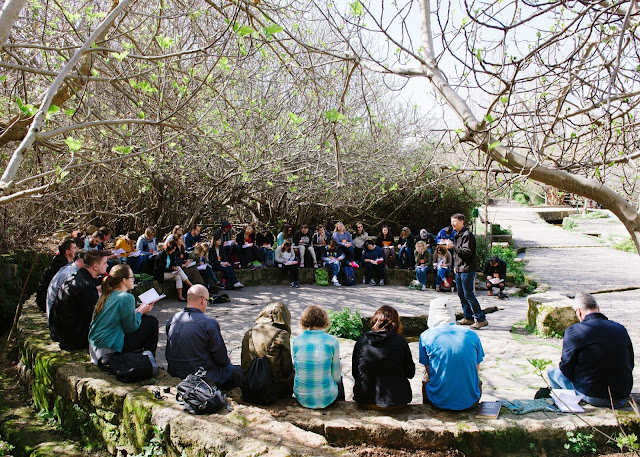 Dave's teaching at this site was powerful this morning as he talked us through his thoughts on why Jesus brought them here.

In the face of all the 'competing gods' of the day, he asks them "Who do YOU say I am?" And when Peter replies, it is the first time recorded in Scripture that he is called the "Messiah" - the deliverer, the one above all others.

"We're not letting this place be marked by pagan forces!" Jesus seems to communicate to them.

Rather he tells them that "the gates of hell will not prevail". That his power and might will surpass all others, and that his church WILL be built.

And it was! Built on the 'bread of life' and 'living water', Jesus' bride, the church and its people, have prevailed despite all odds that would have bet otherwise.

My friends and I are living proof of that! 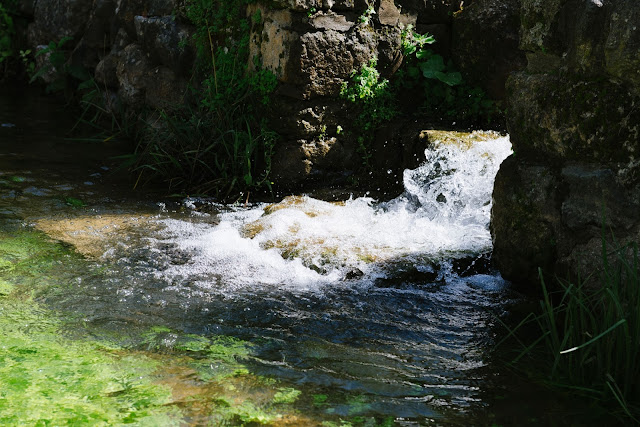 Although I think most of us could have stayed here for several hours to digest all that we heard and learned, we were off to our next site, crossing the Jordan river on our way back down towards Tiberius.


Next stop: Capernaum, the home of Jesus during this 3 years of ministry. 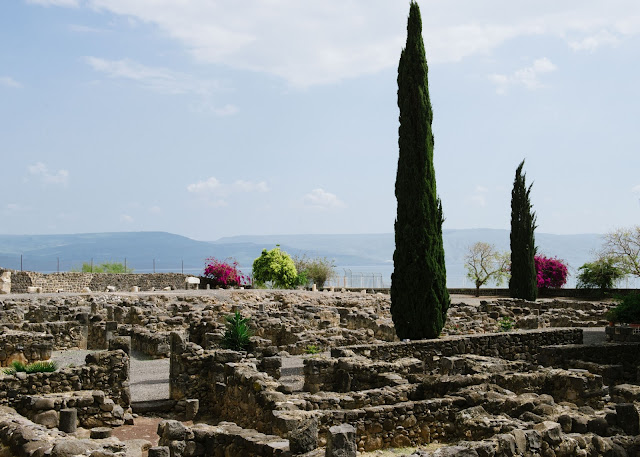 It is thought by archeologists that Jesus had a room that he stayed in at Peter's house here in the village which now lies in ruins. What must life have been like here back in those days when he called his first disciples, fishermen who made their living on this body of water? 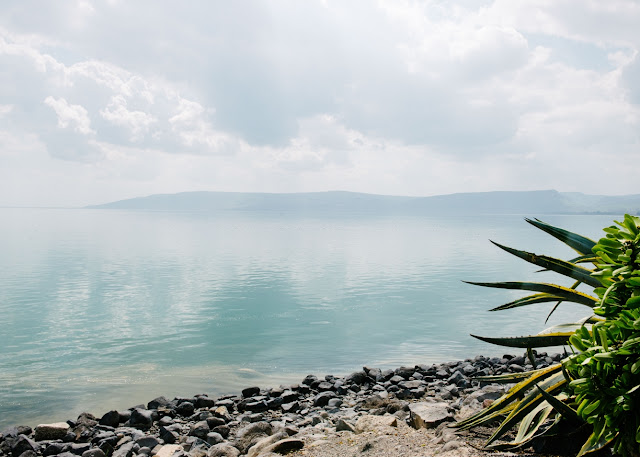 When I saw some of our guys down by the water I couldn't resist a photo. Can you imagine Jesus' disciples a little better by seeing these guys right in the spot where some of the disciples were from?

And two of them are even brothers, just like James and John! 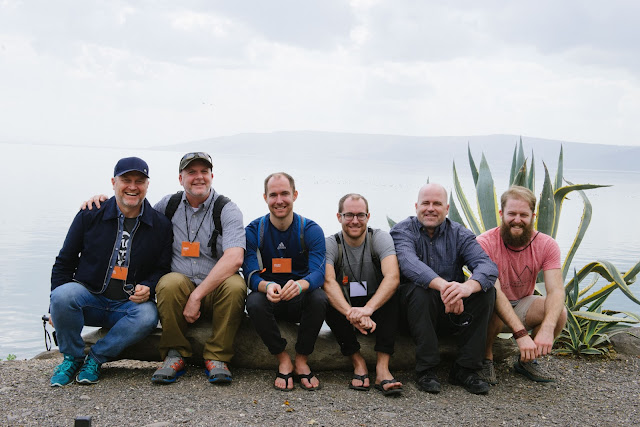 Sticking with our theme of the disciples, our lunch stop was at St. Peter's restaurant on the shores of the sea of Galilee where we dined on St. Peter's fish! 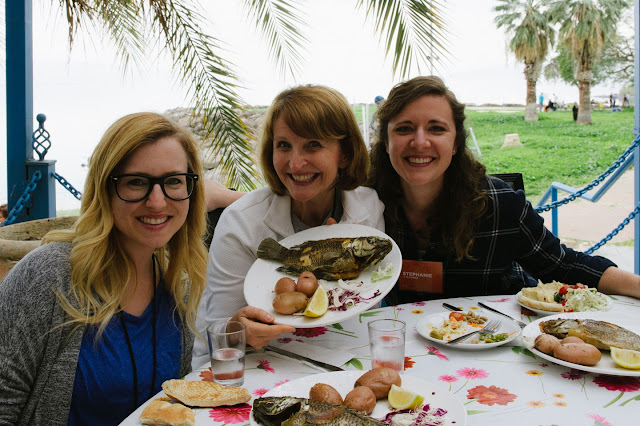 As you walk and eat in these places where Jesus did the same, it's a bit surreal. Jesus was here!! And here...and here...and here. It's truly so special to be in such close proximity to where he lived and did ministry. 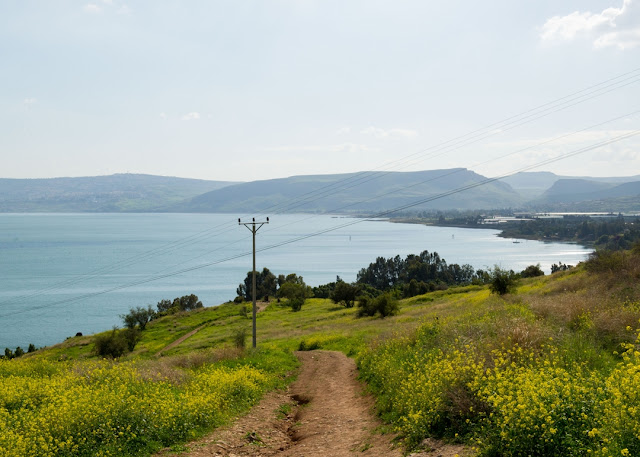 We headed over to the Mount of Beatitude, where it is thought that Jesus gave his famous sermon on the mount.

And so, Dave did the same! 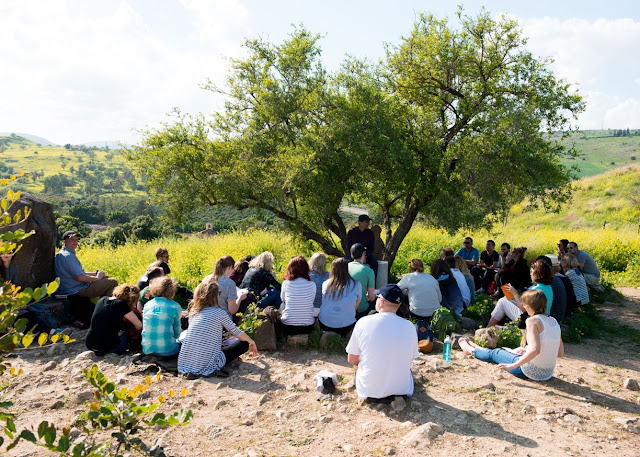 Here Dave talked about what made Jesus' teaching so memorable. He was relevant, used common things he saw for illustrations, made it personal, talked directly to them, gave them specific application (like, "Don't worry!"), was visual, used pictures and kept it simple so they could understand.

Dave's takeaway nugget for us: "To teach like Christ we must connect Truth and life."

It's amazing that teaching done in a setting very much like where we sat today has been passed on to people for two thousand years. And we're still talking about it. 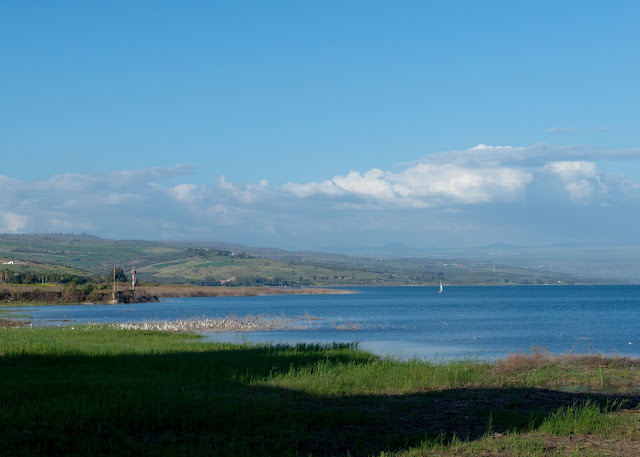 Well, it wouldn't be a trip to the Sea of Galilee (or Lake Kinneret, as it's also known) without a boat ride out onto it so off we went. 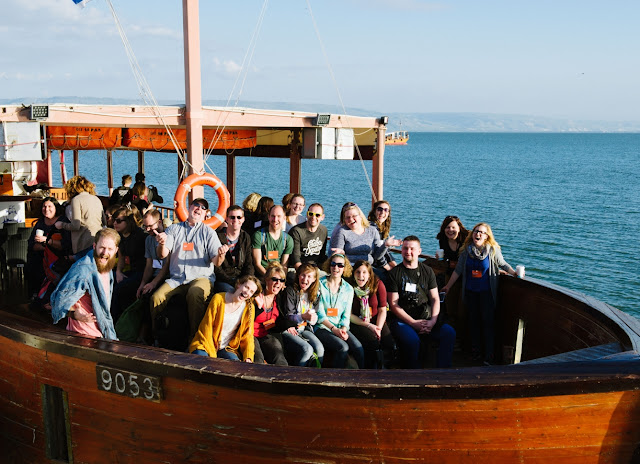 With weather that turned sunny and warm by late afternoon, it was so special to travel from one side to the other, just as Jesus and his disciples did.


Minus Dave, who's taking the picture, here we all are! Followers and disciples of Jesus. 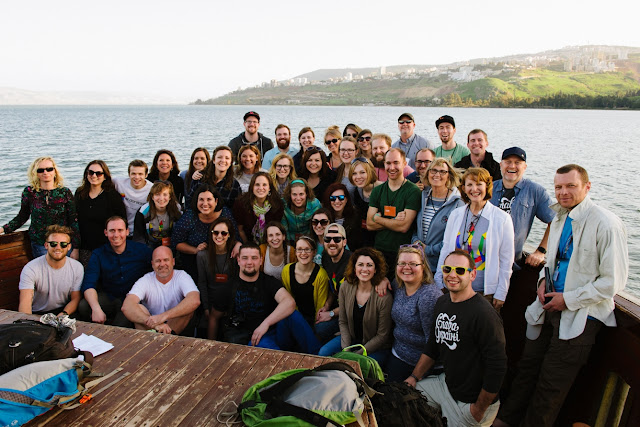 Stopping in the lake for a while, Dave taught from the boat one more time today, emphasizing how to teach from life to truth.

He talked about maximizing the curriculum that life gives us, and asking ourselves how can we turn to Jesus in the midst of our problems, as well as what is this problem exposing in me that I need to grow in. 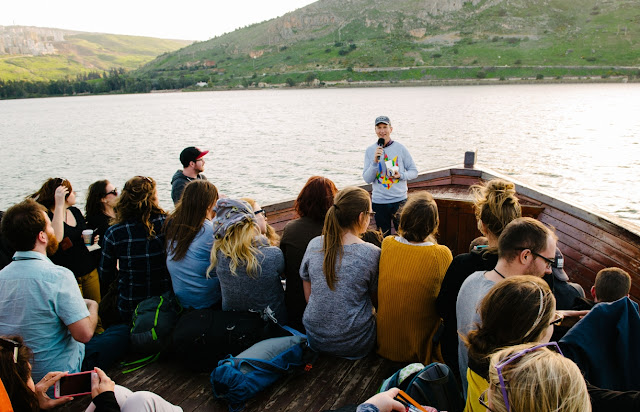 After a time of worship and prayer, the atmosphere changed as we learned a Hebrew song and then did a little Jewish dancing. So fun! 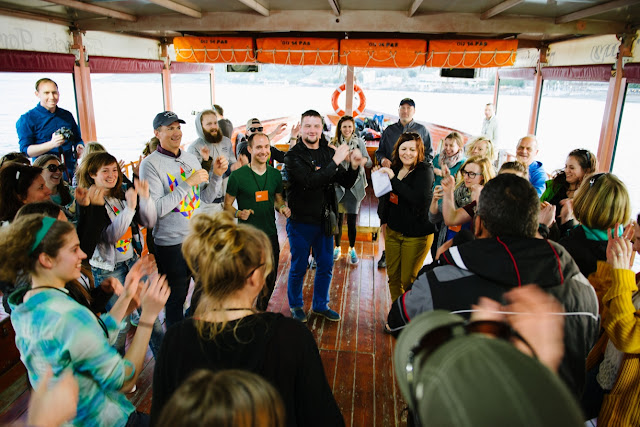 Being with this group of JV missionaries is truly a privilege. They are devoted followers of Christ, sacrificing themselves for the sake of sharing about him with young people throughout Central and Eastern Europe.

These two exemplify this trait: they only arrived last night, so missed our first day and a half. Why? 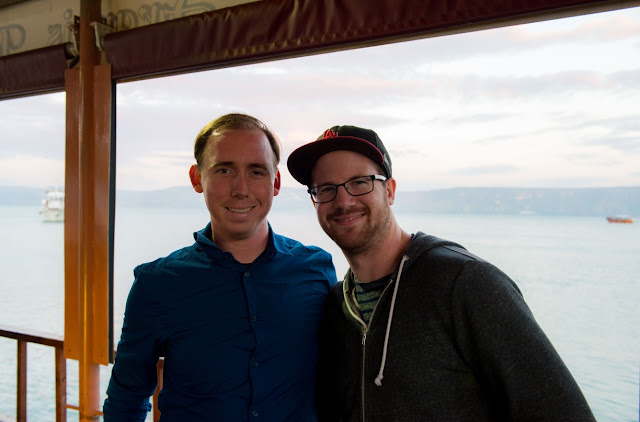 They serve on our Exit team and were on tour with the band, bringing the Gospel to yet another city in the Czech Republic. Thanks Tyrell and Brian!

It's one thing to move across the ocean, or serve in your own country, as a married couple. Of course there are challenges to that.

But these disciples of Jesus have come as singles, trusting him to provide and care for them in unique and special ways that are different from those of us who are married.

I'm so proud of them and view them with great love and joy, knowing that they are trusting God in deep ways as they lay down their lives to share about him.

JV single men and women: YOU ARE AMAZING!!! Thank you for all you do to bring the Gospel to young people in your countries. 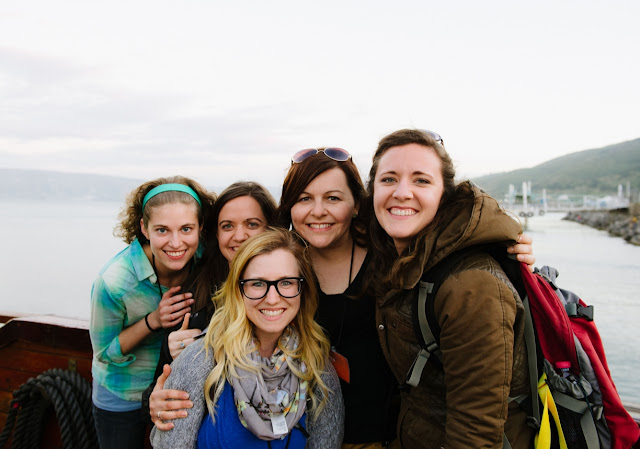 And one last note for today!

It's my mom's 75th birthday today! So I asked Dave to take a picture of me on the Sea of Galilee so I could send it to her and wish her a VERY happy birthday today! 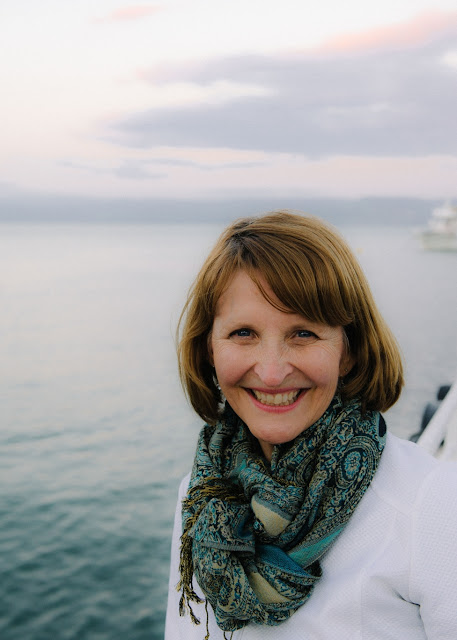 We leave Tiberius and head south tomorrow! Hoping there is internet at the next hotel so I can share whatever adventures tomorrow may hold.
Posted by Unknown at 10:44 PM