If I were to give an alternative title to this blog post it would be:

"Yes, After Twenty Two Years of Life in Czech I Still Make Mistakes"

Early this morning I ran an errand to Ostrava to pick up something for the Advance conference that was finishing up today, making it back to Malenovice to drop off things and then head directly to a dentist appointment I've been waiting for for three months.

Arriving to the office at exactly the time my appointment was scheduled for, I breathed a sigh of relief as I took off my coat and scarf, hung them on hooks in the waiting room and sat down to wait my turn.

A woman and her little girl were finishing up with the receptionist so I thumbed through a magazine while waiting to be called in to see the dentist.

As soon as the woman left, the receptionist headed through the door into the dentist's room where he works, which I assumed was to let him know I was there. A minute later she walked back out to the waiting area, faced me and asked in Czech, "Why are you here?"

It was a blunt question, but I pleasantly replied that I was here to get my filling.

"But you don't have an appointment," the receptionist replied.

"That's impossible," she answered tersely. "The dentist is not in today."

When I made the appointment three months ago in this same office, with this same receptionist, I remember going over the date and time carefully, double checking before I put it onto the calendar on my phone. I specifically remember it because we were actually making two appointments. She gave me one date in March and one in April, which I thought was interesting, wondering if there was a reason why my dental work had to be spaced so far apart.

While numerous thoughts ran through my mind about how this mix-up could've happened, the receptionist headed to the computer adding as she went, "You know you should write down your appointments."

After a quick glance at my chart she said, "Your appointment is for APRIL 14th, not March 14th."

UGH. Somehow I was a month early.

I still don't know what happened. Did I really misunderstand her a few months ago? I was sure that I had my months and numbers down pat in Czech after all these years of life here!

Oh well. At least I was a month early, and not a month late.

Because I forgot my phone when I went to the appointment (but I promise, my calendar said the appointment was for today!), I have no pictures from my little mishap. So here is an early morning photo from Jericho last week, to reiterate my point that it's better to be early than late! 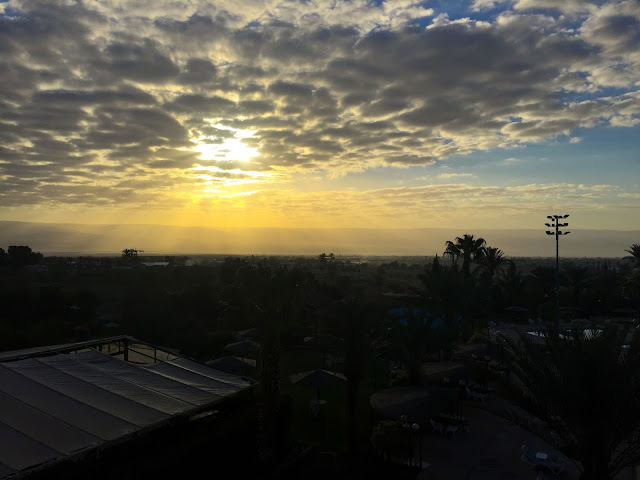