Riding out the Jugo

Do you hear me cheering in Croatia?? It was my best day yet after weeks of being super sick. I finally had a little energy today, and my throat isn't sore anymore. I also didn't need to sleep 16 hours today. While that was actually pretty wonderful for a few weeks, I'm ready to get back to regular life!

Wouldn't you know, a huge storm blew in today giving me a chance to get out for the first time in many days so I could see its beauty and power. 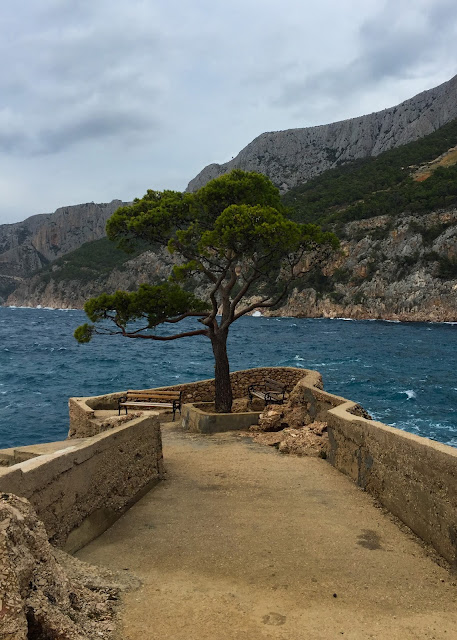 This is the famous tree of the small village of Sveta Nedjela. The very first morning we arrived onto this island in 2008, we saw this tree. I'm almost certain I've seen it every time since then over the past 9 years. It wouldn't be a complete trip here without seeing it!

But today, it was in spectacular mode. 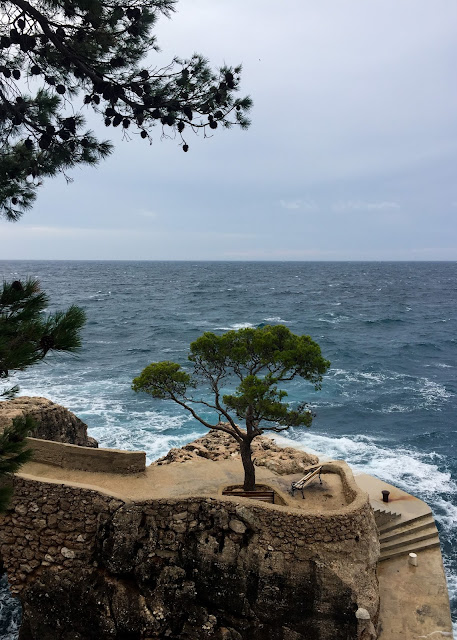 Croatia is known for its winds, and today is one of them called "Jugo".

A low pressure, warm wind that's not as strong as the infamous Bura, blew onto the Adriatic from the African Sahara. Seriously!

It causes high and choppy waves, with showers in between and people are often quite depressed by it, especially since it can last for more than two weeks. Actually, Jugo is usually to blame for bad moods and bad behavior in Croatia. I've heard that if someone notices you are having a bad day, they’ll ask “Južina?” referring to the wind. All you need to do is nod and you are forgiven for your sins that day.  Hmmmm! 🤔 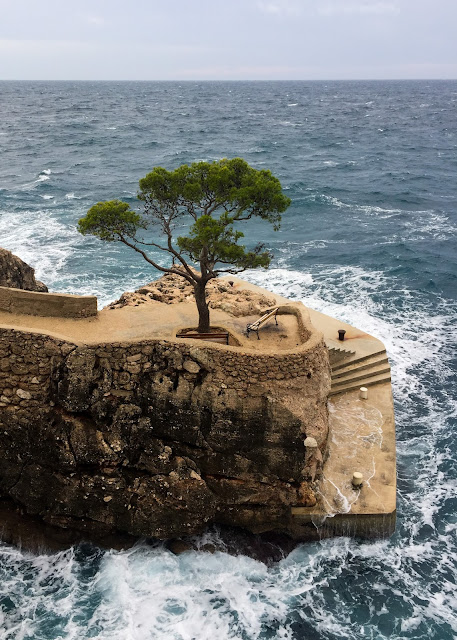 I had yet to experience a winter Jugo so the fact that I felt well enough to go out into it (with its reputation!) say's something!


Nobody else was down at the marina today. Why would you be?? It's crazy down there! 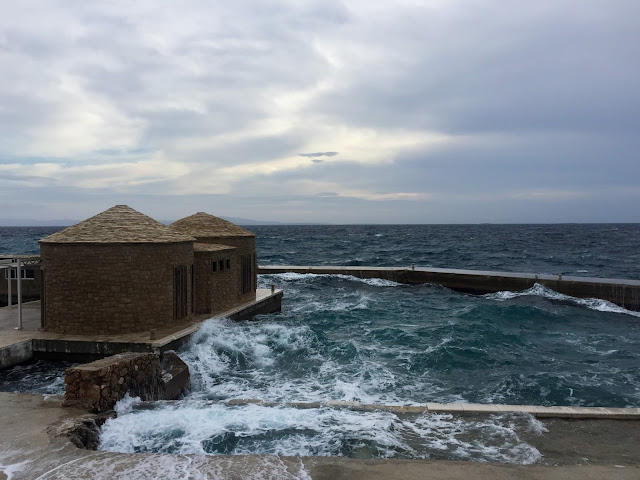 There are some serious waves out there, and even the boaters (well, except for one) have sense enough to take theirs out of the harbor. You don't want to play around with this wind storm. 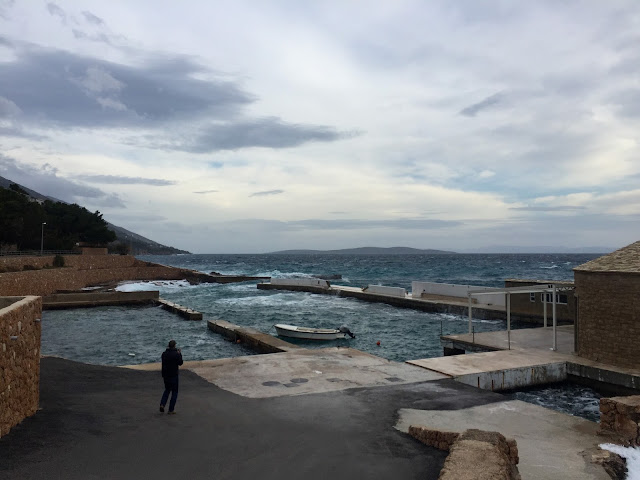 It might be hard to see, but just over the horizon of the boat is a wall, that looks like its split in two. That's because it DID yesterday! The waves were pounding so hard it broke an iron reinforced wall. Does that tell you something about what this wind does? 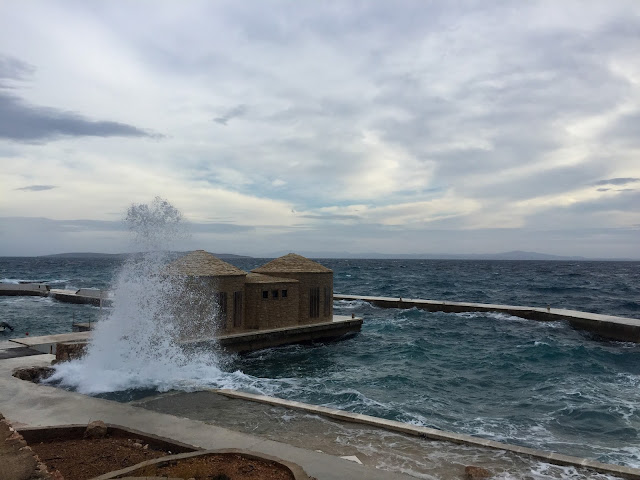 Those buildings are a restaurant in the summer, and that harbor often has some pretty fancy yachts tied up as they enjoy a long, leisurely lunch or dinner at the marina. Not today! 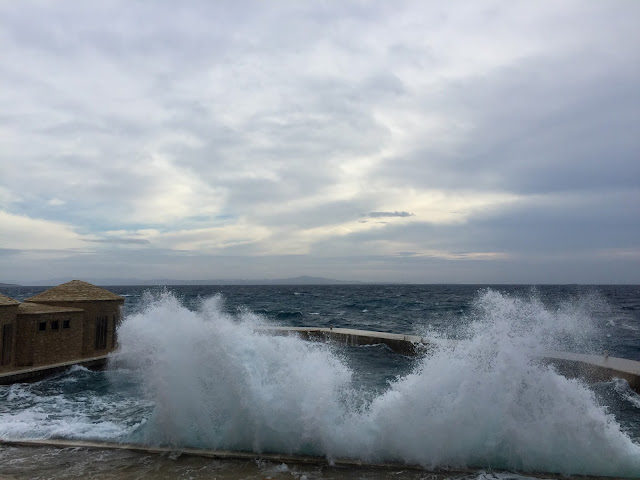 I have to say, it was pretty freaky watching the force of those winds bash against the walls. Yet who can believe how beautiful its fierceness is??? Just best enjoyed from a distance! 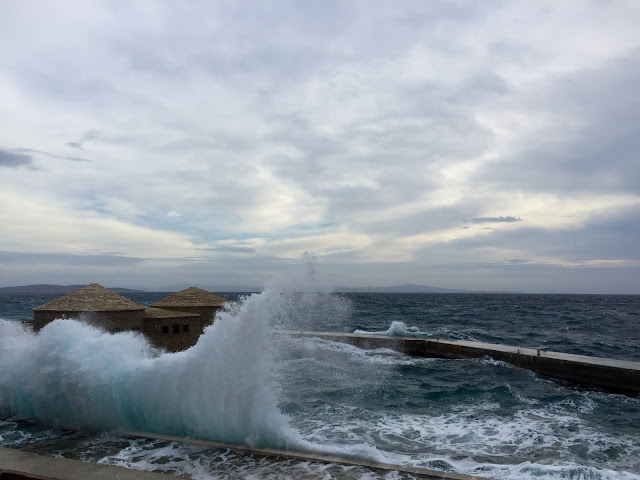 All I could think of was how awful it would be to ride out a storm like this in a boat. NEVER! 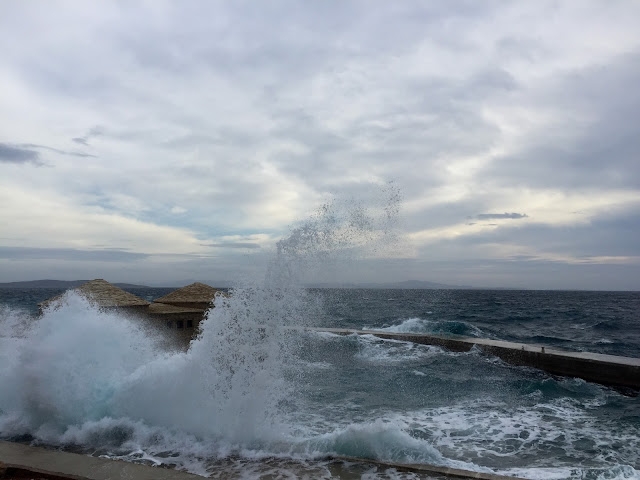 Dave went down closer than I did, hoping for some spectacular shots. He got them, and he got a bit wet! 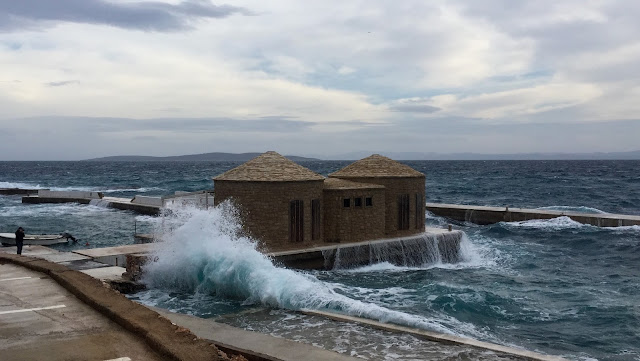 Since we were out, Dave suggested we drive down the road to Camp Lili, the campground we vacationed at in 2008, the time we fell in love with this island. We've been coming back ever since. 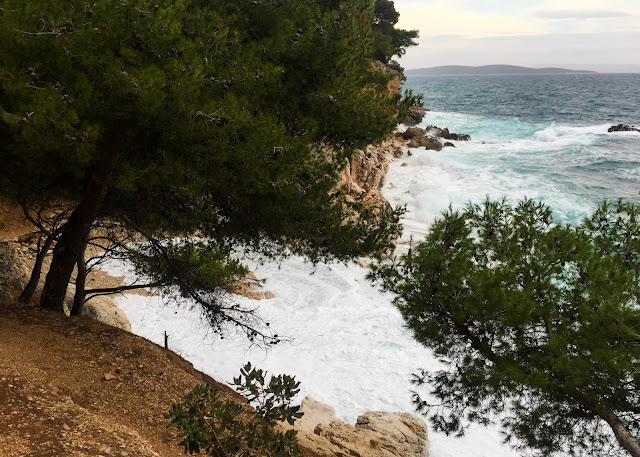 It too was, of course, deserted, (though our friend who stopped by this evening said, "Oh yeah, Aunt Lina said you were there today! This is small village life at its best!).

I don't know why I didn't think to get a picture of Dave and I down here...I guess because he was down at the beach capturing some more incredible shots while I stayed safer (and drier) up on the path! 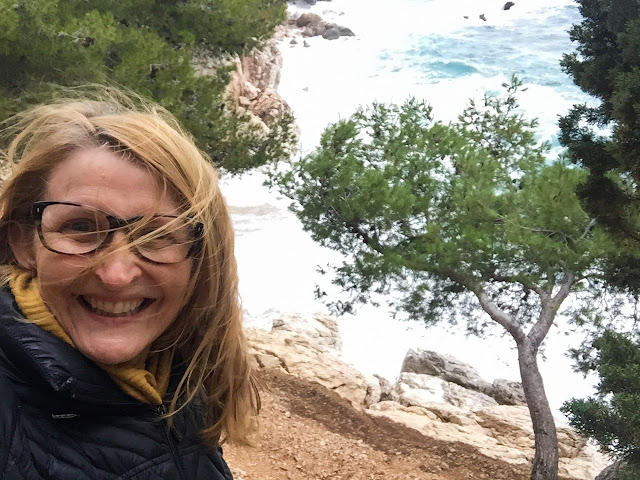 We leave from here tomorrow...just when I was starting to feel better. 😌  But we are headed for a wedding in the States, to be with our camping/vacationing buddies to celebrate the marriage of one of their sons who is getting married. 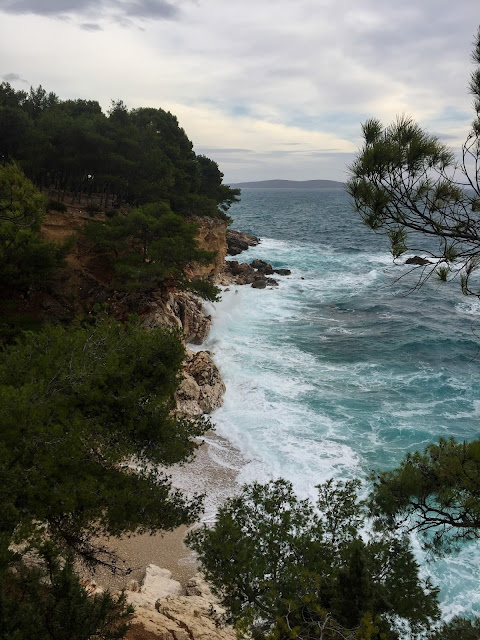 I'll take more Croatia memories with me as I rendezvous with our dear friend this week-end!
Posted by Living By Lysa at 10:03 PM