But rather a Josiah Venture Marathon with students on the campus of Wheaton College! 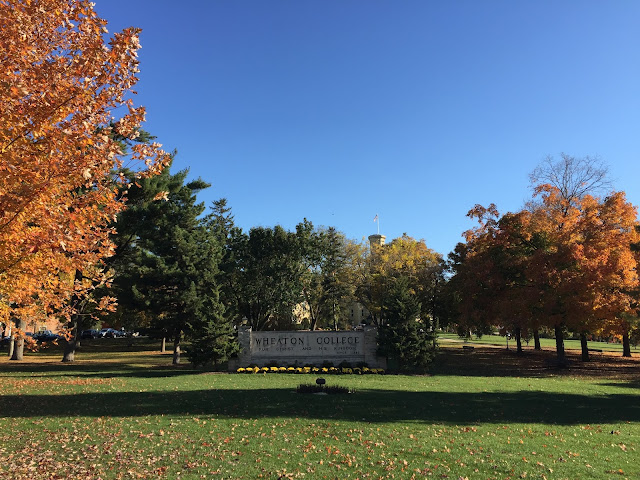 Dave and I arrived this morning to their beautiful tree lined campus in all its fall glory. 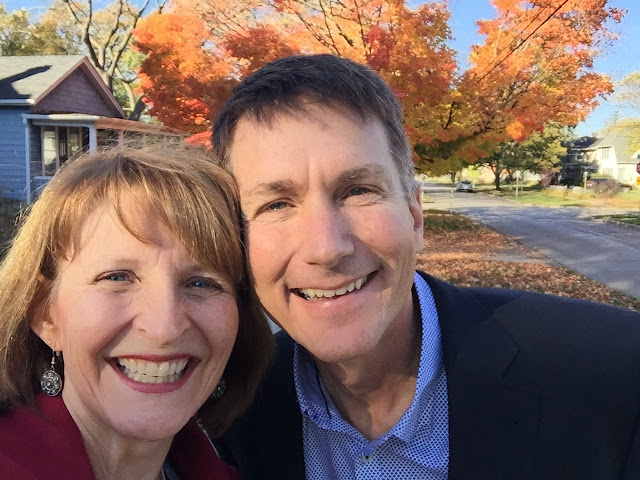 And headed over to Edman Chapel for Dave to get ready to speak to the student body during their Monday morning chapel.


This is a special privilege as Dave is an alumni from Wheaton, and it's the first time that he's been invited to speak for chapel.

While Dave did a sound check, our team, who are here to share in this JV day on campus, hung out together. So fun!!


We all headed back stage to pray with the chapel team, which really blessed me. Their prayers were so dear for Dave, the students, for all of us there in support, and for the work of JV. 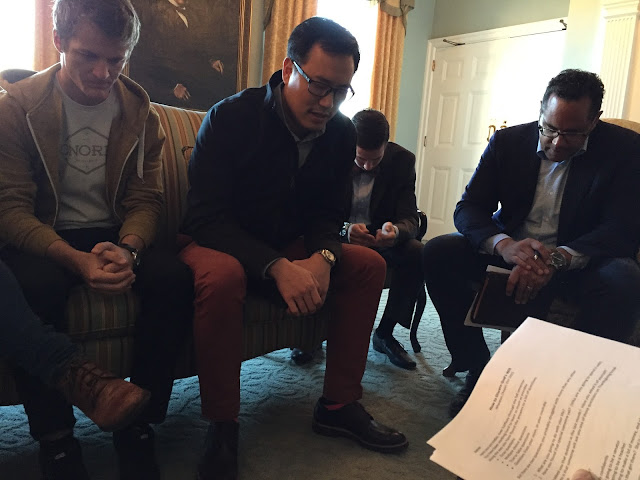 We headed back out into Edman just as 2400 students began to make their way inside. It was a very happy reunion with many people we love!


When it was time to begin, Dr. Timothy Blackmon, the new Wheaton undergraduate chaplain introduced Dave saying, "This may feel like an ordinary Monday morning chapel. But what if today was the day God speaks to you about your future, where you might hear God's call on your life? That's what happened to Dave Patty in 1991 when he was a student sitting where you are."

It was in a Wheaton chapel back then that Dave heard Anita Dyneka, from Slavic Gospel, talk about the "hinge of history" occurring in the Soviet Union at that time, which broke apart the 50+ year grip of Communism. It was that talk that led us to where we are today. 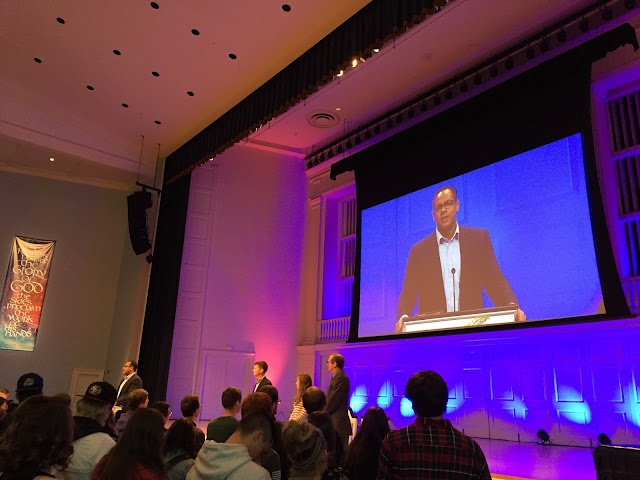 With that intro, Dave came to the podium and began to speak on how to discern the will God for your life. 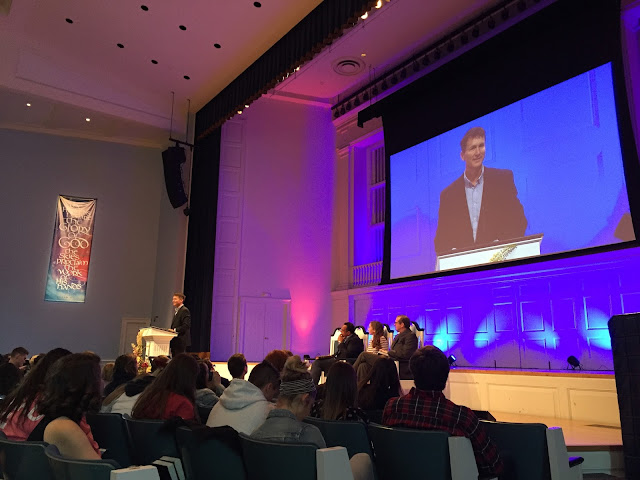 As you can imagine, waves of laughter rippled through the audience. What college student hasn't been asked those questions?! Dave spoke powerfully to their minds and hearts as he shared from God's word and personal experience about discerning God's will. 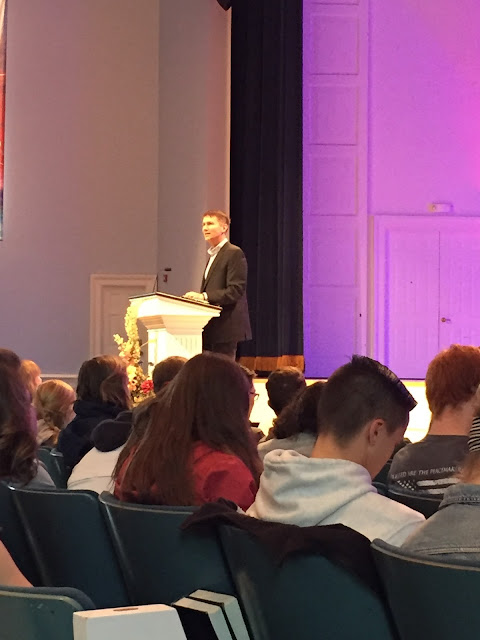 I know I'm biased so I'll tell you what many students told us afterward.

"That was the best chapel of the year so far", "I needed that practical help for discerning God's will", "You didn't just bring a big idea of yours, but keyed into us as students and brought something that meets us where we are." 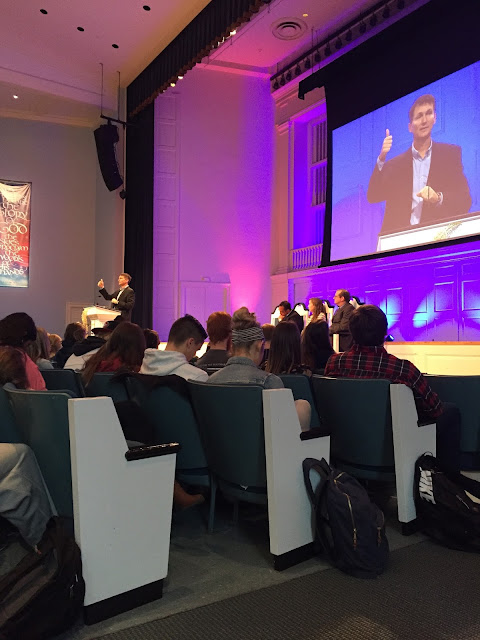 With only twenty minutes to speak, he moved quickly, but effectively, sharing his five fingered approach to discerning God's will: Word of God, Spirit of God, mind of God, people of God, and sovereignty of God. 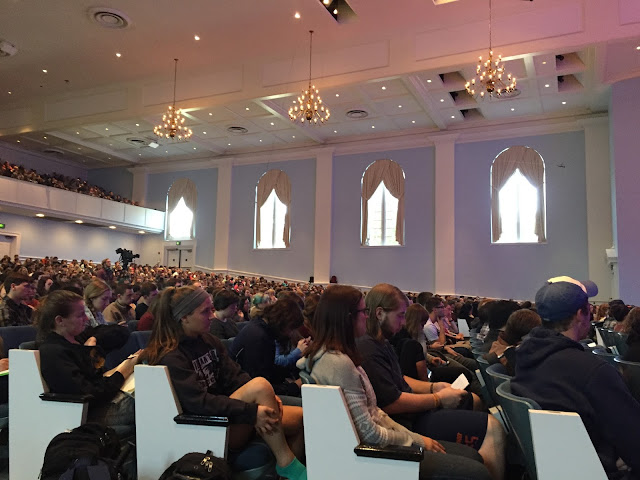 While he was not primarily speaking about Josiah Venture, he ended with a challenge to the students to surrender and seek, knowing that God's will for them is always the best.

"Some of you may be called to be Senators, some teachers, others of you will go into business and make lots of money and of course, give very generously to God's work [smile!]. But I'm praying that some of you are called into missions and remember what Charles Spurgeon said, 'If God called you to be a missionary, don't stoop to be a king.'"

Then he shared our newest video on young people from Central and Eastern Europe whose lives have been changed by Jesus. 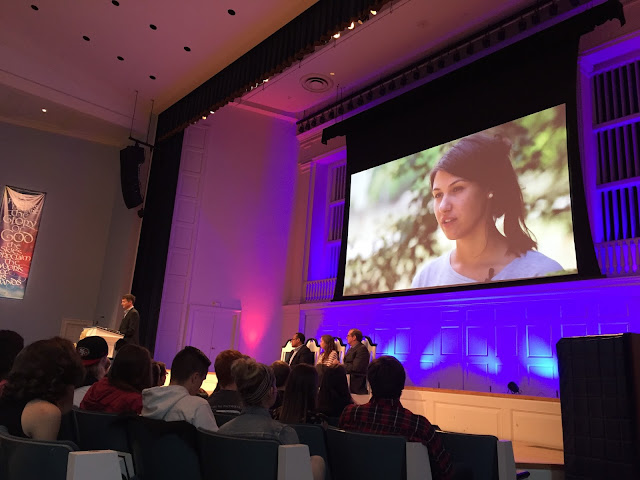 Finishing right on the minute he was supposed to be done (you don't want to go overtime when it's your first time speaking there!), we then happily connected with more students who are dear to us.

On campus to talk with students about our summer internship possibilities, several of our JV staff, including Daniel and Denisa Harcar, a Slovak couple serving with our team in Slovakia, met with students throughout the day. Daniel and Denisa both came to Christ at JV English camps, and are now a powerful team serving in the ministry in their country.


We had the privilege of being in a class, taught by a long time friend and professor at Wheaton, Jerry Root. He gave us the first part of his class to share about JV and our summer internship possibilities.

As a side note, Jerry was at the very first conference in the newly renovated Malenovice, back in 2001! 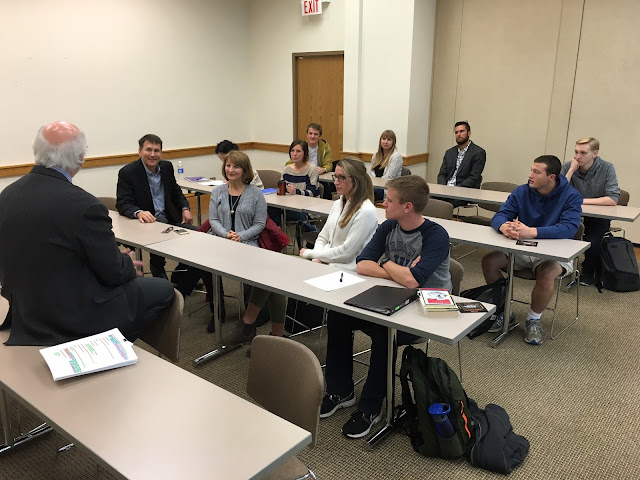 This school was such a significant place to Dave when he studied here.

Not only important because of what he received from exceptional professors who taught on how to educate for transformation, but also for how it shaped us as people. What an honor to be back on campus today telling about the ministry that had its spark of inspiration here. 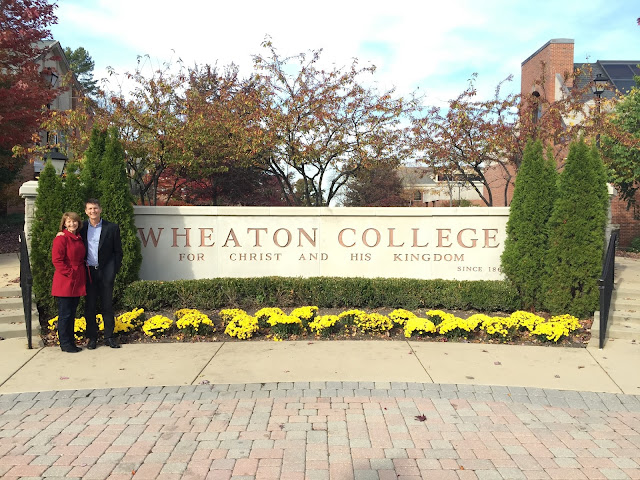 In the evening, Justin and Gretchen Hall hosted a bonfire at their home near the Wheaton campus, for an informal time of sharing more with students about the ministry of JV. Justin and Gretchen served on our team in Albania for many years, and are now at our home office in Wheaton.

And look who showed up for the bonfire!


On a perfect fall evening, around the warmth of the fire, with plenty of snacks for hungry college students, Dave shared more of the vision and ministry of JV. 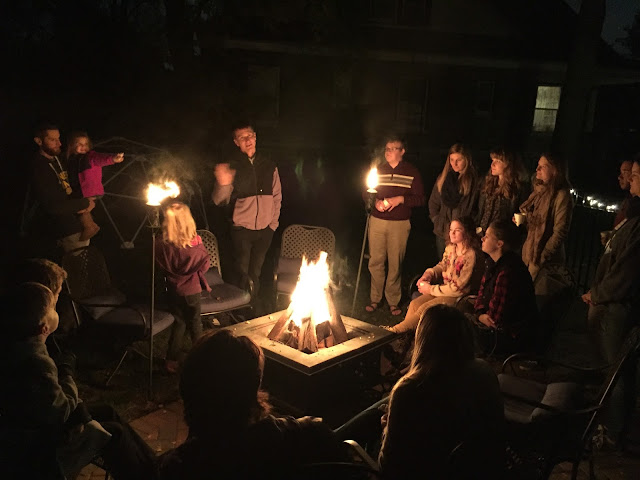 Mike, who serves in our home office today, shared about his ten years in Slovakia on the JV team, and about how he met Daniel and Denisa as high schoolers at a camp. Later, Daniel and Denisa shared their story of coming to faith, the first ones to trust Christ in their extended families. 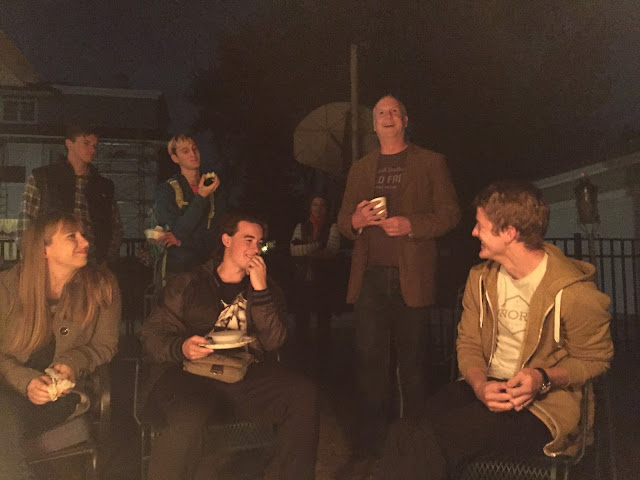 Our JV marathon day began to wind down as we said our goodbyes to the students later in the evening.

And a goodbye to this little fellow, Sully, who reminds me of our Kaylee back home in Czech! 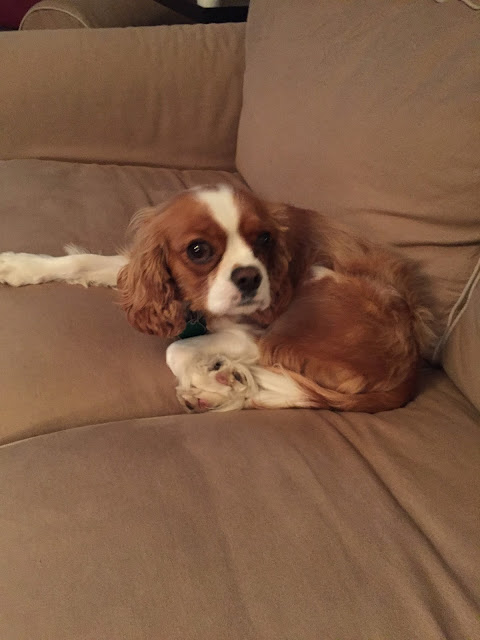 Finally it was time to say goodbye to Claire, at least for Dave, who won't see her again until Christmas break in six weeks. I'm sticking around for another two weeks so I'll see her in a few days after I'm back from the last of our travels. 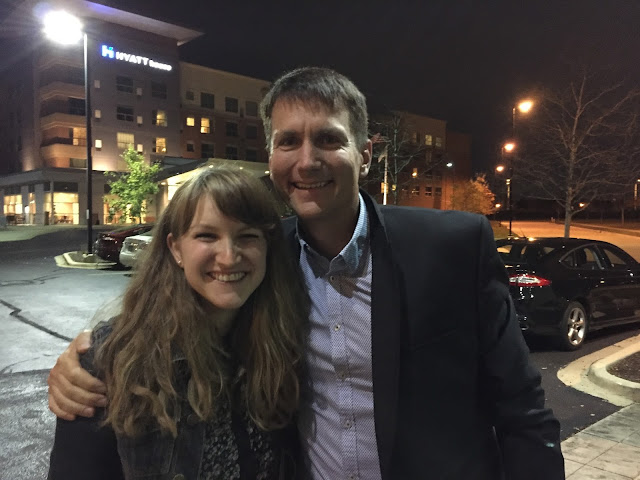 I drove Claire, and her Moody friends who'd come out for the bonfire, back into the city, enjoying talking with those three who've had significant life and summer experiences with JV! 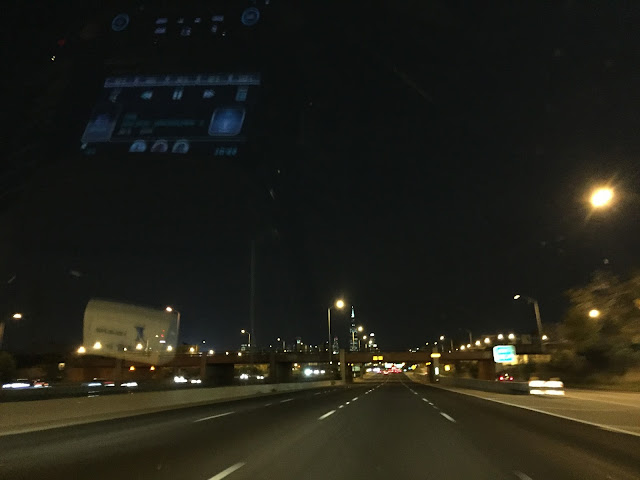 After dropping off her friends at the dorm, I drove Claire over to her apartment building, chatted a bit, then said goodbye and watched her walk back into her life at Moody Bible Institute. Glad I'll see her again soon as I'm not quite ready to say goodbye to her, or our other kids, yet! 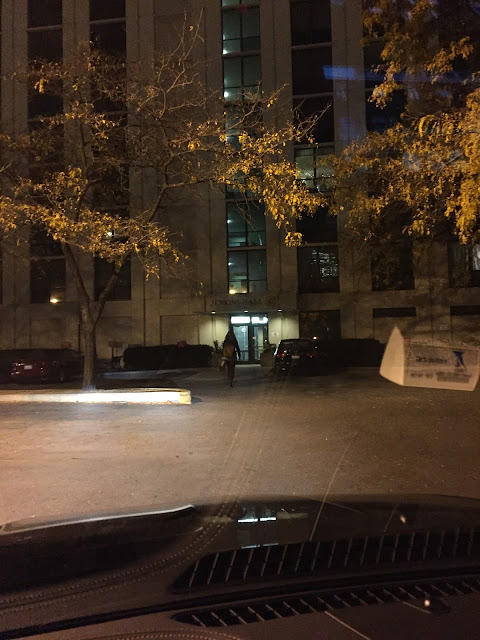 Twenty four years ago when we stepped foot on Wheaton's campus, I never envisioned where our lives would end up all these years later.

We arrived in 1991 with just one baby and ended up with three.

We thought we'd return to our ministry in Germany, but instead moved to the Czech Republic.

We assumed our time at Wheaton College would only be for that short season. Yet we've returned countless times over the years since then because of:

Dave ended his talk in chapel this morning saying, "As you listen to God and discern his will, a decision you make today could impact the rest of your life."

Which has certainly been the truth of what happened in our lives years ago when we said "Yes" to going into Central and Eastern Europe to evangelize, disciple and train up leaders there.
Posted by Unknown at 10:30 PM