You know the saying, "One man's junk is another man's treasure"?

We saw this in living color yesterday! 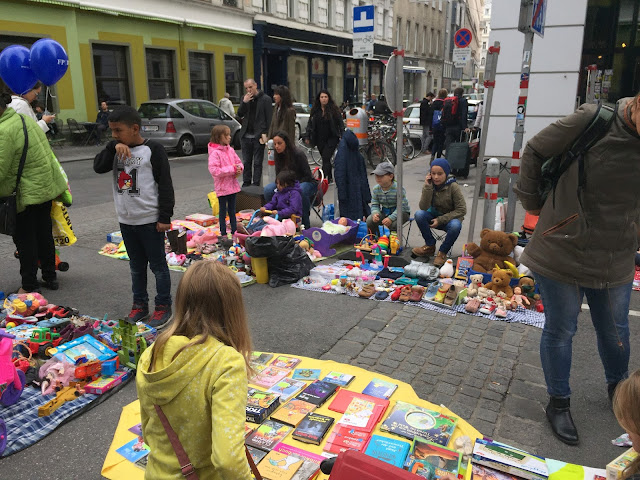 What do you do when you live in a city, don't have a garage or a yard, yet need to get rid of your junk provide someone else with some treasures?

Have a street sale! And even let the kids put out their things. 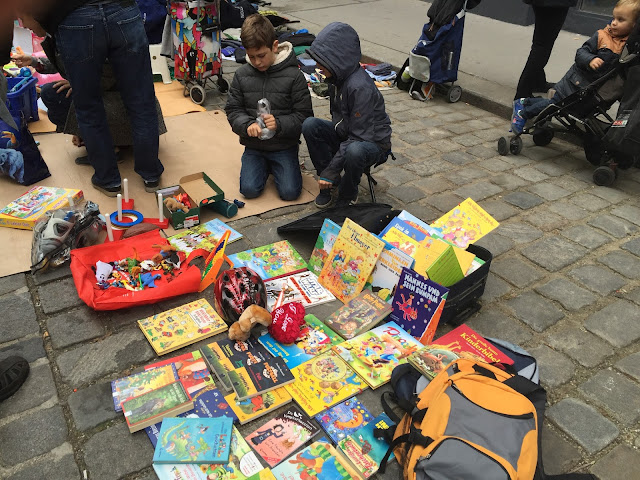 While in Vienna on Saturday morning, Dave and I stumbled across a gigantic "yard sale" happening on Neubaugasse, a long street closed off for two days to host the sale in the city. It went as far as you could see, and then some! 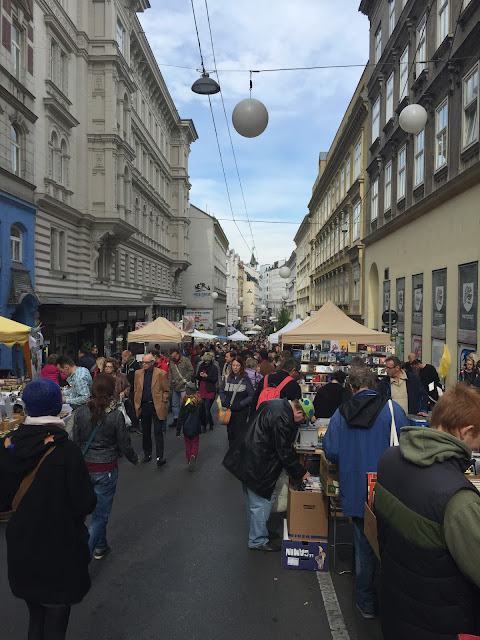 We started at one end of the street and walked all the way to the other end to see if there were any treasures for us. 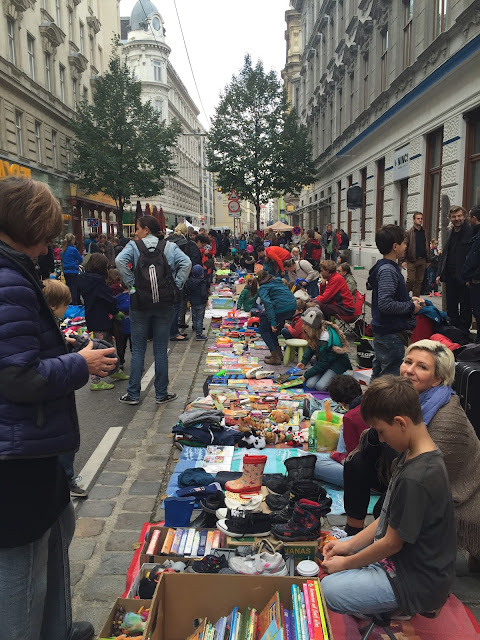 I'm not great at estimating numbers of people, but maybe there were 6000-7000 people?? Whatever the numbers, it was crowded and hard to even have a look at some of the booths, racks and tables. 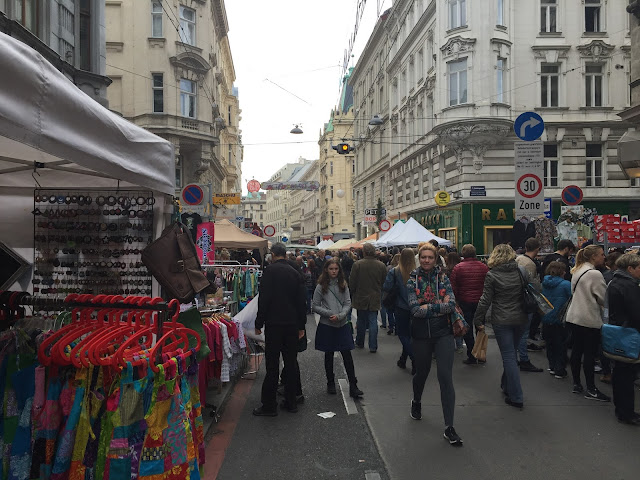 Dave stopped to ask how often this happens. To our surprise they do it 3-4 times a year! What a great idea. 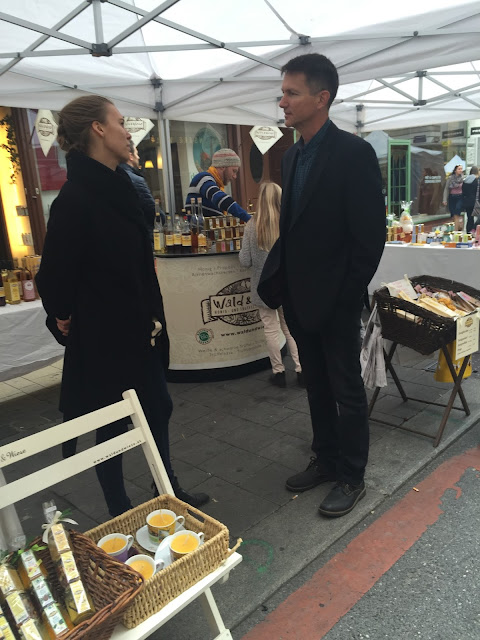 There was truly a little bit of everything along the way. 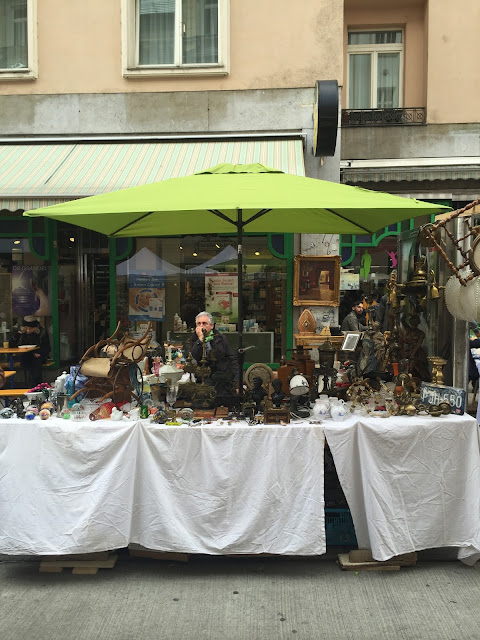 Including food if you needed to take a break! 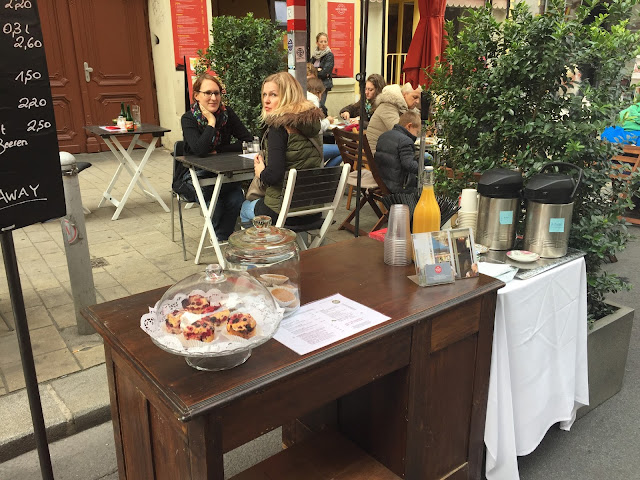 The vendors were pretty low-key, not pressuring anyone to stop, but helpful if you were interested. 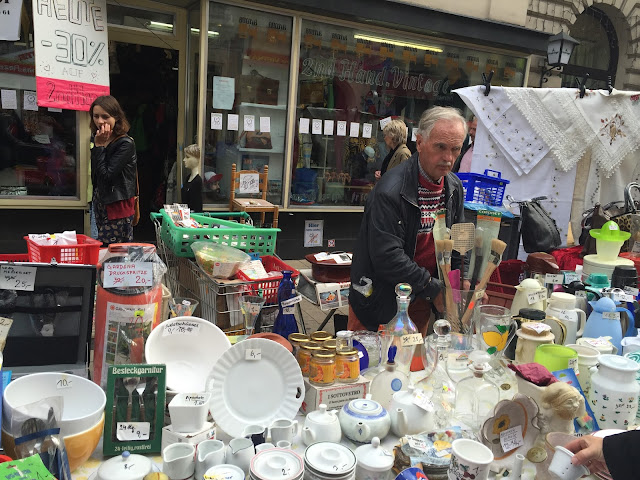 Some tables were laid out so nicely, which made me wonder what it would be like to pack it all up at the end of the day, only to get it back out the next morning since it's a 2-day sale! 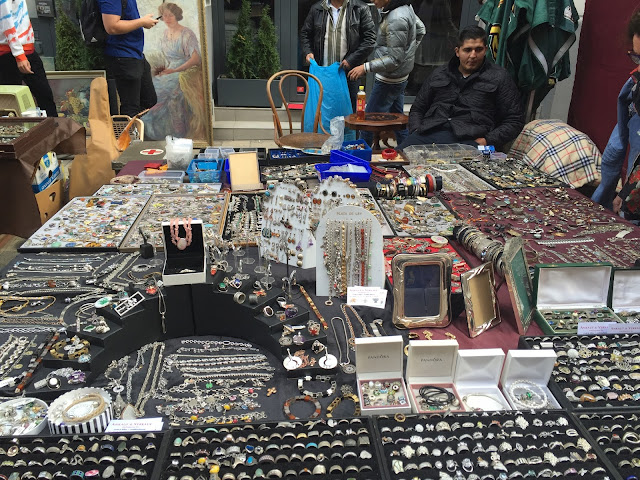 While some tables concentrated on one theme, such as jewelry, others were a mish mash of things. I'm not sure if it's helpful to come to the sale with an idea in mind of what you want, or just look at it all and hope something jumps out at you as special! 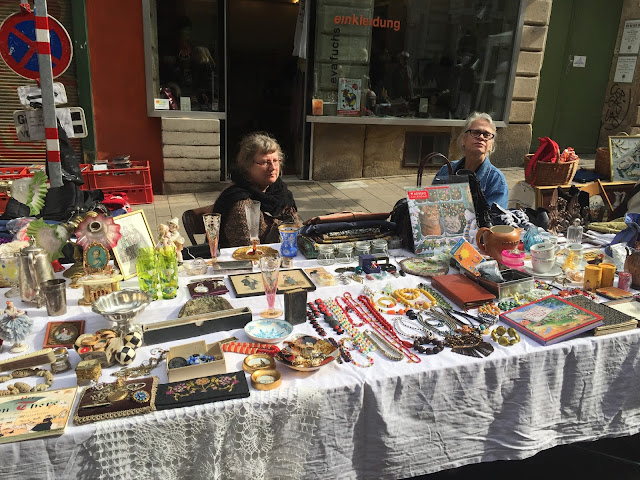 Anyone for a mobile phone?? 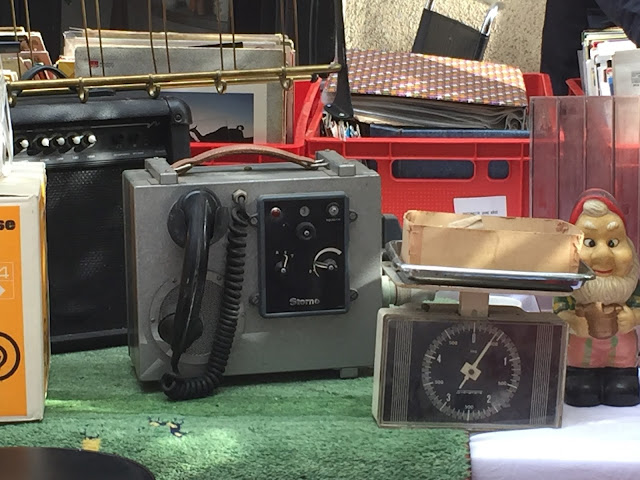 Honestly, I mostly enjoyed watching the vendors as they chatted with friends and neighbors (or at least it appeared that way), while people perused their wares. 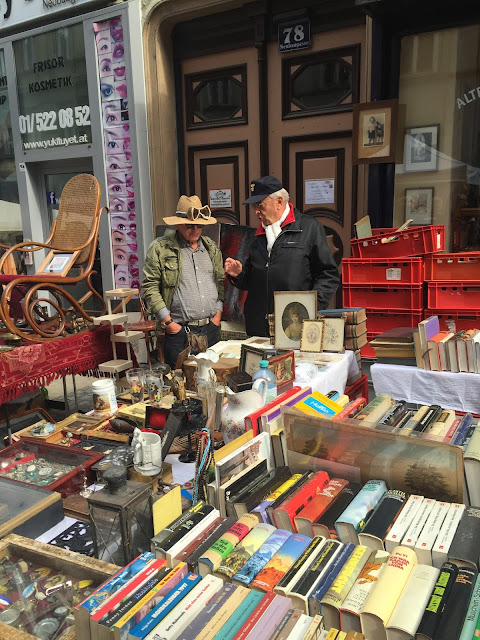 Dave had fun looking at old binoculars as we made our way down the long street. 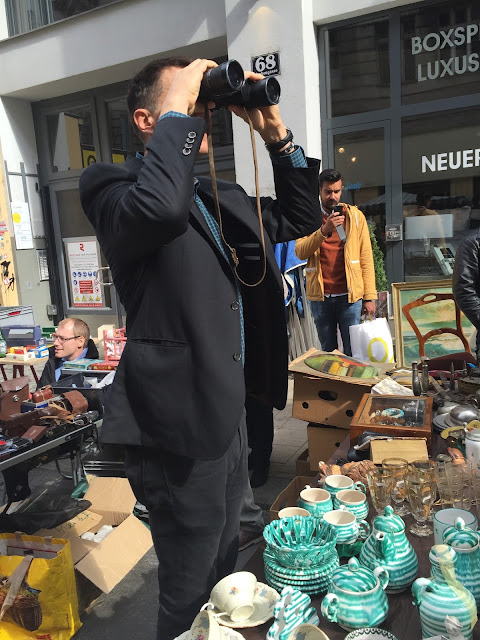 This particular display made me laugh as I'd had a conversation with Claire recently about how to carry groceries back home if you don't have a car. Here are several possibilities for you Claire! 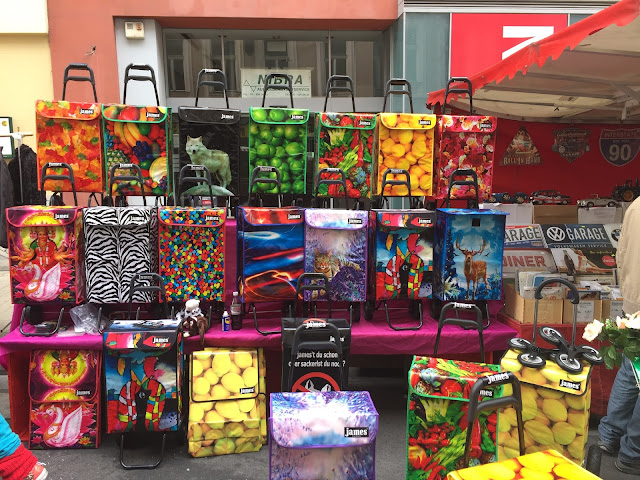 There was certainly no shortage of vinyl record albums. I wonder how many people still have a record player in their home?? 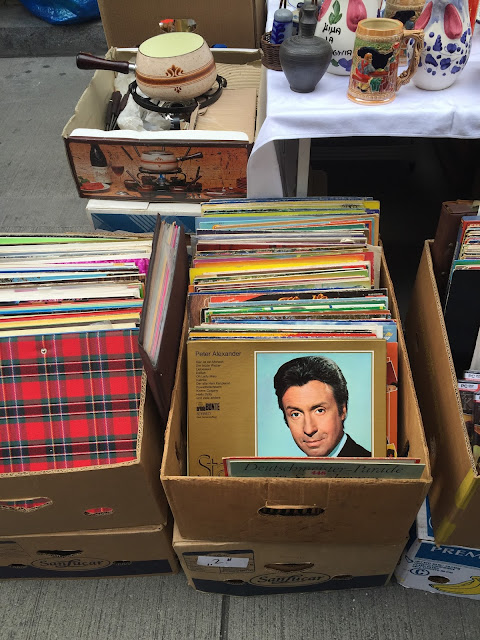 We stopped here to look at a few beautiful bronze statues, though quickly moved on when we found the asking price to be around 400 Euros! 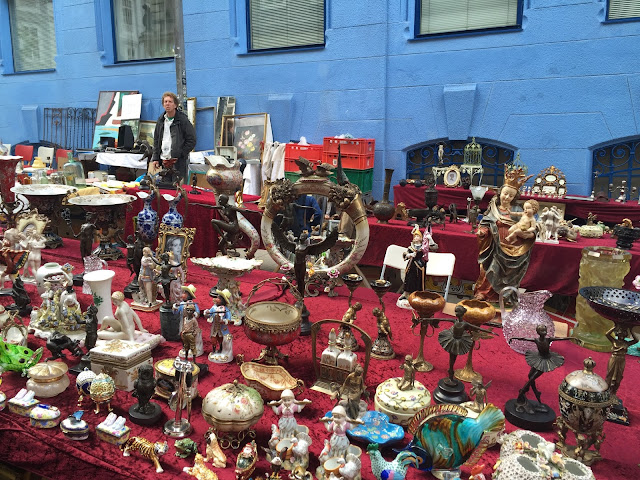 After nearly two hours on Neubaugasse, we came to the end without having made one purchase!

But we sure had a lot of fun enjoying the neighborly atmosphere and people of Vienna! 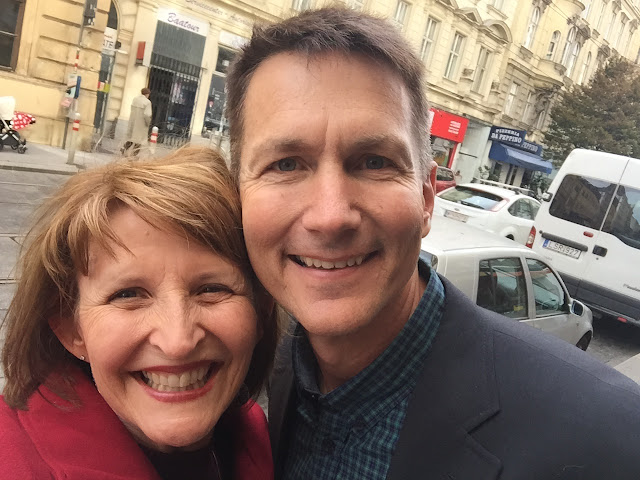