Racing to Another City

This morning dawned bright and beautiful here in Prague, despite the forecast otherwise! 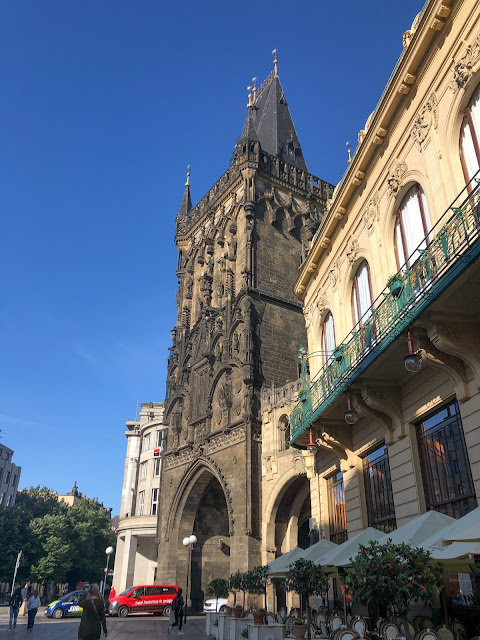 Claire and I didn't have to be at our station until later on in the day, so we headed out towards Václavské náměstí, or otherwise known as Wenceslas Square. 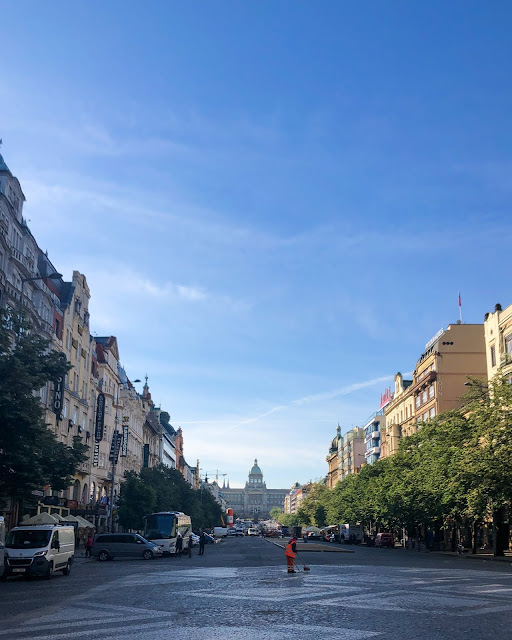 With the city just waking up, it was fairly quiet there.

Except for 100 interns making their way to the top of the square with balloons between them! 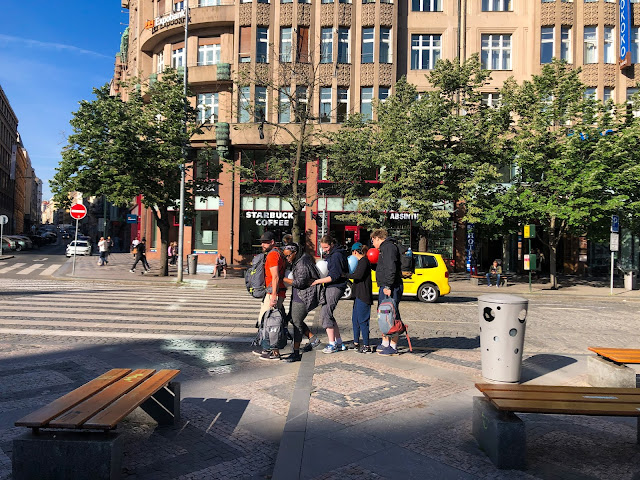 This challenge was designed for teamwork, as they had to hold a balloon between them, carry all of their belongings with them, and head to the top of the square without losing a balloon! If they lost one (it slipped out) or it broke, they had to come all the way back to the beginning and start over. 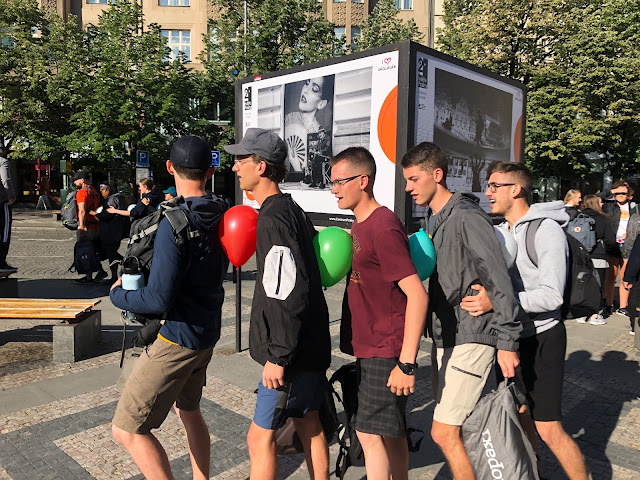 What a way to see the most famous street in Prague! 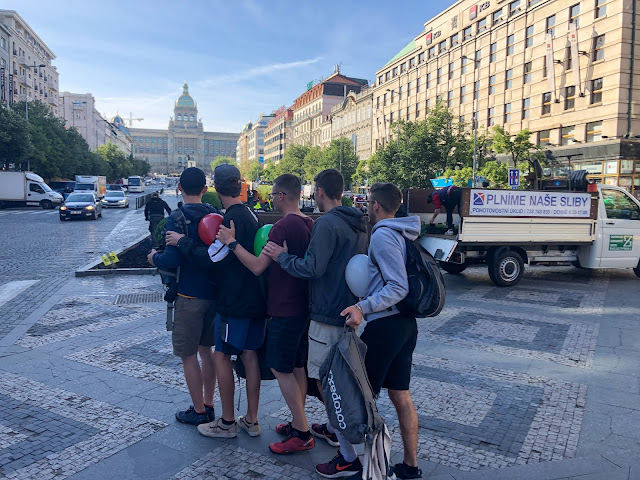 And what a gorgeous morning!! 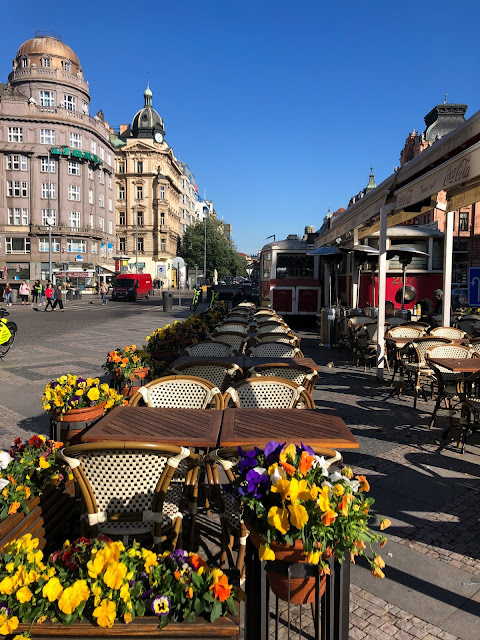 What the interns didn't know at that point was that later in the day they would get a clue that would send them on to another city here in the Czech Republic!

Because Claire's and my next station was in that city, we headed to the train station to head there. 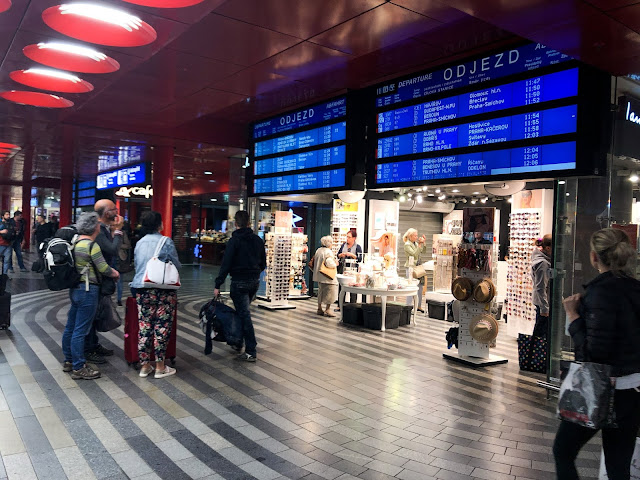 With no explanation of why, we ended up being on the train for an extra hour, making a two hour ride a three hour ride. 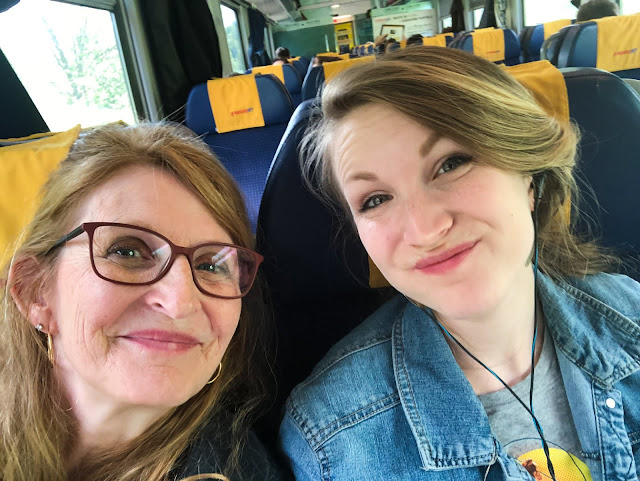 But we were pretty sure we were beating any intern teams there, so were safe in arriving later than expected. 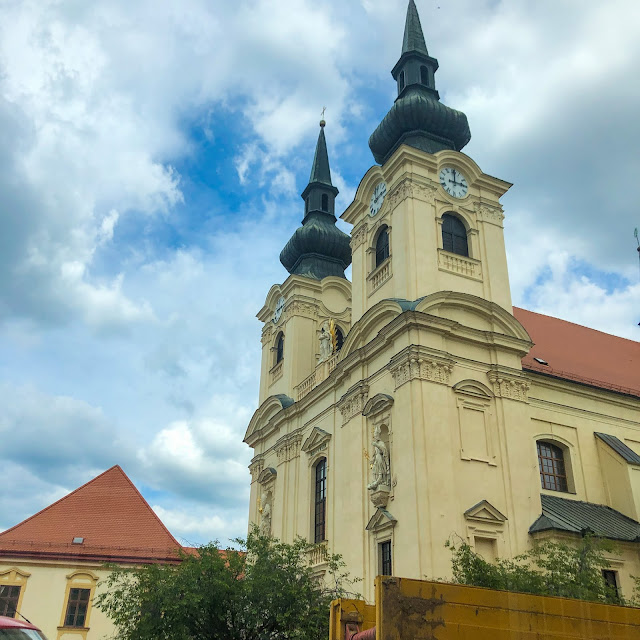 What we didn't count on was how torn up the city of Brno is! We had to get off at a different train station than the main one, and then find our way into the city. You'd think this wouldn't be hard since we speak Czech, but it proved to be difficult. We were literally "over the river and through the woods" trying to find our way! 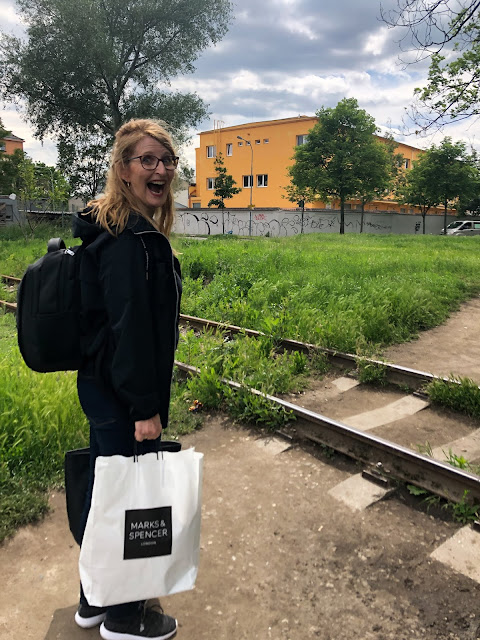 We kept speculating how the interns would find their way, if we were having a hard time! 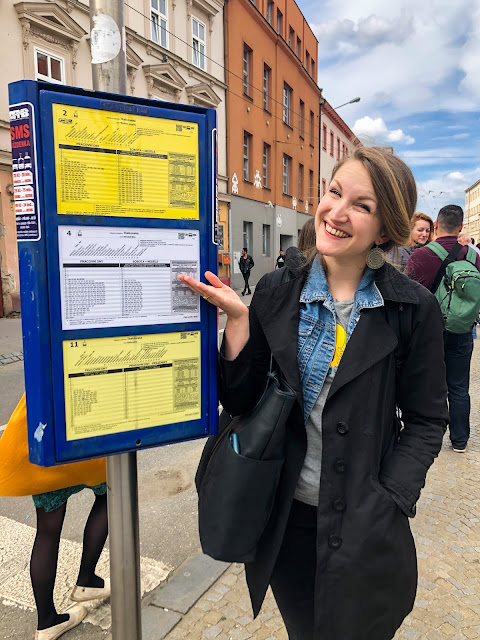 After getting on a bus going the wrong way, we walked for a half hour, took another bus, walked again, and finally reached our destination of the farmer's market downtown Brno! 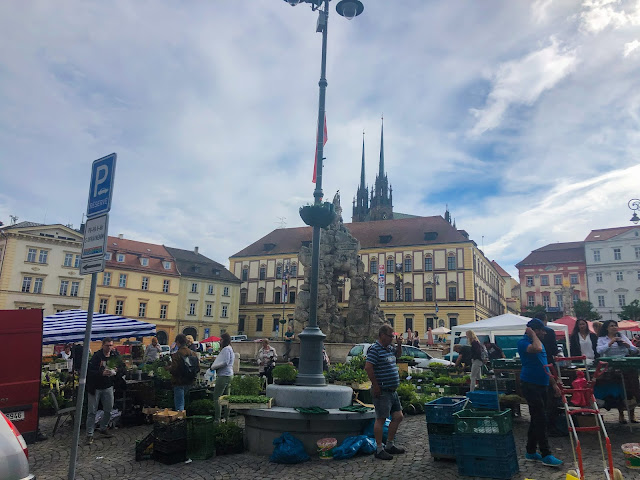 We were here to man the last station of the day: an hour of prayer in the JV Prayer Room! 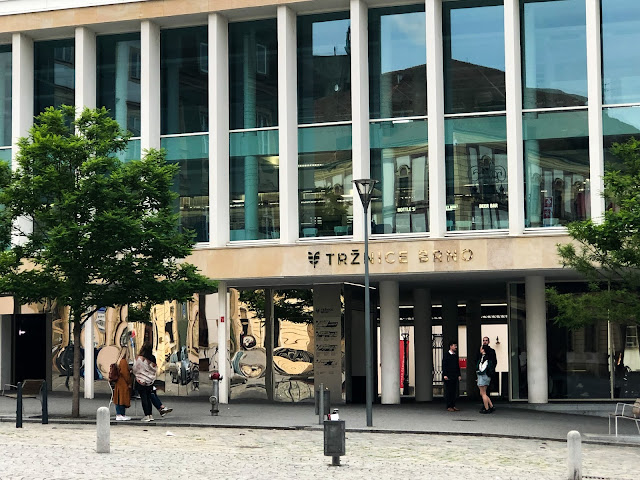 For a while we sat on the steps of the building, watching people go by and wondering when our first team would arrive. 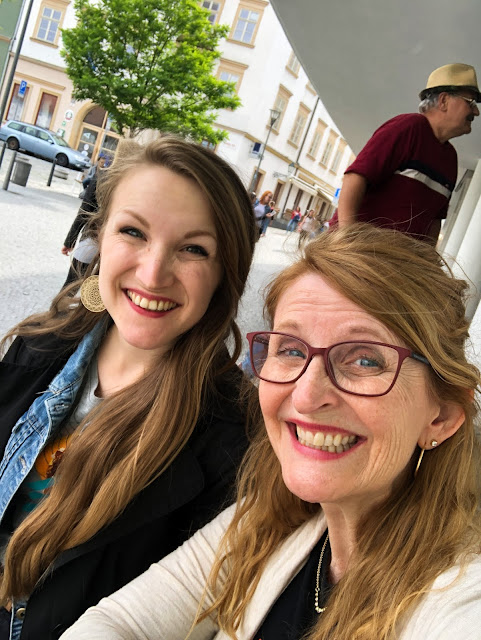 Eventually a bench was freed up so we didn't have to sit on cold cement, and so we would be highly visible when teams started arriving!

These two teams came running in first around 5 PM, within just minutes of each other!


They had a choice about how they could spend their hour of prayer. They could go online, if they had data, and pray in the actual JV Prayer Room. Or they could pray using a sheet that I'd prepared that led them through something like an hour in the Prayer Room. 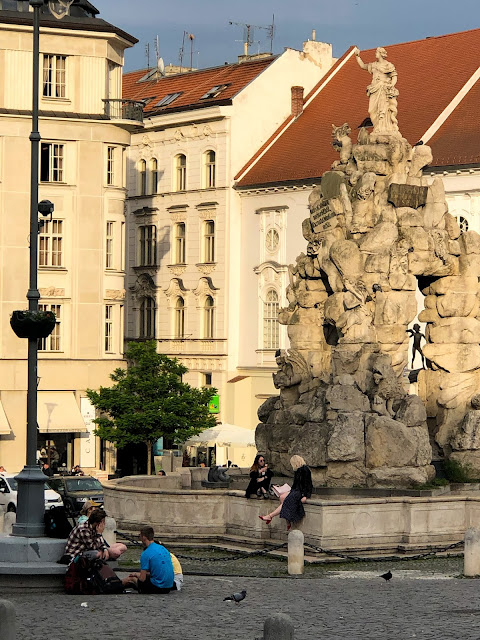 HOW I loved watching these teams spread out in the square in front of us and begin to pray! 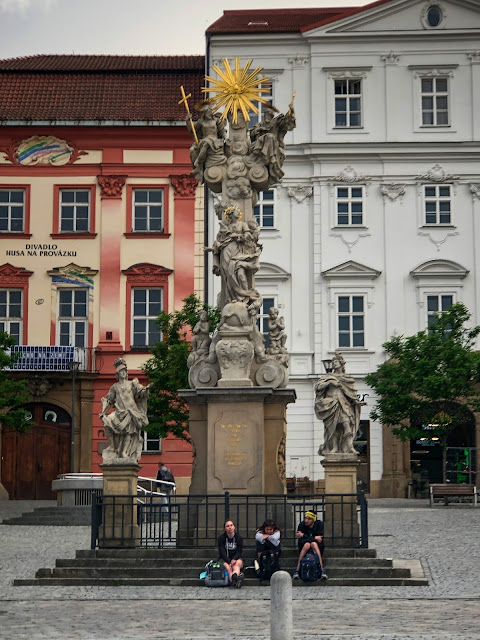 As more teams began to arrive, our teammate, Denny came to be with us too. She's been in charge of all the housing arrangements, and many other details, for the Amazing Race. We posed for a nice picture together... 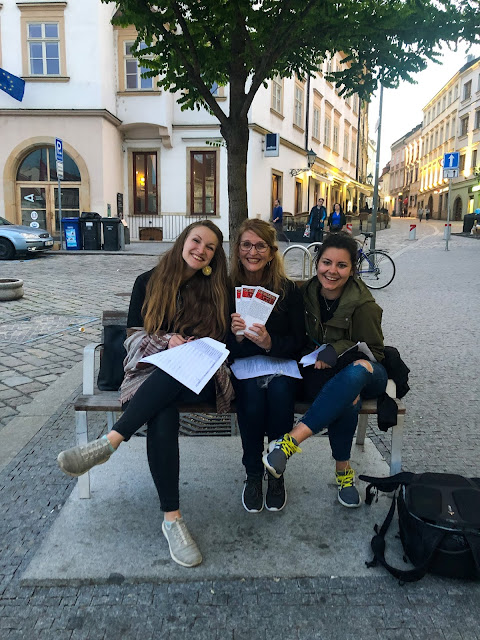 But here is the actual reality! 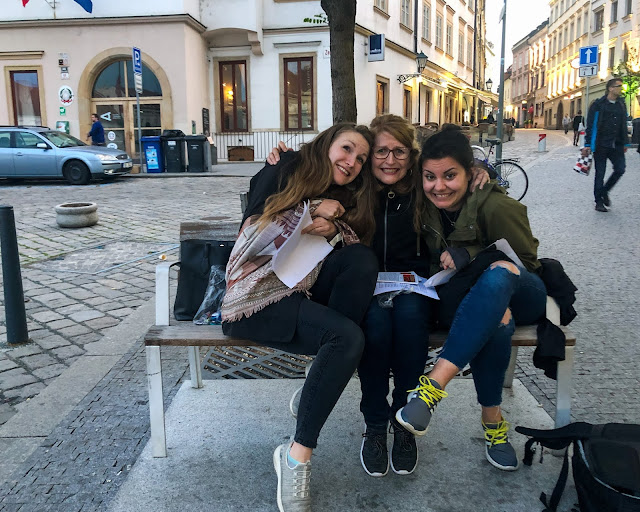 It was 9 PM and SO chilly as the night air began to settle in.

Not long after this another one of our JV teammates sent me a text and asked if there was anything we needed. I jokingly (kind of!) said a blanket, to which she replied she'd see what she could do. 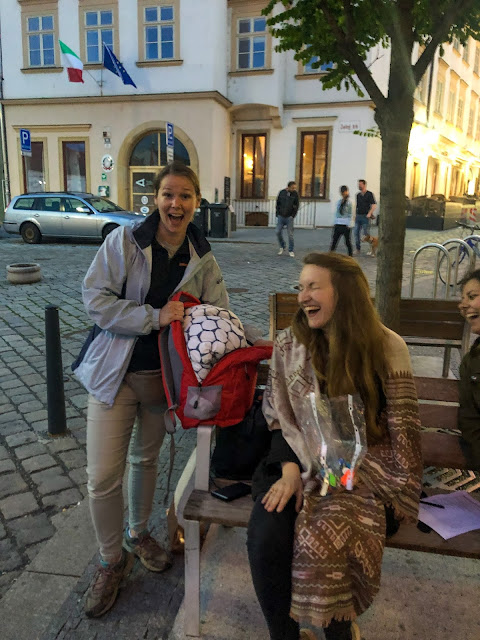 Dear Kelly brought us one, stuffed into her backpack! It was literally the blanket off her bed at the hostel where we're staying tonight!

It made ALL the difference as we continued to wait for teams to arrive and pray. 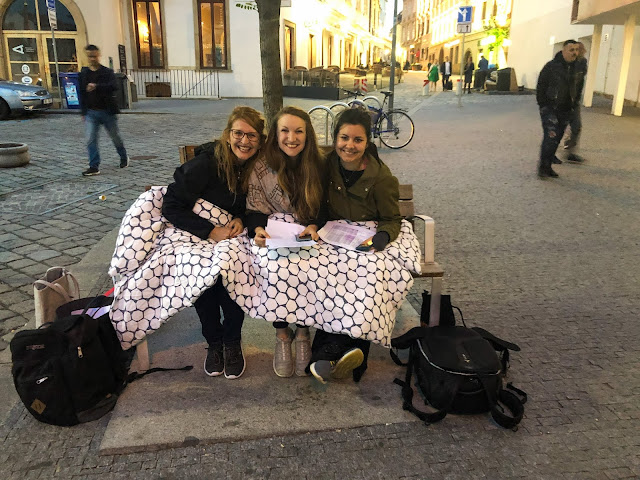 At 10:15 the decision was made that any teams who arrived at that point had to get in their hour of prayer before the beginning of the race in the morning, rather than making them (and us!) stay outside even later.

But the last team had arrived just a few minutes before the decision was made, so we waited for them to finish their hour of prayer in the empty square. 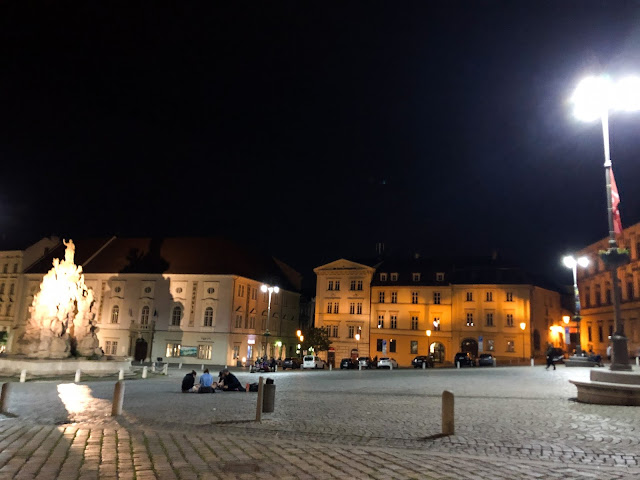 Rachael and Zuzi came to join us for the last hour, or so, which was so nice of them! We had such a fun time ending the day together at the prayer station! 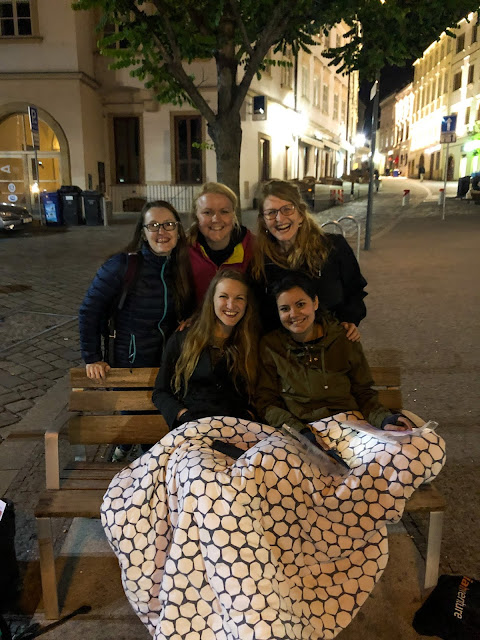 It was midnight when we got settled into our rooms, and morning will come early for our last day of the race. But I wouldn't have traded being at this station for anything.

Over 100 hours of prayer were invested tonight into asking for God's Kingdom to advance in Central and Eastern Europe. I can't wait to see how God answers those prayers, and the fruit that comes from them!
Posted by Living By Lysa at 11:50 PM