State of the Venture

Every year there's a favorite session of Dave's at JV spring conference. 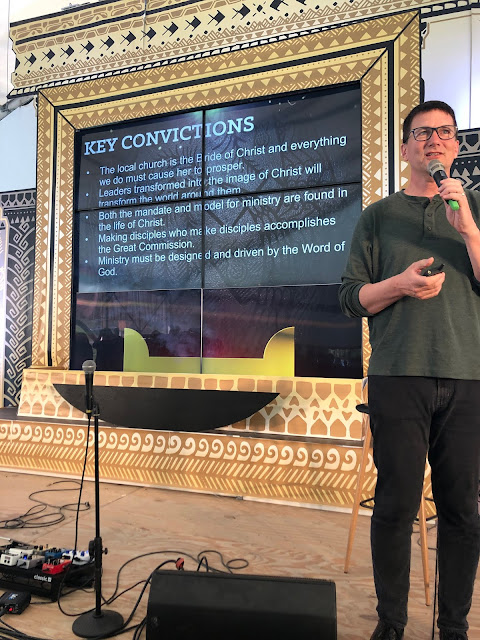 It's his time to give an overall update on the state of Josiah Venture, and where we're at in our vision, mission and goals. 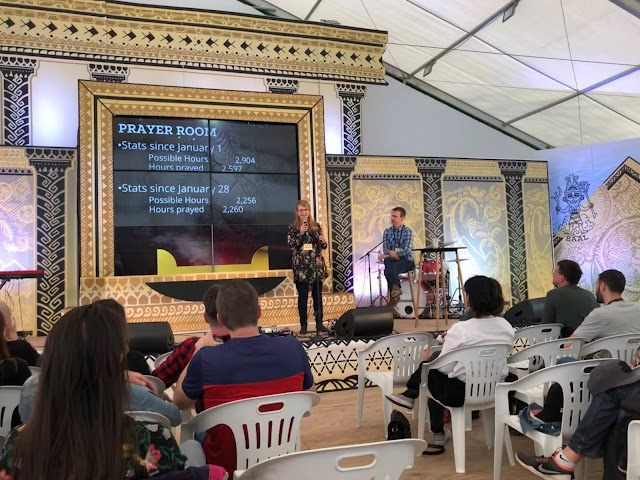 I had the joy of giving this part of the update, sharing where we're at in our JV Prayer Room hours this year, which reflect a change after our challenge at Winter Academy, thus the stats after January 28th, which we're encouraged by!

After finishing some other updates, Dave moved on to another favorite of his: honoring people for their length of service! 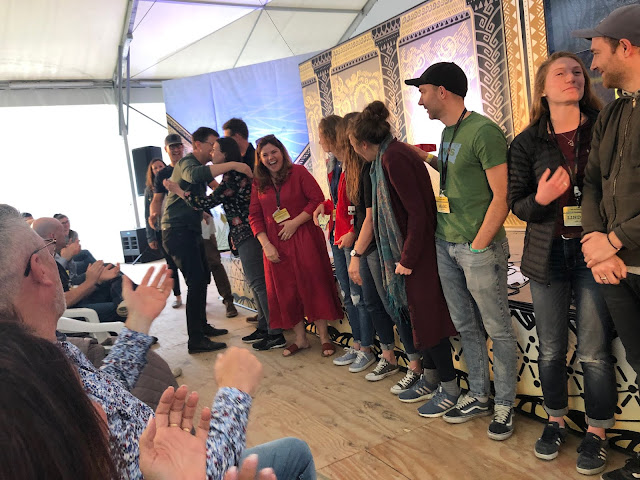 This group has served with us for five years now, ministering in Croatia, Bulgaria, Ukraine, Czech, and Hungary!

Next up were those who've been with us for ten years!! Both of these couples, the Jenkins and Wynn's, live and serve in Slovenia. 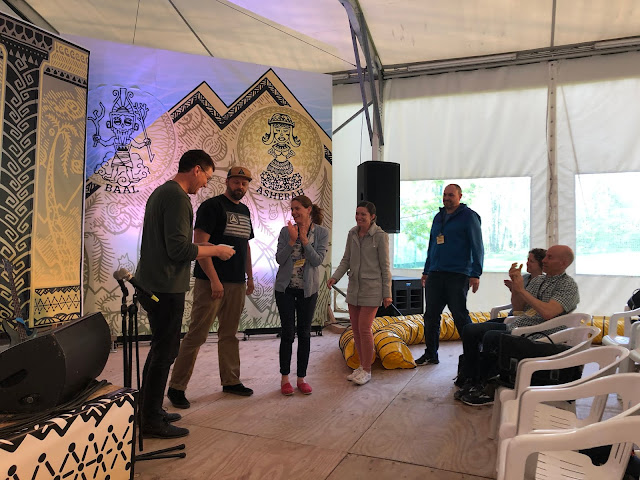 Amazingly, we also have three couples to honor this year for FIFTEEN years of service with JV! 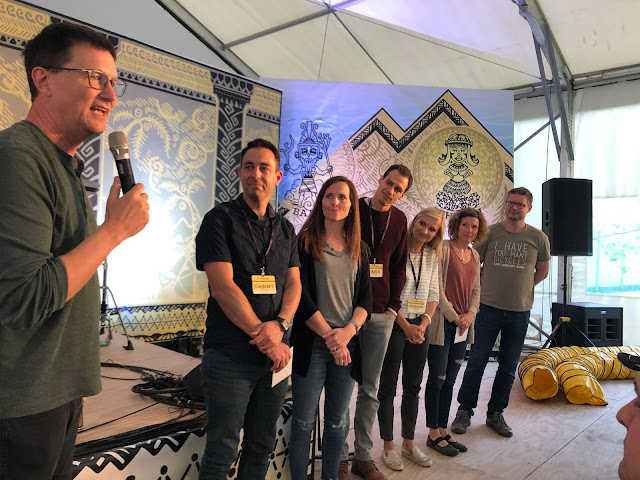 The Stephens and Bordners serve in Slovenia, while the Bozon's serve here in Czech.

Next was a 20 year award to one awesome person! 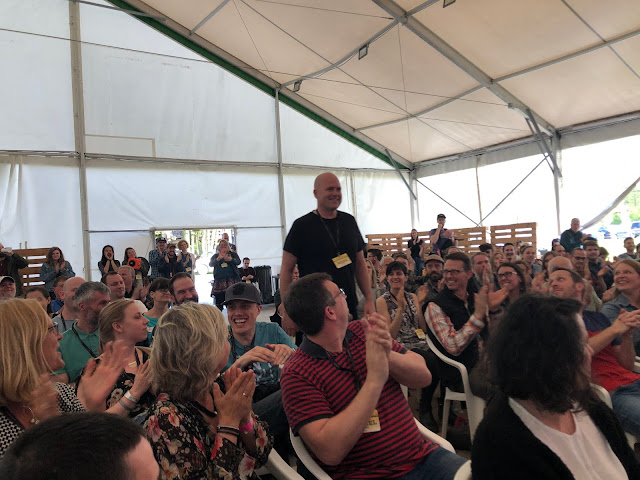 Mark Krupa has been in Czech, serving so faithfully and fruitfully all these years! 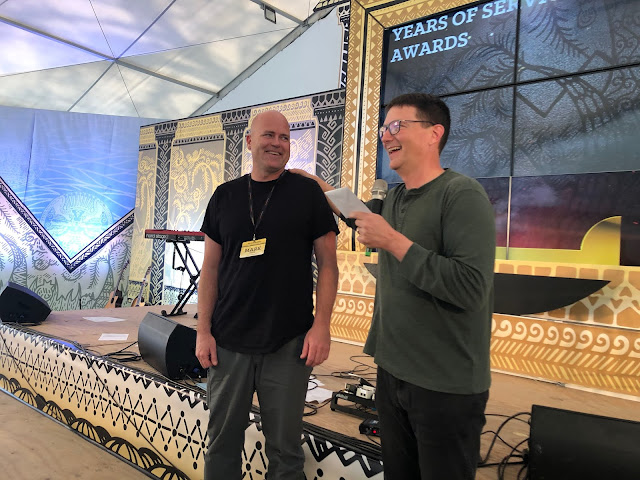 Finally, there was a 25 year award to our dear Hash's. 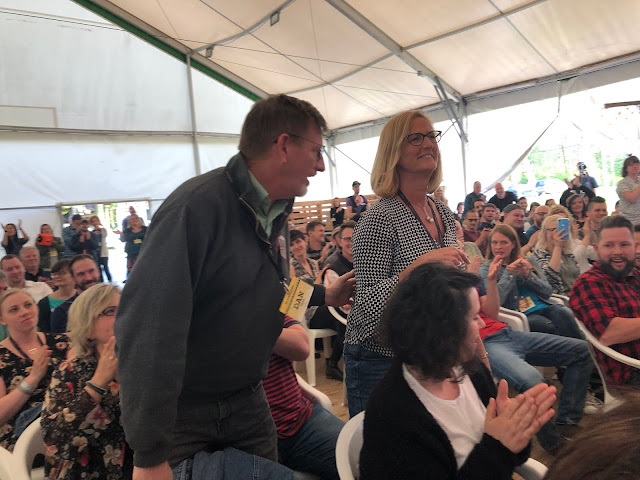 While we celebrated JV's 25th anniversary last September at our fall conference, our actual anniversary wasn't until November; this meant the award for years of service didn't come until this conference. 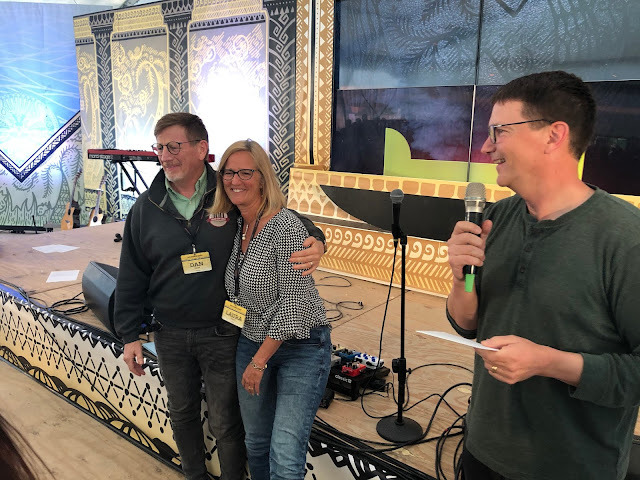 It was so precious to see the JV family honor Dan and Laura for their 25 years of service in Poland for and with the JV team. 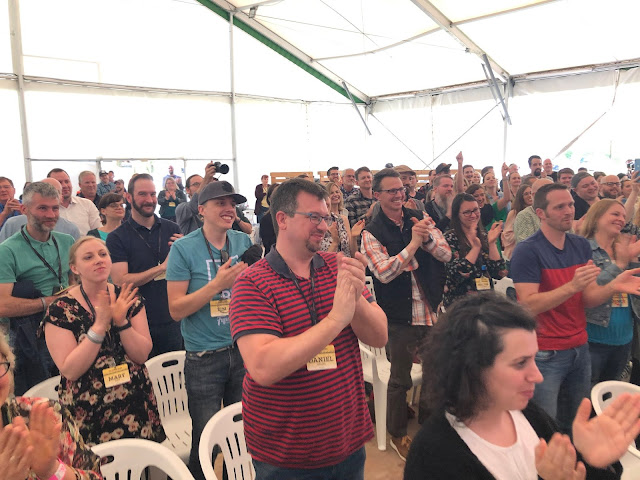 Our years of friendship with the Hash's goes even beyond this award for years of service. Dave and Dan have been in life with each other for over 50 years, while Laura and I have been serving together for 35 years. What a privilege to share that much life with them! 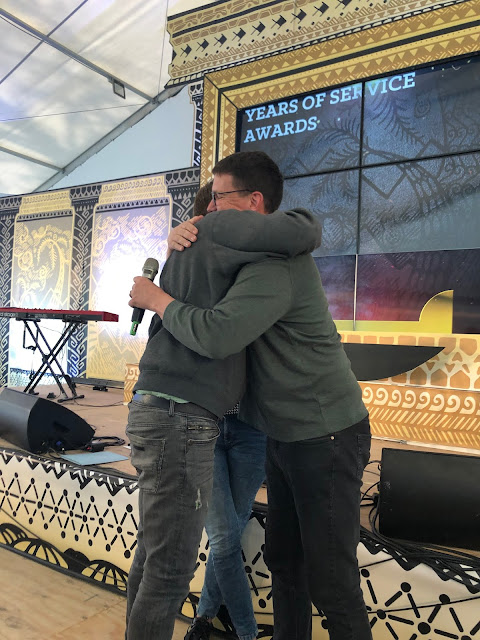 As soon as Dave finished the length of service awards, Mel grabbed the mic from him and asked me to come up and join Dave. 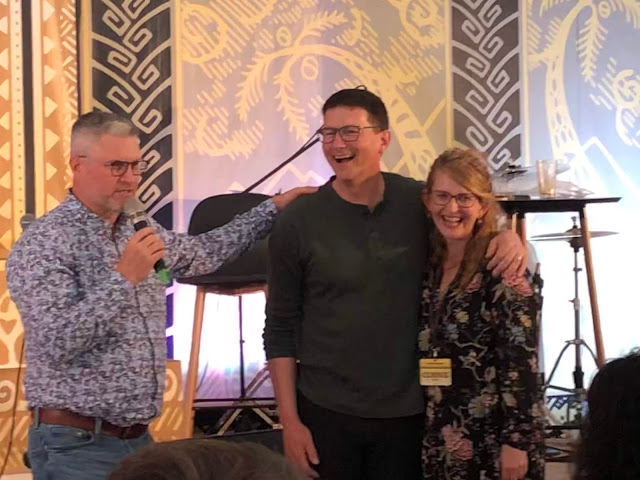 The same warm honor from our team choked me up as we too celebrated our 25 year anniversary of serving on this team. 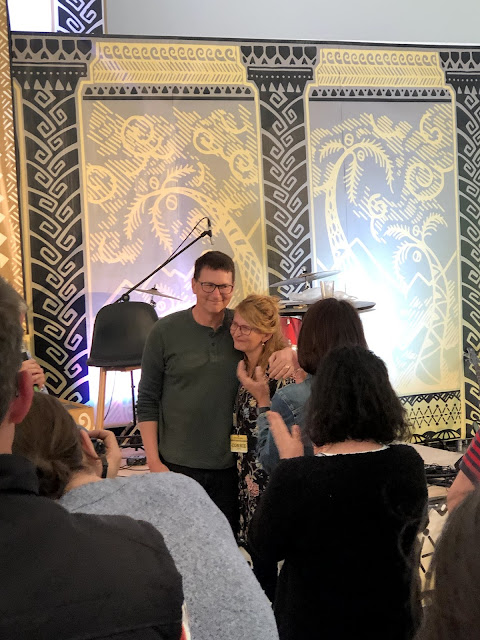 On one hand it feels like much more than that...and on the other hand, I remember the day we drove into Czech as if it was yesterday! How awesome it's been, serving God here and watching Him do such amazing things across this region.

Our JV board chairman is here for conference this week so came up to do the presentation, bringing joy and laughter to the moment. 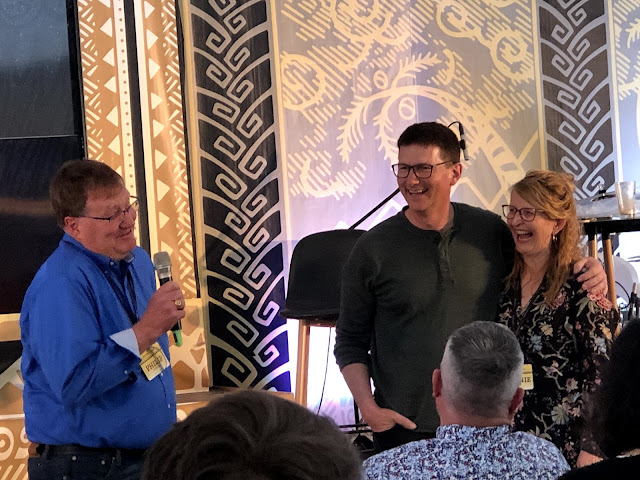 We give God all the glory and honor for these twenty five years, and pray that this is just the beginning of his work to change lives here in this region of the world.

Dave stayed up front after that to give his final awards to those who have been recommended by their country leaders for recognition of their service in this past year.

Dave and his executive team compile all the nominations and then make their decisions...like this one to Stephanie and Brooke from the Slovenia team for the "Equipping Young Leaders" award! 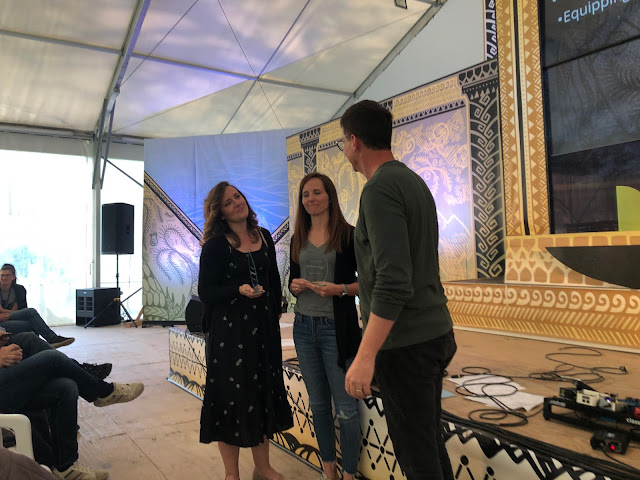 And to Kecia, the "God-honoring excellence" award for her service in Hungary. 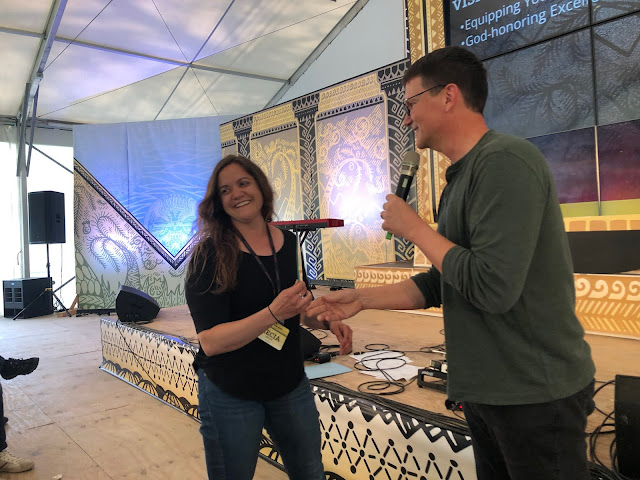 Ben and Kristy were nominated by their fellow country leaders for the "Movement of God" award for their leadership and ministry in Ukraine. 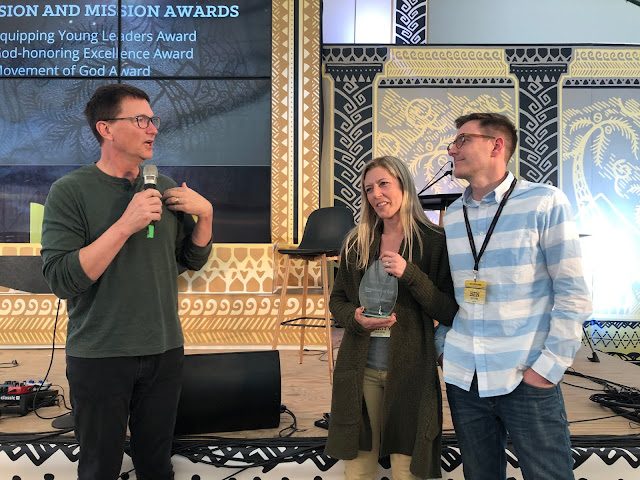 And Evan and Bronwyn were given a "Home in the Local Church" award for their steadfastness in serving their local church in Croatia. 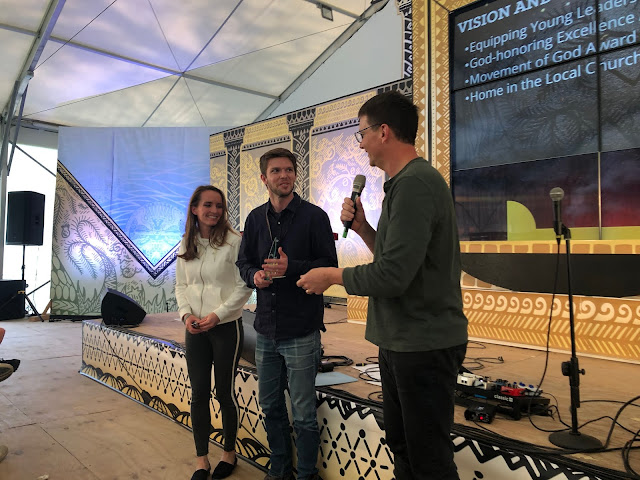 The last award, called the "Empowerment Award" was given to Rachael, our Camps Director. 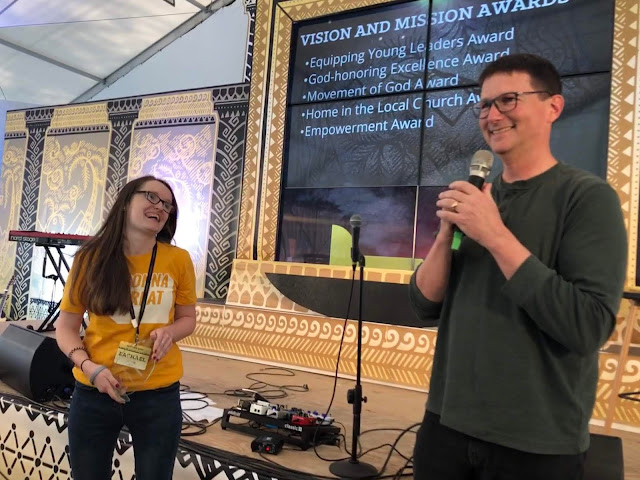 As Dave always says, any number of our team could be recognized for their faithfulness, service, attitudes, perseverance, excellence and faith that keeps them here obediently following the Lord. But it's nice to notice and honor different ones each year, to encourage all of us that we're in this together, praying for a movement of God across this region.

So thankful for our JV team!
Posted by Living By Lysa at 6:00 PM