We woke up to another beautiful day for the Amazing Race with our summer interns. How we are thanking the Lord for His change of weather these past few days! 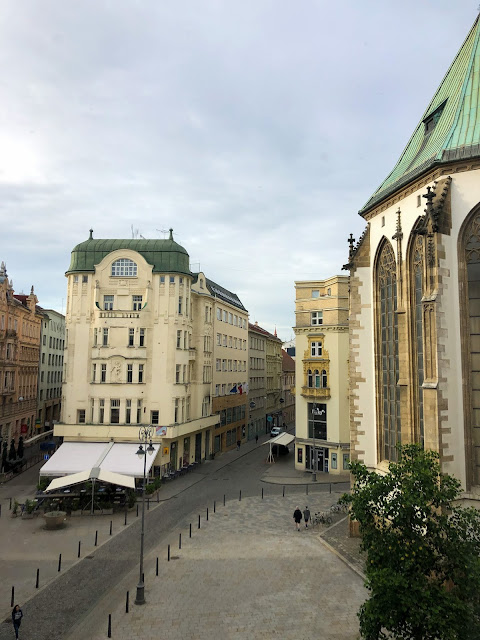 Last night teams were given starting times this morning, based on when they arrived at the last station yesterday. So while the first team was getting started at 8 this morning, the last one didn't start until nearly 10...which was good for them as they could catch up on a little sleep!

Claire and I arrived at our station in downtown Brno at 10 AM, along with our teammates Kelly and Wren. 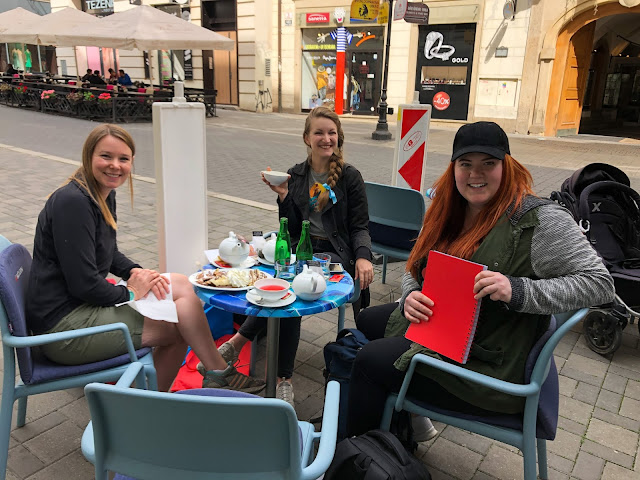 The task we get to lead today? Sending teams into the "Tiger" store where they have 150 Kc (approximately $6.50) to spend on game supplies. 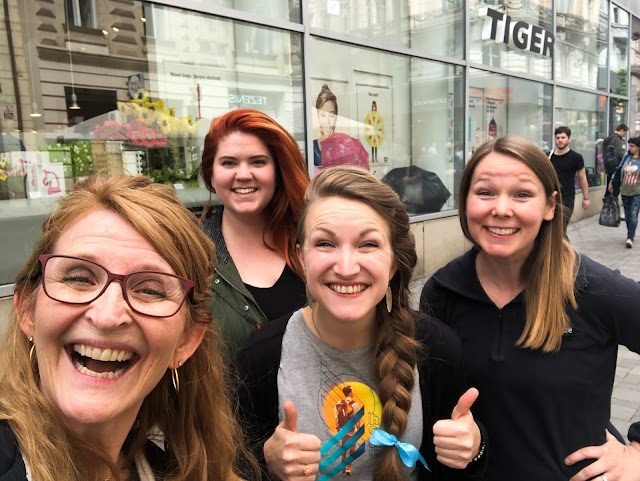 But the twist is, they can't buy a pre-made game! Instead they have to buy supplies for a game that they make up on the spot! 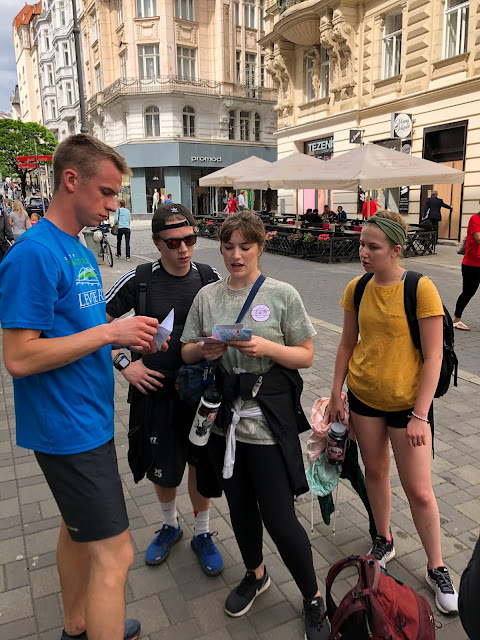 This task is designed to help them think quickly and creatively, with limited supplies, in anticipation of camps they'll be at this summer where they'll probably have to improvise on games at some point! 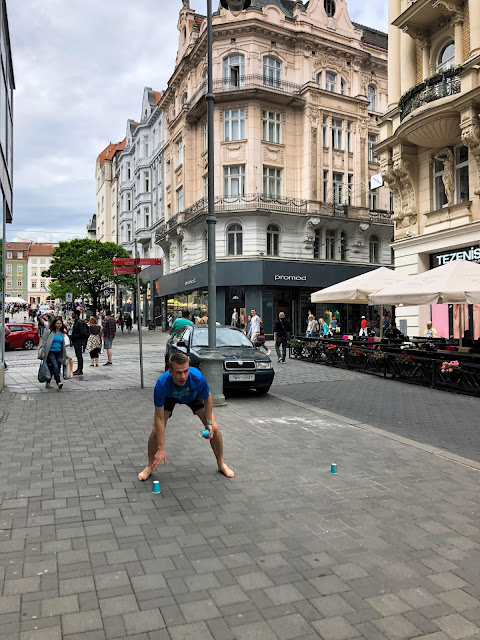 What absolute FUN it was watching 26 teams come up with 26 different games! 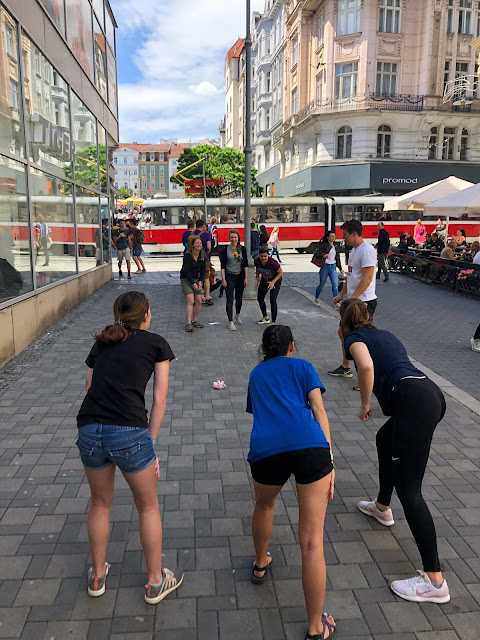 They bought an assortment of paper cups, balloons, pieces of paper, pipe cleaners, balls, and all sorts of other things in order to create their games. 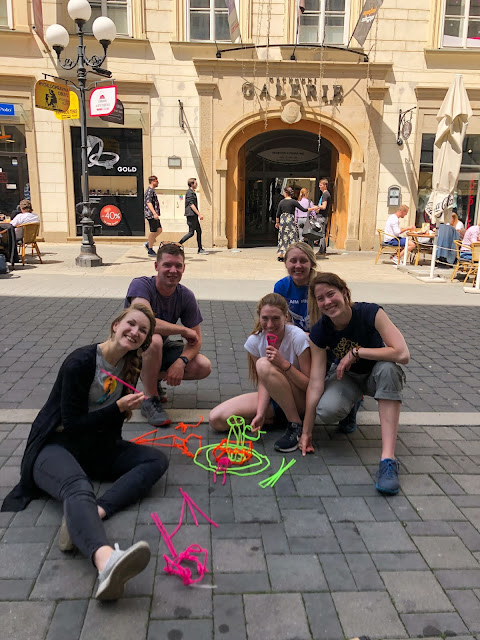 One of my favorites was an adaptation to the game "Pictionary" where you draw a picture and the person tries to guess the word you're drawing. This team used paper plates, balanced on your head, where you couldn't actually see what you were drawing! 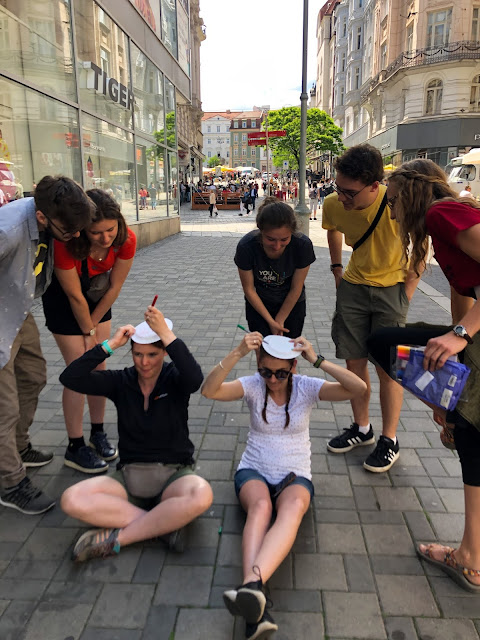 Caleb's Albania team had a creative game as well, and his teammates picked Claire to play it with her brother!


All of these games were played right out on the sidewalks where ordinary people were passing by all day! 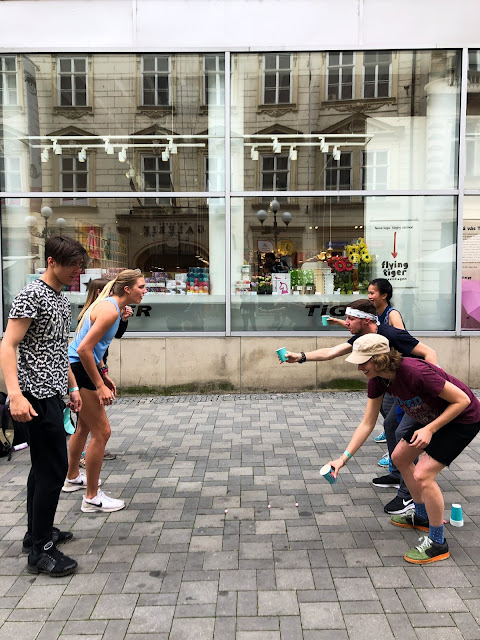 We had a couple people actually stop and ask if they could play, to which we said, "Of course!"

Our first team had arrived somewhere just after 10, and our last time arrived at just after 4! 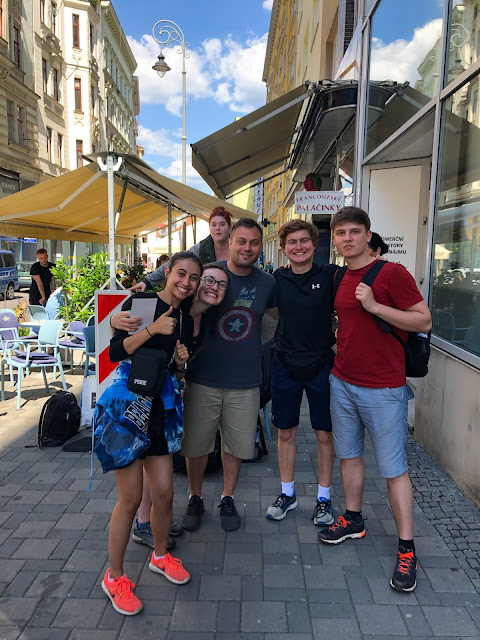 Even though they were in last place, they had THE BEST attitudes about it! They weren't in the race to win it, but rather to have a good time bonding as an intern team.

I happened to know one of the interns on this particular team! 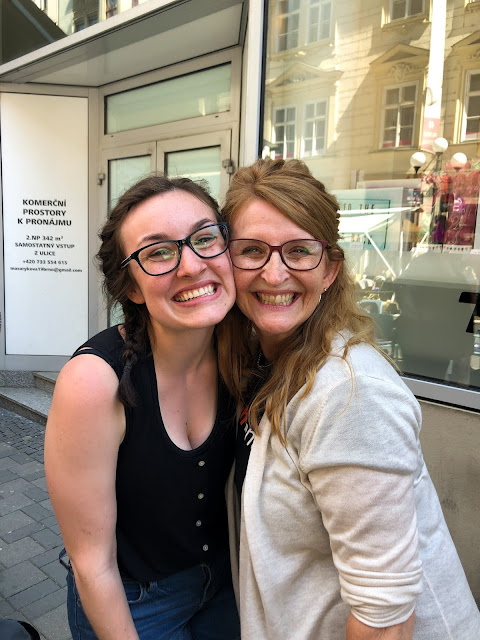 She is from Dave's home church in Denver, where he grew up going with his parents, and siblings. His mom, dad, sister and her family still attend there! Shelby has been in a young adult class that Joyce and David have been teaching for many years so it's really special to have her here serving with us this summer.

Once the last team left, headed for the finish line in Frydlant, a 3 hour train ride away, the four of us packed up our things and began to make our own way to the train station. 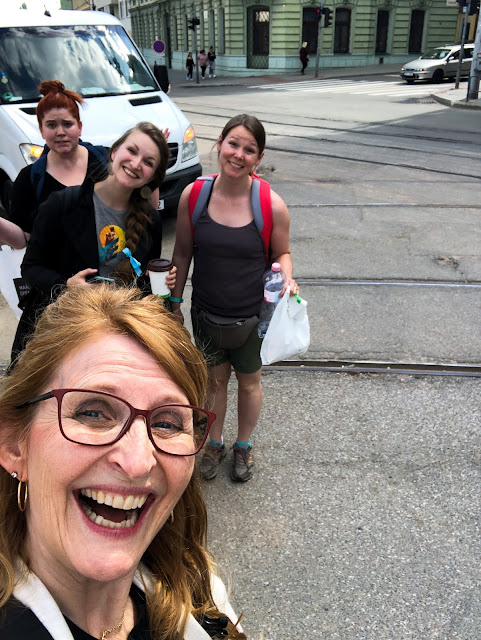 Kelly and I had left cars in Ostrava so we didn't have as far to go as the interns did, so our Amazing Race ended here in the parking lot of Ostrava Svinov! 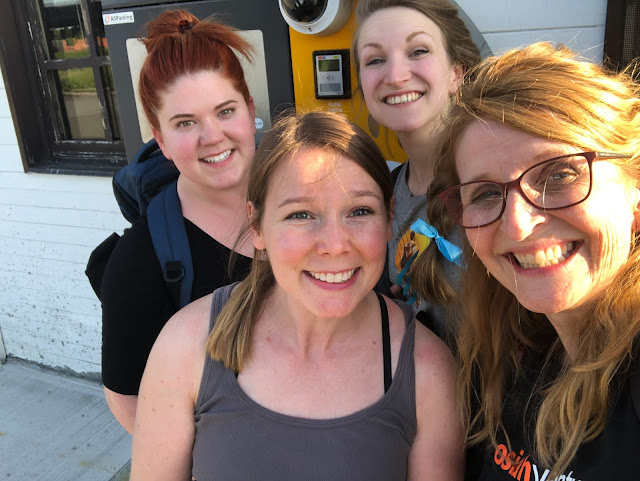 What an incredibly special three days it was, serving together with these amazing JV teammates of ours!

Many of our teammates will head to intern training up at the hotel for the next five days, and then will return to their countries and begin their summer of camps. This tool is a key part of our ministry as the Gospel will be shared with over 7000 students this summer.

Pray for our interns, to have bold faith and open hearts towards the young people they'll be in contact with at camps. Pray for the students, that they'll come ready for God's work in their hearts!
Posted by Living By Lysa at 10:00 PM