Six weeks ago, just before the COVID-19 virus came to Czech, we started a renovation project in the apartment over our garage, to solve a water damage issue in the bathroom. 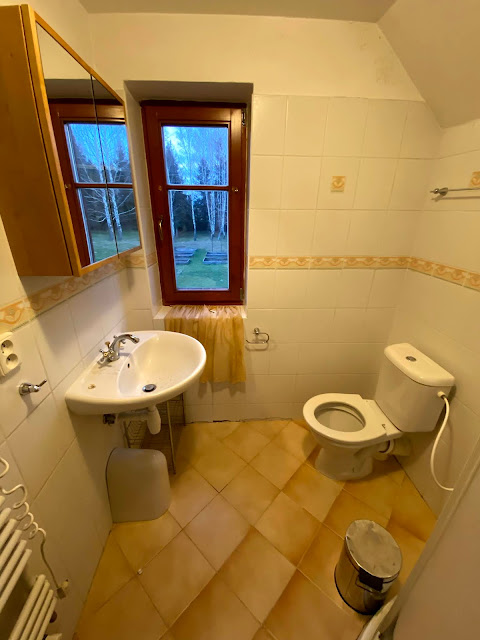 A leaky shower led to a total demolition of this room to solve multiple problems that we'd discovered. 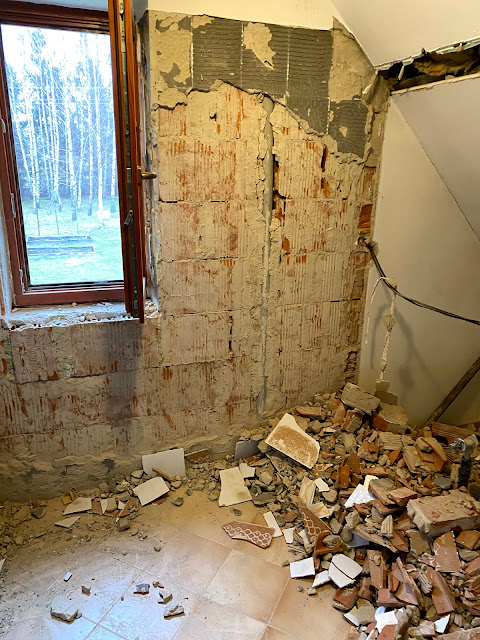 Behind the wall in the bathroom, was a hot water boiler that was now obsolete, due to the replacement of our heating system, which had been troublesome for most of the sixteen years we've lived here.

So it came out, and the wall came down, making more space in what had been a very small bathroom. 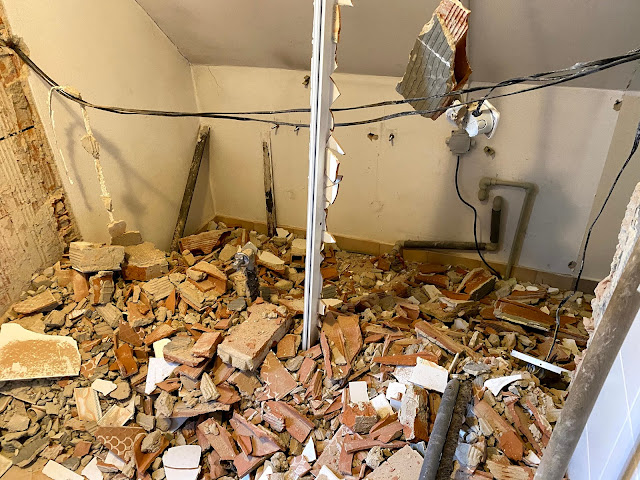 Floor heating that had been put in sixteen years ago when the house was built, never worked - who knows why! So the floor was dug up and new pipes were put in. 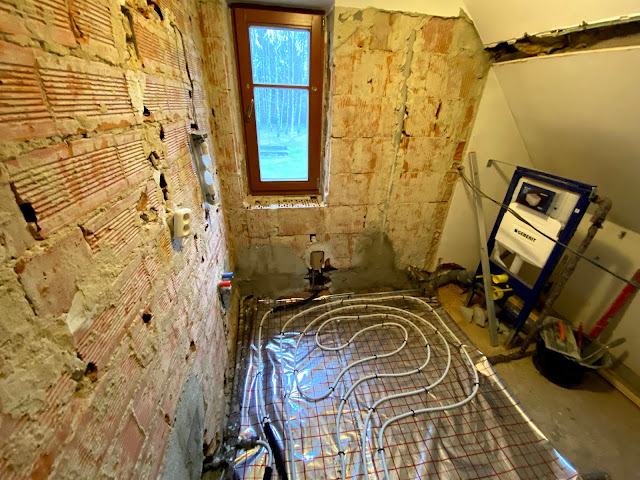 The walls were stripped of the tiles, and new plumbing put in with an updated toilet...and a bathtub was added to replace the tiny shower. 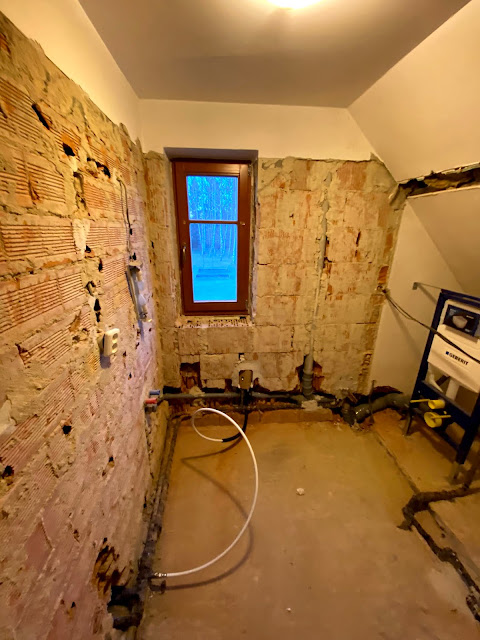 And voila! Here's the finished product of weeks of work! 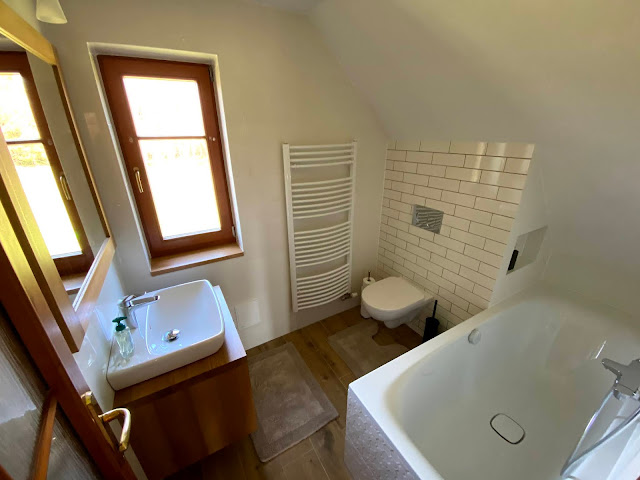 We're still waiting for a glass piece to be put around part of the bathtub, to make showering possible.  But for now, it's finished and ready for use.

The other part of the renovation project was new carpet throughout the apartment, paint in all of the rooms, a change in a few appliances, and new countertops. I wish I had a picture from when it was completely a mess in here, but this is the only one I've got (taken just after the loft went in up above, which was also new!). 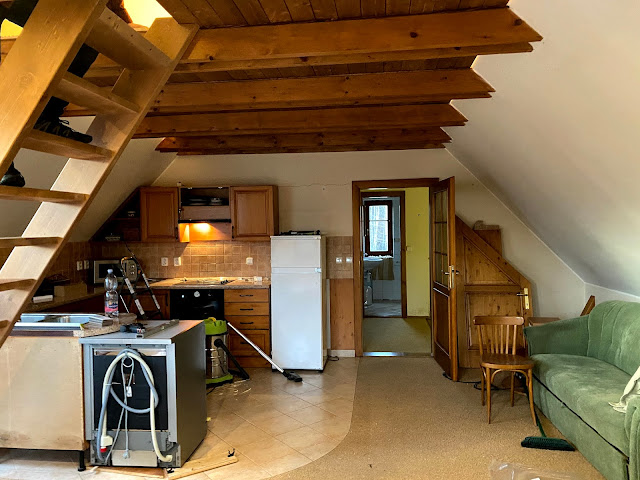 And here's the big reveal! 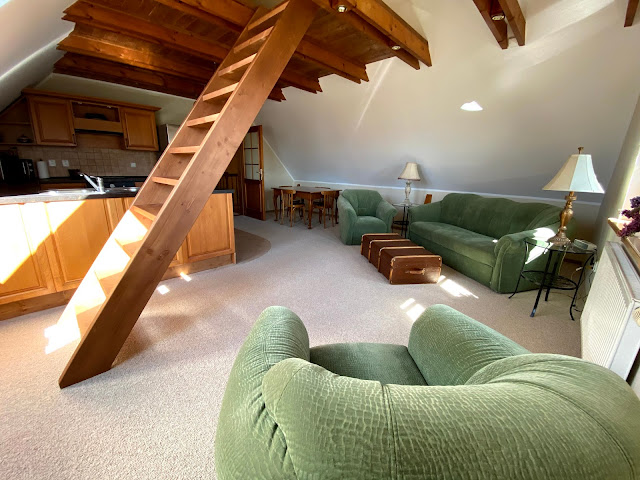 There are so many little touches that make this apartment beautiful and so much more cohesive!

A door that used to be on the built in refrigerator was repurposed for the back of the new dishwasher that's now on the end of the counter (previously there wasn't a dishwasher).

A table from Sweden that Dave and I found at an antique store shortly we were newly married, was reclaimed by Dave who did the work to bring it to life again. 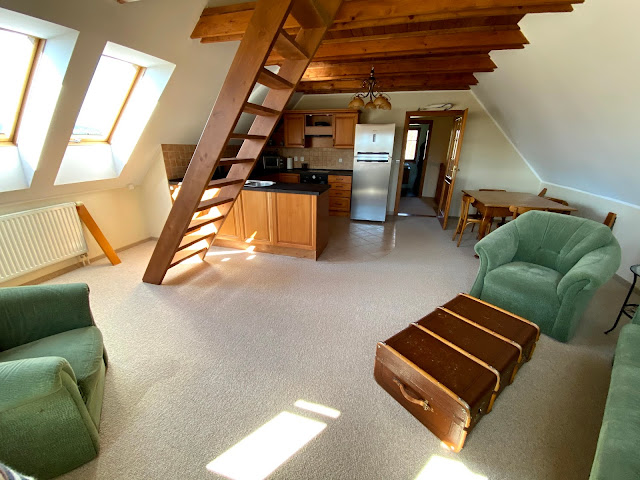 And lamps we've had since our Havirov days, that have been in storage, were brought back to life! 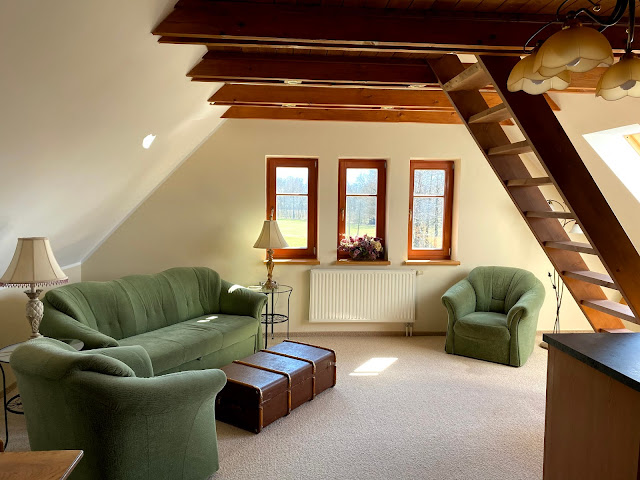 The crazy thing about this renovation is that no stores were open during this time because of the coronavirus, which made us get creative about how we put it all together!

We "shopped" in our own house, finding things we needed for the apartment that we could do without. Thankfully IKEA is still shipping so we were able to get new mattresses and pillows from there, and Mall.cz came through with appliances.

The day before all stores (except grocery, pharmacy and gas stations) were closed back in March, we had visited our local carpet store. Thankfully they were still able to order carpet for us, and even sent a crew to put it in. They not only replaced it out in the living area, but also in the bedroom, over what the family had put down during the 7 1/2 years they lived here. 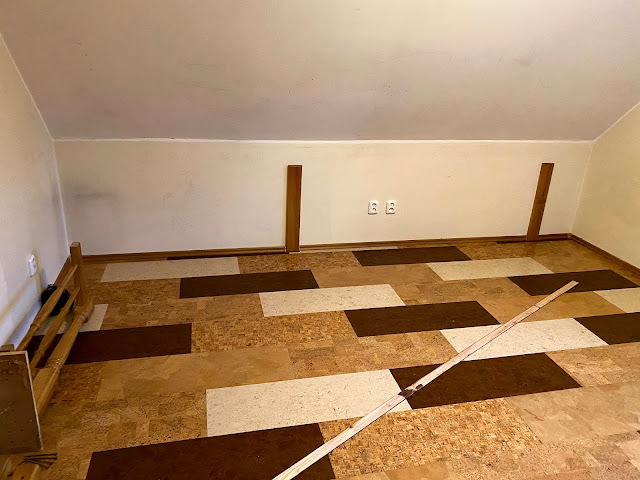 It looks so peaceful and welcoming in here now! 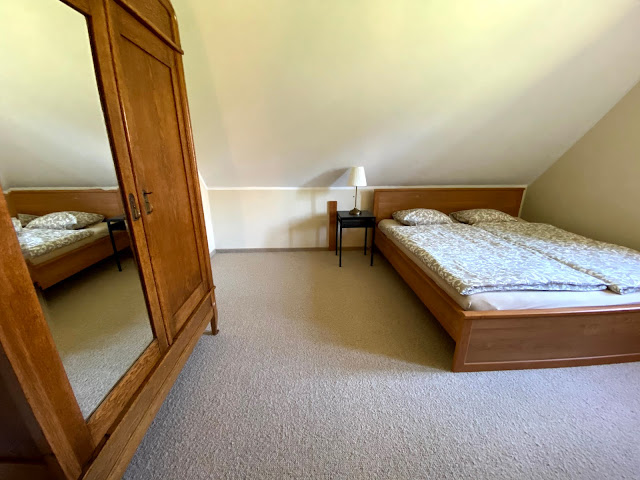 And all of this was done JUST IN TIME, for these two to move in! 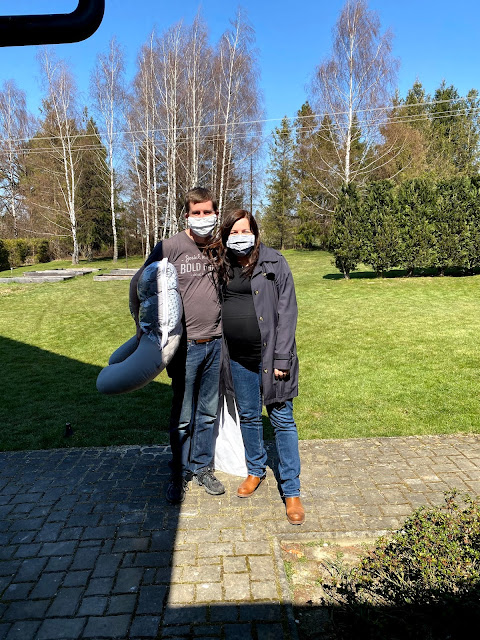 Dave and I have known Katka for 24 years! She trusted Christ at one of our first English camps, and was in our youth group in Havirov. I've been part of her life, as a spiritual mom, all these years, and love her like she's my daughter.

She married David, one of our JV missionaries in Latvia a couple years ago, and last September at our fall conference told me that she was pregnant...with TWINS! They planned to come to Czech to have the babies since Katka still has Czech health insurance here. She's not due until May, but because of the Coronavirus, they had to make a quick decision and drive here March 12th, just before the borders were closed.

They've been living at her parent's house, waiting for their Air BnB to open up so they could move in before the babies come. But, because of the virus, that fell through and they no longer had a place to live and bring the babies home to.

In God's sovereignty, despite the virus, we finished the apartment today and they were able to come and move in! 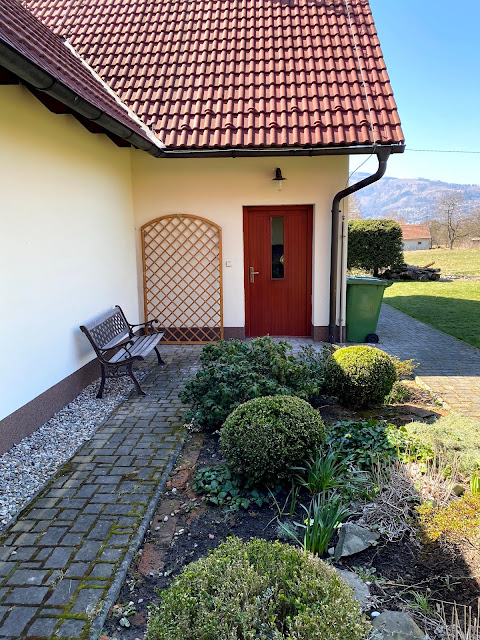 Katka is on strict bedrest by doctor's orders, so can't leave the apartment until it's time for the babies to arrive.

But now they have a little time to settle in, enjoy the quiet and tranquility of this place, and get ready for their lives to be turned upside down by the arrival of a little boy and a little girl sometime in the next four weeks!

I am so thrilled to have them here, and look forward to the day when they bring their twins home here! They'll stay until the babies are released to travel, but will also have to wait until the borders open up again for them to travel home to Latvia.

God KNEW that they would need this place, and thanks to the help of our good friend Petr who oversaw all the work, and the generosity of friends who made it financially possible, it was finished just in time!
Posted by Living By Lysa at 9:55 PM