I wished I had thought to take a picture this morning at our office building in Frydlant.

It was our first I-team meeting of the school year, and over twenty of our team were completely packed into the downstairs basement room where we meet each week. We were even missing at least four people so will have a challenge fitting in next week when we're there again!

Hearing about people's summers and all that God did was really wonderful. Projects were completed, support was raised, camps were led, people were ministered to...and so much more! We spent the morning sharing and then praying for all that's coming up in the month ahead. More on that later.

On my way back home I stopped to pick up our mail after being gone for two weeks, and found a slip for a registered letter waiting for me. This sent me back down into town to the post office to pick it up.

Want to know what was in the letter? 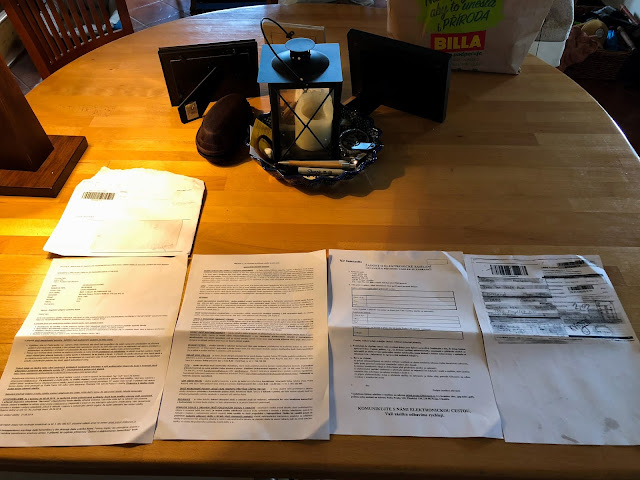 Four back and front pages, saying that a package for me is being held in customs in Prague.

All because it was $3.10 over the allowed amount for a package being sent into the European Union (allowed amount for the value of the package can only be 45 Euros, or $51.90 at the current exchange rate). 😭 😭 😭

I think by the time this is over, they will have spent at least $3.00 contacting me about this!

If I want to receive the package (which I do!), I have to fill out paperwork and send it back to Prague. They will then determine the amount of tax they'll charge me to receive this package, which is for my birthday from a dear friend in the States. 😢

Who knows how much they'll charge me, or when I'll get the package! One other time that this happened it was over a month before it finally arrived. Hoping it won't take that long this time!!
Posted by Living By Lysa at 4:12 PM