Love With All the Extras

Last year at Josiah Venture Spring conference Dave taught through the most well-known Psalm, chapter 23. There were so many new insights that he gleaned and taught us, things that ended up being deeply transformational in our lives. (You can find audio files of his teaching HERE!)

For me, one of the truths that stuck most came from verse 6: "Surely goodness and mercy will follow me all the days of my life." Dave explained that the word mercy is "chesed" in Hebrew, and he described it as "love with all the extras"...the way that God loves us!

This week-end at Daniel and Laurie's wedding we experienced so many moments from the Lord of "love with all the extras". 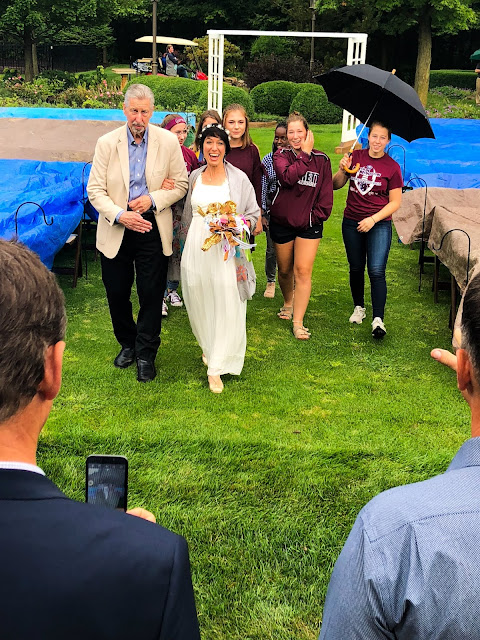 Like this one of Daniel filming Laurie coming down the aisle at their wedding rehearsal! I loved that he wanted to capture that moment forever.

And I wanted to capture this moment with my friends Amy and Cari! 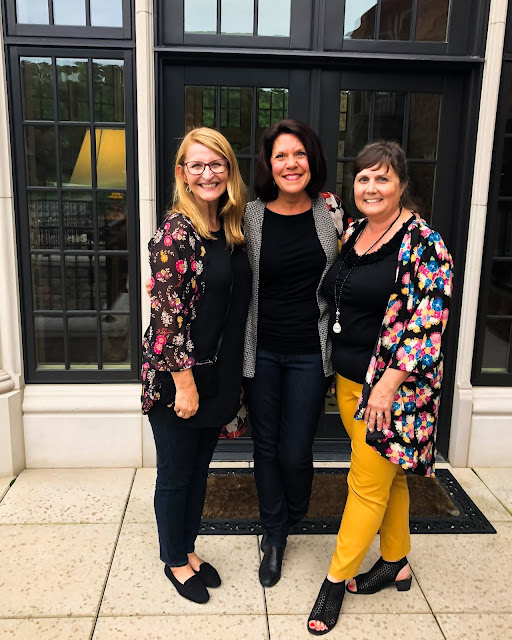 Cari served with us in JV in the Czech Republic for several years. She met Laurie fifteen years ago at a JV ladies retreat that Laurie was a guest at. That retreat was at the completion of Cari's time with JV as she was leaving to get married. Not only did she marry, but moved to Fort Wayne, and she and Laurie ended up becoming the dearest of friends!

Oh this was another sweet moment too...watching the photographer get pictures of Laurie's dress before she put it on that morning. 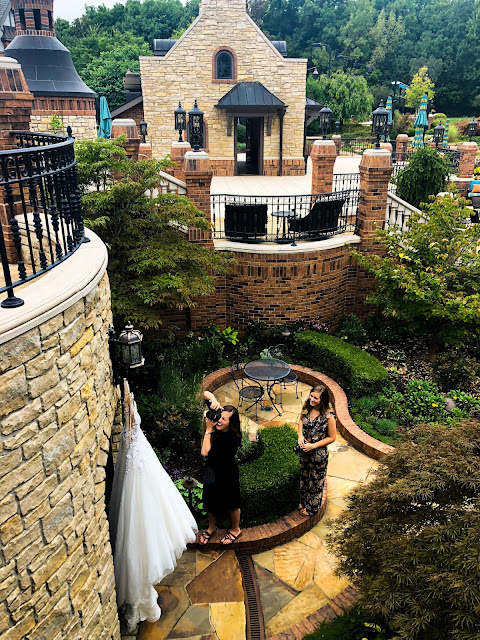 It's been a long time since I've had the joy of being with a friend on her wedding morning. This was a personal "love with all the extras" moment, getting to be there to see Laurie get her hair and make-up done in preparation for her big day! 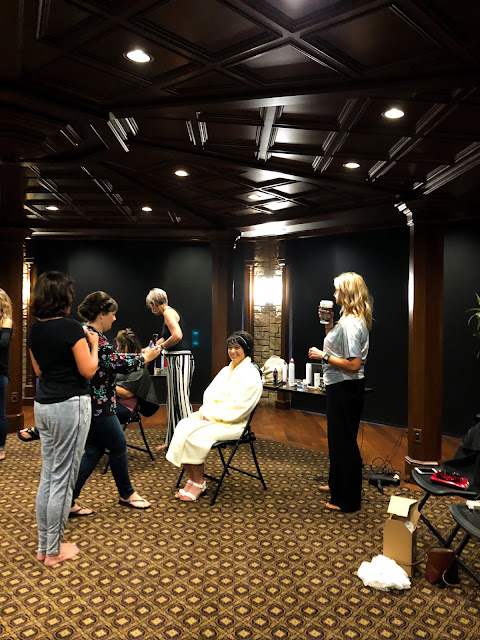 And to pull away for a few minutes and pray together with her. 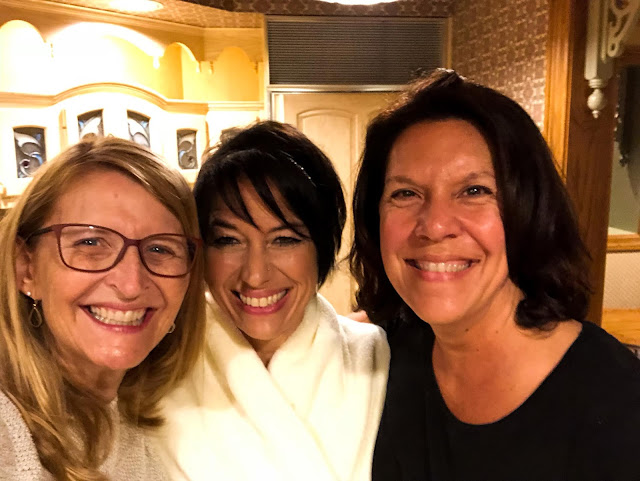 And how wonderful to watch Amy help her put her dress on...a moment we'd all been waiting for! 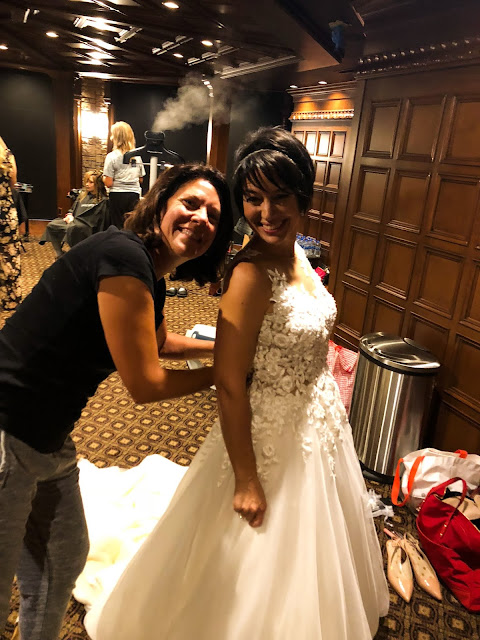 I stepped outside just before the wedding, and happened to see this. 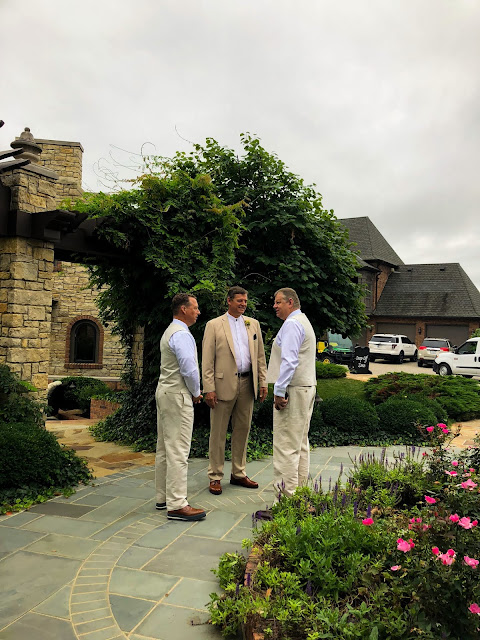 Daniel with his brother, Nico, and Laurie's oldest brother., Eric. Just a cool moment watching them relate before all the festivities began!

While I was on stage, behind the veil to play the piano for the wedding, my sister-in-law, Kristi was in the audience. Later when she showed me her pictures I saw this one. 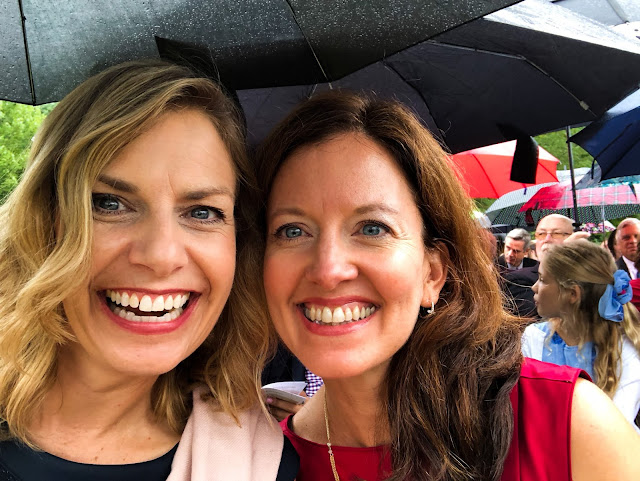 That's our friend Kerry! Kristi just happened to sit by her and take a picture with her, not knowing until afterward that we knew her! How fun to see these two smiling faces together. An "only God" kind of moment.

Another friend was at the wedding too. 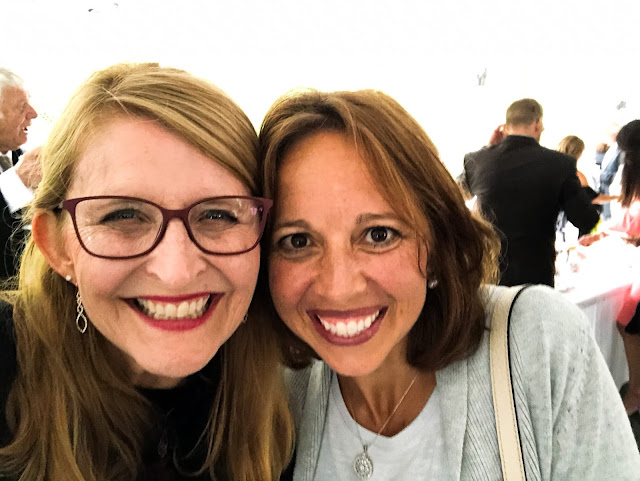 And this is a crazy story! I just met Angie in May in Prague through a mutual friend (the world is SO small sometimes). She and her husband had been missionaries there for nine years, but we'd never met.

They moved back to the States in July, and just two days ago I messaged her from the train as I was heading to Prague to fly to this wedding. Because the last time we'd met I was coming in by train, it made me think of her and want to write and see how the transition back to the States had been for them. LITTLE DID I KNOW that she and Laurie are friends!! Angie and I had met through a whole other connection! It was so fun to see her ("Hi Angie!!") again at the wedding.

She snapped this picture, which happens to be another "love with all the extras" moment. 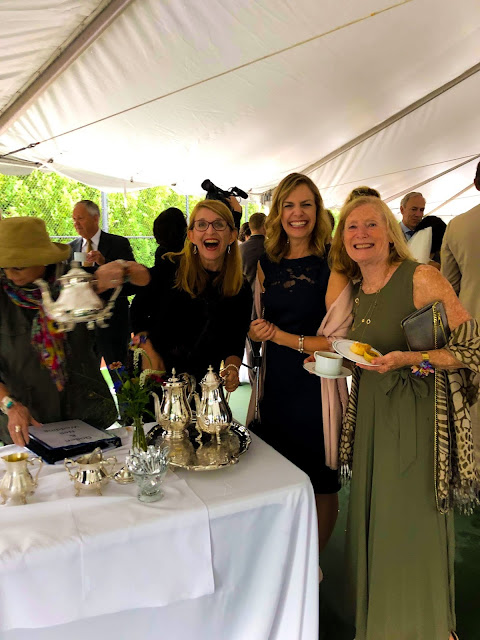 For twenty years I've been hearing about Karen, the woman on the right. She has been a mentor and friend to Laurie for 25 years, and yet she and I had never met! We've sure known about each other, but had never had the opportunity to be with each other. What a wonderful, godly woman she is!

Another one of those meetings, that just showed God's love with all the extras was with Cara, in the center. 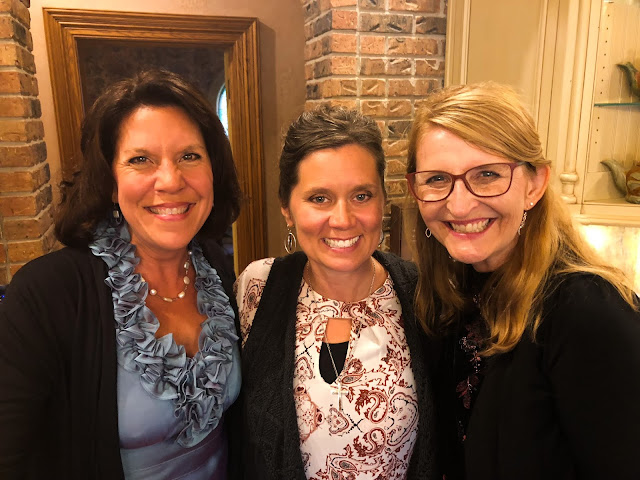 She's another one that I've heard about for years from Laurie, but never met. She introduced herself, explaining that she had been one of Laurie's roommates years ago.

Again, while I knew her name and had heard about her, I had NO IDEA that she is also the sister of one of our JV missionaries in Poland, Korban Miller! I just about fell over when she told me that piece of information! My goodness...what a wonderful collection of people to have the joy and privilege of spending time with at this wedding!

There were more too! I just didn't get pictures of them to tell more "love with all the extra" stories!

But the last one is of Laurie's dad with Pavel and Jana. 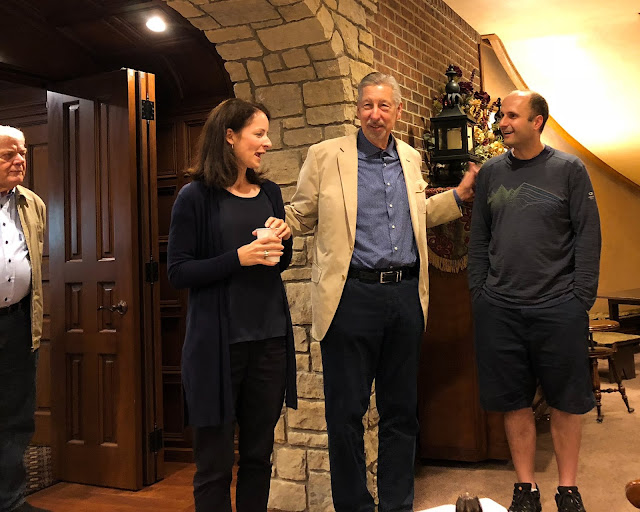 Many years ago, when Pavel was single, he came to Fort Wayne from the Czech Republic to do an internship at Daryle's firm there. He lived with the Doden's, and became very good friends with them. He and Jana married ten years ago, and in this picture Daryle is in the middle of telling everyone about some advice he'd given to them in their early years of marriage!

But do you know what the "extra" is about these two?

They live at our house in the Czech Republic! For the past six years, they have been our closest neighbors, living in an apartment over our garage. Though of course I knew they were coming (though we flew on different flights), it was so sweet to see them here at the wedding.

And those are some of the "love with all the extras" that came at Daniel and Laurie's wedding week-end!
Posted by Living By Lysa at 8:00 PM