Our dear friend, Laurie Doden, is getting married in Indiana this week-end, and Dave and I are here for the happy event.

Since Laurie and her groom, Daniel, have such a remarkable God story of their relationship, I wanted to tell parts of it to give context for why this is such an amazing wedding to be a part of, along with so many other dear friends and family who are rejoicing as well. 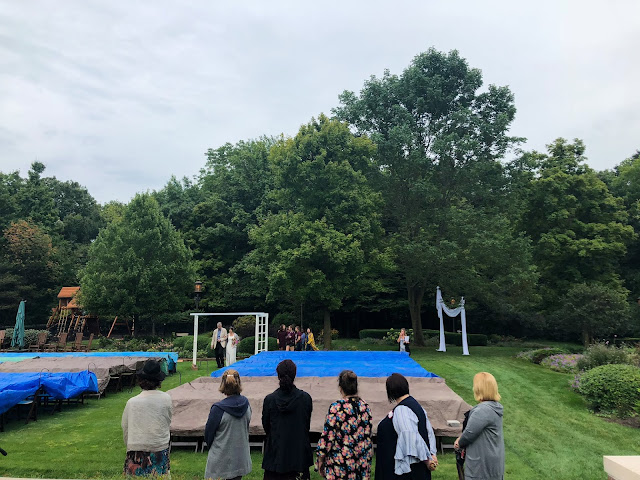 Dave and I met Laurie nearly twenty years ago when she was heading up her family's foundation. She came to visit us when we were in the middle of our first reconstruction project at Malenovice. Our hearts quickly knit together with hers, and we began a deep journey of life with her.

Twelve years ago, Laurie was in South Africa visiting potential partners in ministry for the foundation. This is when she initially met Daniel. Their contact was brief and they didn't meet again for six years. 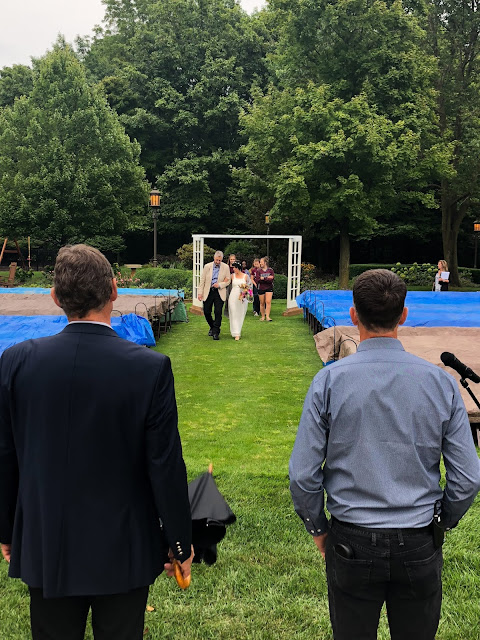 A mutual friend re-introduced Daniel and Laurie to each other, and they dated for "six minutes", as Daniel likes to say. He realized he was not ready for a relationship at that time. 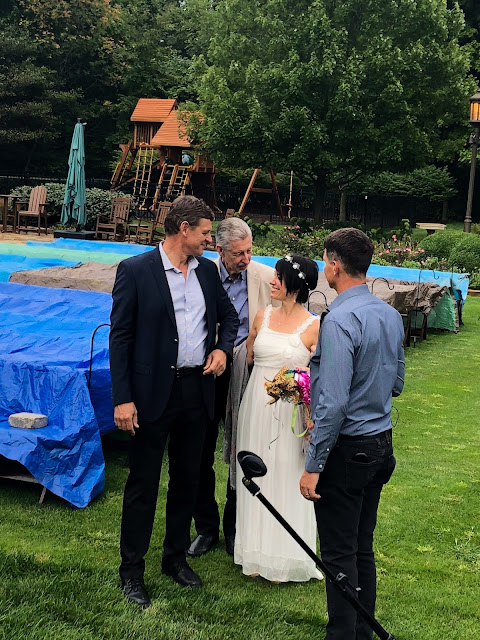 Dave and I happened to be in Italy on a ministry trip with Laurie when Daniel called to tell her this news, that he didn't want to continue to pursue their relationship. We watched as Laurie's heart was broken into many pieces, and cried painful tears with her in a hotel room in Rome.

I will be honest and say that at that time I didn't think very well of this man who had broken my friend's heart. 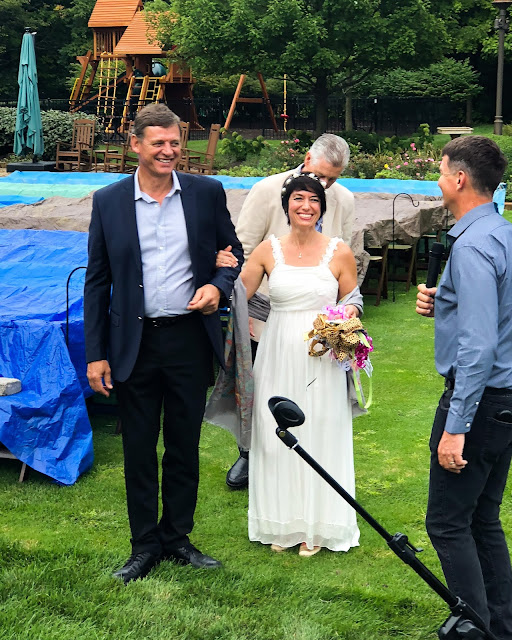 But while the rest of us tried to help Laurie pick up the pieces of her heart over the following months, God had another agenda.

Through many, many different ways and circumstances, he made it clear to Laurie that Daniel WAS the man He had for her. He told her to wait and pray and trust Him for the timing of when Daniel would come back into her life. 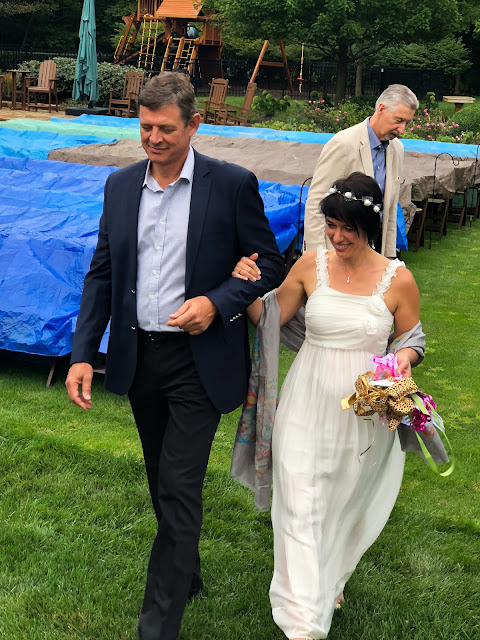 Many of us, Laurie's friends and family, sought the Lord with her over this, asking God to reveal His heart and plan to us too. At times what she had heard from the Lord seemed right, and at times it didn't.

However for Laurie, a woman who hears from the Lord and has one of the purest hearts of faith that I know, knew she'd heard clearly. And so she began her wait.

This eventually led her to move to South Africa two years ago, to continue leading her En Gedi ministry from there, having had no contact with Daniel. 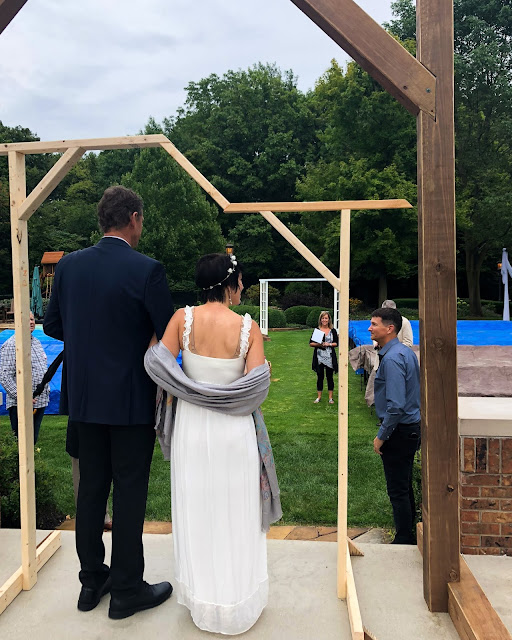 But four months ago, she received a text from him asking if they could meet.

From his side, when he'd been praying about his future he only heard the Lord say, "Set the record straight with Laurie." After hearing this for several months, he finally contacted her and they met over coffee.

And at the end of the day, they knew that God was leading them towards marriage. Astounding, right?!!! 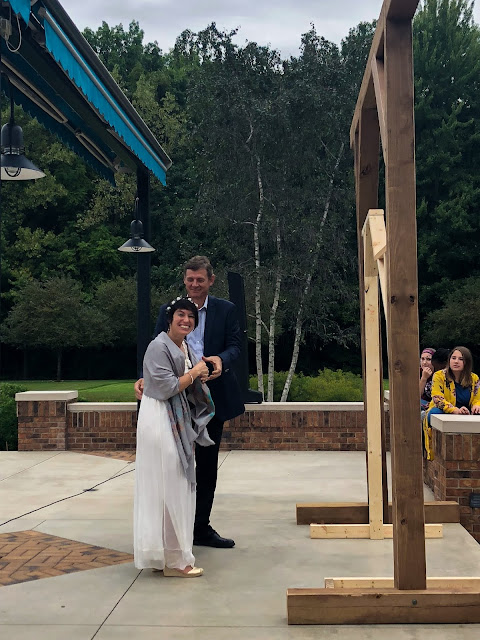 So here we stand today, about to witness the joining of their lives that at one time seemed impossible. 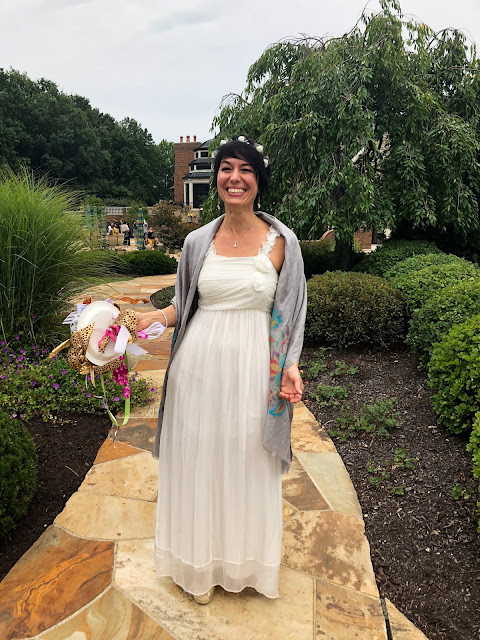 She has believed God like the saints of old, when there was no sign or reason to believe.

Oh it doesn't mean it wasn't hard, or that there weren't dark days. She will tell you that it's been some of the most difficult days, years, of her life as she's waited without knowing how God would bring this to pass.

In July, she and Daniel came to Indiana for the 4th of July with her family, and there, in front of them, he proposed and officially asked Laurie to marry him. However, the ring that he'd ordered for her in South Africa hadn't come in time. So instead, they'd gone to Walmart the day of their engagement, and picked out a ring for $8.88!

This is the ring she's been wearing up until now. 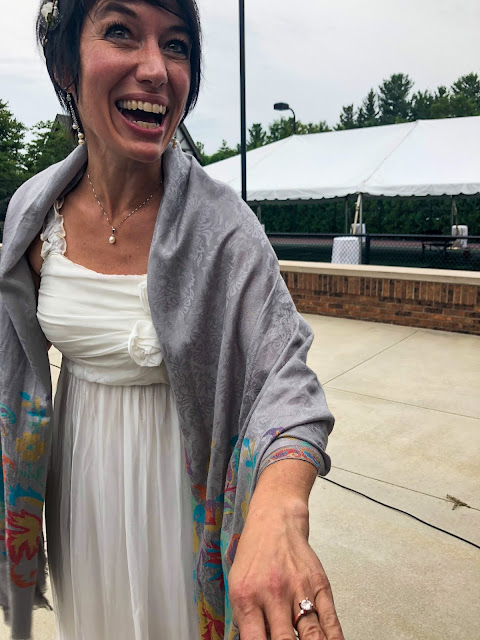 Little did I know when I took that picture after the rehearsal today, that another significant moment was about to occur. 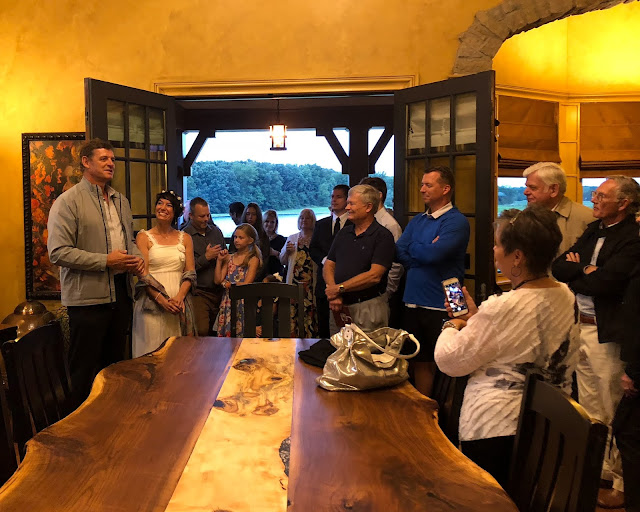 We all went to Laurie's brother and sister-in-law's home for the rehearsal dinner that evening. Before the meal began, Daniel asked if he could say a few words. He told a bit of their story, concluding with the part about the Walmart ring.

And then he pulled a box out of his pocket, knelt down, and again, asked her to be his wife, the day before their wedding, and placed a beautiful diamond ring on her finger!! 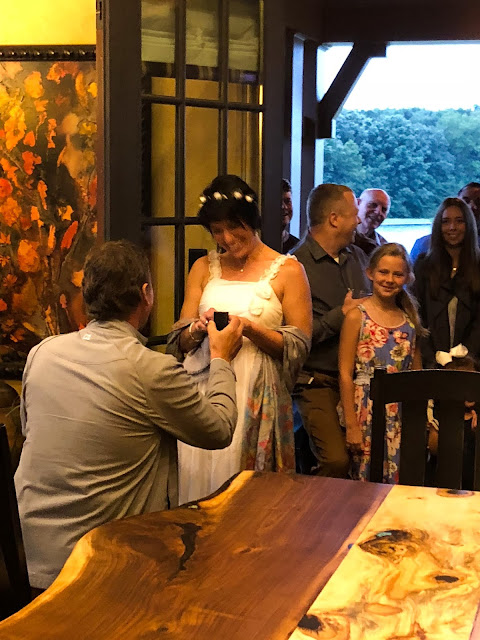 And now, after many years of God writing a story that only He could write, these two will marry tomorrow because of their love for each other, and even more important, the love of God that has brought them together. 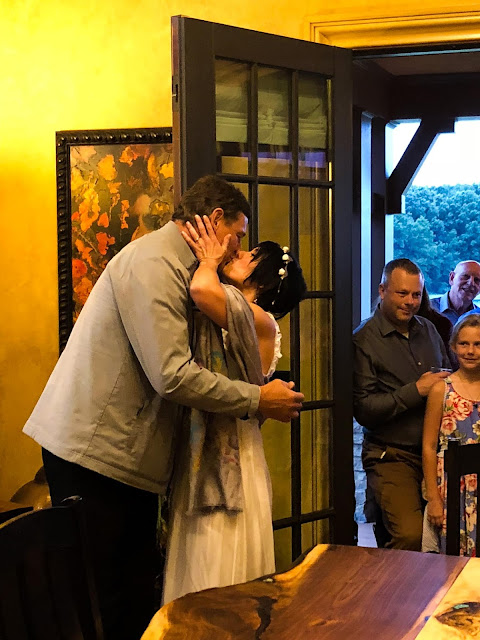 It's a marriage made in heaven, for a godly man and a faith-filled woman, who have both waited on God for his timing for this amazing event.

May the Lord's name be praised when people speak of Daniel and Laurie! I'm so glad to be here to witness the end of this part of God's story, and the beginning of what's next in the story to come for their lives.

Oh and to set the record straight from my end: I absolutely adore Daniel today and truly know that he IS the one that God made for Laurie!
Posted by Living By Lysa at 11:00 PM