Heading across the way to breakfast, I was thinking curiously about what the first full day in Turkey held for us! 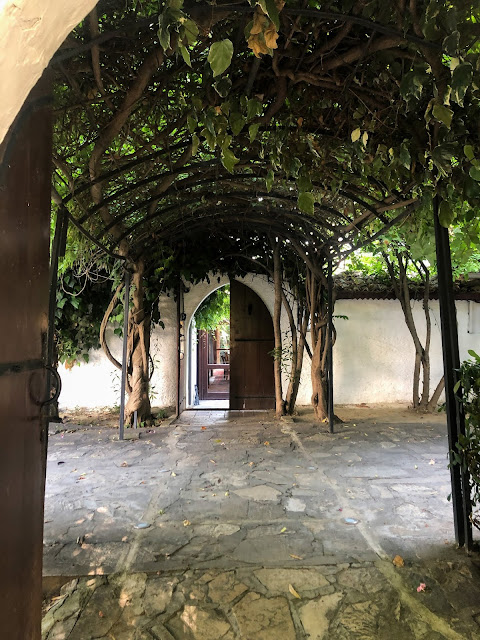 We're staying in the city of Selçuk because it’s the gateway to the ancient city of Ephesus! 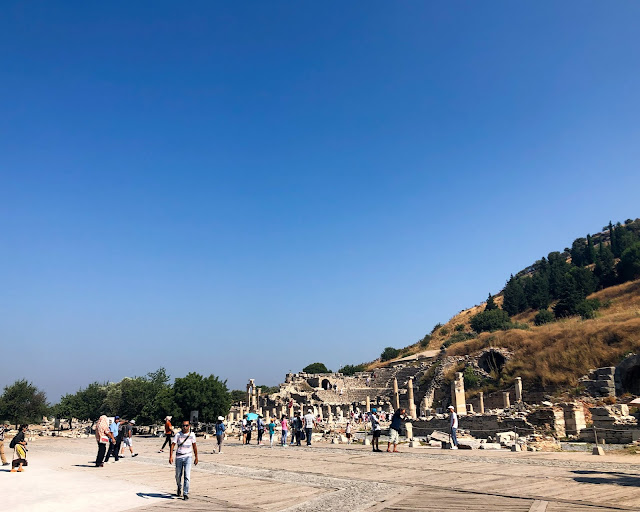 Arriving early on this hot June morning, we headed into this ancient Greek city, built in the 10th century BC! 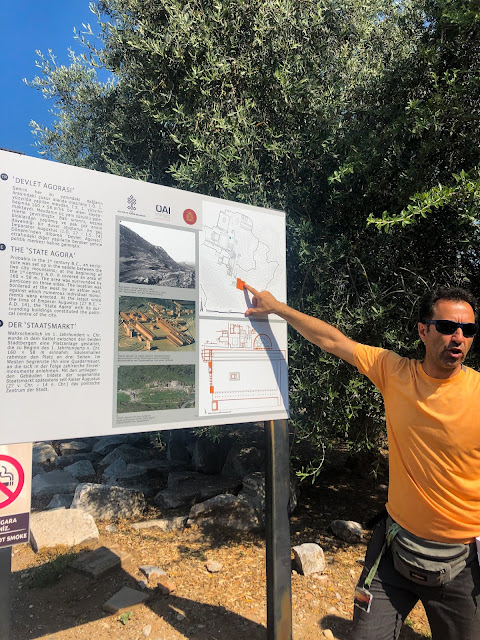 There are so many new words I'm already learning on this study tour of the early church; words like "agora" are becoming commonplace! What is the agora?

It was a central public space in ancient Greek city-states. The literal meaning of the word is "gathering place" or "assembly". The agora was the center of the athletic, artistic, spiritual and political life in the city.

While there is much to be seen and understood here, for now I'm just soaking in the fact that these are truly ancient ruins that have existed for a very long time! Excavated in the mid 1800's, here you can see the original white marble of the agora from 2000 years ago. 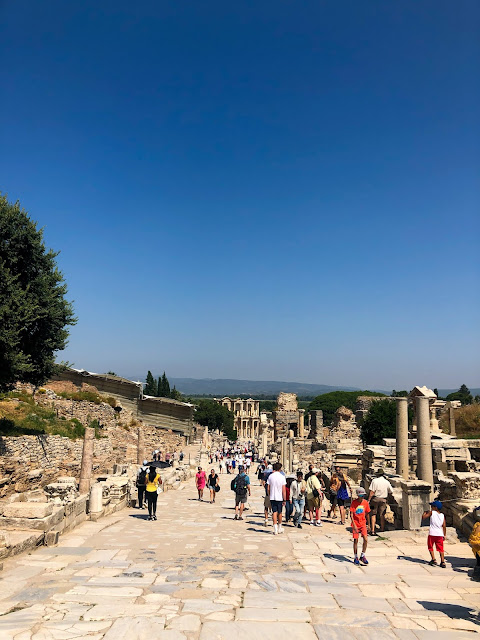 We saw so many other fantastic ruins that were unearthed, such as this theatre where government meetings were held.


But then, we rounded the corner and I literally felt like my breath was taken away. 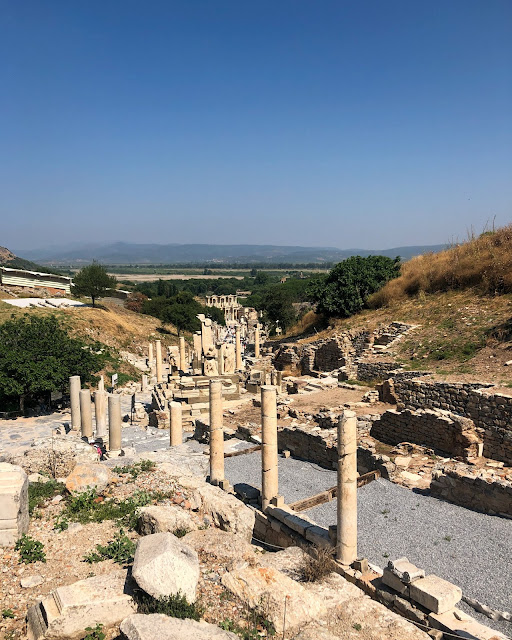 To say I was surprised at the enormity of this ancient site hardly captures the reality of seeing it in person! I had no idea at all that this existed! 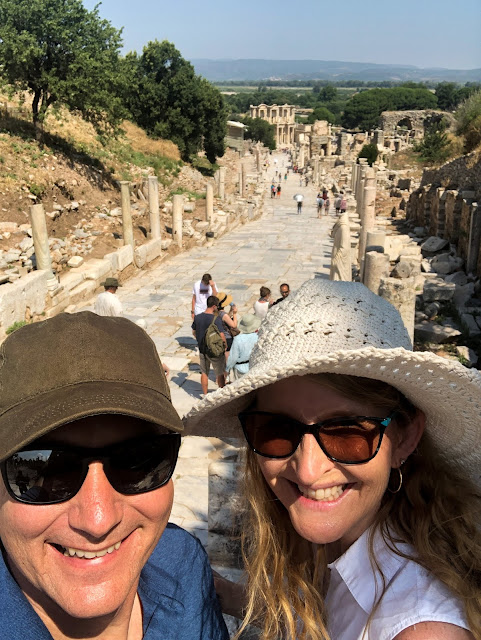 Imagine unearthing all of this, as John Turtle Wood (a British architect, engineer and archeologist) did in the mid-1800s! 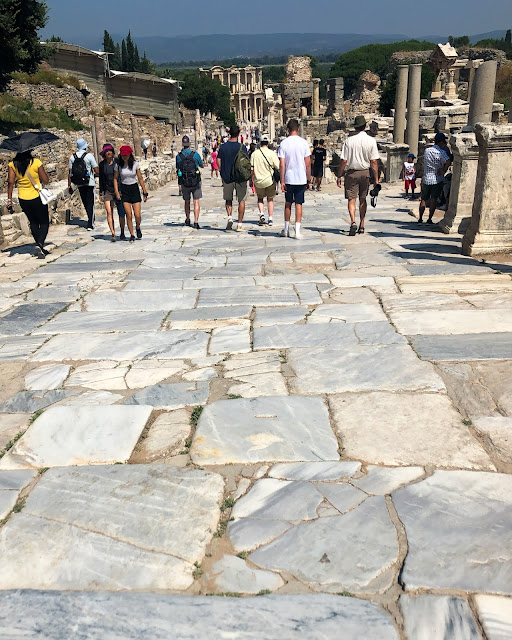 The magnitude of Ephesus is quite stunning as you walk from ruin to ruin, seeing the extent of this city that once held perhaps as many as 225,000 people! 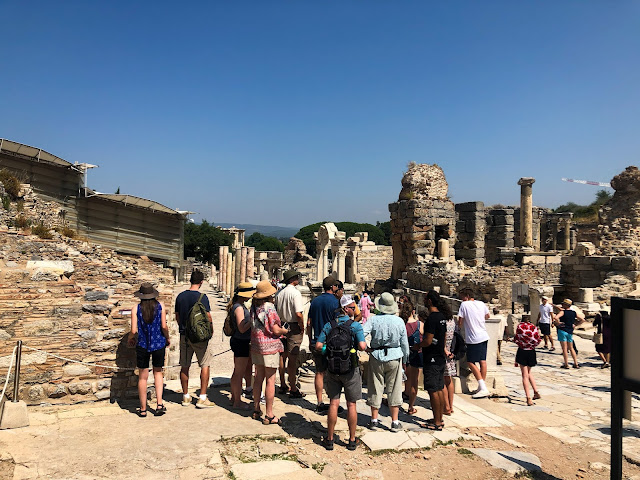 Today its only residents are cats. Lots and lots of them! 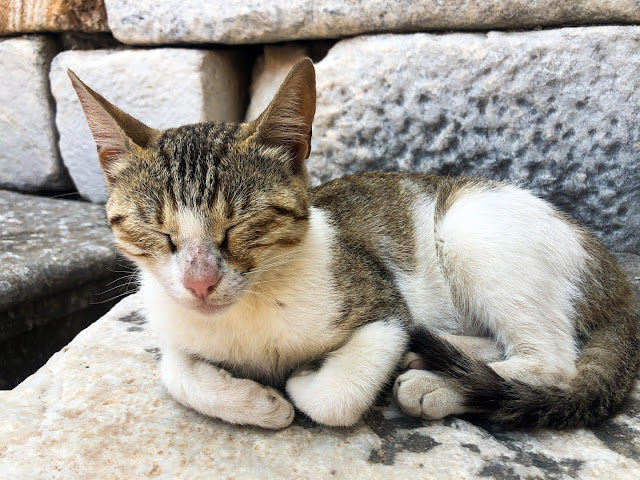 We continued down the marble road, and got our first glimpse of the famous library of Ephesus,  completed between circa 114–117 A.D. Built to store 12,000 scrolls, it also served as the burial place for the Roman Senator that it was built to honor. 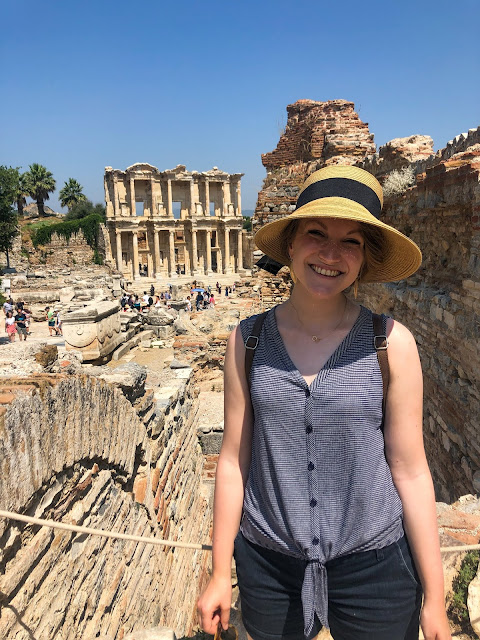 Before heading to see it, we took a left and headed into another fabulous site: the terrace houses. 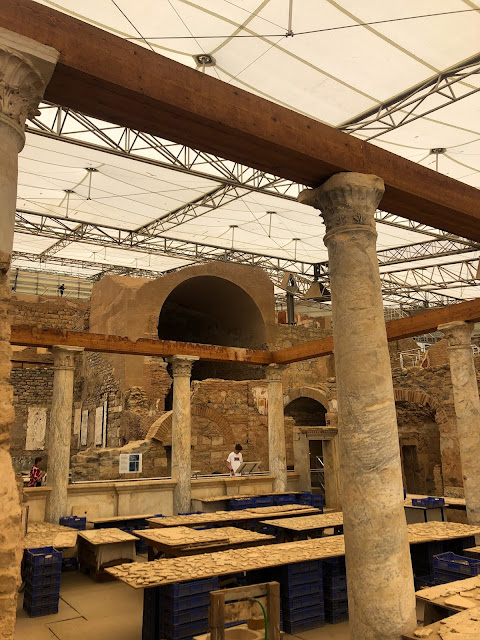 This is an unbelievable complex of houses built 2000 years ago! 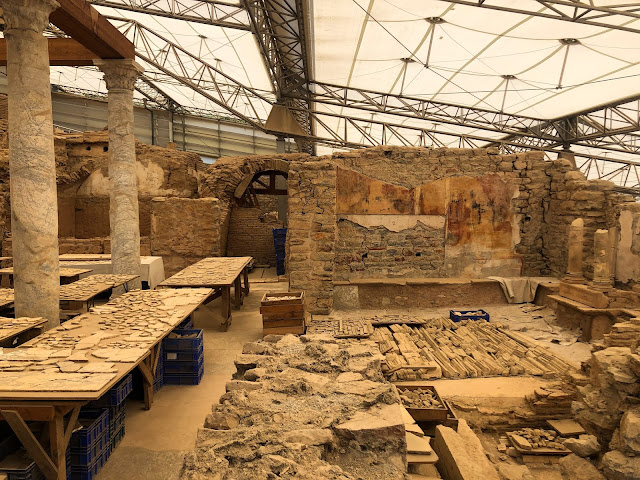 These luxurious residential villas occupy an area of about 2500 square meters and consist of private houses, built on three terraces. The most prominent building is called a domus that is a villa inhabited by wealthy individuals and several houses belonging to the middle-class citizens. The beginning of the complex dates back to the first century AD, and the houses were inhabited until the 7th century AD. 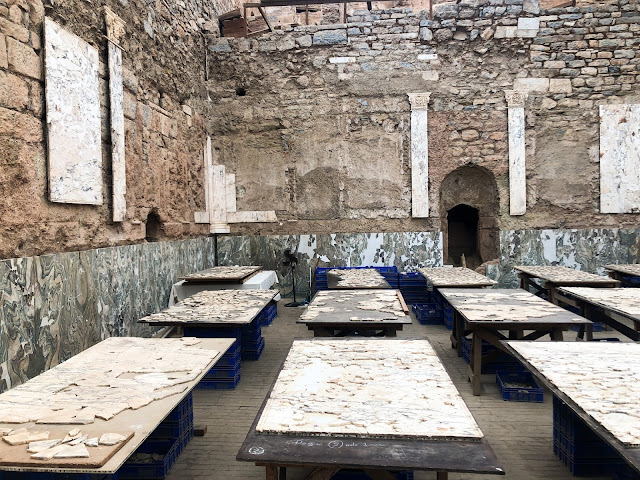 This is the ultimate puzzle for someone who loves that kind of challenge: putting together the marble that once adorned these walls! 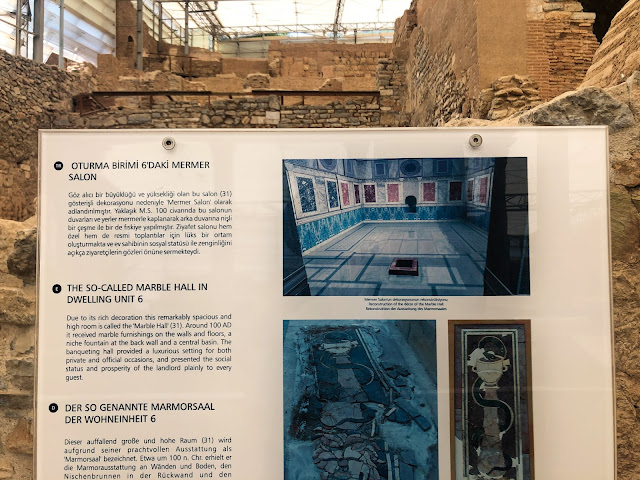 This complex is truly mind boggling. Not only were there spacious living areas, beautiful mosaics, and hand crafted art that was found, but also plumbing for running water, and bathrooms equipped with bathtubs! This was ancient day luxury at its finest. 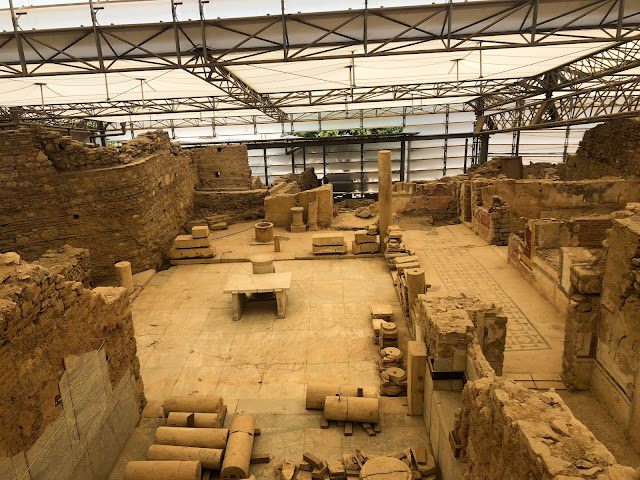 When we asked what kind of people would have lived here, our guide, Aydin, said that for sure it would have been those involved in business ventures as they were the wealthy who could have afforded such luxury.

All of this has been put under an enormous covering in order the protect it, and allow for continued excavation and exploration of this amazing sight. Honestly, this was simply amazing to see and we are all in awe of this incredible ancient city. 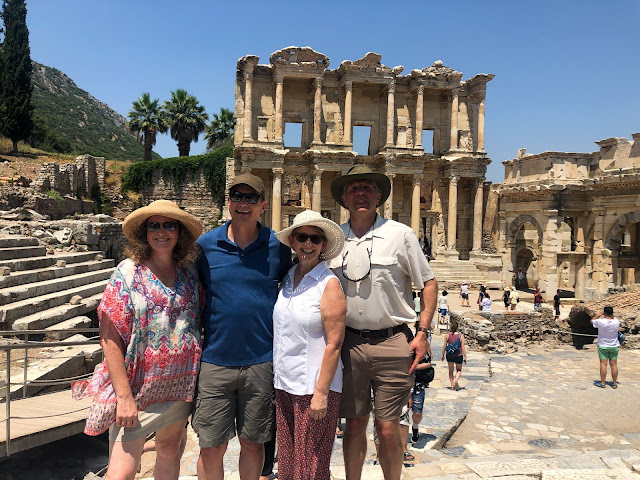 The interior of the library of Celsus was likely destroyed in an earthquake and fire in 262 AD.  But it's remarkable that some of it is still here to see today! 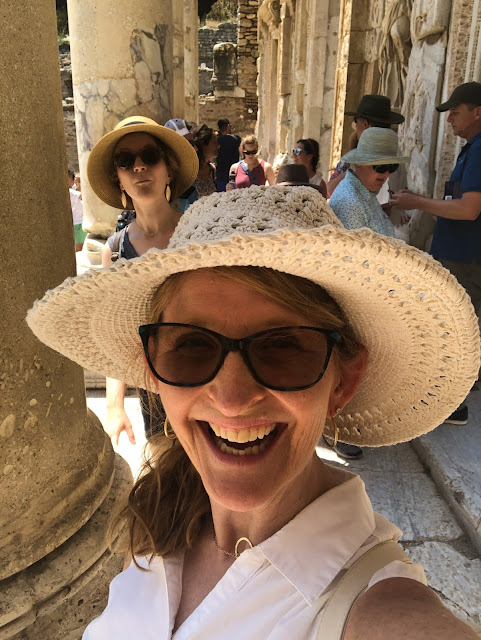 Dave began to read in this spot from Ephesians, Paul's book to the believers in this city, sent by him when he was first imprisoned in Rome. Amazing to think he knew this very spot! 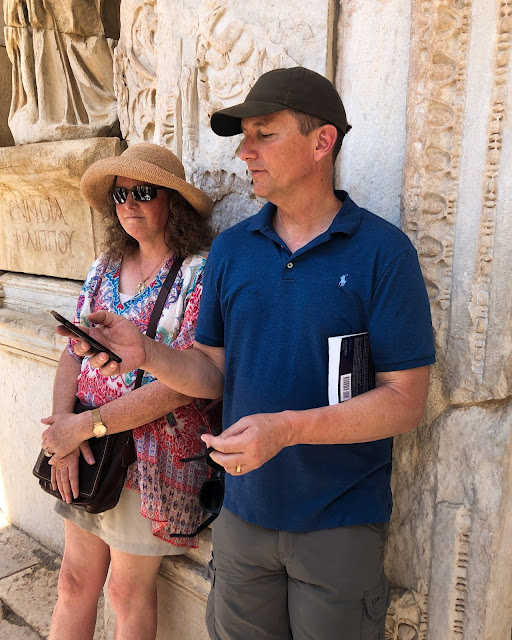 As if I hadn't seen enough, we headed down the way to one last magnificent sight here in Ephesus.

This is the very place where Paul was seized, after he'd proclaimed that the people of Ephesus were worshipping gods made by human hands (Acts 19:26). The silversmith, Detmetrius, who made silver shines of Artemis (one of the main gods being worshipped there) called together the people to protest against Paul who has convincing large numbers of people to follow Christ.

Imagine Paul somewhere down in front as 25,000 people chanted "Great is Artemis of Ephesus!" The Bible says Paul wanted to address the crowd, but his disciples wouldn't let him (for sure they feared for his life). 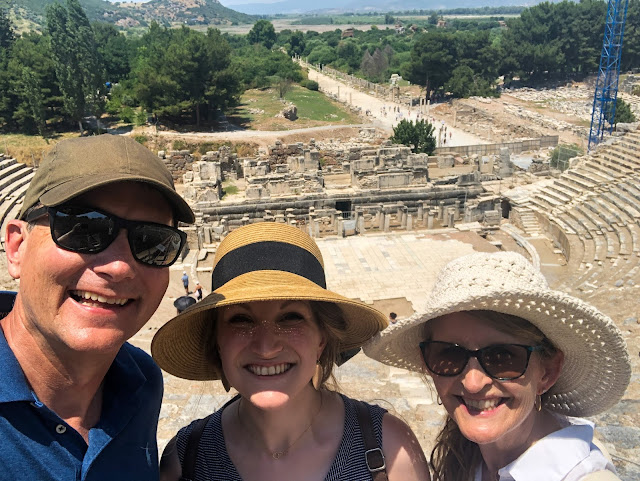 A rational man, a city clerk, quieted the crowd after two hours of chanting and said to them, "Fellow Ephesians, doesn't all the world know that the city of Ephesus is the guardian of the temple of the great Artemis and of her imagine, which fell from heaven? Therefore, since these facts are undeniable, you ought to calm down and not do anything rash..." 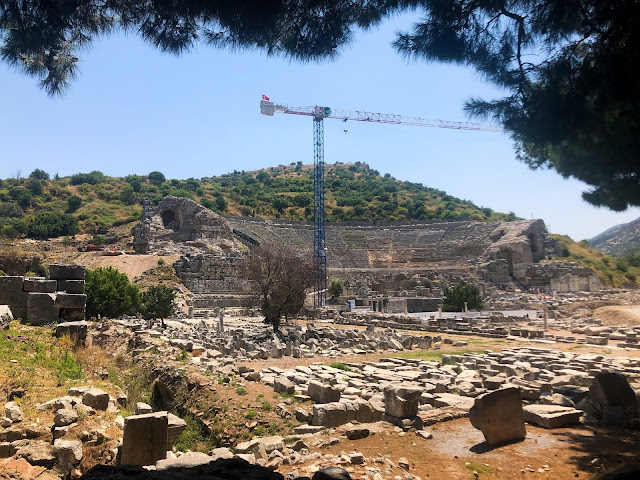 He went on to say that there was really no reason for the rioting, and that if they truly had a grievance that they should take it to the courts. He dismissed the crowd, and Paul, after encouraging the disciples there in Ephesus, went on his way to Macedonia.

Seeing this place with my own eyes, the pressure and setting Paul and the early church lived in the midst of, was eye opening. It was NO SMALL THING to proclaim the one and only living God in a place where many gods and goddesses were worshipped.

What Paul and the early believers did in this place is nothing short of amazing! They stood firm in their conviction and faith that there is only one God to be worshipped - the living God in three persons!!
Posted by Living By Lysa at 4:04 PM