Earlier today, on the study tour of the Early Church that we are on in Greece, Dave was teaching from the book of Revelation while we were up near the very spot where the Apostle John received Jesus' words that became the last book of the Bible.

As he was talking about what it will be like when God's Kingdom is restored for eternity, he read a quote by C.S. Lewis from "The Problem of Pain" that has stuck with me today, and probably will for a long time!

You have never had it. All the things that have ever deeply possessed your soul have been but hints of it -- tantalizing glimpses, promises never quite fulfilled, echoes that died away just as they caught your ear. But if it should really become manifest -- if there ever came an echo that did not die away but swelled into the sound itself -- you would know it. Beyond all possibility of doubt you would say "Here at last is the thing I was made for." 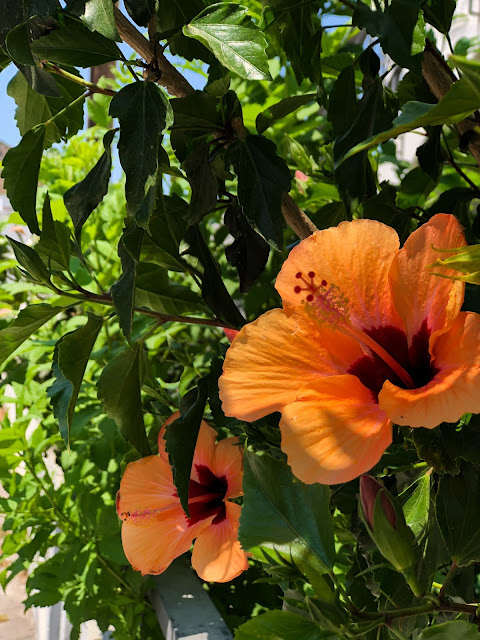 In short...everything beautiful we experience here on this earth is only a mere shadow of what is to come!

So that exquisite orange hibiscus that looks so beautiful to me today as we walked? It will be even more exquisite!

This food that we had at lunch -- the freshest and most delicious tomatoes, cucumbers, onions and feta that I've ever tasted -- will be even fresher and more delicious than what I enjoyed today! 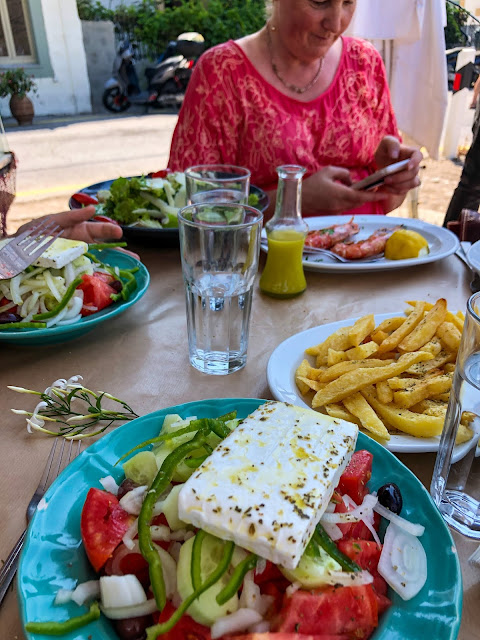 Those spectacular bougainvillea vines that look perfect in front of the hotel? They'll be even more amazing when we live on the new earth! 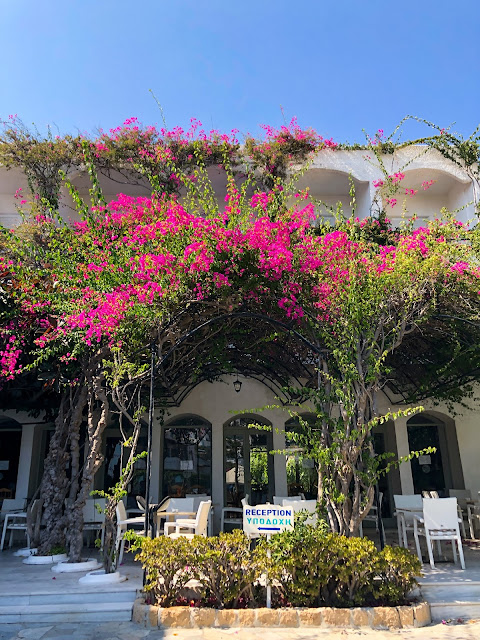 The Aegean Sea that looks so picturesque? It will be the perfect temperature and you'll be able to swim for hours, and maybe even days on end in it! 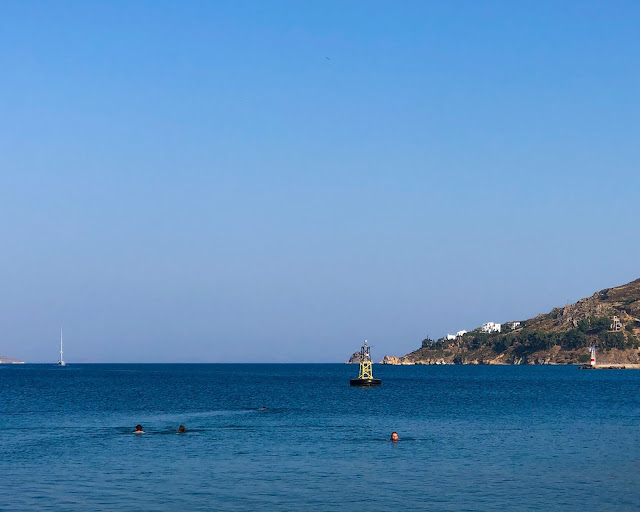 This daughter of mine who delights me to no end? It's hard to believe because I already love her so much just as she is -- but she will be made new and be the very best version of herself for all of eternity! 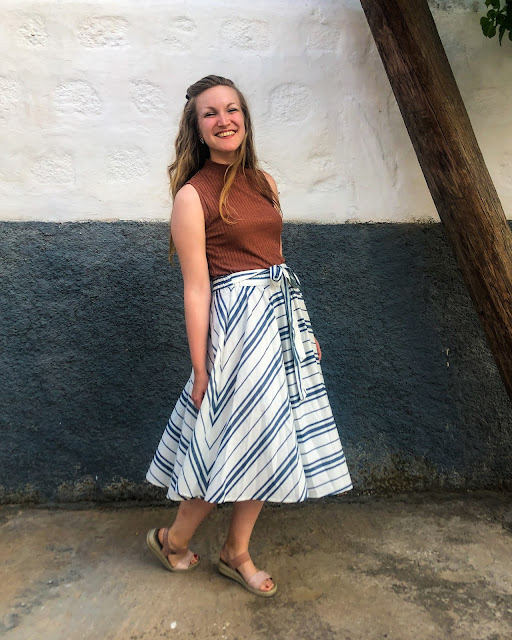 This man who has loved me so incredibly well for 32 years, and who I love with all my heart? However it works in heaven for husbands and wives, for sure what I know is that his love will be the purest and best form that it could ever be! 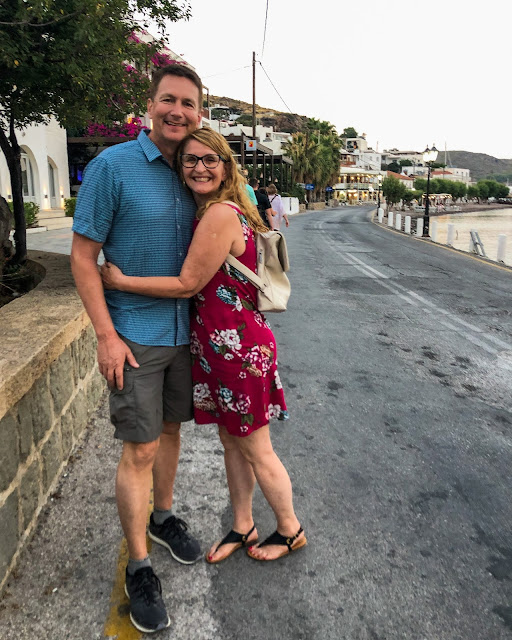 These darling island towns, with their lovely squares and beautiful items for sale on warm summer evenings? They too will be made new! 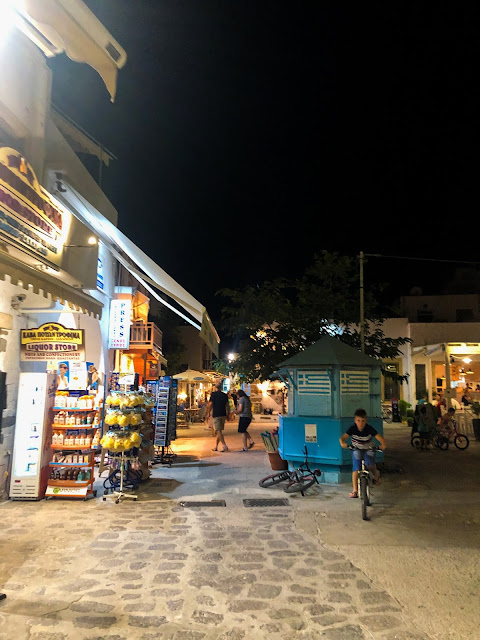 In the new heaven and earth there will be new friends to meet, like Irina in the organic store who generously let us try samples and told us stories from her life. 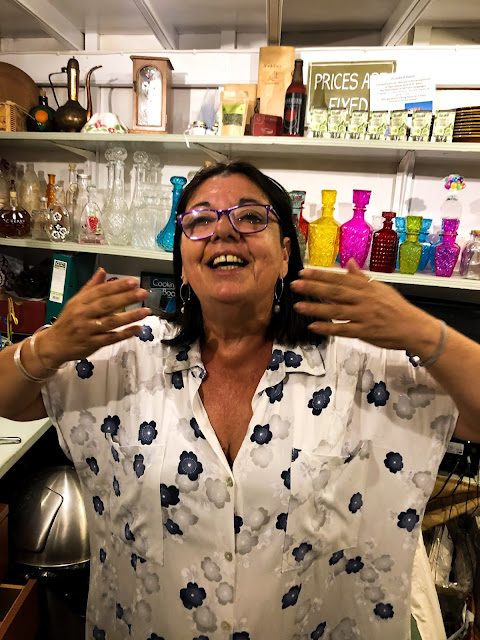 And there will be precious, long-time friends that we knew, loved and spent time with here on earth to be reunited with to share all of eternity with! 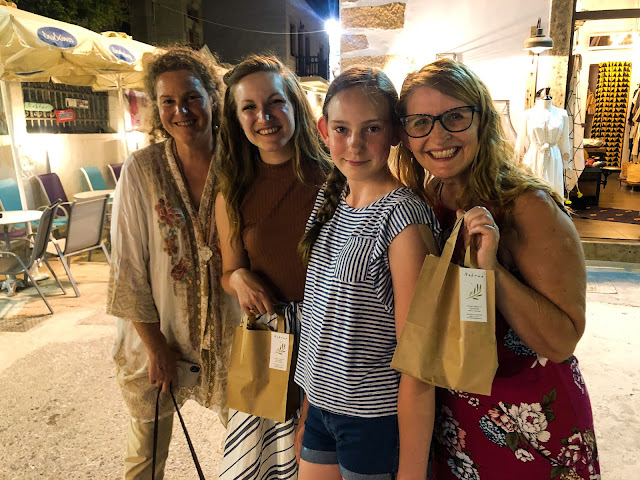 In the end, when all is made new, we will be able to say these profound words written by C.S. Lewis in the last book of the Chronicles of Narnia:

“The term is over: the holidays have begun. The dream is ended: this is the morning.”

“And as He spoke, He no longer looked to them like a lion; but the things that began to happen after that were so great and beautiful that I cannot write them. And for us this is the end of all the stories, and we can most truly say that they all lived happily ever after. But for them it was only the beginning of the real story. All their life in this world and all their adventures in Narnia had only been the cover and the title page: now at last they were beginning Chapter One of the Great Story which no one on earth has read: which goes on for ever: in which every chapter is better than the one before.”