While my posts up until now telling about the early church study tour we're on might lead you to believe that there are only ruins in Turkey, I assure you there is more here than that. 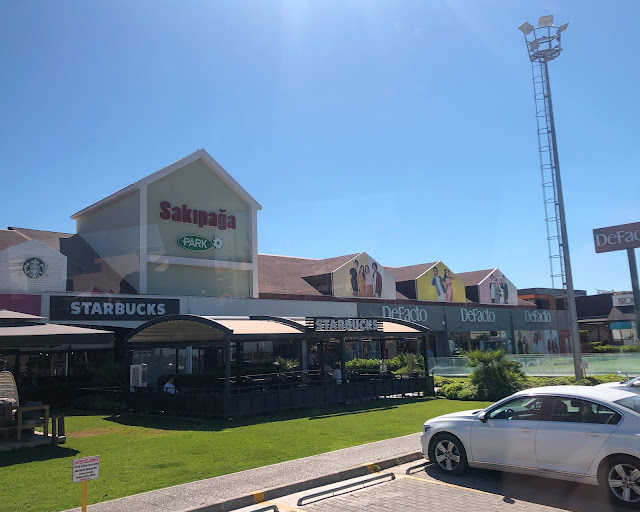 Yes, despite the prevalence of Turkish coffee here, Starbucks has infiltrated the market! And yes, our bus made a stop here this morning. 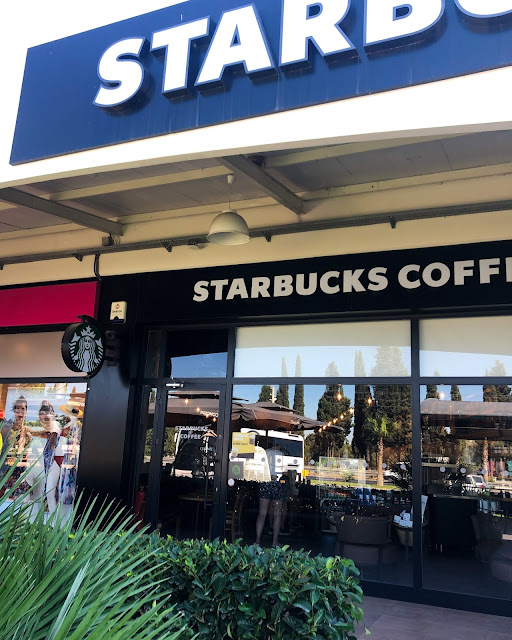 Believe it or not, I wasn't in the mood for it and settled for a lemonade instead. 😃

With a couple of hours on the bus today before our first sightseeing stop, we got started on what will be an ongoing event the rest of our trip: the telling of our stories! 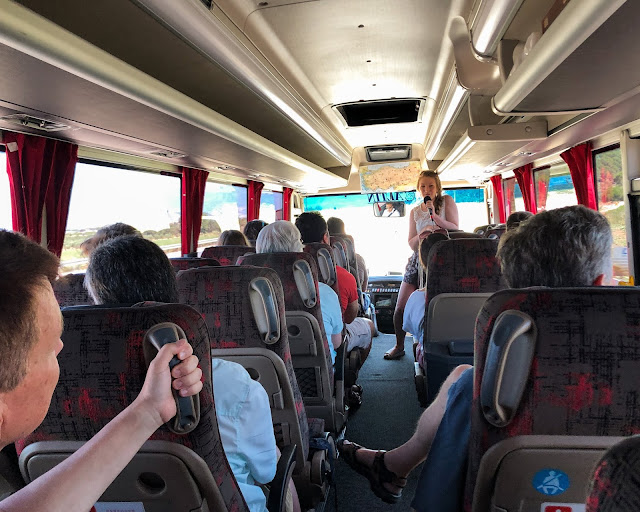 While we all know certain people on this trip, there are others that we don't know as well, and there are people that don't know us well! So it was fun to be the first ones up today, as the Patty family, telling our stories of who we are, how we came to faith in Jesus, and what our life looks like today!

Finally we arrived at our first location: Pergamon. 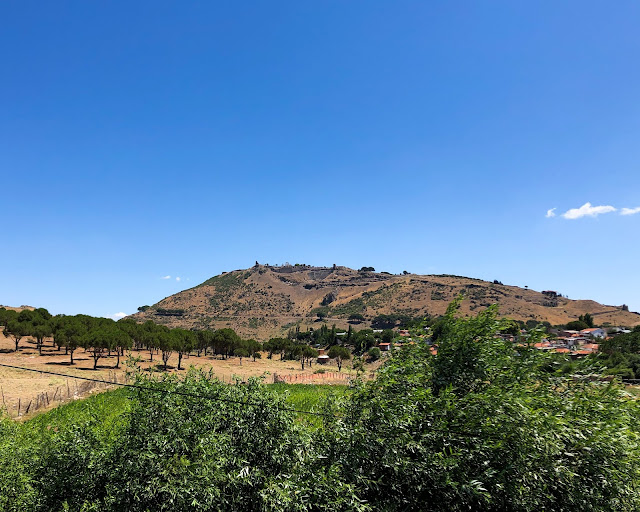 A powerful ancient Greek city (remember, that Ancient Greece had quite a far reach!), it was the northernmost of the seven churches of Asia mentioned in Revelation. 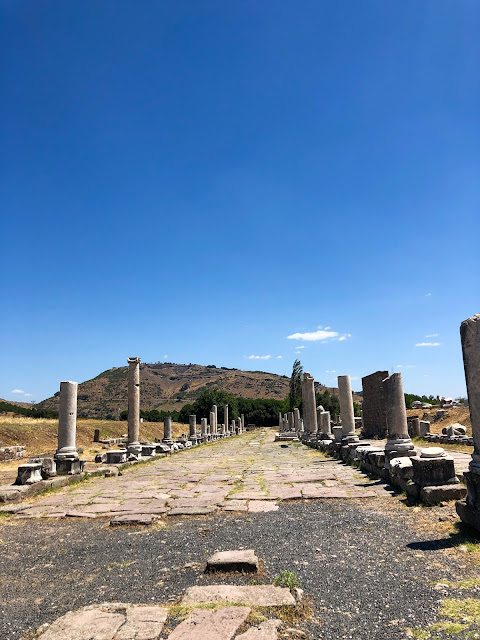 We first visited the Pergamon Asklepion  another word we keep encountering on this trip!

This asklepion was one of the most important healing centers, with baths, temples, a theatre, a library, treatment centers and latrines in its heyday. 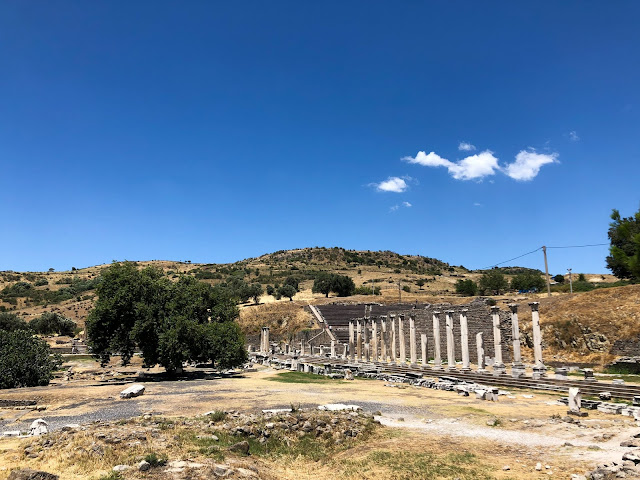 They offered many different treatments, including mud baths, the use of herbs and ointments, enemas and sunbathing. Patients walked through this very tunnel to their sleeping quarters. 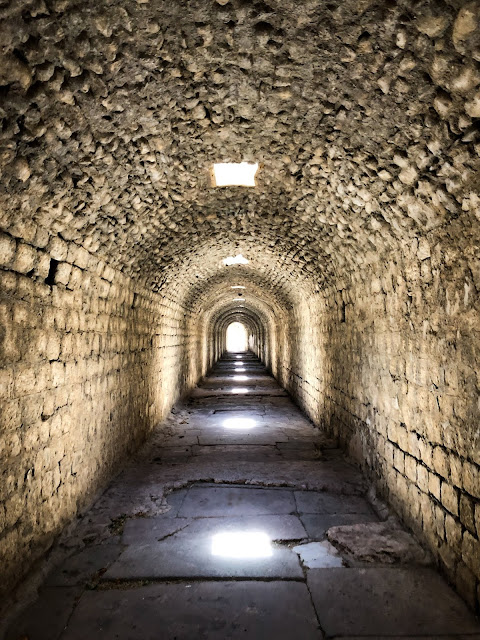 We gathered under the trees for today's teaching on the topic of "The Gospel under Pressure". 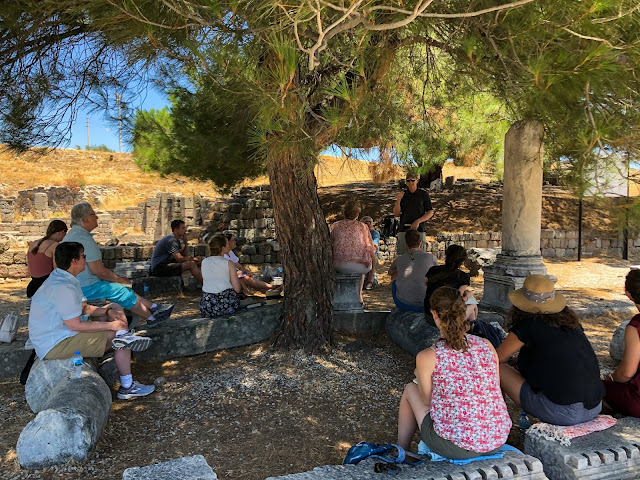 Imagine the Gospel being proclaimed in this place, where healing was done in the name of other gods? Can you imagine the pressure those believers were under? One of the things Dave talked about is how it's not our job to change the culture we're in, but rather that you stand your ground and not succumb to it. 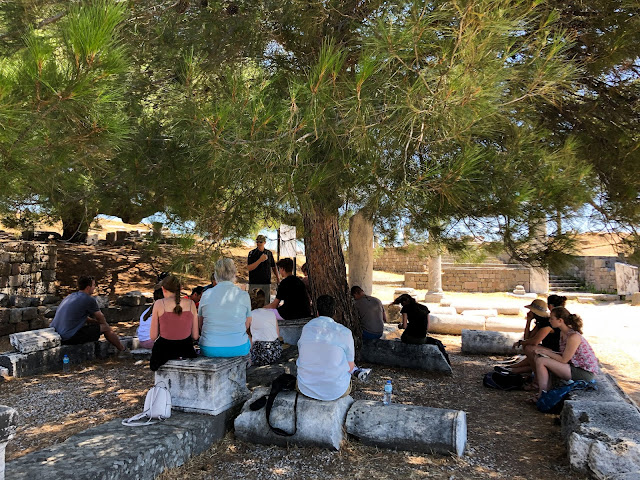 The believers in Pergamon were under the pressure to compromise morally, as well to compromise in accepting unbiblical teaching (see Revelation 2:12-17).

He led us in thinking about how we are constantly under pressure in these areas as well, and that the key is always following God, entrusting ourselves to His Word, and being quick to repentance when we fail! When we do that, God will strengthen us and give resources to help us stand firm.

Yes! This is how I want to live!


Again it's crazy to think that these healing centers, temples and gods that were once worshipped have all gone away. But the one true God has not! 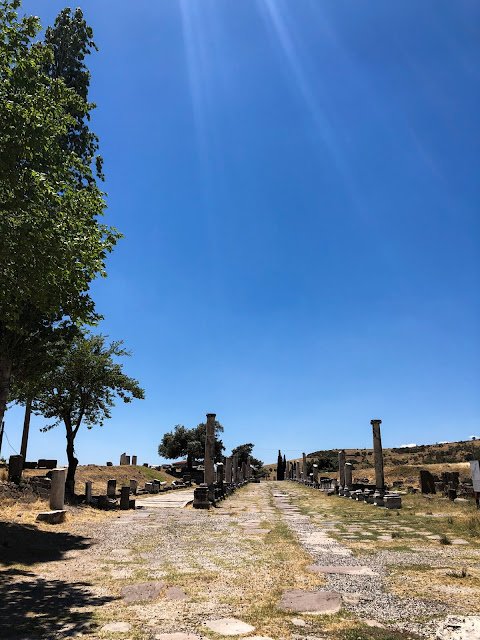 We took a break for lunch and headed into the modern day city of Pergamon, named Bergama. 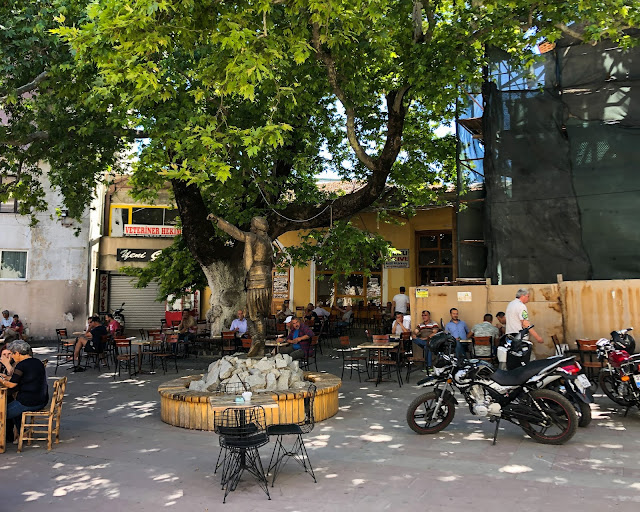 After lunch we tracked down coffee as I was finally ready for it. Guess what kind of beans they were using? 🤣 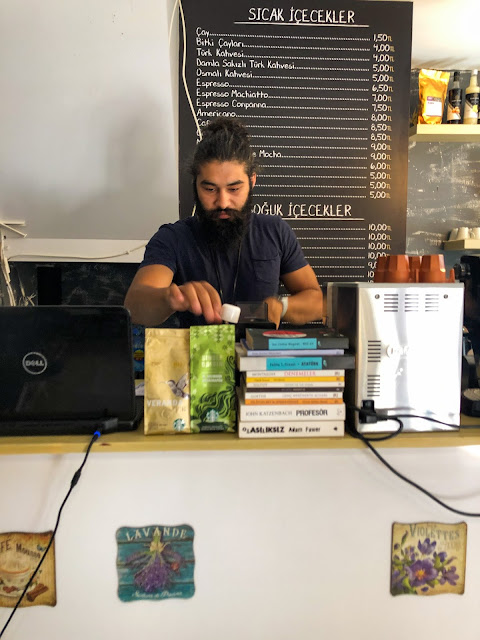 Couldn't get away from Starbucks after all! It was lovely to sit in the town square though with these two! 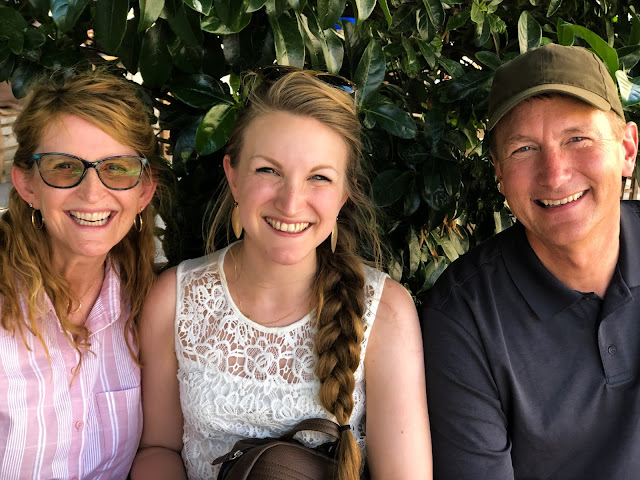 After lunch we headed up to the ancient city of Pergamon in a small gondola. 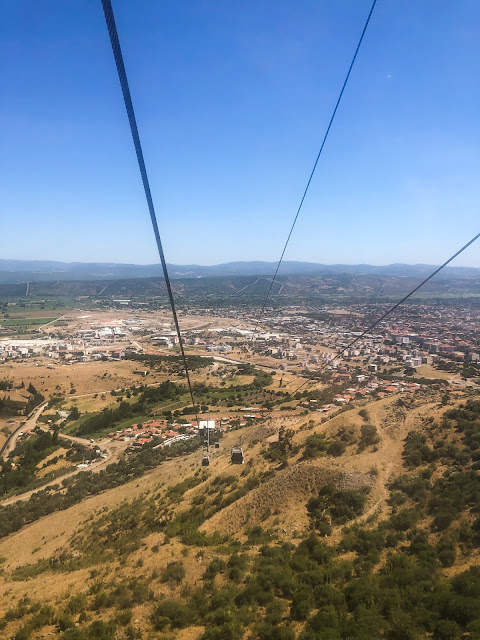 In this very spot was the Pergamon altar, which was unearthed in the 1800's. 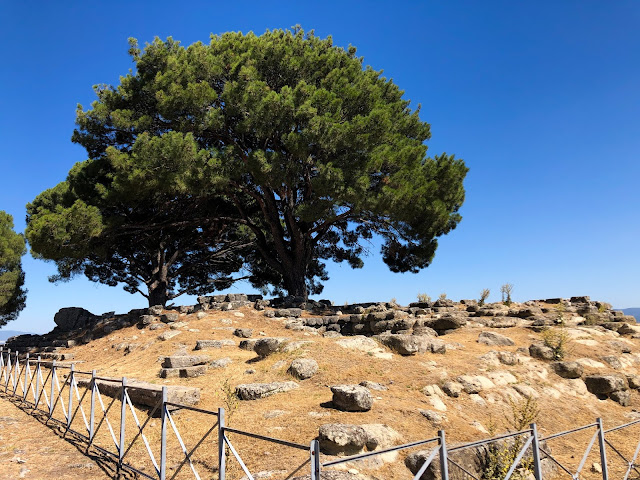 Want to know what it once looked like up here? I've seen this in Berlin at the Pergamon Museum!

While those ruins aren't here today, there are some other fantastic sights up here...including these two cute ones! 😀


The spectacular centerpiece of the acropolis of this ancient city, is its theater. Built with seventy-eight rows of seats and divided into three horizontal seating sections, it is the steepest theatre of the ancient world! 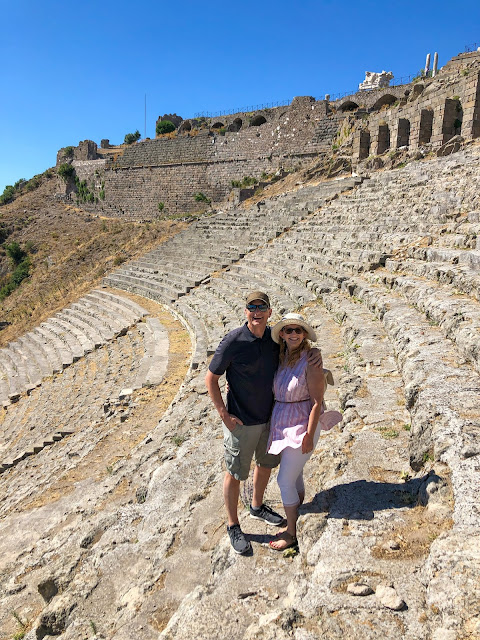 It's hard to comprehend from a picture just how very steep it is. 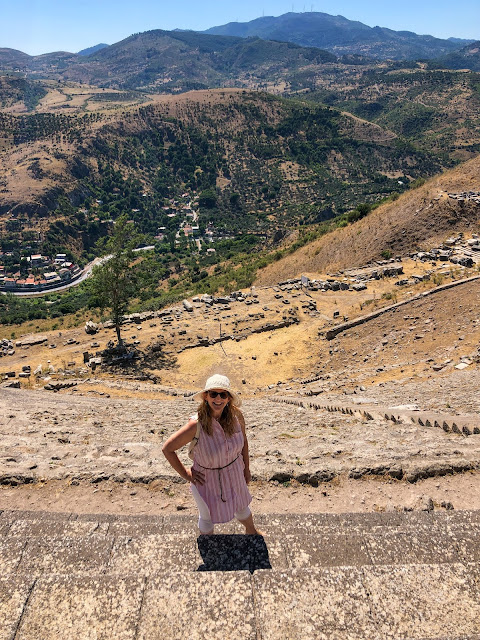 Maybe this picture will give you a little bit better view! Imagine the labor it took to build this. 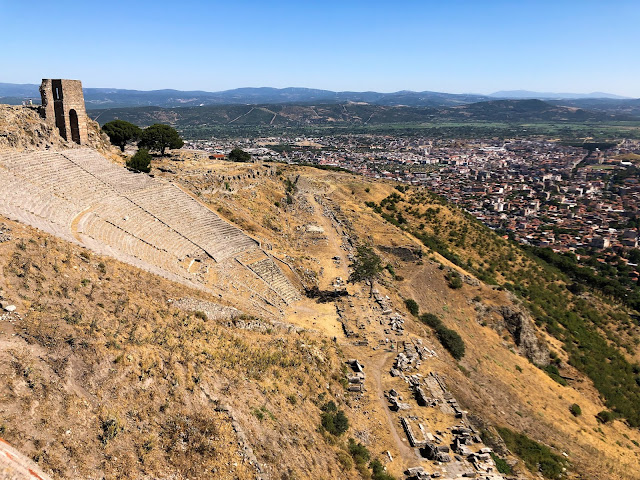 Rather than take the gondola down, we opted to hike it on this gorgeous warm day. 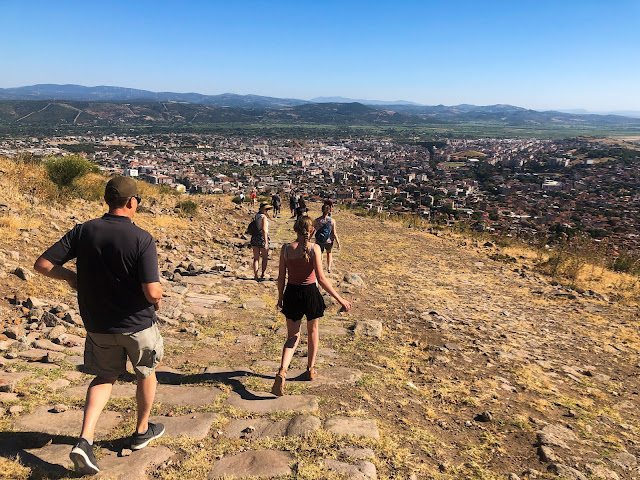 While I definitely feel respect for how these ancient cities were built and run, there's also a sobering impact on me as we see temple after temple, and hear about god after god who was worshipped by many instead of the Living God.

I'm thankful that believers before me paved the way by their courage, fortitude and perseverance to spread the Gospel. That is what we all strive to be about today! 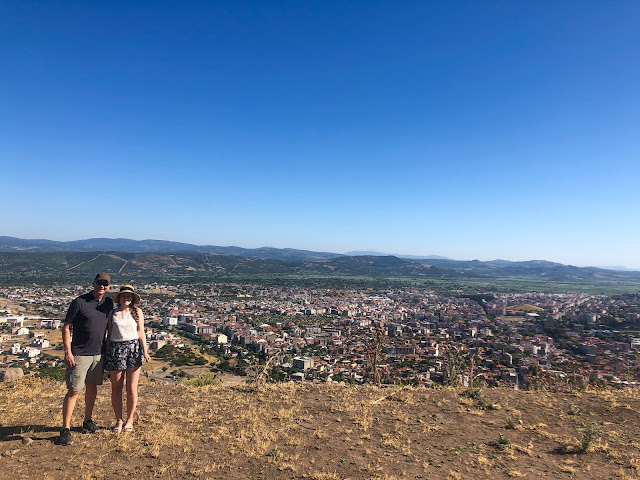