I had no idea Judah knew of the cherry tree in our yard. But after spending the night here with me, we went out to swing while Asher was down for his morning nap.

While swinging and happily chattering on the swing, he suddenly exclaimed, "Nonnie! Go look cherries in Papa tree!" Maybe Dave had showed them to him on a different day!

Off we went to check them out. 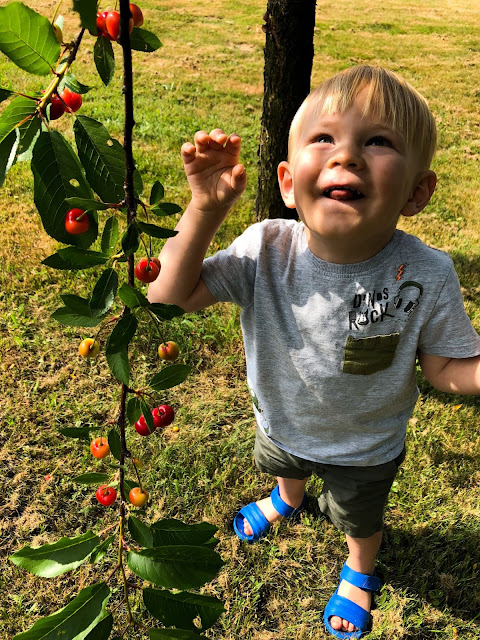 I'm glad he was so cheery since this is how our day started five hours earlier. 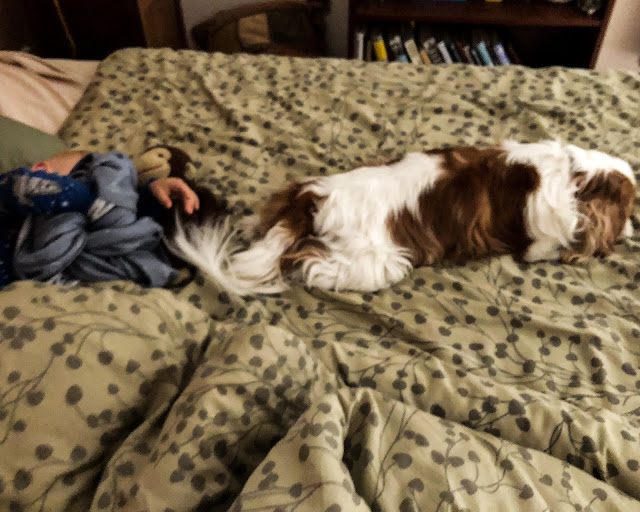 I heard a little somebody in the hallway outside my room at 4:45 this morning. 😲 I managed to scoop him up and bring him into my bed, but it was another hour before he was back asleep. I'd forgotten how it feels to be kicked nudged in bed by a toddler!!

Kaylee kept him company once he fell asleep at 5:45; I never went back to sleep which was a good thing since Asher was awake a half hour later!

Thankfully Asher went down for an early nap, and Judah was his cheery self as we explored the cherry tree in our yard. 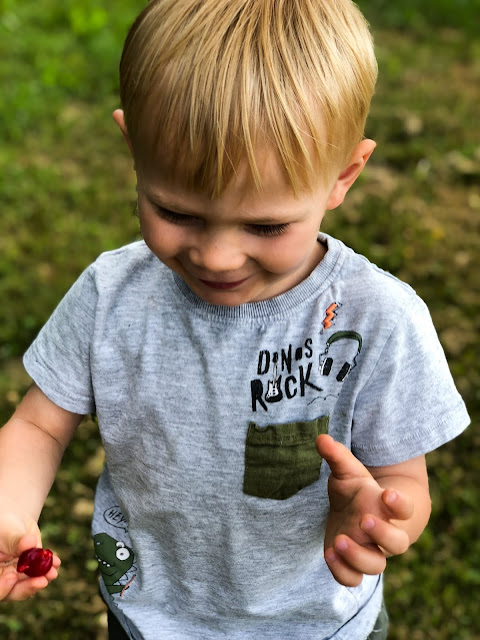 He was completely fascinated by being able to pick and eat them right off the tree. 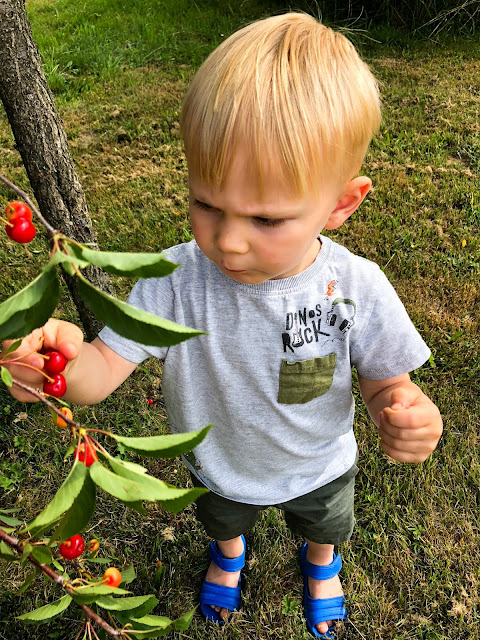 Of course he quickly found out there are pits, so asked me to take them out before he went on to eat them! 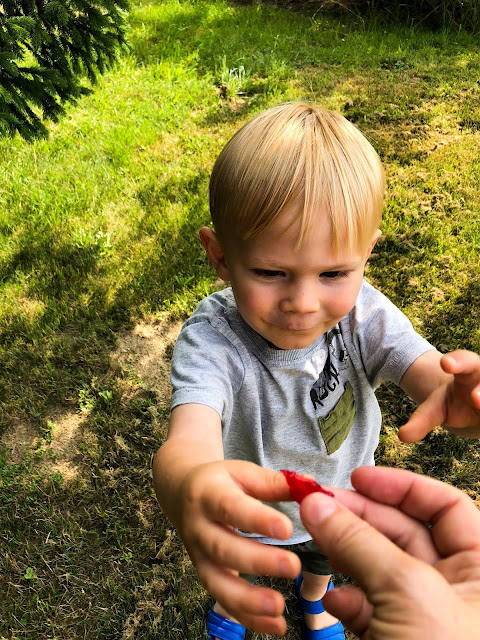 Oh the fun of picking those ripe beauties (though they're sour, since they're pie cherries!). 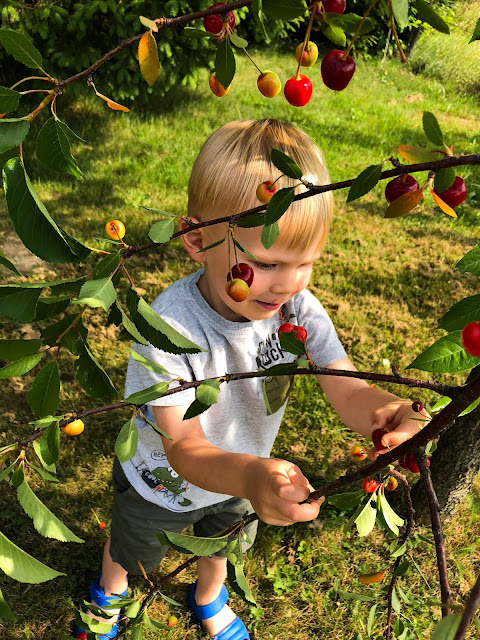 Needing to limit his intake (how many cherries can go into the tummy of a two and a half year old without a bathroom incident?!), we brought the last batch over to our bench and table to enjoy them. 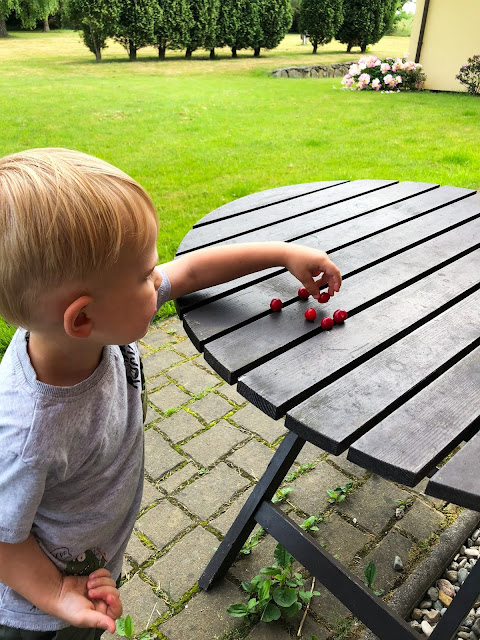 Don't you love it when it takes nothing more than a ripe cherry to make a toddler happy?! 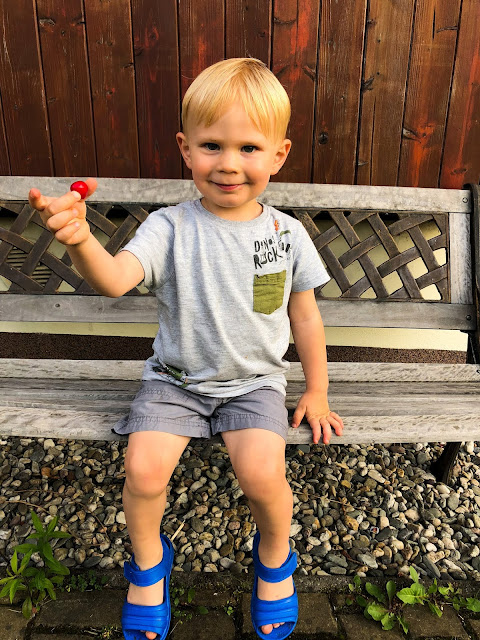 That totally made both of our days!!!! 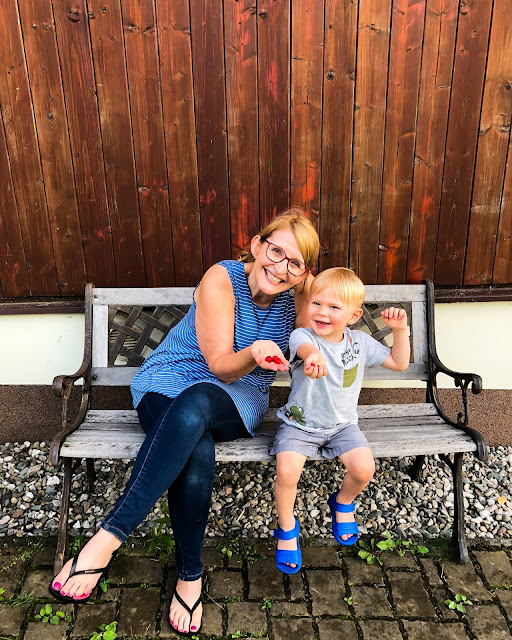 One last funny side note of the day.

He and I were on our porch playing while Asher still napped, and I brought him some dried cranberries -- not so he could eat them, but so he had something to put into his dump truck! "Me need sumpin' dump, Nonnie!"

I didn't know if he would like them or not since they're also kind of sour, but they eventually found their way into his happy mouth. Though not without sound effects. 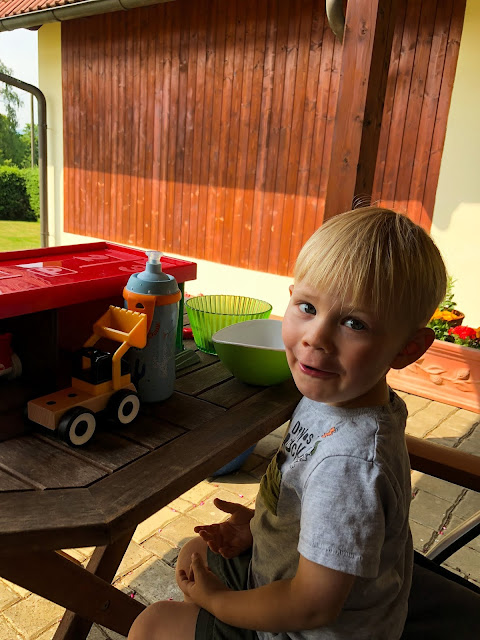 I really don't know how to replicate his funny grunts (though did it get on video, which is a hoot!), but needless to say, the more Nonnie laughed at them, the funnier he thought it was, and the more he did it.

Hours later...like 10 hours! We were sitting at the dinner table with Claire, Asher, Tyler and Lara (who had just returned from their anniversary trip). He was happily eating Chinese take-out that they'd brought for us when all of a sudden he said in the funniest little two and half year old voice, "HEY NONNIE!!"

And then he grunted!

I don't know what made him remember that funny moment hours earlier in our day. But it was like he was remembering our own private joke and wanted to laugh about it again.

Without knowing it was our private joke, Tyler gently "shushed" him and said, "We don't let him do that".